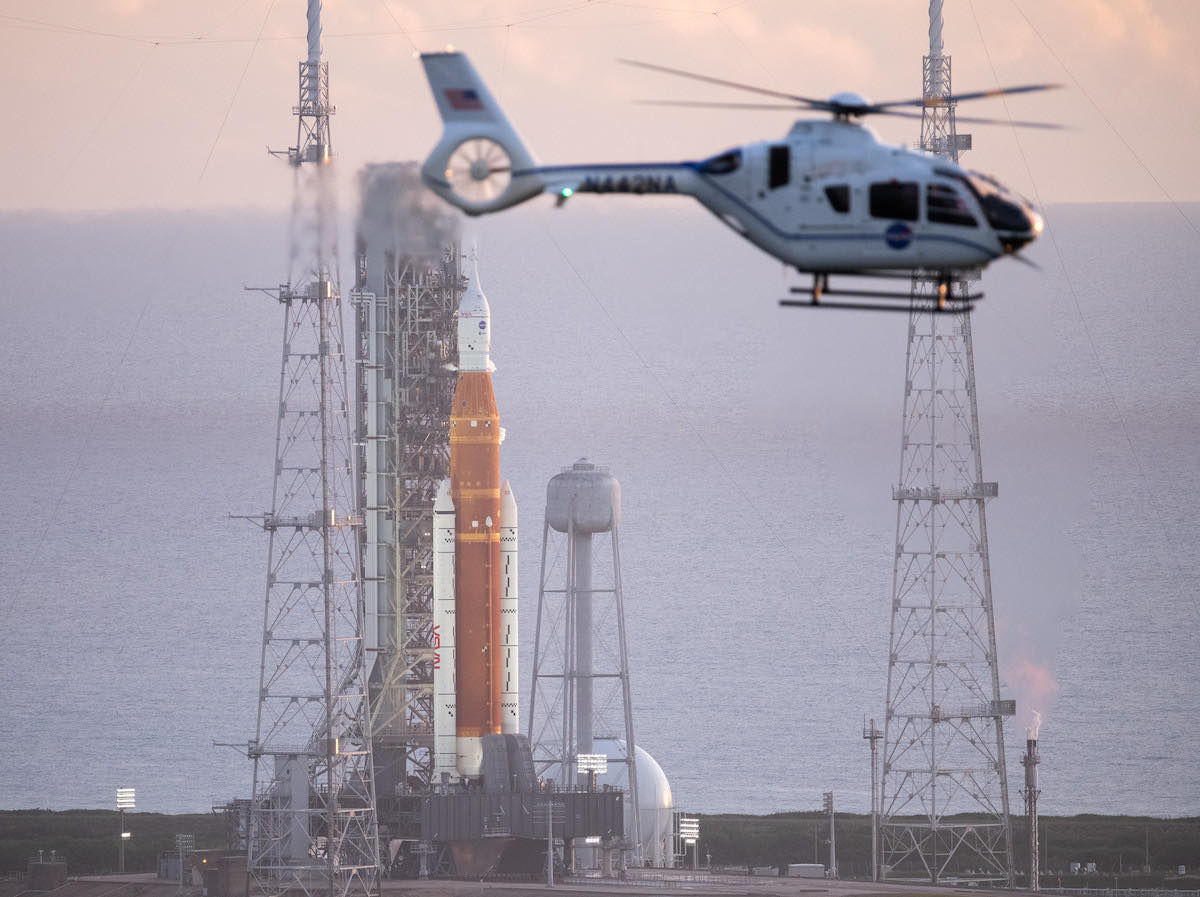 A NASA security helicopter flies near the Artemis 1 moon rocket on Launch Complex 39B at the Kennedy Space Center during a launch attempt Monday morning. Credit: NASA/Joel Kowsky

Engineers fueled the Space Launch System moon rocket for blastoff Monday on NASA’s long-overdue Artemis 1 test flight, but stormy weather, brief indications of a hydrogen leak, trouble cooling one of the four main engines and then a valve glitch forced managers to call off the countdown.

“The combination of not being able to get engine three chilled down and then the vent valve issue that they saw … caused us to pause today,” said mission manager Mike Sarafin. “The team was tired at the end of the day, and we just decided that it was best to knock it off and to reconvene tomorrow.”

While it’s not yet known what will be needed to resolve the engine cooling issue and the vent valve problem, the team is preserving the option of making another launch try Friday, at 12:48 p.m. EDT, the next available opportunity.

An initial forecast calls for a 60 percent chance of violating flight safety rules due to clouds, electrical activity and flight through precipitation.

Even so, Sarafin said, “we’re gonna play all nine innings here, we’re not ready to give up yet.”

The launch scrub was a frustrating disappointment for more than 25,000 NASA workers, dignitaries and other guests gathered at the Kennedy Space Center, including Vice President Kamala Harris, to witness the historic maiden launch of the agency’s most powerful rocket.

It was equally disappointing for the hundreds of engineers and technicians who have labored for months to ready the giant moon rocket for takeoff. Instead, the countdown revealed a fresh problems for engineers to evaluate after exhaustive work to resolve problems that developed during four earlier fueling tests.

NASA was taking no chances with the $4.1 billion rocket, the linchpin in its plans to return astronauts to the moon in the next three years as part of the agency’s Artemis program.

After repeated attempts to resolve the engine cooling issue were unsuccessful, Launch Director Charlie Blackwell-Thompson called off the countdown at 8:35 a.m. EDT, two minutes after the two-hour launch window opened at 8:33 a.m.

Based on the constantly changing positions of the Earth and moon, NASA managers only expected three chances to get the SLS off the ground — Monday, Friday and early next week — before the rocket would have to be hauled off the pad and back to the iconic Vehicle Assembly Building for servicing.

After that, launch likely would slip into late September or, more likely, October. But no decisions will be made until after engineers have time to review data and pinpoint what needs to be repaired or adjusted.

“Awww man, launch scrubs are a normal part of spaceflight, but I sure was excited for this one,” tweeted former astronaut Jack Fischer. “With a rocket this awesome you don’t want to take any chances. It’s been 50 years … what’s another wee bit of waiting if we’re writing history?”

The Artemis 1 test flight is intended to verify the rocket’s ability to propel Orion capsules into Earth orbit and then onto the moon. Engineers also will test the crew ship’s myriad systems in deep space and make sure its heat shield can protect returning astronauts from the 5,000-degree heat of re-entry.

NASA plans to follow the uncrewed Artemis 1 mission by launching four astronauts on a looping around-the-moon flight in 2024, setting the stage for the first astronaut landing in nearly 50 years when the first woman and the next man step onto the surface in the 2025-26 timeframe.

But first, NASA must prove the rocket and capsule will work as planned and that begins with the uncrewed Artemis 1 test flight.

The countdown began Saturday and proceeded smoothly until late Sunday night when offshore storms with rain and lightning moved within about six miles of launch complex 39B, violating NASA safety rules. 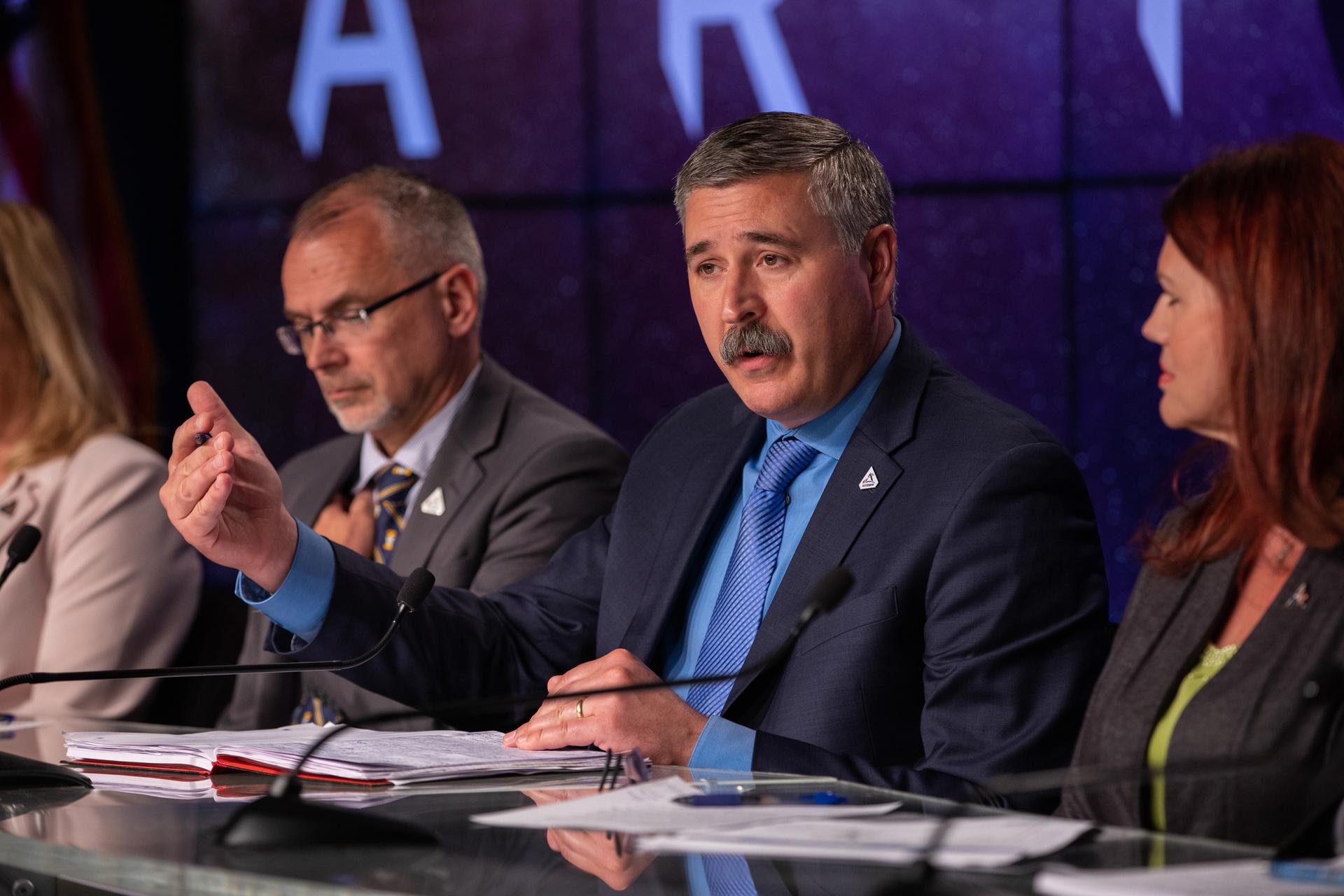 After a 55-minute delay, the six-hour fueling process finally got underway at 1:14 a.m. as engineers, working by remote control, began pumping 730,000 gallons of supercold liquid oxygen and hydrogen fuel into the SLS core stage, clearing the way for another 22,000 gallons to be pumped into the upper stage.

During a transition from “slow fill” to a 10 times faster rate, sensors detected higher-than-allowable concentrations of hydrogen in a housing around an 8-inch umbilical that delivers propellants to the base of the core stage. That indicated a leak in a quick-disconnect fitting.

After reverting back to slow fill and allowing temperatures to equalize across the plumbing, fast fill was restarted and this time around, there were no issues.

But then another issue surfaced that engineers already were concerned about.

When the core stage hydrogen tank was topped off, propellants were diverted to the four RS-25 engines at the base of the core stage to cool, or thermally condition, them to the ultra-low temperatures they’ll experience at the high flow rates needed for ignition.

A 4-inch quick-disconnect fitting in the cooling system leaked during a June 20 fueling test. Like the 8-inch valve before it, the fitting was repaired during another stint in the Vehicle Assembly building, but Monday was the first time it was again exposed to cryogenic hydrogen at minus 423 degrees Fahrenheit.

It did not leak this time around, but engine No. 3’s plumbing did not reach the desired temperature. That prompted additional troubleshooting, including attempts to increase pressure in the tank to boost the flow of hydrogen.

That’s when engineers ran into an unexpected problem: a vent valve at the top of the hydrogen tank did not operate as expected, showing signs of leakage. At that point, mission managers threw in the towel.

“We need the team to get rested and come back tomorrow and we’ll see what the data tells us,” Sarafin said.

NASA’s Mission Management Team planned to meet Tuesday to review the data and develop plans for what to do next.