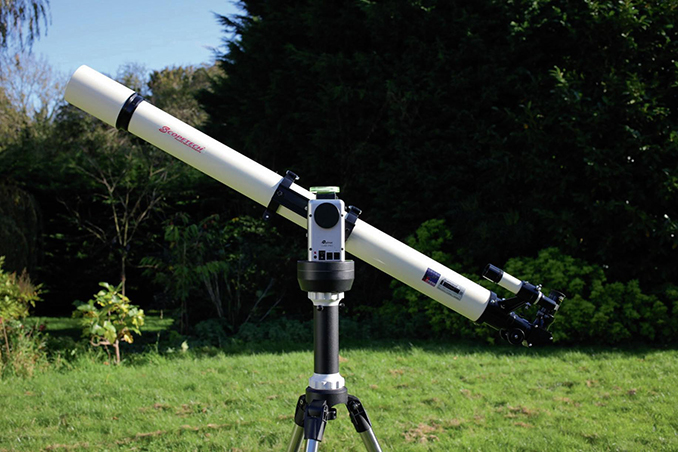 The ScopeTech STL-80A Maxi, photographed here on the author’s iOptron CubePro mount, epitomises what a refractor should look like. All images: Steve Ringwood.

Although exotic Extra-low Dispersion (ED) glasses have enabled triplet apochromatic refractors to invade the chromatic aberration-free province hitherto dominated by reflectors, it should be remembered that doublet achromatic refractors have long been achieving pretty much the same success by employing high focal-ratios.

ScopeTech’s STL-80A Maxi, f/15 refractor, a review model of which was provided by First Light Optics, continues in that fine tradition.

It’s certainly not one of those modern refractors that are attempting to fit into a shoebox. Out of its roomy packing comes a sleek, gleaming white tube fully 1.25 metres long. It comes fitted with a tube ring/dovetail unit that has sufficient space for a hand to pass through, therefore doubling as a handle.

Most of the testing was assisted by my GoTo alt-az iOptron CubePro mount, with occasional ‘support’ from ScopeTech’s Mount Zero, which I reviewed in the October 2021 issue of Astronomy Now – although the latter is not a GoTo (yet!).

My first job (in daylight) was to fit and align the 6 × 30mm finder. This was straightforward enough, although the finder tube is clamped by a single screw at one end and collimated by three at the other. I always find this system unduly fiddly (as I did this time) and much prefer the paired three-screw systems – which generally allow greater flexibility and accuracy. For the additional manufacturing cost of just three small screws, why not?

As dusk fell, Jupiter was the first to show itself in a deepening turquoise sky. I chose a 40mm orthoscopic eyepiece to begin with, wanting a low power initially to get a stand-back view of the Jovian system. This delivered a magnification of 30×, which yielded a very pleasant view of all four Galilean moons and a bright, sharply defined planetary disc that (although glaringly bright) was already horizontally sliced by equatorial belts.

With the seeing conditions reasonably good, I pitched the power up to 92× with a 13mm superwide Plössl, at which point the telescope began to deliver worthwhile detail. The eyepiece’s 84-degree apparent field translated into a real-sky view of almost one degree, meaning that I could still encompass planet and moons, with Jupiter now displaying clean belt detail.

At 200× using a 6mm eyepiece, I was more than happy with the amount of detail being elicited. I was pleased to see that the subtle pastel grey-blues and rusty browns of Jupiter’s belts were well shown.

Of course, it must be added here that one of the advantages of a relatively long-focus refractor of 1,200mm focal length, compared to a typical apochromat of 400mm, is that the same eyepiece will supply higher power while retaining comfortable eye relief. For instance, the ScopeTech’s focal length of 1,200mm will deliver a magnification of 60× through a userfriendly 20mm eyepiece, yet with a 400mm instrument you would need to squint through the relatively smaller portal of a 7mm eyepiece to approach the same power. 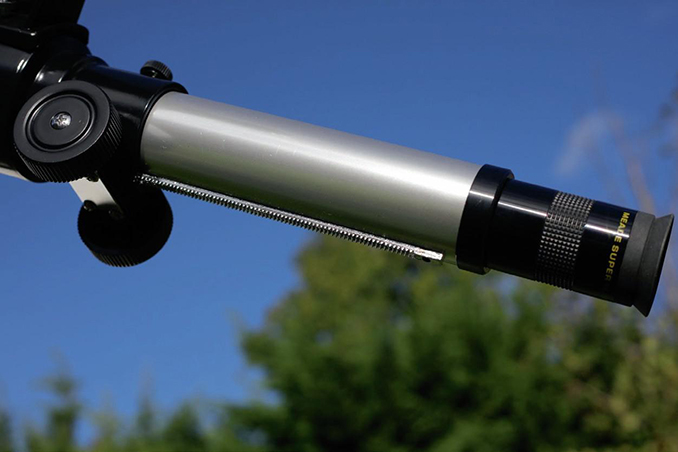 The rack-and-pinion focus rack, shown at full extent. There was no discernible droop or loss of traction. 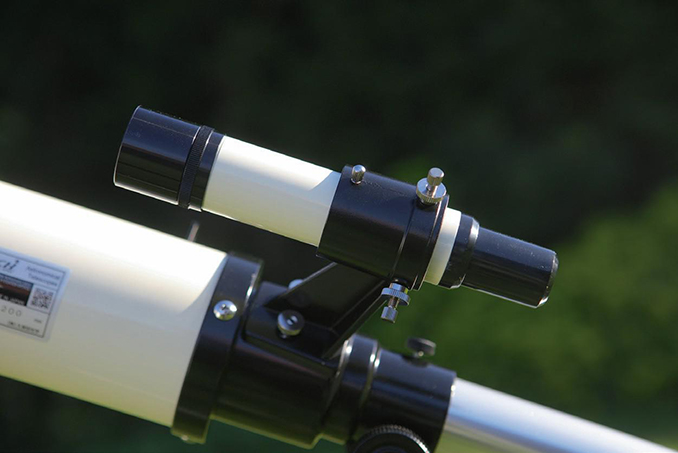 The finderscope is a 6 × 30mm device held in a singleplane screw-collimation tube. 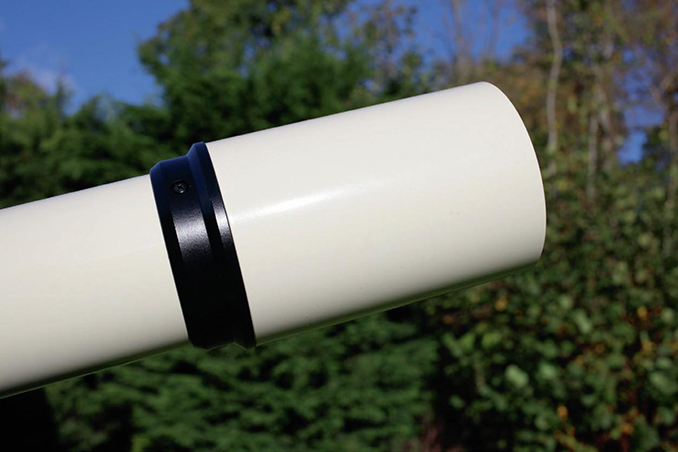 The dew tube is fixed. For long telescopes, a collapsing hood is not part of the ethos. 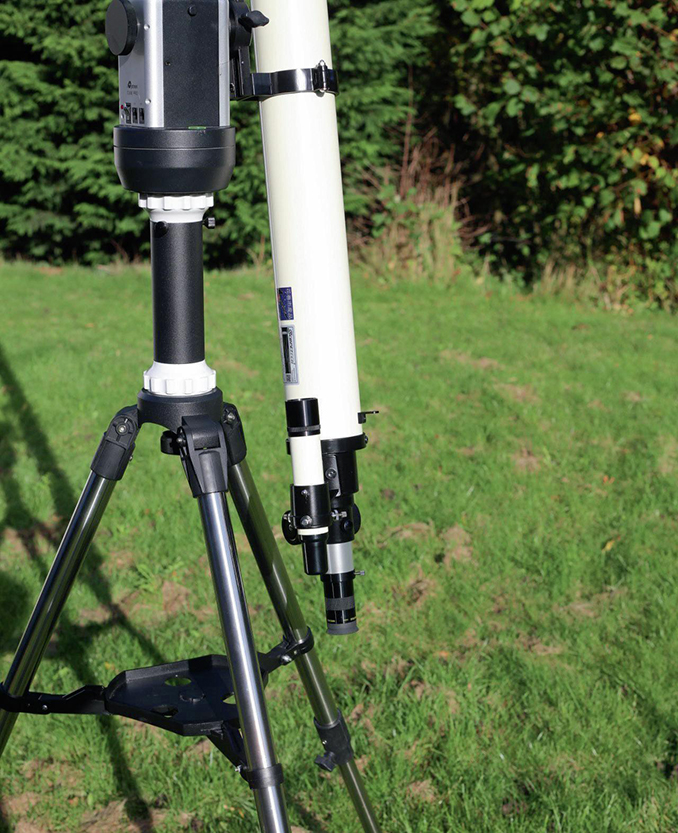 A consequence of the long tube is that it may necessitate the use of a star diagonal for ease of making zenith observations.

A 4mm eyepiece at 300× was still rewarding, but probably an option retained for occasional nights of best seeing. In trawling through my eyepiece selection, I found that an optimal high power was delivered by an 8mm eyepiece – at 150×. This closely matches the general guiding maxim that greatest useful magnification equates to about 50× the aperture in inches.

Although it was long past its August opposition, I caught a low-elevation Saturn before it made its escape behind nearby rooftops. Saturn never disappoints and this telescope is an ideal instrument for it. It happily accepted use of my 6mm eyepiece, giving 200×. The view was stunning. The Cassini Division was clearly delineated, as was the shadow of the rings on the planet and that of the planet on the rings. Titan of course hovered in close attendance, helping to give the field that dramatic 3D feel that Saturn supplies so well.

The ScopeTech’s focal length of 1,200mm will deliver a magnification of 60x through a user-friendly 20mm eyepiece

Yet a long tube can have its drawbacks. With potentially greater momentum at either end than with a short instrument, vibration can be a problem. Those considering a purchase of this f/15 need to ensure that a mount’s payload specification considerably exceeds the nominal 2.8-kilogram total weight (with the tube rings and finderscope added) of the ScopeTech STL-80A Maxi. 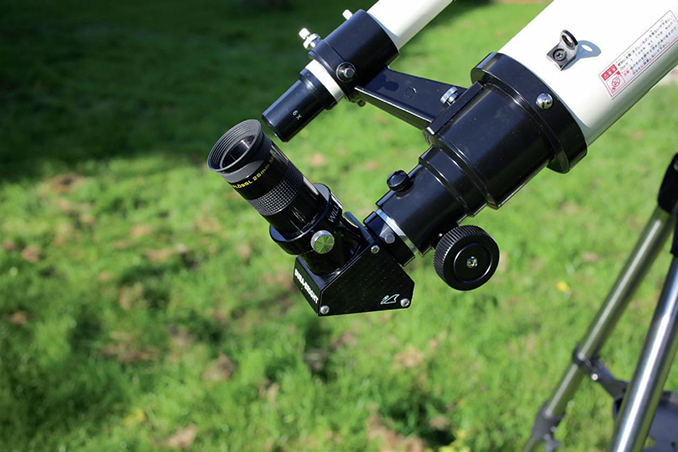 However, some eyepieces may not reach focus if used with a star diagonal on the ScopeTech STL-80A Maxi.

Yet despite showing its prowess at providing excellent planetary detail, I was interested to discover how successful it might be at the other end of the observing scale, on deep-sky objects –a field of observation almost contrary to this telescope’s natural prey.

I brought the telescope back to a wider field of about 1.5 degrees with my 40mm orthoscopic eyepiece, and turned my gaze high towards the north-east and the Pleiades (M45). The eyepiece could not encompass the almost two-degree span of this cluster, but what it did show was still breathtaking. Most of the major components were captured and stood in the field sharply defined against a dark backcloth.

Of course, almost overhead in the autumn sky hovered the deep-sky magnet of the Andromeda Galaxy (M31). With the long tube pointing almost to the zenith, the intervention of a star diagonal was now a requirement in order to avoid a subsequent visit to a chiropractor. I am pleased to say that even at f/15, the Andromeda Galaxy’s core was bright and condensed, with a misty ellipse falling away towards the periphery of the field. It was a great view.

However, deployment of the diagonal did reveal an oddity. A telescope of this focal length will, by its nature, occasionally need eyepieces to be used with a star diagonal (especially for zenith observations), unless the tube is installed on an unusually high mount. Yet I found by experiment that some of the twenty-one 1.25-inch eyepieces that I had at my disposal (of all designs, focal lengths and ages) were unable to be racked in far enough to achieve focus with the star diagonal in place. With the least atmospheric interference, zenith observations can be the best available, but I had no wish to drop to my knees or lie on the ground to access them. Is this lack of infocus betraying a Japanese aversion towards star diagonals? Perhaps. But for a wider market this aspect needs to be reviewed.

If this were my purchase, I would probably shave one to two inches from the main tube and refit the focuser – but obviously this was not an option on a review item! I circumvented the problem by inserting my star diagonal first into a Barlow lens – which has the effect of extending back-focus, but at the expense of increasing effective focal length and therefore magnification.

From the constellation of Andromeda, I swept westwards across the sky to alight on the Ring Nebula (M57), still riding high despite the advance of autumn. At low power it was tiny, but intense.

I increased its scale by boosting it to a ‘planetary’ power of 150×. Although not a ‘light bucket’ by any means, the telescope’s 80mm aperture was still able to pull sufficient light in to clearly depict the nebula’s smoke ring with good contrast.

While in Lyra, I skipped to the northern part of the constellation and alighted on epsilon Lyrae to see how well the ScopeTech would perform on another of a long refractor’s classic strengths, that of close double-star observation. Epsilon Lyrae is a four-star system consisting of two pairs (ε 1 and ε ) set at an easy separation of about 3.4 arcminutes, but with the components divided by 2.6 and 2.3 arcseconds, respectively. At a power of 150×, both pairs were cleanly split.

As a personal treat, I moved from Lyra to nearby Cygnus to visit Albireo (delta Cygni). It is a fairly wide and unchallenging double, but richly rewarding. The ScopeTech did not disappoint, showing the highly contrasting blue and yellow components wonderfully. As for star images generally? Although the ScopeTech STL-80A Maxi is a standard achromat and not an apochromat, the correction for chromatic aberration is extremely good and I found the faint trace of residual colour to be barely noticeable on any object.

Some days later, an evening crescent Moon presented the ideal opportunity to test out the telescope on lunar detail. Beginning with my 40mm orthoscopic, it gave a great view of the phase, occupying just a sixth of the field. I quickly moved to a 20mm superwide Plössl, which still enfolded the Moon in a comfortable degree-wide field, but drew it closer. The most prominent feature of a crescent Moon is Mare Crisium, but beneath it, on the western shore of Mare Fecunditatis, I spotted the 133-kilometre-wide crater Langrenus. It begged for more power so I gave it some. Still receiving low enough sunlight to highlight relief, at 150× its terraced wall and jumbled central peak were shown in great detail.

Further east, the jagged ramparts of Mare Nectaris were plunging deeply into the unlit terminator. As a challengingly stark light/dark interface, this bright, ragged scar into the darkness demonstrated a complete lack of colour fringes, attesting to the fine quality of the optics. With fair conditions prevailing, I further confirmed the telescope’s ability by using a Nagler 4.8mm (at 250×) to elicit even more lunar detail. 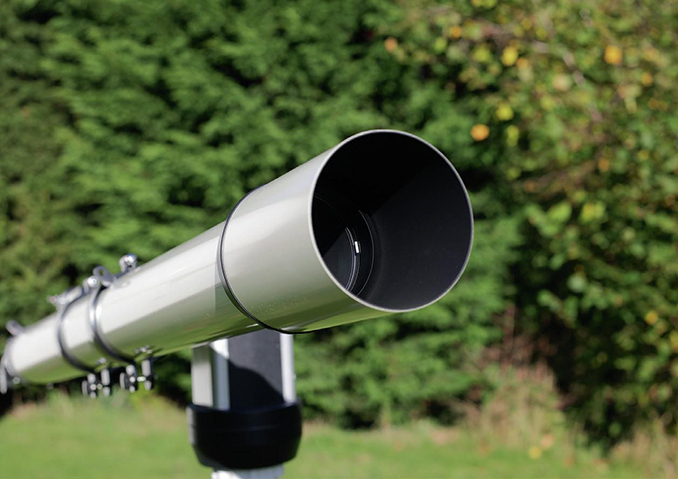 The lens is an 80mm, f/15 achromat of the Fraunhofer design. 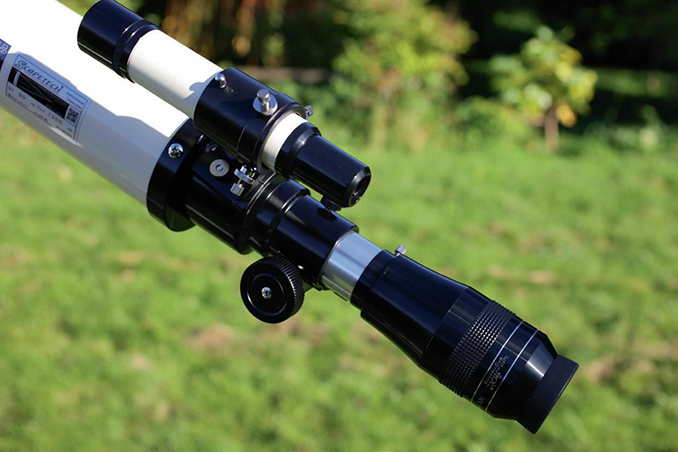 The ScopeTech STL-80A Maxi will happily accommodate wide-angle eyepieces, such as this 100-degree Lunt.

The origins of this model lie in the discovery and restoration of a Fraunhofer 80mm, f/15 telescope made in the achromatic refractor’s age of romance.

Indeed, it has a flavour of the Unitron refractors that were exported from Japan in the 1960s. Though rooted in the past, this classically designed telescope offers advantages that its rather abbreviated forebears cannot match, not least impressive correction of chromatic aberration and spherical aberration.

Steve Ringwood is a regular contributor to Astronomy Now