There’s an ocean of human-made garbage floating through Earth’s seas. From plastic straws to beverage bottles and food wrappers, the ocean waters are this planet’s fastest-growing junkyard. Some of the plastic gets ground into little beads called microplastics, and ends up in the food chain, with humans at the top. For that reason, and many others, the European Space Agency is tracking ocean-bound plastics through the auspices of the MARLISAT project. It’s one of 25 efforts created to identify and trace marine litter as it moves through the world’s waterways. The ultimate goal is to help countries reduce ocean litter, particularly plastics.

The existence of plastics in the ocean isn’t some far-fetched scare story. It’s verifiable fact, based on data that shows what’s floating in our oceans. People who work or vacation at sea and who live along coastlines easily spot the most obvious trash collections. The Great Pacific Garbage Patch is probably the best-known collection of trash, but there are others. In addition, satellites are tracking the stuff from space.

There’s a lot of trash out there. According to the European Space Agency, the equivalent of a truckload of plastic makes its way into the oceans every minute. The U.S. National Oceanic and Atmospheric Administration (NOAA) states there is no part of the world left untouched by ocean debris. Water-borne garbage is widespread and it affects all the world’s waterways and oceans. That’s the bad news. The good news is that MARLISAT and other projects give a clearer view of the litter and where it goes.

Figuring out where ocean garbage goes requires tracking capability throughout the ocean systems. Garbage in the seas takes complex routes, depending on the currents it encounters. Researchers took advantage of a set of complex currents off the coast of Indonesia to test prototype trackable wooden buoys. The French organization CLS (short for Collecte Localization Satellites) developed and released them in late May, 2022. The buoys will spend the rest of this summer traveling the currents, as part of a project developed by the French space agency CNES. It oversees satellite-based tracking of tagged marine animals, buoys and fishing fleets. The principal trackers are part of the Argos geopositioning system, which performs satellite navigation fixes and returns them to CLS via satellite link. 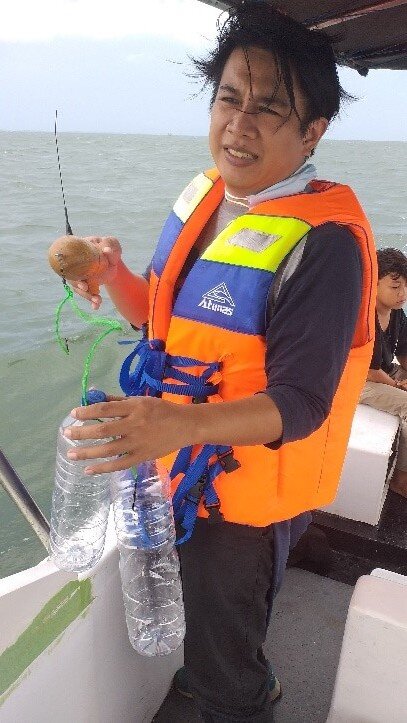 The MARLISAT project uses tracking buoys and Earth observation imagery from space to detect sources of plastic and other garbage in the ocean. The data collected help forecast the motion of this stuff and where it tends to accumulate. An ocean drift model called MOBIDRIFT, developed by CLS, helps predict the location of ocean garbage as it moves around the globe. In addition, the data and satellite images are used in a machine learning algorithm being developed to detect plastic accumulation along beaches and ocean hotspots.

“The strength of this project is the combination of satellite observations, in situ data and numerical modelling,” comments Marc Lucas, Senior Oceanographer at CLS. “It is also great to have worked on a more sustainable type of Argos beacons, with wood used for the casing. As scientists, we have a duty to work towards a more sustainable approach to science.”

Why Worry about Plastic Garbage at Sea?

The massive accumulation of trash at sea is more than unsightly and unsanitary. Some materials, such as plastic drink collars, straws, and bottles, get eaten by larger animals (whales and sharks, for example). Eventually, those animals die with bellies full of undigested plastic, and other animals strangle on plastic materials. 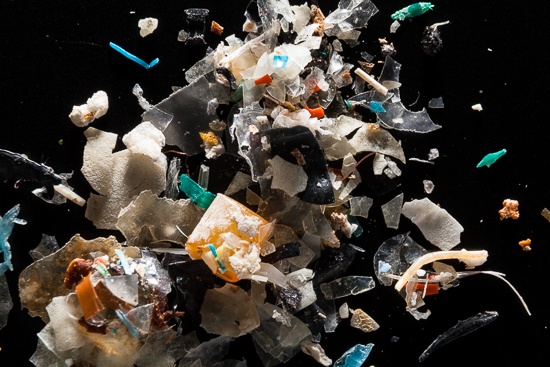 These microplastics were collected by the National Oceanic and Atmospheric Association Marine Debris Program in 2011 via a manta trawl in four tributaries feeding into the Chesapeake Bay. Courtesy NOAA.

The massive junking of plastic in the ocean contributes to changes in the food chain that stretch from the ocean to our dinner plates. It’s not hard to figure out that pathway. Plastics dumped at sea don’t biodegrade. Instead, wave action tears them to little bits. Shellfish and other species then eat these microplastic pieces. As a result of this contamination, the chemicals used to manufacture the plastics pass along to other animals up the food chain. Ultimately, humans eat some of these animals, and we, too, are contaminated with the same chemicals. These are likely toxic, depending on how much we eat, the type of plastic polymer ingested, and other factors.

The MARLISAT project to track plastic and other garbage in the ocean should help countries and companies as they focus on cleaning up the oceans and coastlines. Addressing the problem of plastic waste in the oceans is a worldwide effort. In addition to ESA, other space agencies, such as NASA, have launched Earth-observing systems focused on the oceans. Learning more about how our waterways and seas are affected by human activity is an important goal. It’s being made easier now, thanks to space-based tracking and data-gathering systems.

Tracking Marine Plastic Drift from Space
A Guide to Plastic in the Ocean
Marine Debris
The Discovery Campaign on Remote Sensing of Plastic Marine Litter
Garbage Patches: How Gyres Take Our Trash Out to Sea

The post Satellites are Tracking Rivers of Garbage Flowing Across the Oceans appeared first on newsastronomy.com.