Long before our Sun began to form, stars were dying in our part of the galaxy. One of them exploded as a supernova. The catastrophe created minute grains of dust and the force of the explosion blasted through a nearby cloud of gas and dust. That action seeded the cloud with “alien” materials from the dead star. The shock wave from the supernova also caused the cloud to collapse in on itself to create the Sun. The “leftovers” of the cloud became the planets, moons, rings, comets, and asteroids of our solar system.

Asteroid 162173 Ryugu contains grains of that ancient material from the long-gone star. The Japanese Hayabusa2 mission explored Ryugu and returned samples of those dust grains for scientists to analyze. They provide hints about that star and what conditions were like before the Sun was born.

Ancient stardust isn’t a surprise to astronomers. It exists in primitive extraterrestrial grains. Through chemical analysis, astronomers can figure out when they formed as a star aged and died. Most of them are oxygen-rich silicates or oxides or carbon-enriched grains. The silicates are somewhat rare. That’s because chemical weathering or other processes on an asteroid (or on Earth) destroy them. So, if they’re found at all, they’re usually in a sheltered portion of an asteroid.

Carnegie scientists Jens Barosch and Larry Nittler worked with the Hayabusa2 Initial Analysis Team to determine the chemical makeup of the grains. They published their results in a recent paper in Nature Letters. It describes the dust grains and what they mean for our understanding of pre-solar system events. Essentially, the team did a series of microanalytical tests on the Hayabusa2 samples. Then they compared the results with similar tests done on carbonaceous chondrites (primitive meteorites) found here on Earth.

The team detected samples of “pre-solar grains” in the Ryugu materials, including carbonaceous grains. There was also a surprise. Bits of the samples were fragile silicate material, which provides a clue to their formation and to conditions they experienced on the asteroid.

On the left is a secondary electron image of a Ryugu particle pressed into gold foil in which two silicon carbide presolar grains were detected, as indicated by white arrows on the center and left images. Courtesy Jens Barosch.

“Different types of presolar grains originated from different types of stars and stellar processes, which we can identify from their isotopic signatures,” Barosch explained. (Isotopes are versions of elements with the same number of protons, but a different number of neutrons. Their presence in the dust samples give hints about when they formed and stellar activity occurring at the time.) “The opportunity to identify and study these grains in the lab can help us understand the astrophysical phenomena that shaped our Solar System, as well as other cosmic objects.”

Scientists sort presolar grains into groups that link them to the types of stars that created them. Many grains with oxygen isotopes likely formed in the winds of asymptotic giant branch (AGB) stars with different masses and/or metallicities. They could also form in supernovae. Silicate grains come from various sources: AGB stars ejecta of novae or supernovae. Presolar graphite grains probably come from AGB stars and supernovae. 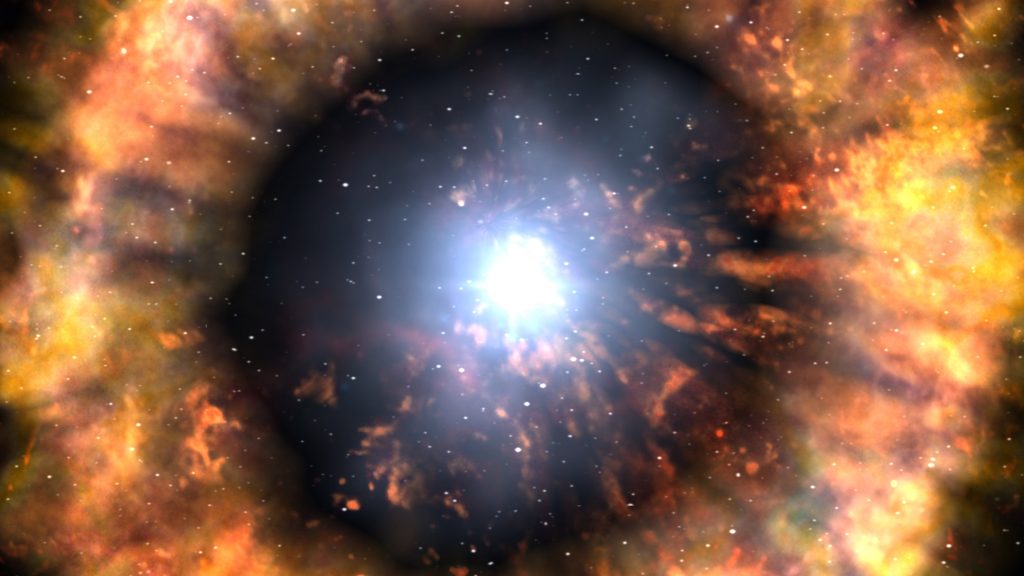 Artistic impression of a star going supernova, casting its chemically enriched contents into the universe. An event like this not only creates dust grains but spreads through nearby space, where they can get swept up in star and planet formation processes. Credit: NASA/Swift/Skyworks Digital/Dana Berry

“The compositions and abundances of the presolar grains we found in the Ryugu samples are similar to what we’ve previously found in carbonaceous chondrites,” explained Nittler. “This gives us a more complete picture of our solar system’s formative processes that can inform models and future experiments on Hayabusa2 samples, as well as other meteorites.”

Ryugu is a near-Earth asteroid about 1 kilometer in diameter, discovered in 1999. It’s a potentially hazardous asteroid in the Apollo group. Ryugu orbits the Sun once every 16 months and its path intersects Earth’s. At its closest, it can get as close as a quarter of the Moon’s distance from our planet.

This asteroid is also a perfect candidate to help scientists understand the pre-solar nebula and the history of asteroids. It’s part of an asteroid family left over from the collision of two larger objects. That event sent shards spinning through space. Scientists suspect that its larger parent body had internal heating. Ryugu is round, but with a bulge at its equator, and its surface is covered with boulders. Some have even suggested that it’s a dead comet.

Hayabusa 2 went to Ryugu to sample its surface. Based on what the spacecraft found, scientists now classify Ryugu as an orbiting rubble pile. That means it’s loosely bound together and its volume is at least “half empty”. The surface is quite porous and has 77 impact craters. Ryugu created a new small one when it injected a small copper mass into the ground to study subsurface materials.

Other highlights of the mission include the deployment of a small surface rover called MASCOT. Three were three other rovers went to explore different parts of the surface (although one failed). The surface sample retrieval part of the mission ended in February 2019, and later that year Hayabusa2 began its journey back to Earth with its precious eons-old samples for study. Detailed studies of the materials revealed more than the presence of alien dust grains. There are also tantalizing hints of amino acids (life’s building blocks) in the asteroid’s regolith.

The post Samples From Asteroid Ryugu Contain Bits That Came From Outside the Solar System appeared first on newsastronomy.com.