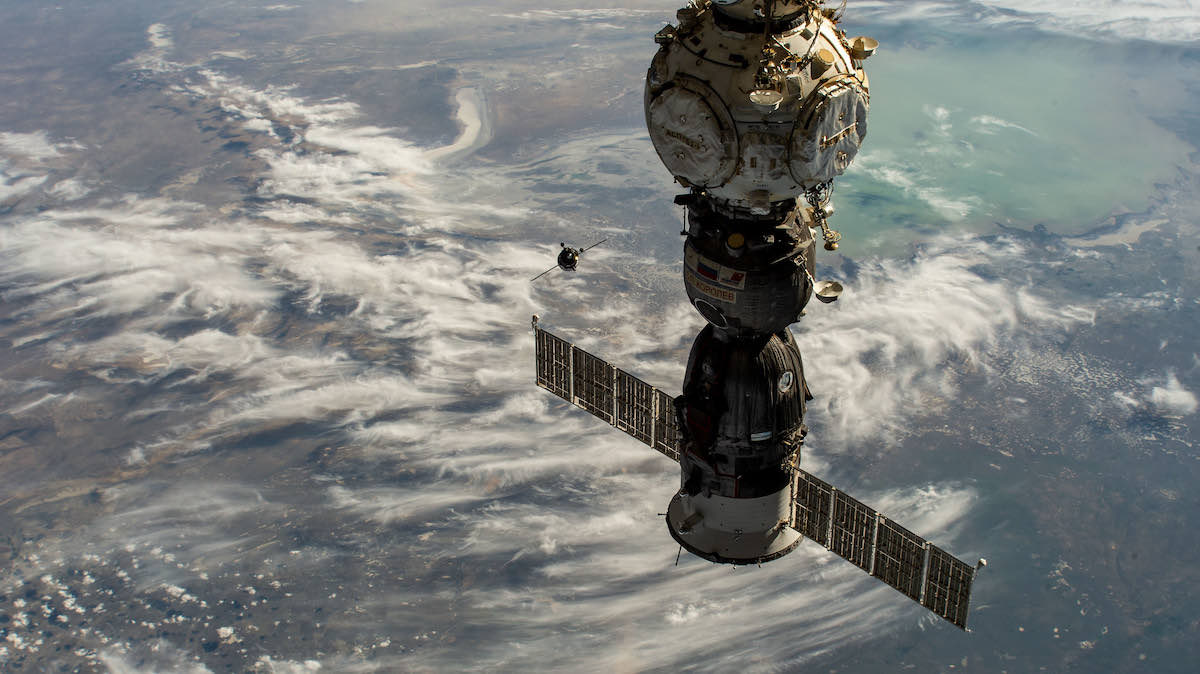 A Russian Progress cargo freighter approaches the International Space Station in the background, while a Soyuz crew ferry spacecraft is docked to the Prichal module on the Russian segment of the complex. Credit: NASA

Russia will pull out of the International Space Station project after 2024, the new director of the Russian space program said Tuesday, but no firm dates or plans were revealed and it was not immediately clear what, if anything, might change in the near term.

Yuri Borisov, who was named earlier this month to replace Dmitri Rogozin as head of Roscosmos, the Russian space agency, said after a meeting with President Vladimir Putin “the decision to leave the station after 2024 has been made.”

By that time, he added, Russia will be ready to begin building an independent orbital outpost. But it wasn’t clear what “after 2024” might actually mean in terms of when a withdrawal might start or be complete.

NASA Administrator Bill Nelson said the agency “is committed to the safe operation of the International Space Station through 2030, and is coordinating with our partners.”

“NASA has not been made aware of decisions (to withdraw) from any of the partners, though we are continuing to build future capabilities to assure our major presence in low-Earth orbit,” he said.

White House Press Secretary Karine Jean-Pierre said while no official notice has been received, “we are exploring options to mitigate the potential impacts on the ISS beyond 2024 if Russia does withdraw. For our part, we remain committed to working with ISS partners to ensure the safe operation of the ISS and the astronauts who are on board.”

Before his abrupt departure, Rogozin made repeated threats about pulling out of the project in response to western sanctions in the wake of Russia’s invasion of Ukraine. But Rogozin’s bellicose tweets lacked any concrete endorsement from Putin.

John Logsdon, a historian and space policy analyst, said Tuesday he took Borisov’s comments “a bit more seriously, because it was the new guy in the context of a meeting with Putin. You don’t do those things casually.” 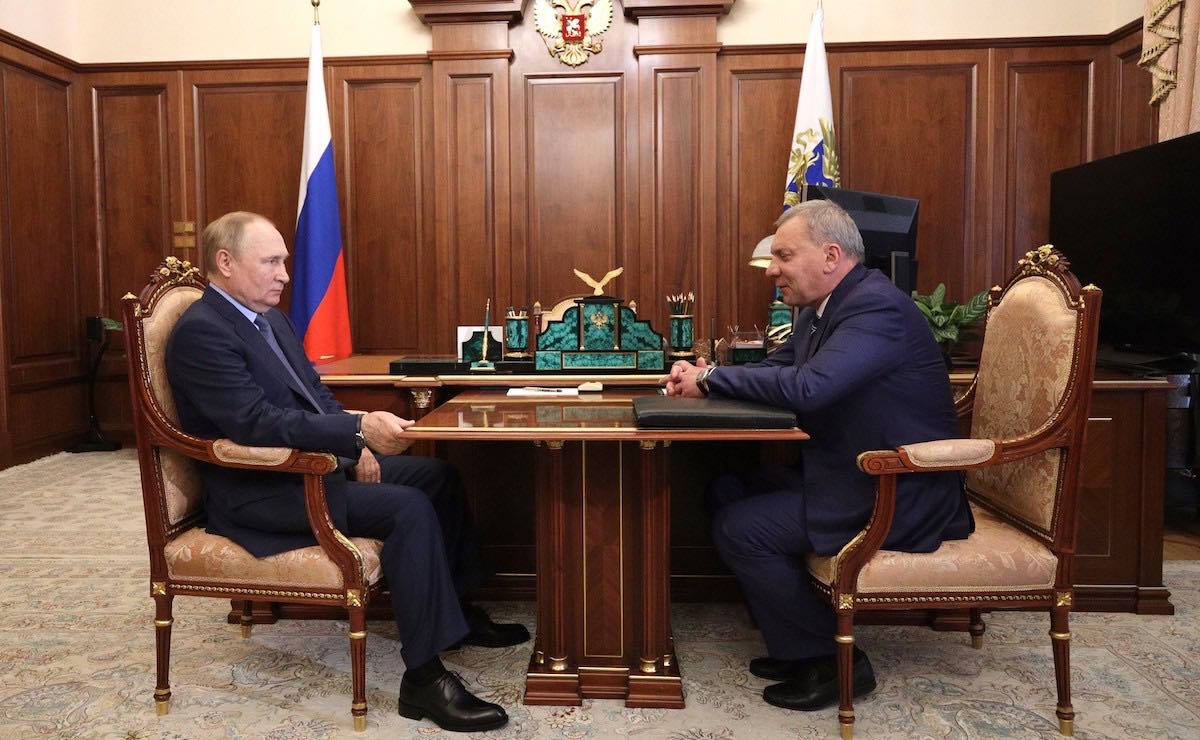 NASA and Russia began building the International Space Station nearly 24 years ago and the outpost has been continuously staffed by rotating astronaut-cosmonaut crews since October 2000. It is one of the most visible signs of East-West cooperation in the wake of the Soviet Union’s demise and the end of the Cold War.

NASA and its other space station parters — the European Space Agency, the Japan Aerospace Exploration Agency (JAXA) and the Canadian Space Agency — want to operate the lab through 2030, using it for basic research and to test technologies and life support protocols needed for future flights to the moon and Mars.

Nelson has repeatedly expressed optimism Russia would agree to continue the program, telling CBS News earlier this year “this professional relationship between our astronauts and cosmonauts, it’s consistent, and it’s going to stay.”

The idea is to ensure at least one Russian and one American is on board the station at all times to operate their respective systems, even if an emergency forced a U.S. or Russian vehicle to leave early, along with all its crew members. That agreement runs through June 30, 2025.

Joel Montalbano, NASA’s ISS program manager at the Johnson Space Center in Houston, said from a technical standpoint, the space station can safely fly to 2030 or even longer.

“The teams are looking at it and we’ll be ready to go to 2030,” he said. “And if somebody asks us to go a little longer, I’m going to put a smile on your face and say we can go do that.”

One of the most complex engineering projects ever attempted, the International Space Station is made up of two primary segments, one managed by NASA and the other by Roscosmos.

The U.S. segment, as it’s known, features four huge NASA-supplied solar wings, two on each end of a truss as long as a football field, complex cooling systems, computer networks, high-speed communications systems and 10 pressurized modules built by NASA, ESA and JAXA, along with a sophisticated robot arm supplied by the Canadian Space Agency.

The back section of the station, made up of six pressurized compartments, is operated by Roscosmos. One of those, known as Zarya, connects the U.S. and Russian segments. It was paid for by NASA but is operated by Russia. Four Russian docking ports are currently used by Progress cargo ships and Soyuz crew ferry vehicles.

Russia provides the propellant and thrusters needed to keep the outpost in orbit while NASA provides most of the station’s electrical power, satellite communications and day-to-day stability provided by four massive gyroscopes.

Periodically boosting the station’s altitude is critical because even orbiting 260 miles up, a thin trace of atmosphere is present. As the station plows through those atoms and molecules at 17,000 mph, or more than 80 football fields per second, that slight “atmospheric drag” acts to slowly but surely reduce the lab’s altitude.

Russia delivers the needed propellant aboard unpiloted Progress cargo ships, which can either fire their own thrusters to provide reboost or transfer propellants to tanks aboard the station for use by on-board thrusters.

NASA’s four control moment gyros, or CMGs, work to re-orient the station as needed without the use of thrusters, saving propellant. While that reduces the amount of fuel needed, it does not provide reboost. Without periodic Russian rocket firings, the lab would slowly descend and eventually re-enter the lower atmosphere and break up.

Along with keeping the station in orbit, the Russians were expected to provide the propulsion and control at the end of the station’s life to drive it out of orbit over an unpopulated stretch of the south Pacific Ocean to prevent any chance of injury or property damage from debris that might survive re-entry.

While NASA recently tested its own reboost capability using a Northrop Grumman Cygnus cargo ship, the agency does not have the capability — yet — to provide all the propellant and thrusting needed if Russia does, in fact, pull out.

One option: NASA possibly could pay Russia for reboost flights like the agency did for post-shuttle seats on Russia’s Soyuz spacecraft.

“The other possibility, and I think it’s not very probable, is it forces a decision to abandon the station earlier by NASA and its partners,” Logsdon said, adding that would free up money that could be diverted to the agency’s Artemis moon program.

While Nelson has expressed optimism Russia would remain on board through 2030, he also has said NASA would come up with a way to keep the station in operation if the Russians ended their support.

“If they abandon the space station? We’d manage, we’d figure it out,” Nelson told CBS News in March. “We know we can continue it for the short term. We’d have to do other things, and those contingency plans are already there. But we don’t anticipate that.”