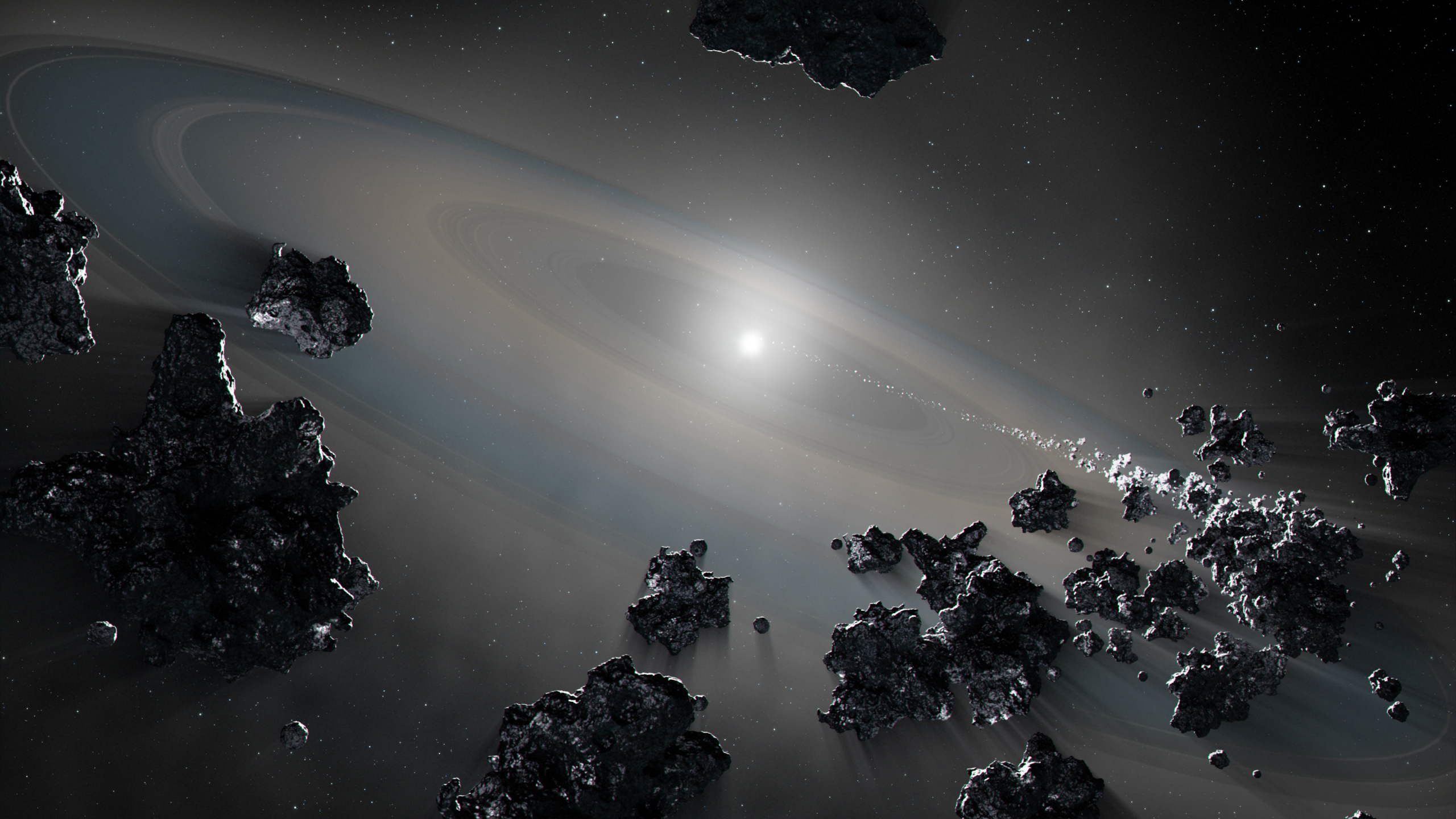 A team of researchers using archival data from the Hubble Space Telescope, a joint venture between NASA and the European Space Agency (ESA), as well as other NASA observatories have observed a white dwarf consuming and destroying a planetary system — the first time an observation of such kind has been made.

The white dwarf, a star leftover from another star that has stopped nuclear fusion and shed its outer layers, is consuming the system by pulling in both rocky-metallic and icy material from the outer and inner reaches of its planetary system.

“We have never seen both of these kinds of objects accreting onto a white dwarf at the same time. By studying these white dwarfs, we hope to gain a better understanding of planetary systems that are still intact,” said lead researcher Ted Johnson, a recent graduate of the University of California, Los Angeles (UCLA).

Johnson et al.’s results are based on the analysis of the material captured by the atmosphere of the white dwarf, named G238-44. Understanding why exactly G238-44 is pulling in material and what that material consists of can help scientists understand how evolved planetary systems behave — which, in turn, can tell them about the makeup of newly forming planetary systems.

For the first time, @NASAHubble astronomers saw a white dwarf star siphoning off debris from the inner and outer reaches of its system—giving us insight into the interior makeup of other planets. https://t.co/xmhqJH8Tdz pic.twitter.com/ZXUSnnt7L5

For G238-44, the rocky-metallic and icy materials it is consuming are generally considered to be the ingredients for creating planets, and many asteroids, comets, and other cosmic debris elements seed these materials to forming planetary bodies during their formation process.

Scientists believe this is how Earth obtained its water, which likely sparked the beginning of the formation of life-sustaining conditions on our planet.

Moreover, the makeup of the material falling onto G238-44 led researchers to hypothesize that icy and potential water-holding reservoirs might be more common among planetary systems than previously thought.

“Life as we know it requires a rocky planet covered with a variety of elements like carbon, nitrogen, and oxygen,” said co-author Benjamin Zuckerman of UCLA. “The abundances of the elements we see on this white dwarf appear to require both a rocky and a volatile-rich parent body – the first example we’ve found among studies of hundreds of white dwarfs.”

But why exactly is all of this material falling into this white dwarf?

When a red giant star, such as the one that preceded G238-44, begins to die and transform into a white dwarf, the planetary system surrounding it can see intense, rapid, and chaotic gravitational changes that can lead to a G238-44-type event occurring, theories tell us.

As a red giant star loses its outer shell and slowly begins to stop nuclear fusion, the orbits of its planets, comets, asteroids, and other celestial bodies begin to dramatically change. This alters a once stable system into a chaotic storm, leading to gravitational interactions and perturbations that fling material and bodes inward toward the now-dead, white dwarf parent star.

As this material gets closer and closer to the star, tidal and gravitational forces tear it apart. But as with the vast majority of things in space, this “chaos” unfolds over millions of years.

“After the red giant phase, the white dwarf star that remains is compact – no larger than Earth. The wayward planets end up getting very close to the star and experience powerful tidal forces that tear them apart, creating a gaseous and dusty disk that eventually falls onto the white dwarf’s surface,” Johnson explained. 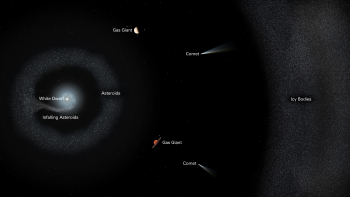 While this violent process has been theorized for many years, the Johnson et al. study is the first to confirm that a white dwarf is capable of simultaneously capturing and consuming material from the inner and outer reaches of its planetary system 100 million years after it began its transition from a red giant star to a white dwarf.

Despite the find, G238-44 is not consuming heaps of planetary material, however. It’s only estimated to consume an amount of mass that is no more than the mass of a small moon or asteroid.

Furthermore, the destruction of planets and planetary material as they fall into a white dwarf gives scientists the unique chance to analyze the contents of their interior.

Using Hubble, Johnson et al. measured the presence of nitrogen, oxygen, magnesium, silicon, iron, and other elements in the material being destroyed around G238-44, with iron and nitrogen being in high abundance. The high amounts of iron suggest that the material (or celestial bodies) being destroyed had metallic cores like our solar system’s terrestrial planets (Mercury, Venus, Earth, and Mars). What’s more, the high amounts of nitrogen around G238-44 suggest that icy bodies were present around the white dwarf.

“The best fit for our data was a nearly two-to-one mix of Mercury-like material and comet-like material, which is made up of ice and dust,” Johnson said. “Iron metal and nitrogen ice each suggest wildly different conditions of planetary formation. There is no known solar system object with so much of both.”

To date, the only celestial body we have detailed and direct knowledge of its interior makeup and functions is Earth, so having these first observations and data of extrasolar planetary material allows scientists to compare the interior makeup of exoplanets to our solar system’s planets.

So, what are scientists looking to learn long-term with this research? In short, they’re looking for answers on how our own Sun will die in a very similar process and what might happen to the portions of the solar system that survive the initial death of the Sun.

Our Sun is expected to meet its death beginning in approximately five billion years when core hydrogen fusion will stop and our parent star will increase in luminosity and size, engulfing Mercury and likely Venus in the process.

The Sun will spend one billion years in this phase before a helium flash event will cause it to shrink to just 10 times its present size and decrease in luminosity to 50% of present before gradually increasing in size and luminosity again over the next 100 million years.

Once helium is exhausted, the Sun will expand again, with four successive thermal pulses ejecting its outer material to form a new planetary nursery while what remains of Earth drafts out to 1.5 AU due to decreasing gravity before spiraling inward under tidal forces.

At this stage, just over 6 billion years from now, what will remain of the Sun will be a white dwarf — with a host of planetary and cometary material to potentially consume just as G238-44 is doing right now 86 light-years away.