Making a 3D map of our galaxy would be easier if some stars behaved long enough to get good distances to them. However, red supergiants are the frisky kids on the block when it comes to pinning down their exact locations. That’s because they appear to dance around, which makes pinpointing their place in space difficult. That wobble is a feature, not a bug of these massive old stars and scientists want to understand why.

So, as with other challenging objects in the galaxy, astronomers have turned to computer models to figure out why. In addition, they are using Gaia mission position measurements to get a handle on why red supergiants appear to dance. 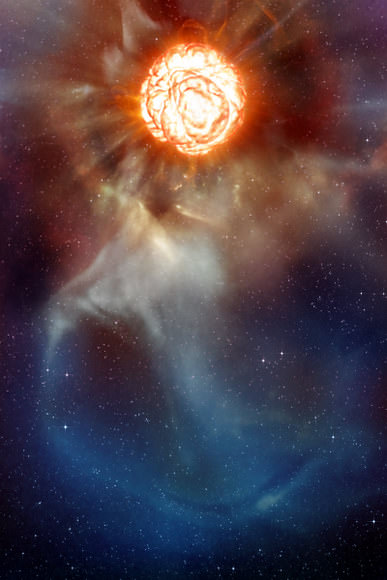 Artist’s impression of the red supergiant star Betelgeuse as it was revealed with ESO’s Very Large Telescope. It shows a boiling surface and material shed by the star as it ages. Credit: ESO/L.Calçada

The population of red supergiants has several common characteristics. These are stars at least eight times the mass of the Sun, and they’re enormous. A typical one is at least 700 to 1,000 times the solar diameter. At 3500 K, they’re much cooler than our ~6000 K star, although measuring those temperatures is tricky. They are super bright in infrared light, but dimmer in visible light than other stars. They also vary in their brightness which (for some of them) may be related to that dancing motion. More on that in a moment.

If the Sun was a red supergiant, Earth wouldn’t be around. That’s because the star’s atmosphere would have reached out to Mars and swallowed our planet up. The best-known examples of these stellar behemoths are Betelgeuse and Antares. Red supergiants exist throughout the galaxy. There’s a population of them you can see at night in a nearby cluster called Chi Persei. It’s part of the well-known “Double Cluster”.

The Structure of Red Supergiants

So, we have this population of stars that don’t behave as expected and don’t lend themselves to easy measurements. Why is that? They’ve expanded so much that they end up with a very low surface gravity. Because of that, their convective cells (the structures that carry heat from inside to the surface) get pretty large. One cell covers as much as 20-30 percent of the radius of the star. That actually “interrupts” the brightness of the star.

The convection not only moves heat from the inside out, but also helps the star eject material into nearby space. And, we’re not talking small poofs of gas and plasma, either. A red supergiant can send a billion times more mass to space than the Sun does. All that action makes the star appear frothy and like its surface is boiling madly. In essence, it makes the star’s position appear to dance in the sky.

Red Supergiants in the Grand Scheme of Things

Red supergiant material becomes part of the chemical “inventory” of galaxies. The elements these stars create go on to become new stars and worlds. So, it helps to get a good understanding of how these stars lose their mass throughout their lives. It’s all part of understanding stellar evolution in the Milky Way and its impact on the cosmic environment. That’s why astronomers want to trace the total mass that these aging stars blow out to space. They also measure the stellar wind velocity and calculate the geometry of the cloud of “star stuff” that envelopes a red supergiant.

Now, what does this have to do with the dancing action? Well, the boiling of the convection cells and the buildup of a shell of material around the star adds to its variability. That is, it affects its brightness over time.

One way that astronomers use to determine a star’s exact position is by using its “photo-center”. That’s the center of light of the star. If the star varies in brightness (for whatever reason), that photo-center shifts. It won’t match the barycenter. (That’s the common center of gravity between the star and the rest of its system. It is a component in distance measurements.) In essence, the photo-center varies as the star’s brightness changes. Combined with the action of the huge convection cells, the star appears to dance in space.

A video of the simulation of a red supergiant surface shows that the constantly changing photosphere of the star (big image) leads to changes in the apparent position of the star’s center (small image at lower left). Credit: A. Chiavassa, Tl Grassi, et al.

The Dance Changes the Distance Estimate

The red supergiant “position problem” attracted Andrea Chiavassa (Laboratoire Lagrange, the Exzellenzcluster ORIGINS, and the Max Planck Institute for Astrophysics). She and astronomer Rolf Kudritzki (Munich University of Observatory and the Institute of Hawai’i) and a science team created simulations of the boiling surfaces and variability of red supergiant brightness.

“The synthetic maps show extremely irregular surfaces, where the largest structures evolve on timescales of months or even years, while smaller structures evolve over the course of several weeks,” said Chiavassa. “This means that the position of the star is expected to change as a function of time.”

The team compared their model to stars in Chi Persei. That cluster was measured by the Gaia satellite, so the positions of most of its stars are very precise. Well, all but the red supergiants. “We found that the position uncertainties of red supergiants are much larger than for other stars. This confirms that their surface structures change dramatically with time as predicted by our calculations”, explained Kudritzki.

This change in observable position provides a solution to understanding the shifting positions of red supergiants. That, in turn, presents difficulties in measuring exact distances to many of these stars. The current model also gives clues to the evolution of these objects. But, knowing what’s causing the stars to dance offers a path to a solution when calculating their distances. Future models will help astronomers refine those distances, and provide more insight into what’s happening to these stars as they age.

Dancing Pattern of Red Supergiants on the Sky

The post Red Supergiant Stars Bubble and Froth so Much That Their Position in the Sky Seems to Dance Around appeared first on newsastronomy.com.