A galactic nova flared briefly into naked eye visibility for a day, before vanishing from sight.

Some stars burn bright but brief. These transitory novae pepper the sky, with one flaring into naked eye visibility every few years… but it was a recent brief appearance of just such a ‘new star’ that gave astronomers a chance to probe the secrets of the Universe.

Japanese amateur astronomer Seidji Ueda was the first to raise the alarm worldwide. Amateurs are always on the hunt for galactic novae, as it’s one of the key fields where they can contribute to real science. The American Association of Variable Star Observers (AAVSO) has been the key clearinghouse for novae observations and light curves since 1911.

The discovery was made on the night of June 21st, 2021. The ‘star’ was a galactic nova in the northern constellation of Hercules the Hero, right along its border with Sagitta and Aquila, just off the galactic plane. Soon, the nova had a name: V1674 Herculis (V1674 Her or Nova Herculis 2021). 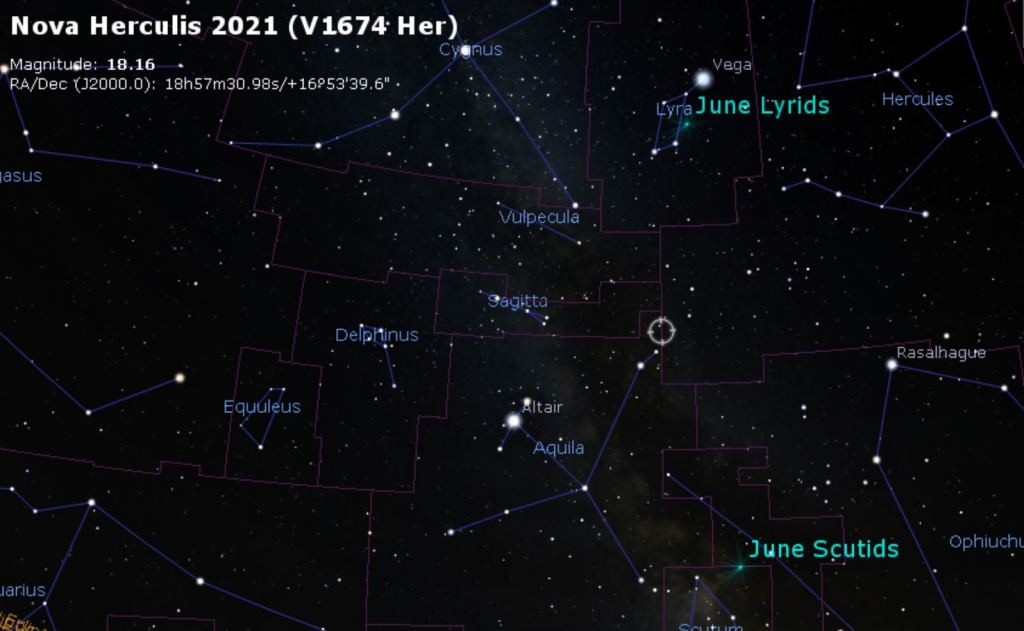 The location of Nova Herculis 2021 in the sky. Credit: Stellarium.

Generally, novae reach a peak brightness for several days or weeks before fading from view. Recent memorable novae include Nova Delphini 2013 and Nova Centauri 2013. Such ‘new stars’ can give familiar constellations a decidedly strange look. 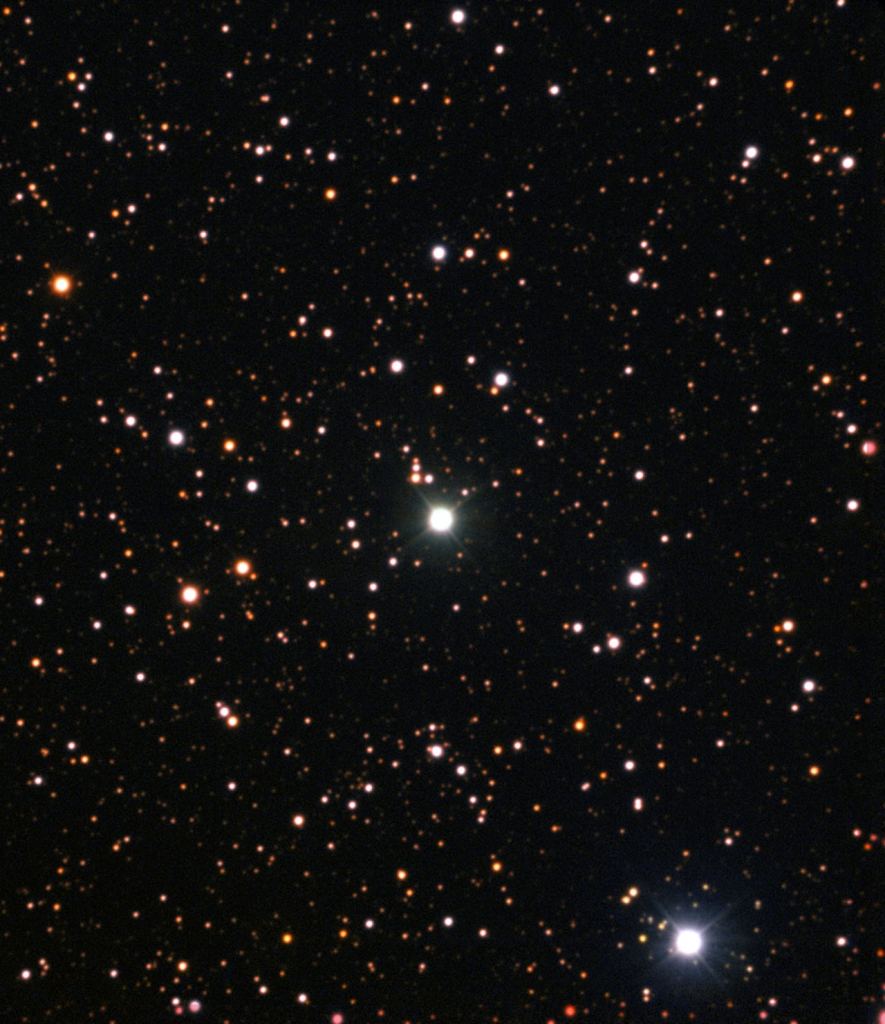 This image from the New Technology Telescope at ESO’s La Silla Observatory shows Nova Centauri 2013 in July 2015 as the brightest star in the centre of the picture. This was more than eighteen months after the initial explosive outburst. This nova was the first in which evidence of lithium has been found. Credit: ESO

But Nova Herculis 2021 had a surprise in store. The nova topped out, flirting with naked eye brightness at magnitude +6 before fading from view in just one day. 24 hours after its eruption, the nova had faded a hundredfold. This tops the 3-day record set by Nova V838 Herculis (also in Hercules) in 1991. 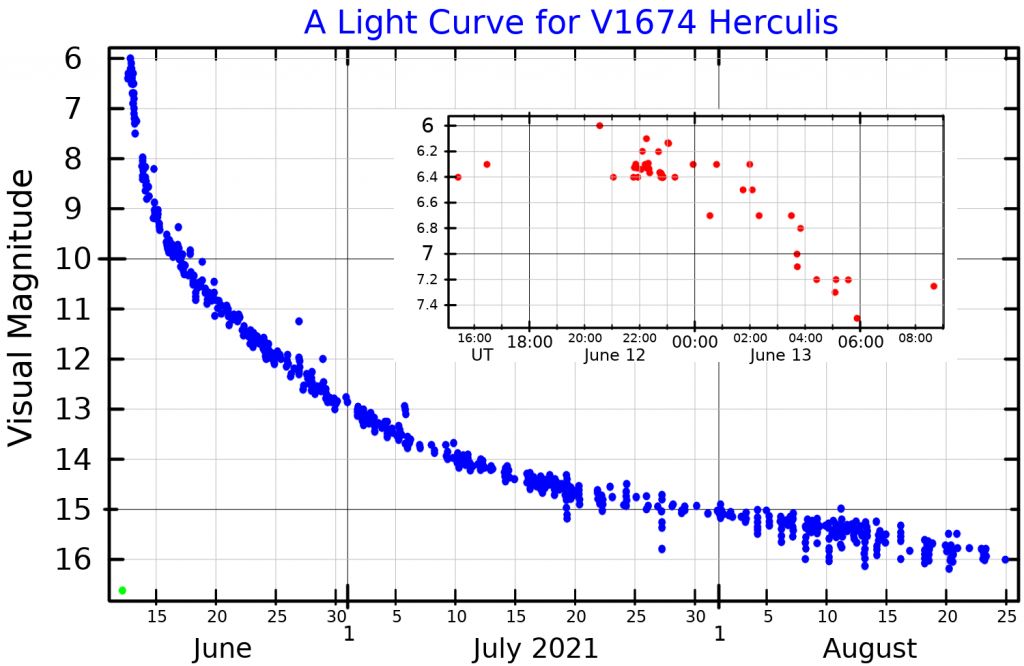 Novae are produced when a dense white dwarf star siphons material off a main sequence companion. The material becomes compressed on the surface of the white dwarf, which can then ignite under the pressure of nuclear fusion in a violent flash. Novae can erupt multiple times, in what’s known as a recurrent nova. Novae can also build up and evolve over time into supernovae, which can be seen across the Universe.

“The white dwarf that exploded is massive and growing in mass toward a Supernova 1A explosion,” astronomer Sumner Starrfield (University of Minnesota) told newsastronomy.com. “It ejected far less mass than necessary to be accrete by the white dwarf and initiate an explosion.”

Nova are vital as they seed heavier elements back into the cosmos, and Type IA supernovae are used as standard candles to measure extra-galactic distances.

Stranger still, Nova Herculis 2021 exhibits a 501 second ‘wobble’. This oscillation is visible across the visible and x-ray spectrum, and is persistent from bright to faint magnitudes. This, along with variations in the energetic wind ejected by the nova into the surrounding interstellar medium seems to be driven by the orbital period of the white dwarf star versus its companion. 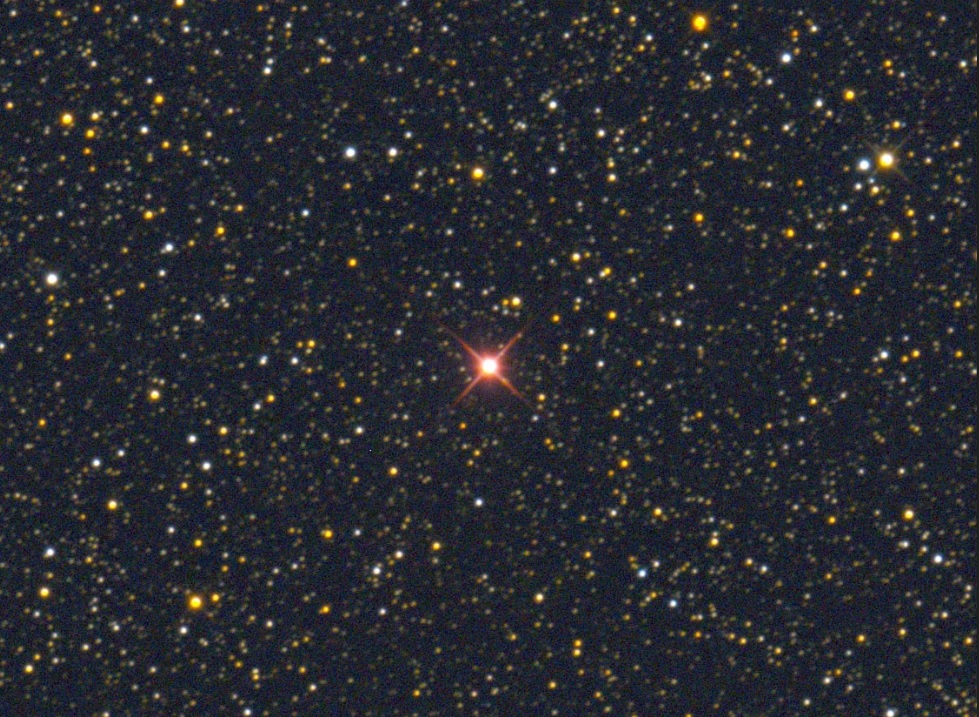 “We are continuing to observe this system since it has not returned to quiescence,” says Starrfield. “We know that it has a ~500 second oscillation—presumably the white dwarf rotation period—and an about 3.6 hour rotation period that is probably the rotation period of the binary. We need more spectroscopy and photometry to better understand those periods and the implications of those periods.”

Observations of Nova Herculis 2021 were made using the Large Binocular Telescope on Mount Graham in Arizona, along with its multi-object double and PEPSI spectrograph.

Studying novae may also go a ways towards addressing the ‘cosmological lithium problem,’ and the source of lithium abundance in metal-rich stars like our Sun.

“Both theory and observations now imply that classical novae are the lithium producers in the galaxy,” says Starrfield. “A long standing problem has been why there is more lithium in stars like the Sun than produced by the Big Bang.”

Nova Herculis is a fascinating discovery to follow, in the strange stellar menagerie of our Universe.

Read the report on Nova Herculis out of University of Minnesota and Ohio State University in the Research Notes of the American Astronomical Society.