Earlier this year, the teams attached to the Voyager 1 mission noticed that the venerable spacecraft was sending weird readouts about its attitude articulation and control system (called AACS, for short). The data it’s providing didn’t really reflect what was actually happening onboard. That was the bad news. The good news was that it didn’t affect science data-gathering and transmission. And, the best news came this week: team engineers have fixed the issue with the AACS and the data are flowing normally again.

The AACS is an important part of Voyager 1. It’s the machinery that keeps the spacecraft’s antenna pointed at Earth. Without it, all that valuable science data would get lost in space. The issue was really with the AACS’s data—it was garbled, and that left the team in the dark (so to speak) about the exact nature of the spacecraft’s health and activities.

Sussing out the Voyager 1 Problem

It turns out that it was a “networking problem” similar in spirit to something IT professionals might face here on Earth. Essentially, the AACS was sending telemetry data all right, but it was routing it to the wrong computer. Worse, it was a computer that had failed years ago. That actually corrupted the data, which led to the strangely garbled messages the ground-based crew received. It took a while for the team to figure out the problem, and it wasn’t clear why AACS suddenly began routing data to the wrong computer. Chances are, it received a faulty command from another computer. That implies there’s a problem somewhere else that they’ll have to solve. But, so far, the issues are not a threat to the spacecraft.

According to Suzanne Dodd, Voyager’s current project manager, once the engineers figured out that the old, dead computer might have been part of the problem, they had a way forward. They simply told the AACS to switch over sending to the correct computer system. “We’re happy to have the telemetry back,” said Dodd. “We’ll do a full memory readout of the AACS and look at everything it’s been doing. That will help us try to diagnose the problem that caused the telemetry issue in the first place. So we’re cautiously optimistic, but we still have more investigating to do.”

The ongoing issue with AACS didn’t set off any fault protection systems onboard the spacecraft. If it had, Voyager 1 would have gone into “safe mode” while engineers tried to figure out what happened. During the period of garbled signals, AACS continued working, which indicated that the problem was either upstream or downstream of the unit. The fact that data were garbled provided a good clue to related computer issues.

This aging and still-valuable spacecraft has been exploring the outer parts of the solar system since its launch in 1977, along with its twin sibling, Voyager 2. They each traveled slightly different trajectories. Both went past Jupiter and Saturn, but Voyager 2 continued on to Uranus and Neptune. They’re both now outside the solar system, sending back data about the regions of space they’re exploring. 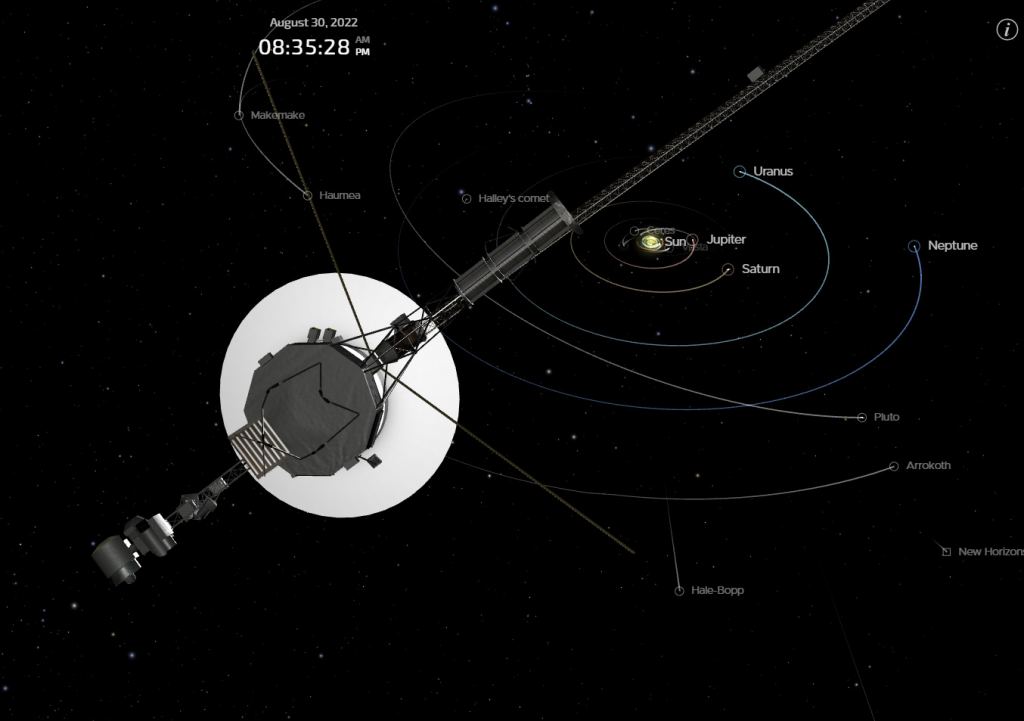 Where is Voyager 1? As of August 30, 2022, it is well outside of and above the plane of the Solar System. It will cross the Oort Cloud and head out to the stars. Courtesy NASA/JPL.

Voyager 1 flew past Jupiter in March 1979, and Saturn in November 1980. After its close approaches to those two gas giants, it started a trajectory out of the solar system and entered interstellar space in 2013. That’s when it ceased to detect the solar wind and scientists began to see an increase in particles consistent with those in interstellar space.

These days, Voyager 1 is more than 157.3 astronomical units from Earth and moving out at well over 61,000 km/hour. It’s busy collecting data about the interstellar medium and radiation from distant objects. If all goes well and it doesn’t whack into anything that could destroy it, the spacecraft should continue sending back data for nearly a decade. After that, it should fall silent as it travels beyond the Oort Cloud and out to the stars.