The Universe’s giant galaxies pose a thorny problem for astronomers. The galaxies have grown large somehow, and the only things that can make a galaxy giant are probably other galaxies. So mergers must have played an important role.

Astronomers have known about galaxy mergers for a long time, but the process is still mysterious. A new study based on ten years of work presents observations and direct measurements of the galaxy merger process that remove some of the mystery.

It seems axiomatic that galaxies grow large by merging with other galaxies. Where else could they acquire so much mass? Galaxies are the largest, most massive, distinct structures in the Universe. Galaxy clusters and groups are larger, but they’re collective structures made of distinct, individual galaxies that are associated but not interacting. For a giant galaxy like our Milky Way—or our even larger neighbour, the Andromeda Galaxy—to grow so massive, it had to acquire large amounts of mass. And the only available sources of large-scale mass are other galaxies.

Galaxy formation is an active area of study in cosmology, and the theoretical work on galaxy mergers is substantial. But observations and detailed conclusions have lagged behind. 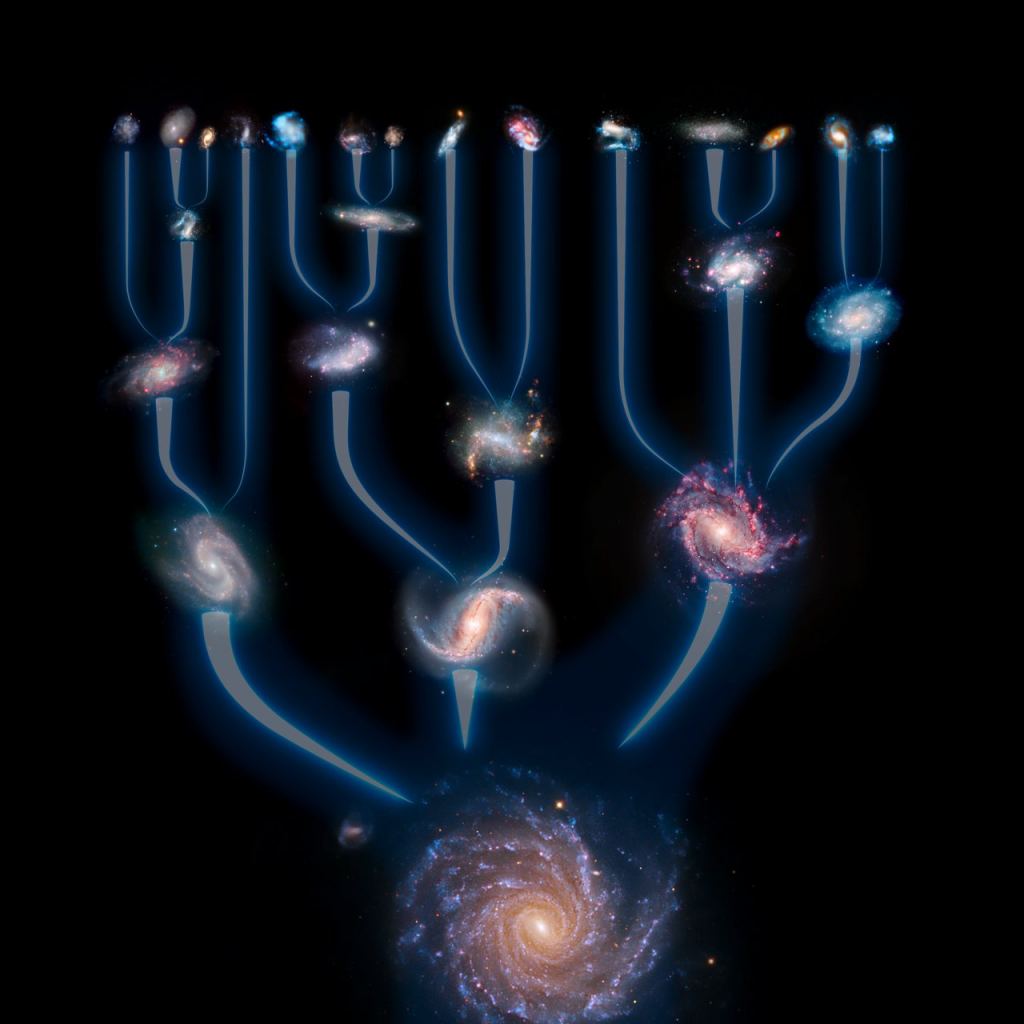 According to the hierarchical model of galaxy formation, small galactic building blocks formed first, only to coalesce into ever more giant galaxies over the lifetime of the Universe. Image Credit: ESO/L. Calçada

The Hubble and other telescopes have captured many images that look like galaxies in the process of merging. But there’s more than meets the eye here, at least there was in the Hubble Space Telescope’s earlier days. The venerable space telescope lacked the technology to observe the most distant and ancient galaxies with clarity. 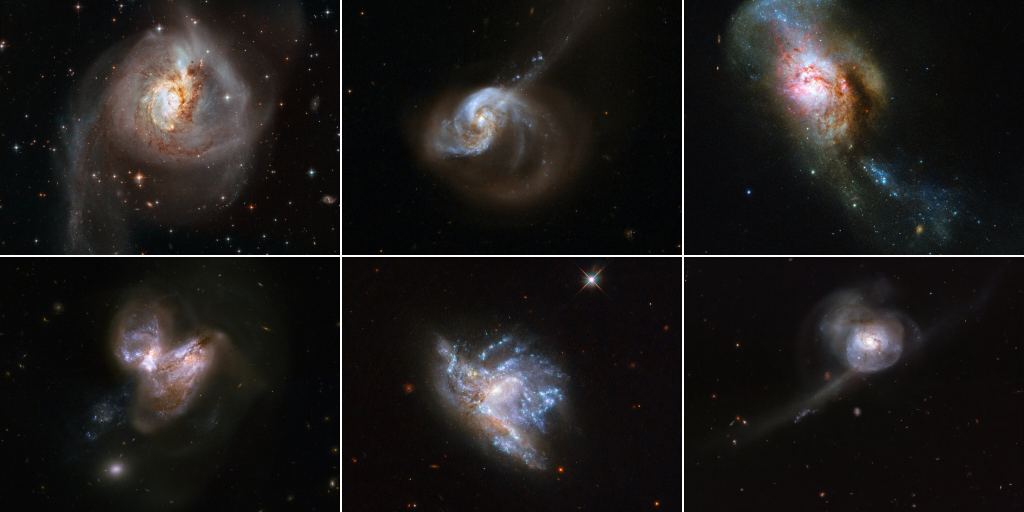 When the Hubble Space Telescope began its mission, it struggled to observe red-shifted galaxies. Hubble still saw many peculiar and irregular red-shifted galaxies, but astronomers couldn’t be sure if what they saw was real or was the result of Hubble’s observational limitations at the time.

Irregular morphology is a hallmark of post-merger galaxies, but the problem is galaxies can have oddball shapes for another reason: intensely active star formation. Intense star formation can create knots and lumps in the galactic structure similar to post-merger morphologies. So astronomers working within the limitations of the Hubble in the early 1990s couldn’t be sure what they were seeing. Were they seeing just the active star-forming regions (SFRs) of these galaxies, and the rest of the stars were below detection thresholds? Or were they indeed looking at post-merger galaxies?

With such pronounced uncertainty, it was difficult for astronomers to make any firm conclusions about galaxy mergers, their effect, and their prevalence.

But a new paper based on Hubble observations—and modern machine intelligence, supercomputers, and neural networks—is reaching some new conclusions about galaxy mergers. The new paper is “A Simulation-driven Deep Learning Approach for Separating Mergers and Star-forming Galaxies: The Formation Histories of Clumpy Galaxies in All of the CANDELS Fields.” It’s published in The Astrophysical Journal. Christopher Conselice, a Professor of Extragalactic Astronomy at the University of Manchester, led the study.

The study is partly based on IllustrisTNG100, one of a series of three massive simulations in the Illustris TNG project. The project simulates galaxy formation and the processes that drive it. The TNG project runs on some of the world’s fastest supercomputers and includes TNG50, TNG100, and TNG300, in that order. Each successive simulation builds upon the previous one and increases the resolution. The authors decided that the IllustrisTNG100 was the right mix of size and resolution for this study. 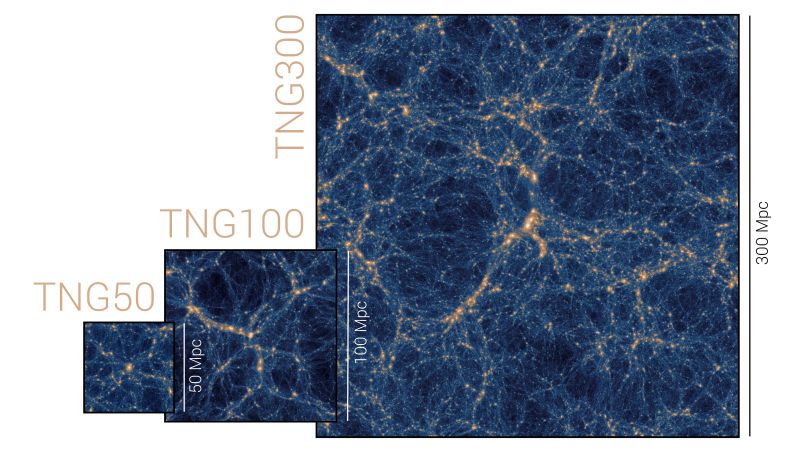 The group of researchers needed to distinguish between galaxies experiencing intense star formation and galaxies that have recently undergone major merging events. This is important because large active star-formation regions appear clumpy and irregular, much like post-merger galaxies. And though mergers can trigger spikes in star formation, mergers aren’t the only thing that can cause them. Before they could reach any conclusions about galaxy mergers, the researchers had to be sure they were differentiating between post-merger galaxies and what astronomers call ‘noninteracting intensely star-forming galaxies.’

This is a Hubble telescope image of NGC 2623, a late-stage merger between two spiral galaxies. Mergers compress the gas in both galaxies triggering a spike in active star formation. But some distant galaxies experience intense star formation not triggered by mergers, and it’s difficult to differentiate between them. Image Credit: By ESA/Hubble, CC BY 4.0, https://commons.wikimedia.org/w/index.php?curid=63401428

In 1998, the Hubble got an infrared instrument called NICMOS (Near Infrared Camera and Multi-Object Spectrometer.) NICMOS allowed astronomers to study high redshift galaxies. The instrument showed that the peculiar-shaped galaxies astronomers had seen in Hubble images were peculiar, and astronomers hadn’t seen just active star-forming regions. This implied that the “… bulk stellar mass in these galaxies was indeed out of equilibrium,” as the authors write.

Thanks partly to NICMOS, astronomers concluded that distant galaxies they observed are morphologically peculiar. But it still wasn’t clear why these high-redshift galaxies were so odd. Astronomers rightly suspected that it was related to how they formed, but the details of how these distant galaxies grew to be so peculiar remained elusive.

For this study, the team took 160,000 simulated images of galaxy mergers from TNG100 that are similar to those taken with the Hubble. They developed a powerful machine learning tool that successfully separated post-mergers from star-forming galaxies in IllustrisTNG 80% of the time. In effect, they built their machine learning tool and then trained it. Their 80% success rate represented a significant improvement from previous efforts. It’s been challenging to distinguish post-merger galaxies from intensely star-forming galaxies, but the researchers wanted to overcome that obstacle. “Our task in this paper is to correctly distinguish mergers from star-forming galaxies by only using their morphology and structure,” they write. 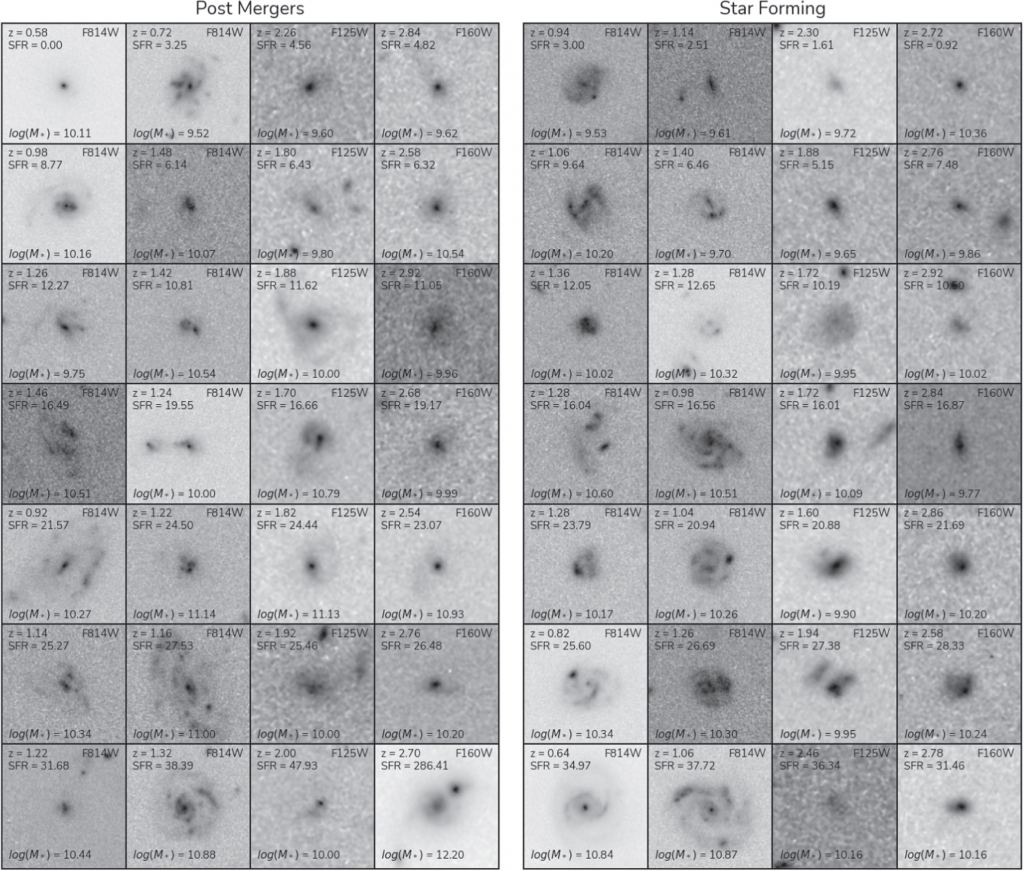 We’re accustomed to gorgeous Hubble images of galaxies, but that’s not what makes up scientific data. This figure from the study shows some of the galaxy images in the data. On the left are some of the post-merger galaxies identified in the study, and on the right are star-forming galaxies. Each one is shown with its redshift and stellar mass. Image Credit: Conselice et al. 2022.

Other researchers have worked on the same problem, and this study builds on previous research. Many of these same authors have collaborated on earlier papers tackling the same problem. So this work is a continuation of the effort to understand galaxy mergers and a refinement of their previous methods.

In the paper’s conclusion, the researchers write, “Our machine-learning-driven approach provides a new way to investigate the formation history of galaxies with models that are informed by cosmological simulations.” While they’ve made progress and overcome some limitations, they also point out some limitations that still stand in the way. “Nevertheless, currently we are still limited to high-mass major-merger cases due to resolution limitations from the simulations and mass completeness from the observations.” It’s possible that with observations skewed toward high-mass mergers, the conclusions might be similarly skewed.

As with many astronomy, astrophysics, and cosmology topics, the James Webb Space Telescope is poised to contribute. The authors say that observations with the James Webb and the Euclid space telescope “… will open a new window to incorporate the effect of minor mergers and lower-mass systems. Together, this will represent a major step toward uncovering unresolved questions about galaxy evolution.”

The new study shows that galaxy mergers are one of the most dominant processes in galaxy evolution. Over the past 10 billion years, according to the study, the average massive galaxy has undergone three separate mergers, and those mergers more than doubled the mass of the original galaxy.

So, what significance does this have for our fledgling civilization on Earth? The Milky Way is our home, and it’s a giant galaxy. Whatever the study says about giant galaxies, it also says about our circumstances.

The Milky Way is headed for a merger. In a few billion years, our galaxy will collide and merge with the Andromeda Galaxy. In fact, the two galactic halos may already be interacting. The result will be a gargantuan galaxy containing well over a trillion stars.

But the Milky Way has mergers in its past, too, and they may have played a role in humanity’s existence.

“This also suggests that our own Milky Way galaxy has likely undergone at least one of these significant mergers during its history, which radically changed its shape and formation history,” said Professor Conselice. “Mergers, such as the ones in this study, trigger star formation, which may be the origin event for how stars including our own Sun formed, as well as feed the matter that grows central black holes.”

The post Plenty of Examples That Giant Galaxies Like the Milky Way Formed Through Mergers appeared first on newsastronomy.com.