News Astronomy > News > Perseverance has Found a ‘Cat Hair’ in its Drill Chuck. What is it?

After each use of one of the tools at the end of the Perseverance rover’s arm, the mission’s engineering team always takes images of the tool to make sure everything is still in working order.

Last week the rover’s drill was used to take a core sample from a rock – the 12th such sample that has now been stored and sealed for possible future retrieval in a proposed sample return mission. The team then took images of the drill and sample collection system components. In those images, two small pieces of debris were visible: a small object on the coring bit (which is stored in the bit carousel) and a small hair-like object on the drill chuck.

“The team is now looking into the origin of the debris, and whether it originated from the rover or external debris from the entry, descent, and landing (EDL) system that was jettisoned at the start of the mission,” wrote Art Thompson, Project Manager at NASA’s Jet Propulsion Laboratory, in a NASA blog post.

The ‘hair’ can be seen at the 10 o’clock position in the image above. It could be similar to the ‘fishing-line’-like tangle of fibers found by the rover a few weeks ago, which was very likely debris left over from Perseverance’s landing — possibly from the parachute or backshell. 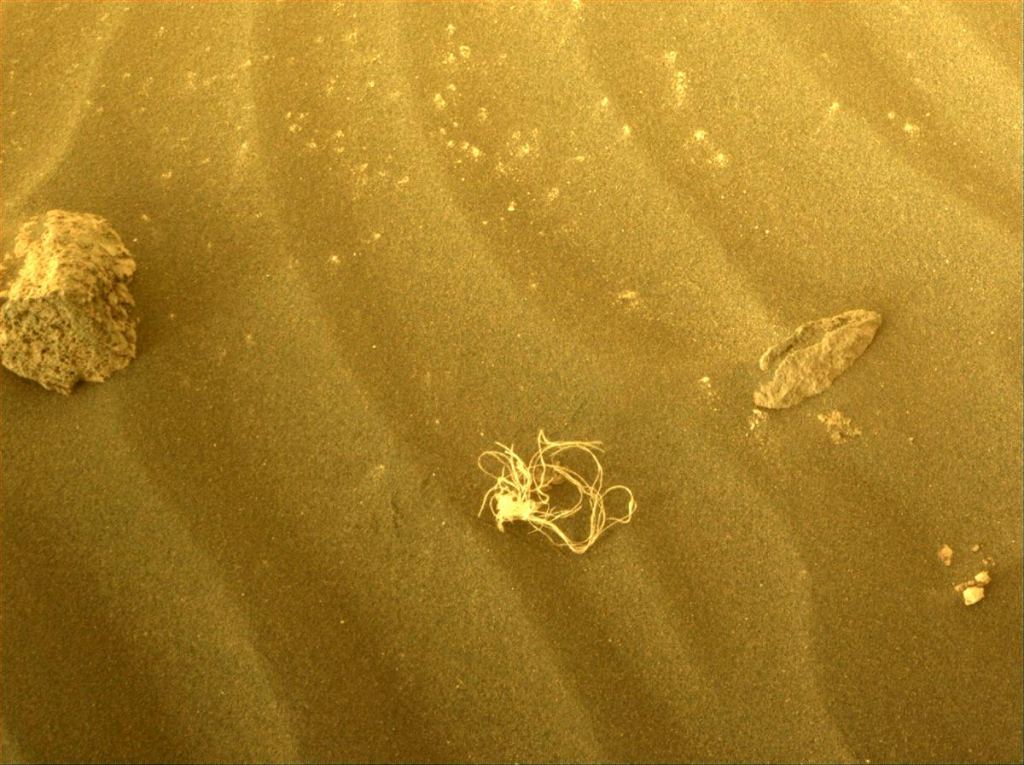 NASA’s Mars Perseverance rover acquired this image of a string-like object in the the ground in front of it using its onboard Front Right Hazard Avoidance Camera A. This image was acquired on July 12, 2022 (Sol 495) at the local mean solar time of 16:56:25. Image Credit: NASA/JPL-Caltech

The tiny rock fragments around the bit carousel are likely leftover bits from when the drill was used to obtain the 12th core sample. 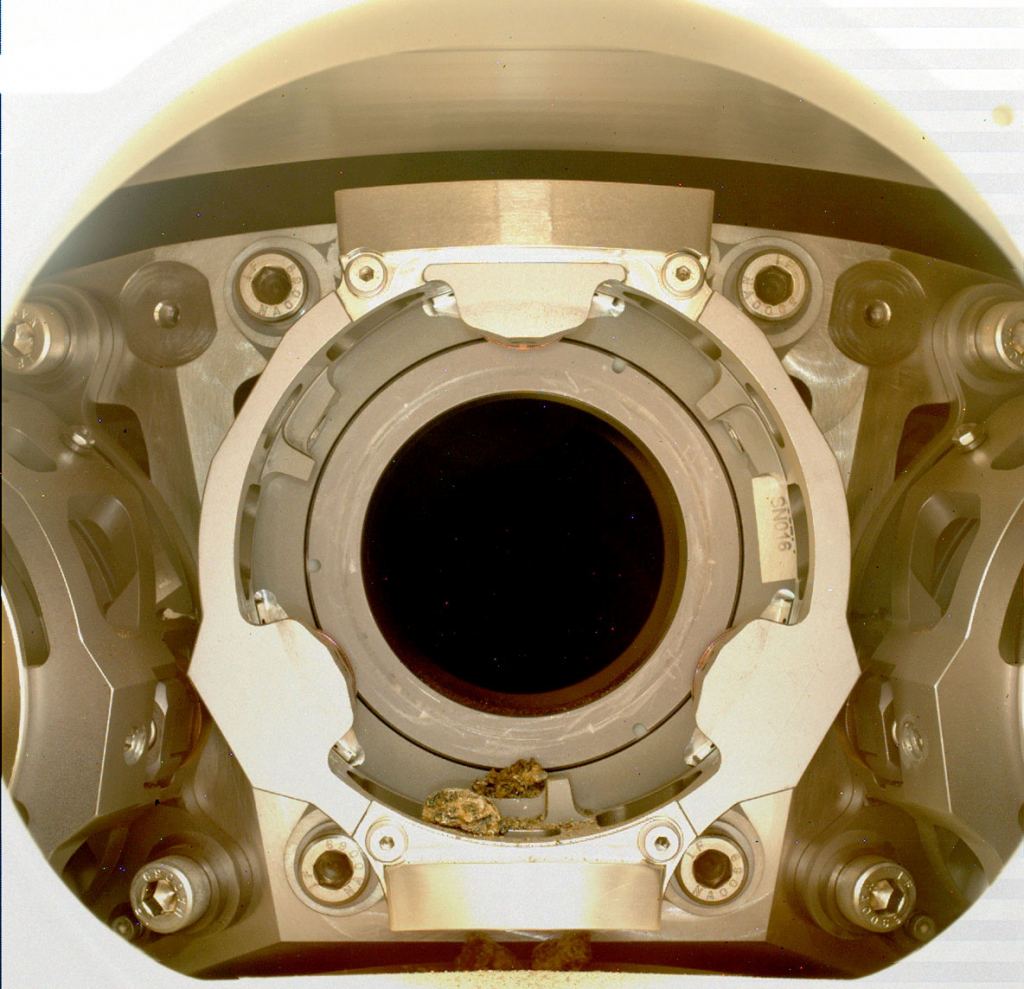 Pebble fragments can be seen on the carousel of the NASA Perseverance rover in the picture from January 7, 2022. Credit: NASA/JPL-Caltech/MSSS

The rover team will investigate by taking more pictures of the drill bit carousel and chuck, as well as the area on the ground where the core sample was taken to see if there is any additional fibers or rock fragments that could help tell the story of these objects. Thompson said other diagnostic activities could be carried out this week, as well.

Earlier this year, the team had to perform a special maneuver with the drill to eject bits of rock from the drill; the process is visible in this animation, showing the rocks bits falling out. The team will determine if a similar maneuver can get rid of the current rock fragments.

A portion of a cored-rock sample is ejected from the rotary percussive drill on NASA’s Perseverance Mars rover. The imagery was collected by the rover’s Mastcam-Z instrument on Jan. 15, 2022, the 322nd Martian day, or sol, of the mission. Credit: NASA/JPL/MSSS.

The drill is a rotary percussive drill designed to extract rock core samples from the surface of Mars. The drill has two modes: rotary (drill bit under constant pressure) and percussive (drilling supplemented by hammerlike blow. It is located on the end of the rover’s robotic arm on the “turret,” which is like a hand that carries scientific cameras, mineral and chemical analyzers, and the drill.

Call them the “dusty dozen.” I’ve now got 12 rock core samples on board, collected while #SamplingMars at these different sites around Jezero Crater. Learn more about all my samples, and keep track of the ones still to come: https://t.co/SuSfqejyOZ pic.twitter.com/5VoaJjj3Xh

You can watch for new images of the drill on the rover’s raw images webpage, (images are sent to Earth almost daily), to see if the team was able to get rid of the debris.

In the meantime, science team member Erin Gibbons said on Twitter that they are taking this opportunity to look more intently at the rocks and soil surrounding the rover.

One perk of @NASAPersevere being stationary while the engineering team collects data about the 'foreign object debris' on the drill, is we have time to really explore the rocks at our wheels.

We're surrounded by very cool fractured bedrock and blocks that tumbled down the delta pic.twitter.com/AxopVU40SV

The post Perseverance has Found a ‘Cat Hair’ in its Drill Chuck. What is it? appeared first on newsastronomy.com.