There’s a population of stars in the heart of our galaxy whipping around Sagittarius A* (the Milky Way’s central supermassive black hole). Astronomers just found the closest, fastest one (so far). It’s called S4716 and it orbits Sag A* once every four years. That makes it officially the fastest star moving at the heart of our galaxy. To give you some perspective, the Sun moves around the center of the galaxy at a much more leisurely pace once every 230 million years.

S4716 and its high-speed cluster neighbors have been dubbed “squeezars”. The name was first suggested by scientists Tal Alexander and Mark Morris in 2003 to describe a class of star that follows a highly eccentric orbit (more elongated than circular) around a supermassive black hole. This cluster of stars fits that bill pretty well. They have really close orbits around Sag A*. The letter S in their names denotes that proximity. 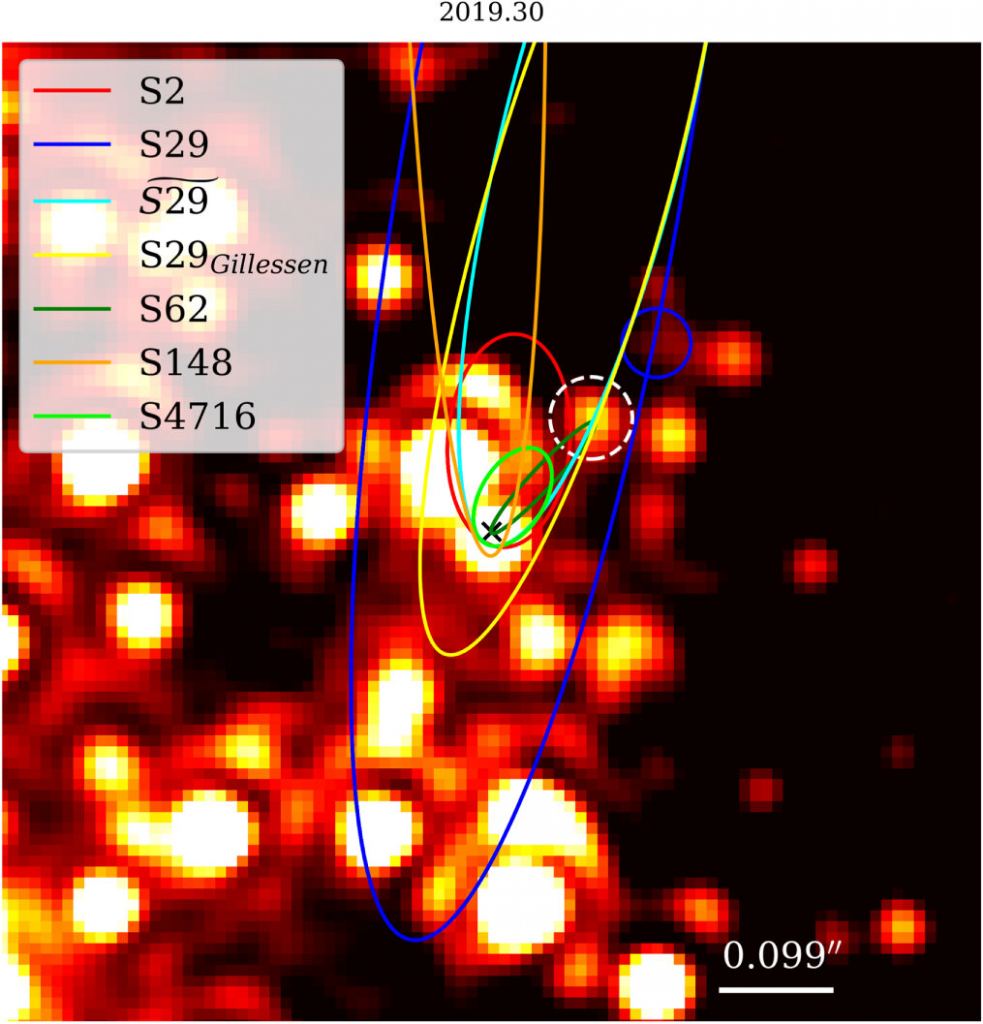 Over the past decade, astronomers have identified this cluster, starting with a star called S2 they thought was the closest to the black hole. It was measured traveling at approximately 3% of the speed of light. Then, they found another one even closer to the black hole, and eventually identified others called S4714, S4711, S4713 and S4715—all moving quite fast. So, S4716 is just the latest discovery in the cluster of Sag A*-circling stars.

Why So Fast, Little Stars?

Why are the stars in the cluster zipping around like bees near a hive? It’s all really just orbital mechanics. An orbiting object’s speed is affected by the mass of the object being orbited and the radius of the orbiting body. In this case, we use the mass of the black hole and the radius of the star’s orbit. Sag A* has a mass of about 4.1 million solar masses. That generates a tremendous gravitational pull, which affects the orbit of anything nearby. The closer a star gets to the black hole, the faster it orbits. And, that’s why S4716 is moving so fast. It has an orbital radius (at its closest approach) of 100 astronomical units. That’s only a hundred times the distance between Earth and the Sun—pretty darned small in astronomical terms.

Researchers at the University of Cologne and Masaryk University in Brno (Czech Republic) observed the star and analyzed their data to figure out its orbital radius and speed. That’s how they clocked it moving at a very small fraction of the speed of light.

Tracking the Latest Squeezar and What Its Existence Means

To get their observations, the astronomers used five telescopes on Mauna Kea (Hawai’i) and in Chili, equipped with special instruments that let them measure the star’s motion. They combined four of these telescopes into one giant eye on the sky to get more details. Then they applied specific algorithms to analyze the data and understand the orbit of the star. Finding one so close was still a surprise to the team. “For a star to be in a stable orbit so close and fast in the vicinity of a supermassive black hole was completely unexpected and marks the limit that can be observed with traditional telescopes,” said Florian Peissker, leader of the research team.

One question that astronomers keep asking is how these stars got so close to the black hole. It’s not likely they formed there since the action of the black hole disrupts star-forming factories. That prevents stars from being born in the near vicinity of Sag A*. But, there’s another explanation. “The short-period, compact orbit of S4716 is quite puzzling,” said team member Michael Zajacek, an astrophysicist at Masaryk University. “Stars cannot form so easily near the black hole. S4716 had to move inwards, for example by approaching other stars and objects in the S cluster, which caused its orbit to shrink significantly.”

8,000 kilometers per second: star with the shortest orbital period around black hole discovered
Observation of S4716—a Star with a 4 yr Orbit around Sgr A*
The fastest star ever observed

The post One Star Flies Past the Milky Way’s Black Hole at 3% the Speed of Light appeared first on newsastronomy.com.