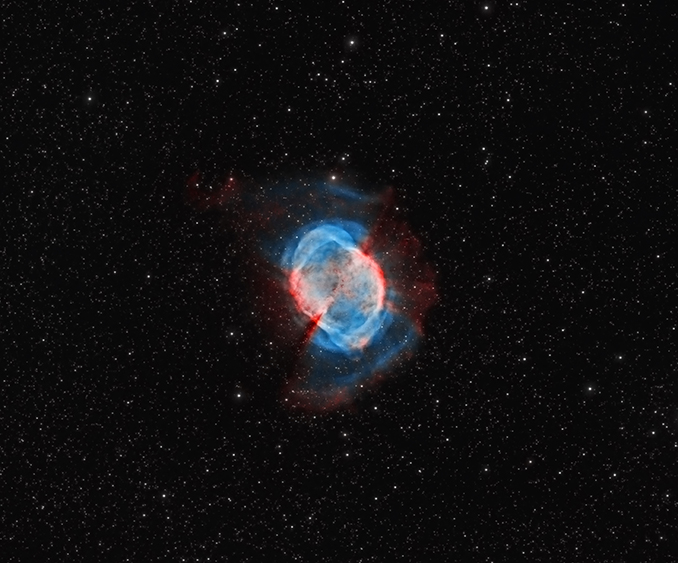 The Dumbbell Nebula (Messier 27) is one of the finest deep-sky objects in the entire sky. Image: Steve Milne.

The glorious Dumbbell Nebula, in Vulpecula, is unquestionably one of the top planetary nebulae in the entire sky. It was the first planetary nebula discovered, in 1764 by Charles Messier, and John Hershel coined its nickname after his father William had recognised its two-lobe shape. Also well known as Messier 27, it’s bright enough to be detected through a modest pair of binoculars, and even a small telescope will begin to reveal the hour-glass or dumbbell structure that gives it such a distinctive appearance.

Add to this is the fact that many observers rate the Dumbbell as one of the easiest of all planetary nebulae to observe, as it shows up well in a light-polluted or moonlit sky on June’s short, permanently twilit nights, and the Dumbbell an is unmissable and irresistible midsummer target.

Messier 27 lies in the faint and indistinct constellation of Vulpecula, the Fox, a rectangular-shaped piece of celestial real estate sandwiched between Cygnus lying to the north and Sagitta and Delphinus, on its southern boundary.

This general area of sky is rather bereft of bright ‘signpost’ stars, but thankfully the Dumbbell is so bright it shouldn’t be too difficult to locate it. The best route to it is probably from Sagitta’s distinct ‘arrow’ asterism; a triangle of fourth-magnitude stars, alpha (α), beta (β) and delta (δ) mark the arrow’s tail, with gamma (γ) at the arrow’s tip. From gamma, nudge your telescope just three degrees north to land on M27.

On late July nights, the Dumbbell Nebula can be observed as soon as darkness descends. At mid-month from London, it lies 55 degrees above the east-southeastern horizon at 11pm BST. There’s roughly a four-hour observing slot in which to enjoy M27’s majesty as it climbs to an altitude of 60 degrees above the southern horizon when it culminates at around 1am.

A small refractor of 60–80mm (~2.5- to three-inches) aperture will snare the Dumbbell, but its two bright lobes will be very tough to pick out, even using an O-III or UHC narrowband filter. Images reveal that the brightest part of M27’s structure spans 8’ × 6’, quite a substantial apparent diameter for a planetary nebula, so you’ll need only moderate magnification to secure a good overall view.

The lobes become apparent when observing through a 150mm (six-inch) telescope, but to catch of glimpse of the Dumbbell’s thirteenth-magnitude central star would probably require at least a 250mm (ten-inch) ‘scope operating on a transparent and steady night. 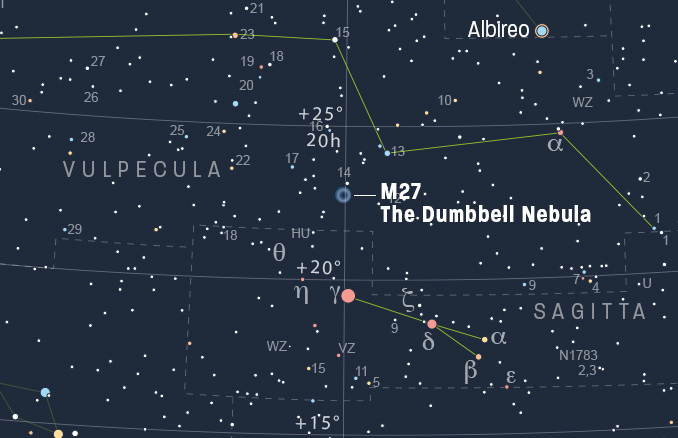 M27 should an easy capture among the stars of Vulpecula.