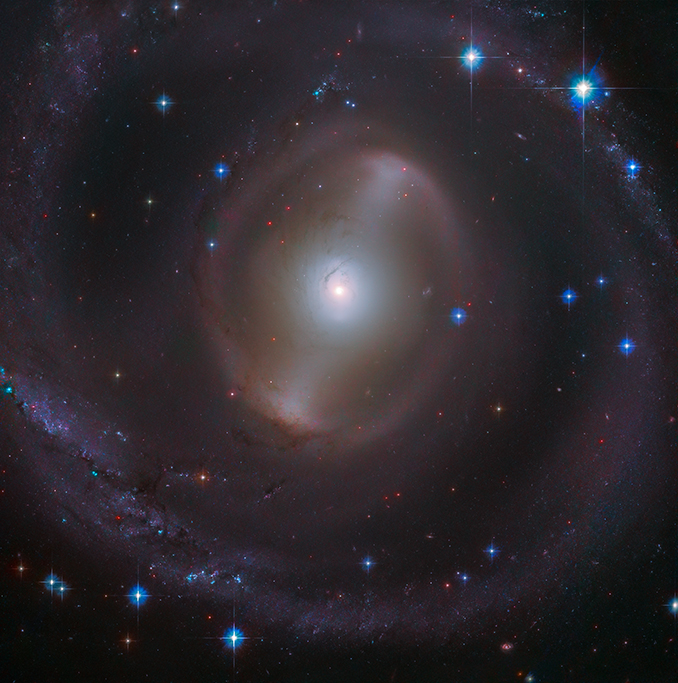 NGC 2217, in the constellation of Canis Major and located about 65 million light years away, is a galaxy in transition. It appears as a ring galaxy, with a central bar inside an oval-shaped ring, enclosed further out by two tightly wound spiral arms. There appears to be clear space between the inner oval and the outer ring, though in reality that space will contain faint stars and gas. Galactic structures such as these often form following a head on collision with another, smaller galaxy.

The outer ring is still forming stars, but the inner oval is red and dusty. Star formation there appears to have ceased, and the light is increasingly dominated by interstellar dust reflecting starlight. Galaxies with this smeared-out, dusty appearance are known as lenticular galaxies, which NGC 2217 seems to be turning into. Look closely, however, and you’ll notice two things about the galaxy’s core. One is that the galaxy has not one, but two bars, with the second, inner, bar hidden at the centre of the outer bar. These are so-called ‘nested bars’, with one nestled inside the other. The longer outer bar formed first and funnelled gas from the outer regions of the galaxy into the centre, where that gas formed stars and, in this case, those stars and the funnelled gas became the basis of an inner bar. And the second thing to notice about NGC 2217’s core is that the inner bar has a blue tint, indicative of hot, young stars that are still being born there.

Nested-bar galaxies could be hugely important in the overall evolution of galaxies and the intergalactic medium. Double bars are thought to be more efficient at funnelling gas into the centre of a galaxy than just a single bar. This gas, besides forming stars, also feeds the supermassive black hole that lurks at the centre of a galaxy. When one of these black holes is overfed, it can spew some of its meal back out into space, in the form of radiation called feedback. This feedback can forever alter a galaxy, blowing all its star-forming material away into the intergalactic medium.

Galaxies with double bars have only really been known about since the late 1990s, when the likes of the Hubble Space Telescope, which took this image, were finally able to resolve the smaller inner bars. Today, about 50 nearby spiral galaxies are known to have nested bars, and it’s estimated that up to 30 per cent of all barred spirals have double bars. Image: ESA/Hubble and NASA/J. Dalcanton.