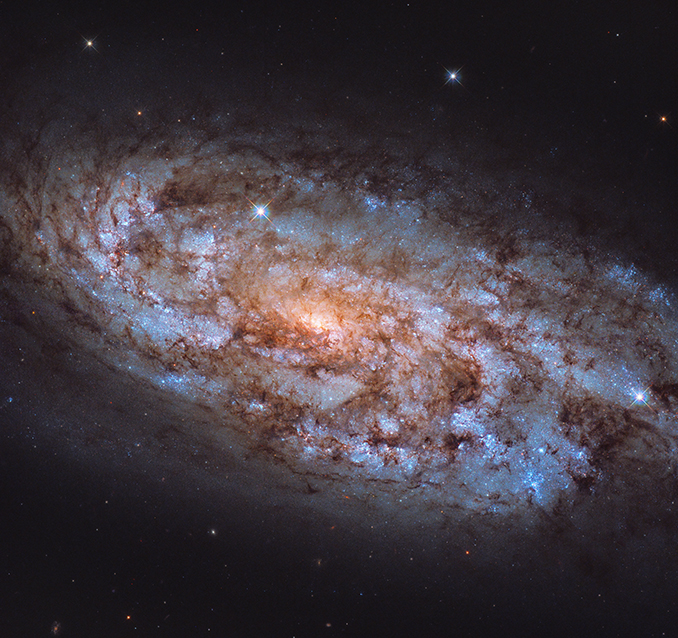 This dense, swirling spiral galaxy is NGC 1792, located 34.6 million light years away in the constellation of Columba, the Dove. This crystal-clear image from the Hubble Space Telescope shows a red core of older stars and spiral arms of sparkling young blue stars, interwoven with dark lanes of dust. Many of those blue stars have formed recently, cosmologically speaking. In fact, NGC 1792 is undergoing a starburst, wherein it forms stars at a rate ten times faster than in our Milky Way Galaxy (where between one and ten new stars form each year on average).

The question is, what is causing this starburst activity? Ordinarily, an encounter with another galaxy can stir star-forming gas up, but NGC 1792 shows no obvious signs of a merger or even a close encounter. However, the nearby galaxy NGC 1808 has a distinct warp to its spiral disc typical of such encounters. In 2001, astronomers using the Australia Telescope Compact Array, which is a network of six 22-metre radio telescopes in New South Wales, dug deeper into the mystery to find out what was happening. They reported no streams or tidal tails of gas between NGC 1792 and NGC 1808 that one would expect to have been pulled out of their respective galaxies had there been a close encounter. However, they found more subtle signs that something had happened.

All spiral galaxies like NGC 1792 have a disc of hydrogen gas underpinning their structure, and this disc can extend beyond the visible stars. In the case of NGC 1792, however, this disc has been truncated, which is evidence that there has been some gravitational stripping by a passing galaxy. The conclusion, therefore, is that NGC 1972 and NGC 1808 did have an encounter, but at a respectful distance.