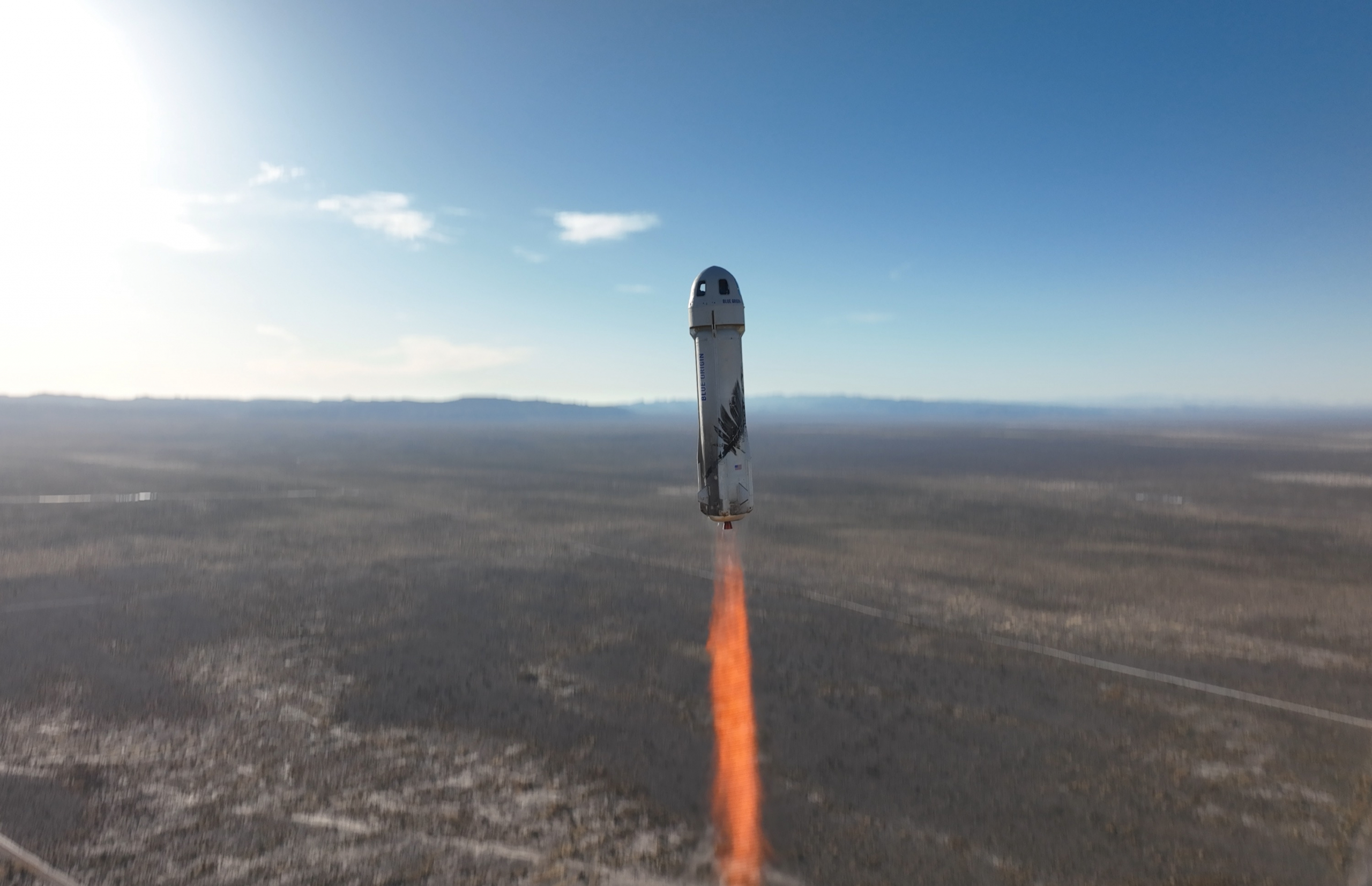 The suborbital mission lifted off on August 4 at 8:57 AM CDT (13:57 UTC) from Blue Origin’s Launch Site One located near the town of Van Horn, Texas. The crew consisted of Coby Cotton, Mário Ferreira, Vanessa O’Brien, Clint Kelly, Sara Sabry, and Steve Young.

Sara Sabry becomes the first Egyptian astronaut, and Mário Ferreira becomes the first Portuguese astronaut on NS-22. Colby Cotton, the co-founder of the Dude Perfect YouTube channel, was selected for this mission by an online vote.

The area around Launch Site One is also known as Corn Ranch, located near Blue Origin’s test site for their BE-4 engine, which will power both United Launch Alliance’s Vulcan Centaur rocket and Blue Origin’s New Glenn rocket.

In addition to this mission being the twenty-second flight for both Blue Origin and the launch vehicle, it is also the third mission for Blue Origin this year.

For the NS-22 mission, Blue Origin used the RSS First Step capsule along with the NS4 first stage booster. The booster of the launch vehicle is also called the Propulsion Module.

Both RSS (Reusable Space Ship) First Step and the booster (NS4) first flew into space during the NS-14 mission in early 2021. RSS First Step is the same spacecraft that flew on Blue Origin’s first crewed flight, NS-16, which launched on July 20, 2021.

The launch marks a 61-day turnaround for the launch vehicle between NS-21 and NS-22.

Launch
Prior to launch, the crew were driven to Launch Site One in Rivian trucks. After arrival, they climbed the launch tower and were helped into the RSS First Step spacecraft.

At T-0, the single BE-3 engine on the main booster of New Shepard ignited.

The BE-3 runs on Liquid Oxygen (LOX) and Liquid Hydrogen (LH2). The engine operates in the combustion tap-off cycle. Another version of the engine, known as the BE-3U, will fly on the second stage of Blue Origin’s future New Glenn rocket. 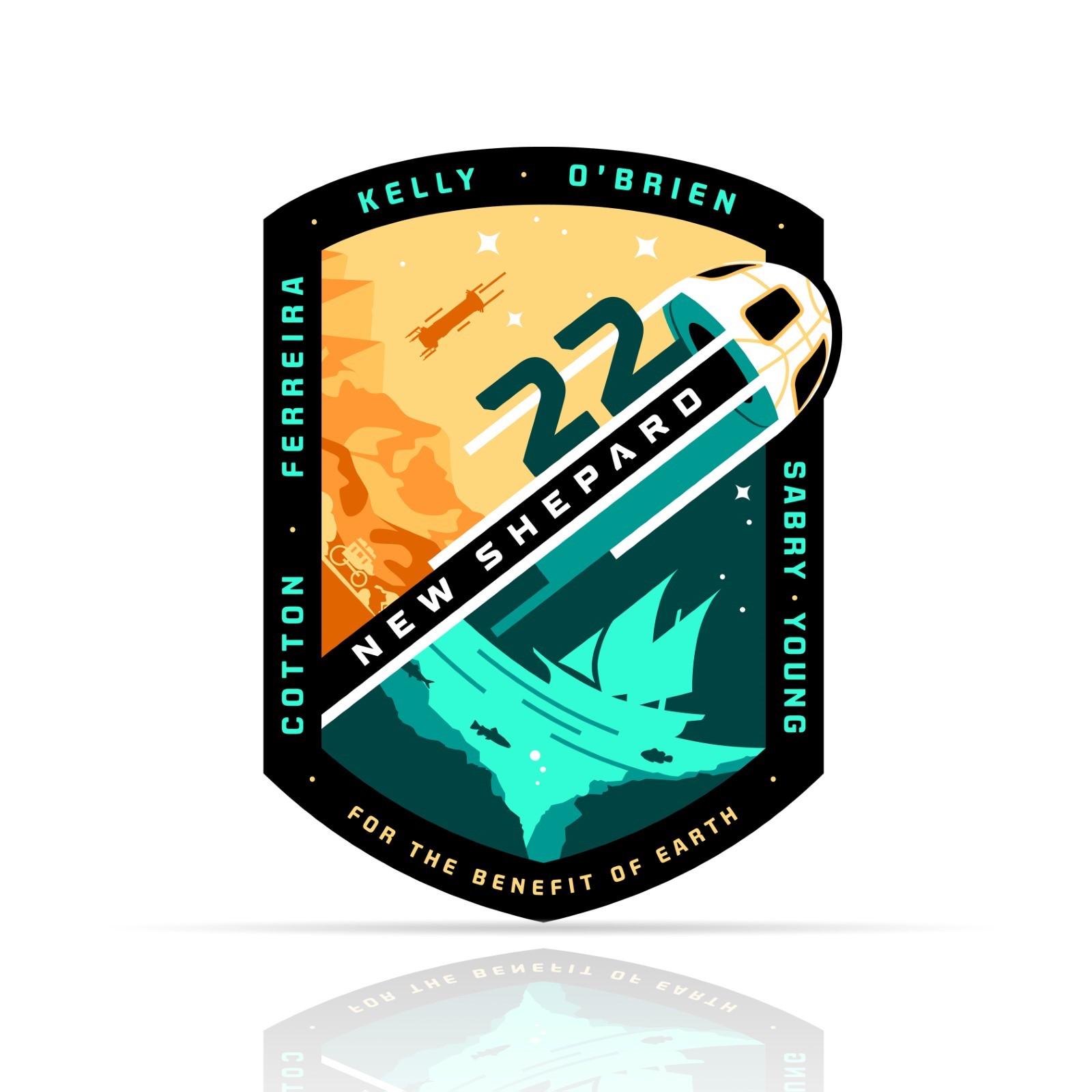 The BE-3 subsequently spooled up, and the launch vehicle lifted off from Launch Site One at around T+7 seconds.

Around 57 seconds after launch, New Shepard went through the region of Maximum Dynamic Pressure, also known as Max-Q. During this time, the BE-3 engine throttled down. At this point, the launch vehicle was at an altitude of around 21,400 feet.

The capsule is fitted with an abort system powered by a single solid rocket motor known as the Crew Capsule Escape Solid Rocket Motor (CCE SRM) built by Aerojet Rocketdyne.

At around two minutes and 20 seconds after launch, the single BE-3 engine shut down–a milestone known as Main Engine Cut Off (MECO). New Shepard was situated at around an altitude of 182,700 feet, and it continued to ascend.

The capsule and the New Shepard Propulsion Module then separated around 20 seconds later. At around the same time, the space tourists on board began to experience the zero-gravity (Zero-G) environment. At this point, the crew was around 262,400 feet in altitude.

The capsule then crossed the Kármán line, which is situated at 330,000 feet, 100 kilometers, or 62 miles in altitude. The line was named after the Hungarian-American engineer, Theodore von Kármán, and is generally used to divide aeronautics and astronautics.

Once the spacecraft passed above 100 km, the crew met most of the definitions of becoming astronauts.

RSS First Step, along with the crew inside, then reached their apogee–the maximum altitude during flight–around four minutes into the flight. The apogee should be around 351,100 feet in altitude. The capsule and the Propulsion Module then began their descent back to earth.

Around four minutes and 50 seconds into flight, the crew of six space tourists were given a one-minute warning to get back in their respective seats for the rest of the descent. Around a minute later, the crew was strapped back into their seats prior to the end of the Zero-G portion of the flight.

Around T+6 minutes and 40 seconds into the flight, the Drag Brakes on the top of the Propulsion Module also deployed as the vehicle passed through around 14,500 feet in altitude. 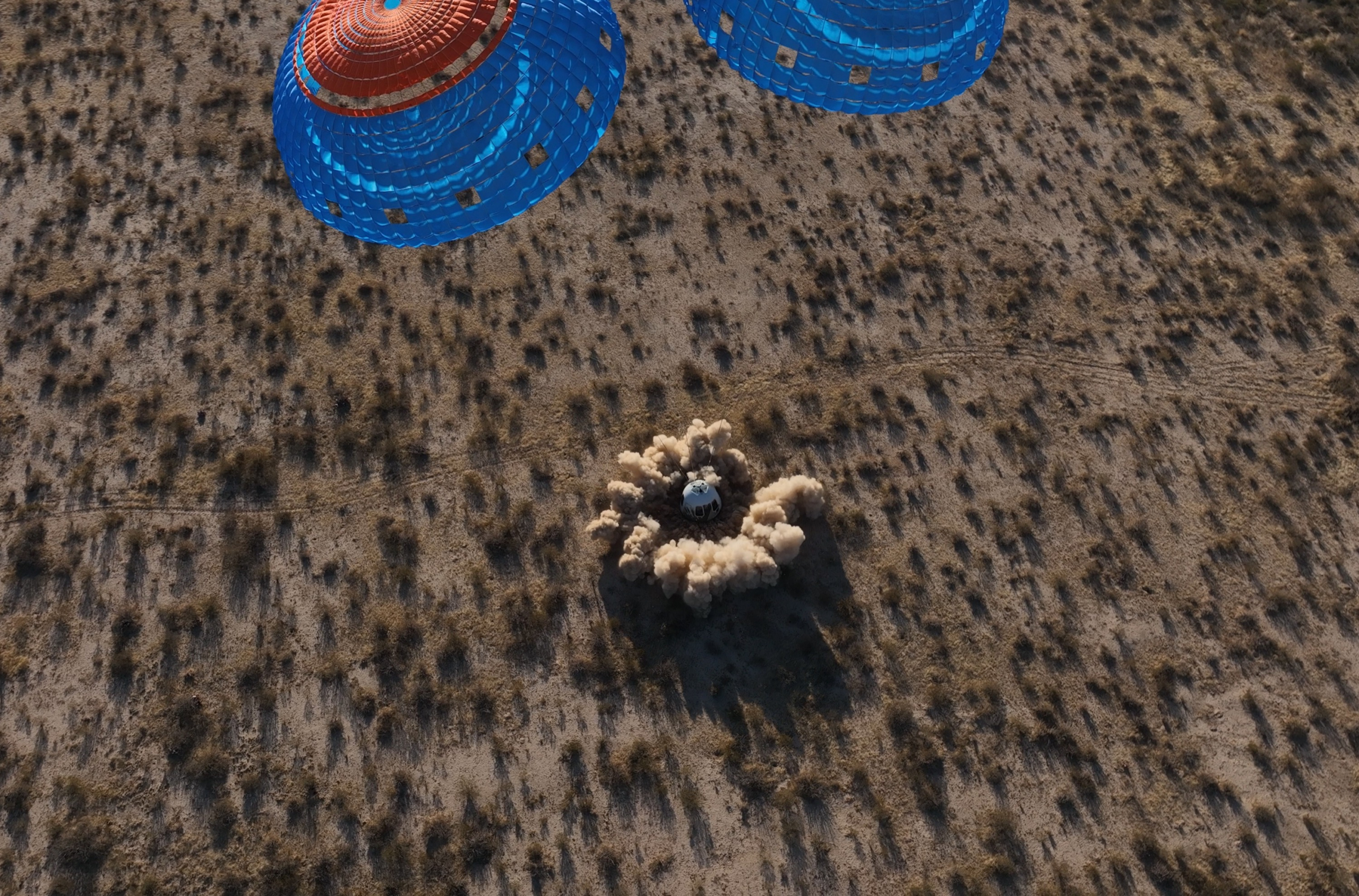 Soon after, sonic booms were heard around the landing site in South Texas, marking the arrival of the booster.

The single BE-3 engine ignited once again to slow the vehicle down, and the landing legs subsequently deployed. The vehicle propulsively landed at the North Landing Pad at around T+7 minutes and 20 seconds.

Around a minute later, the drogue chute on the capsule will deployed, which slowed the vehicle. This was followed by the deployment of the three main parachutes. At this point, the vehicle was  around 3,000 feet in altitude.

The capsule then fired retro rockets (similar to the Russian Soyuz) and subsequently touched down in West Texas around 10 minutes after launch. Soon after, the crew is extracted from RSS First Step.