Two fundamental factors affect all astrophotography – timing and location. If a camera happens to be at the right place at the right time, it can capture images that have never been seen before. And with the proliferation of cameras throughout the solar system, more and more novel photos will be captured at an ever-increasing frequency. China’s Tianwen-1 probe added to that novel collection to celebrate its second anniversary by taking a shot of Mars’ moon Phobos.

The image itself is stunning, with clear definition of many features of the object, whose length isn’t much more than that of Manhattan. Seen in full sunlight, or as we might call it on Earth, as a “full moon,” there are some noticeable streaks in the upper left of the photo, which may indicate relatively recent impacts. In addition, a crater named Estonian astronomer Ernst Öpik is visible in the upper right of the image. Other features, named after other astronomers and characters from Gulliver’s Travels, aren’t as clear on the image, as the space around the Öpik crater is largely featureless.

China’s interest in Phobos isn’t new either. It originally planned to launch its first Mars orbital mission, known as Yinghuo-1, on a rocket also holding Russia’s Fobos-Grunt sample return mission to Mars’ innermost satellite. Unfortunately, that spacecraft failed to reach its necessary trajectory and crashed back to Earth in 2012.

That sort of setback doesn’t keep a good space agency down, though. Tianwen-1 is China’s current flagship mission to the red planet, with the orbital probe that snapped the picture of Phobos comprising only one of six separate spacecraft that entered the Mars system in one of the largest payloads ever sent to there. They have been busily collecting novel scientific data using a suite of instruments on rovers, landers, and satellites.

Most likely, there are no new scientific data in this picture of Phobos that hasn’t already been captured elsewhere. In its current circular orbit 6,000 km above Mars’ surface, there isn’t much change to be had. However, inspiration is one of astrophotography’s goals too, and this unique take on a startling unique moon certainly provides that. 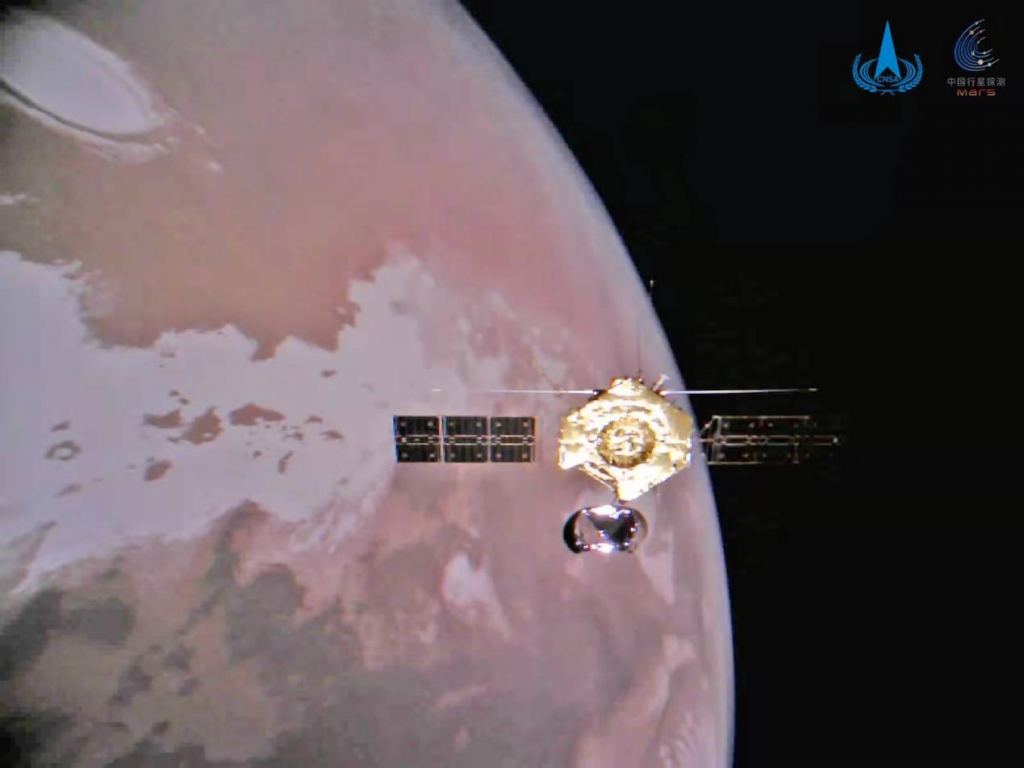 “Selfie” from Tianwen-1 above the surface of Mars.
Credit – CNSA

These aren’t the only fantastic pictures Tianwen-1 has taken either. A few months ago, it released a complete image of the surface of Mars. Using cameras on some other components, it has even managed to take a few selfies both on and high above the red planet. Its lander and rover have also been captured by the HiRISE camera on NASA’s Mars Orbiter.

With all the cameras floating around the planet, future astrophotography buffs can expect a continual flow of novel images. Let’s hope they will inspire even more to come.