NASA has announced tentative placeholder launch dates for its beast of a rocket, the Space Launch System (SLS), on its maiden flight to deep space. While work still needs to be accomplished to ensure its launch, the tentative dates are currently August 29th, September 2nd, and September 5th. While NASA stressed these are not set dates, the announcement nonetheless puts SLS closer than ever to flight.

The maiden launch of the most powerful rocket ever built comes after years of budget increases and delays. Funding for SLS was approximately $1.5 billion in 2011 but has increased almost every year until it hit $2.5 billion in 2021. This came after Congress mandated SLS “operational capability…not later than December 31, 2016”, but has faced countless delays since then due to audits and poor management. 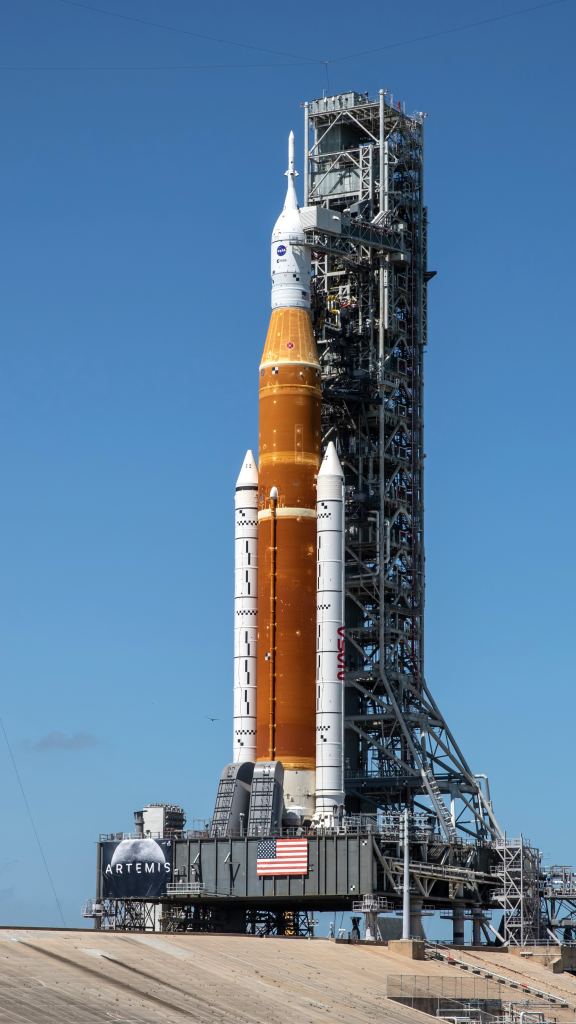 Nonetheless, SLS has proven its resilience time and time again, and as of this moment it proudly stands atop its launchpad at Kennedy Space Center as the final checkouts are conducted for its maiden flight into space. As SLS awaits its destiny, the first thought that comes to the mind of SLS Associate Program Manager, Dr. Sharon Cobb, as she sees SLS on the launchpad is teamwork.

“The rocket on the pad represents a journey taken not by one person but by a team of brilliant people working together,” says Dr. Cobb. “When SLS rolls to the launchpad it represents the work of people and companies from across this country, and this work comes together as the most powerful rocket ever built. It represents human ingenuity and dedication and is something we can all be proud of.”

The purpose of SLS will be to return astronauts that are part of NASA’s Artemis program to the surface of the Moon for the first time since Apollo 17 in 1972, to include the first woman and person of color to step foot on our nearest celestial neighbor. But seeing SLS going from a concept to literally sitting on the launchpad has been quite the journey.

“NASA has a very specific process that a rocket goes from design to development, testing, and preparation for flight,” explains Dr. Cobb. “This process helps ensure that all the rocket components and systems meet their requirements and communicate properly with the launch systems. This is especially important when a rocket will carry people. The first thing we did was define what capabilities the rocket needed to have to make deep space exploration possible for humans. A group of the best NASA experts from across the agency looked at thousands of concepts and selected the basic architecture for the SLS. Then the rocket went through a series of detailed design reviews, and once that design was approved, the components of the rocket were built, integrated, and tested.”

While SLS has a planned mission duration of almost a month and a half, the exact number of days per mission will depend on the launch date:

Should these dates prove unsuitable, the next launch window opens in late September. Since SLS will be flying to the Moon, all launch dates are determined based on the Moon’s position relative to the Earth. This ensures SLS can successfully orbit the Moon while also allowing illumination by the Sun on the Orion capsule throughout the mission.

The launch of SLS will no doubt usher in a new era of human exploration to the Moon and eventually Mars, with Dr. Cobb noting that SLS is “truly a remarkable investment that makes human space exploration to deep space possible.”

“The Space Launch System rocket give us the unique ability to send humans and large cargos to many deep space destinations,” says Dr. Cobb. “The Artemis missions to the Moon are the first step and will be the first time many members of the Artemis generation have seen people on the lunar surface. SLS provides NASA and the world with that capability to send humans to the Moon where we can stay for longer periods than we did during the Apollo missions. We need to understand how humans will live and work on a celestial body independent of easily accessible Earth resources. We’ll need to do that to prepare for human missions to Mars.”

For now, SLS patiently—and proudly—awaits its maiden flight, and NASA is no doubt keeping its fingers crossed that it launches sooner than later.