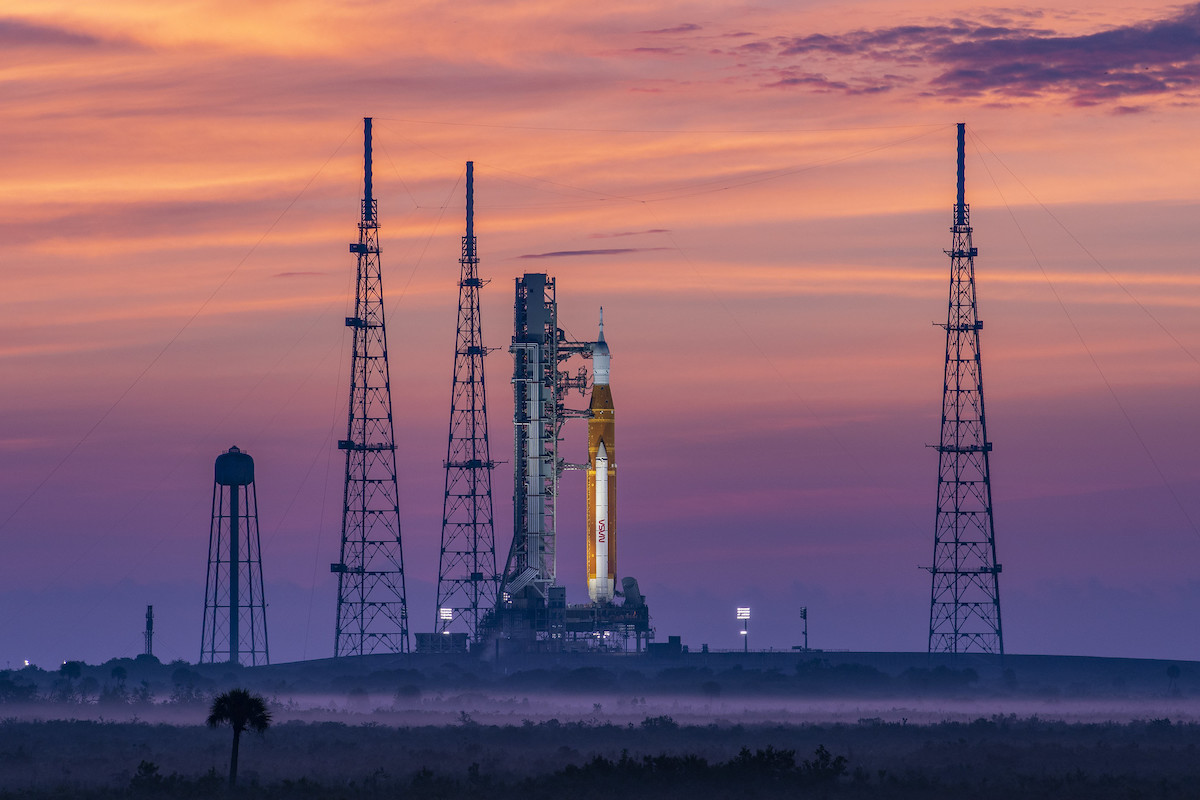 Five decades after the final flight of NASA’s legendary Saturn 5 moon rocket, the U.S. space agency is poised to launch its most powerful rocket yet Monday for a critical, long-overdue test flight, sending an unpiloted Orion crew capsule on a 42-day voyage around the moon.

Running years behind schedule and billions over budget, the first Space Launch System — SLS — rocket is finally ready for blastoff from pad 39B at the Kennedy Space Center at 8:33 a.m. EDT Monday, the opening of a two-hour window. Forecasters are predicting a 70% chance of good weather.

Backup launch opportunities are available September 2 and 5 based on the planned trajectory and the ever-changing positions of the Earth and moon. After that, the flight likely would slip into October.

Cobbled together from left-over space shuttle components, a new core stage and a modified upper stage borrowed from another rocket, the SLS rocket stands 322 feet tall and will weigh 5.75 million pounds after 750,000 gallons of supercold liquid oxygen and hydrogen rocket fuel are pumped aboard early Monday. (More details in NASA’s SLS Reference Guide.)

At liftoff, the SLS will generate a ground-shaking 8.8 million pounds of thrust from four shuttle-era hydrogen-fueled engines and twin solid rocket boosters packed with 25% more propellant than their shuttle predecessors, providing a breathtaking spectacle for thousands of spaceport workers, area residents and tourists.

“I’m afraid that people think it’s routine,” NASA Administrator Bill Nelson told CBS News. “But when those candles light off, it’s anything but routine. It is high-wire act all the way up. … This is a big deal. And it is beautiful. And it is a monster! The size just overwhelms you.” 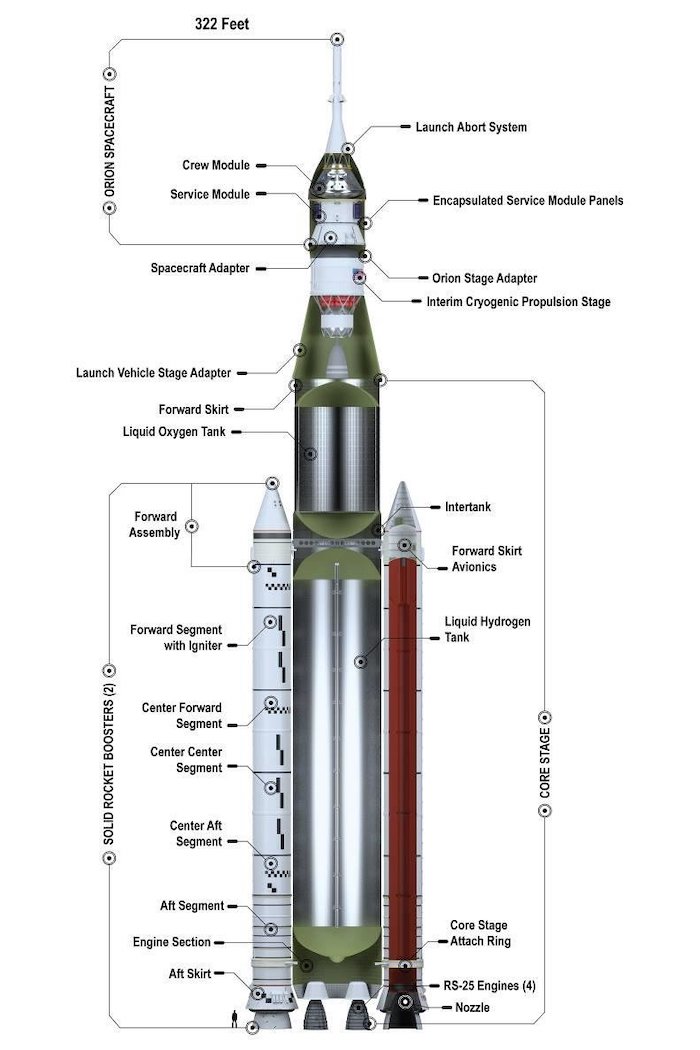 The primary goal of the Artemis 1 mission is to send Orion to orbit around the moon and in the process, set up a 25,000-mph plunge back into Earth’s atmosphere on October 10. The top priority of the mission is to make sure the capsule’s 16.5-foot-wide heat shield can protect returning astronauts from the 5,000-degree inferno of re-entry on a future flight.

“This is a test flight. It’s not without risk,” Bob Cabana, a former shuttle commander and now a NASA associate administrator, said of the first SLS flight. “We have analyzed the risk as best we can and we’ve mitigated it as best we can. But we are stressing Orion beyond what it was actually designed for in preparation for sending it to the moon with a crew.

“And we want to make sure it works absolutely perfectly when we do that and that we understand all the risks,” he said. “We’re going to learn a lot from this test flight.”

Returning Americans to the moon

If the unpiloted Artemis 1 test flight goes well, NASA plans to launch four astronauts atop the second SLS rocket for an around-the-moon shakedown flight in 2024 — Artemis 2 — before the first woman and the first person of color touch down near the moon’s south pole in 2025 or 2026.

After that, NASA intends to launch a steady stream of Artemis moon missions, sending astronauts to the south polar region once every year or so for research and to search for ice deposits in permanently shadowed craters, a resource future crews could convert into rocket fuel, air and water.

But first, Artemis astronauts and spacecraft have to get there. And that requires a rocket capable of boosting the men, women and machines out of Earth’s gravitational clutches and across the 240,000-mile gulf to the moon with sufficient fuel, supplies and equipment to mount a meaningful mission and get the crew safely home when it’s over.

“It’s going to change the way in which we explore. It’s going to return our nation to the moon, and it is going to pave the way for our next steps as we prepare to go someplace like Mars, and even destinations beyond.”

The initial 322-foot SLS “block 1” version can lift 95 tons of payload and propellant to low-Earth orbit and can send 27 tons on to the moon. It is the only rocket in the world that can boost that much material to the moon in a single flight and it is the only heavy lifter that is already “human rated.”

Future block 1B and 2 variants, the former using a more powerful four-engine Exploration Upper Stage and the latter using both the EUS and more powerful boosters, will stand more than 350 feet tall and be capable of lifting between 38 and 47 tons of payload to the moon.

A mega rocket from SpaceX

But the SLS is not the only mega rocket currently in development. SpaceX is building an even more ambitious rocket, one that dwarfs the SLS and anything else on the drawing board: a fully reusable two-stage monster known as the Super Heavy-Starship.

The Super Heavy first stage will generate a record 16 million pounds of thrust from 33 methane-burning Raptor engines while the Starship upper stage, equipped with six Raptors, life support systems and crew accommodations, is designed to carry passengers and cargo to the moon and beyond on NASA-sponsored flights or purely commercial ventures.

SpaceX says the 394-foot-tall 30-foot-wide rocket will be able to deliver 100 tons or more to the moon, twice the capability of even the SLS Block 2. But the Super Heavy-Starship can’t do it in a single flight. Multiple launches of Starship tankers will be required to refuel moon-bound ships before they leave Earth orbit and a major delay or launch mishap could have significant consequences. 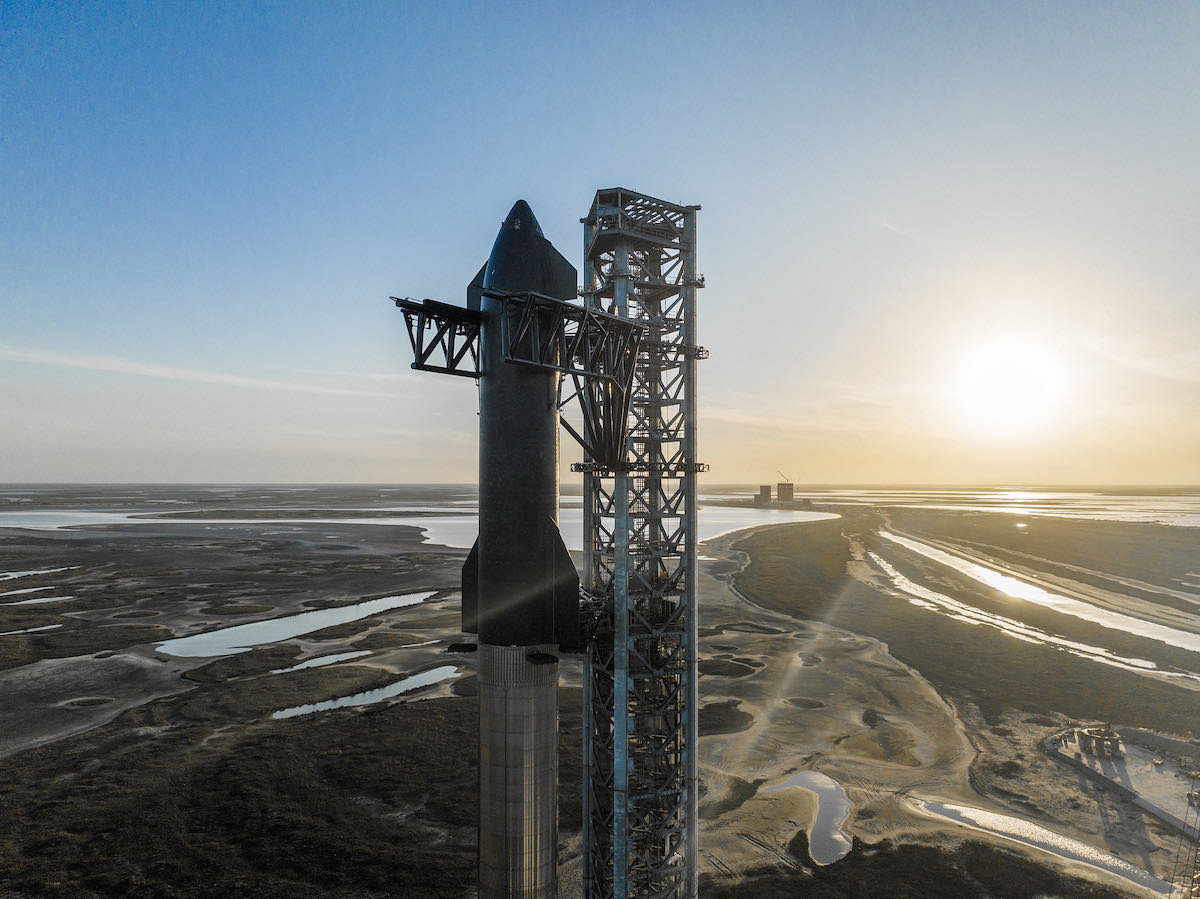 No country or company has ever carried out orbital refueling on such a massive scale and it’s a capability SpaceX has yet to demonstrate.

But Musk is confident the system will work. SpaceX already is designing a Starship variant to serve as NASA’s initial Artemis moon lander under a $2.9 billion contract, and the ability to refuel the ship in Earth orbit will be required.

“Orion is built as a deep space exploration vehicle, SLS is meant to take it there. That’s what SLS does,” said Jim Free, NASA’s director of exploration systems. “Obviously, SpaceX is a partner (and) we buy into what SpaceX is trying to do. But right now, they don’t have the capability that SLS does.”

According to NASA’s Inspector General, the U.S. space agency “is projected to spend $93 billion on the Artemis (moon program) up to FY 2025.”

“We also project the current production and operations cost of a single SLS/Orion system at $4.1 billion per launch for Artemis 1 through 4, although the Agency’s ongoing initiatives aimed at increasing affordability seek to reduce that cost.”

Among the causes listed as contributing to the SLS’s astronomical price tag: the use of sole-source, cost-plus contracts “and the fact that except for the Orion capsule, its subsystems and the supporting launch facilities, all components are expendable and ‘single use’ unlike emerging commercial space flight systems.”

In stark contrast to SpaceX’s commitment to fully reusable rockets, everything but the Orion crew capsule is discarded after a single use. As SpaceX founder Musk likes to point out, that’s like flying a 747 jumbo jet from New York to Los Angeles and then throwing the airplane away.

“That is a concern,” Paul Martin, the NASA inspector general, said in an interview with CBS News. “This is an expendable, single-use system unlike some of the launch systems that are out there in the commercial side of the house, where there are multiple uses. This is a single-use system. And so the $4.1 billion per flight … concerns us enough that in our reports, we said we see that as unsustainable.” 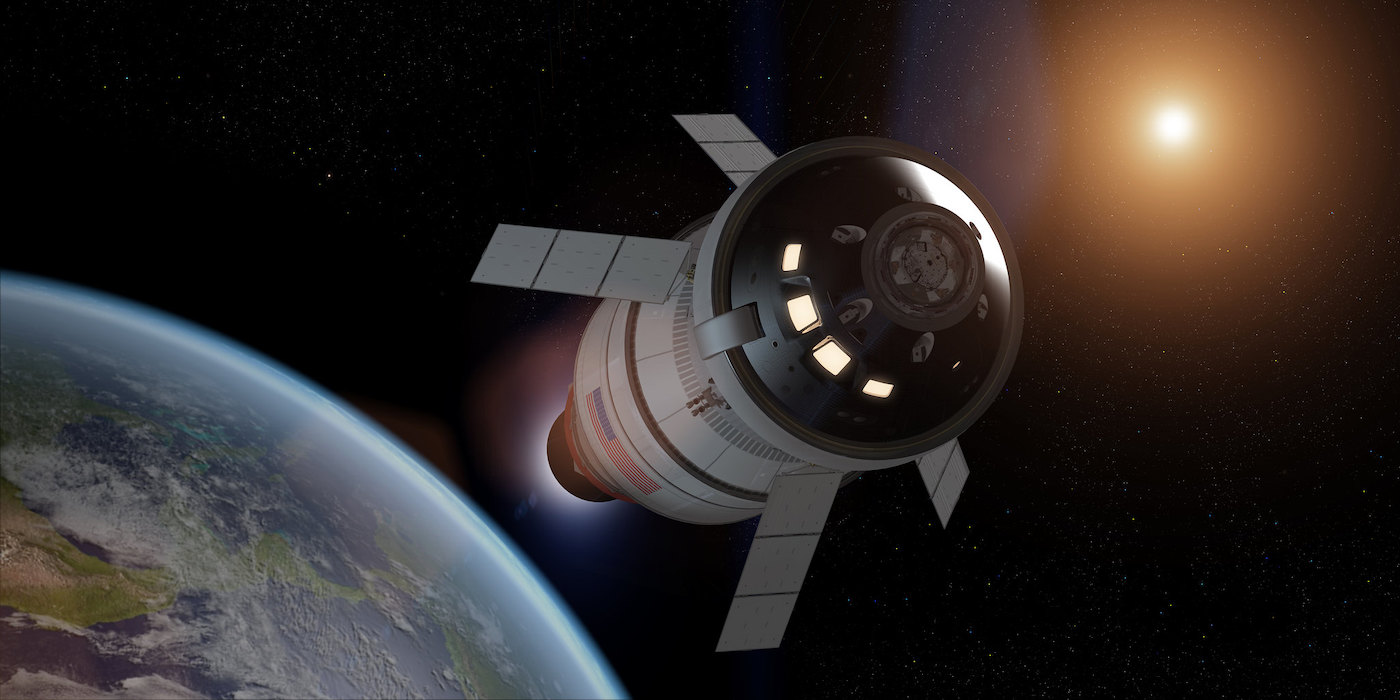 Artist’s illustration of an Orion spacecraft with the upper stage of its Space Launch System rocket firing during a trans-lunar injection burn. Credit: NASA

But the SLS has one clear near-term advantage: flight-tested components. When it approved the SLS project at the end of the space shuttle program, Congress required NASA to use available hardware if possible.

And the SLS is ready to go.

As for the high cost, Marcia Smith, a Washington-based space analyst, said in an email exchange that “money isn’t always the most important factor. For SLS, preserving jobs, not just jobs per se, but high-tech jobs in a sector important for national security, is a strong motivation.”

“If, as a nation, it is critical to lead the world in space exploration, do you want to put all of your eggs in the billionaire space enthusiast basket? Bet it all on people who could change their minds and walk away or suffer illness or worse? They are single point failures.”

If the SLS suffers a catastrophic failure, “the story could change,” she added. “But even then I’m not sure. Not everyone is convinced that the private sector is reliable enough to bet the nation’s space leadership on public-private partnerships.”