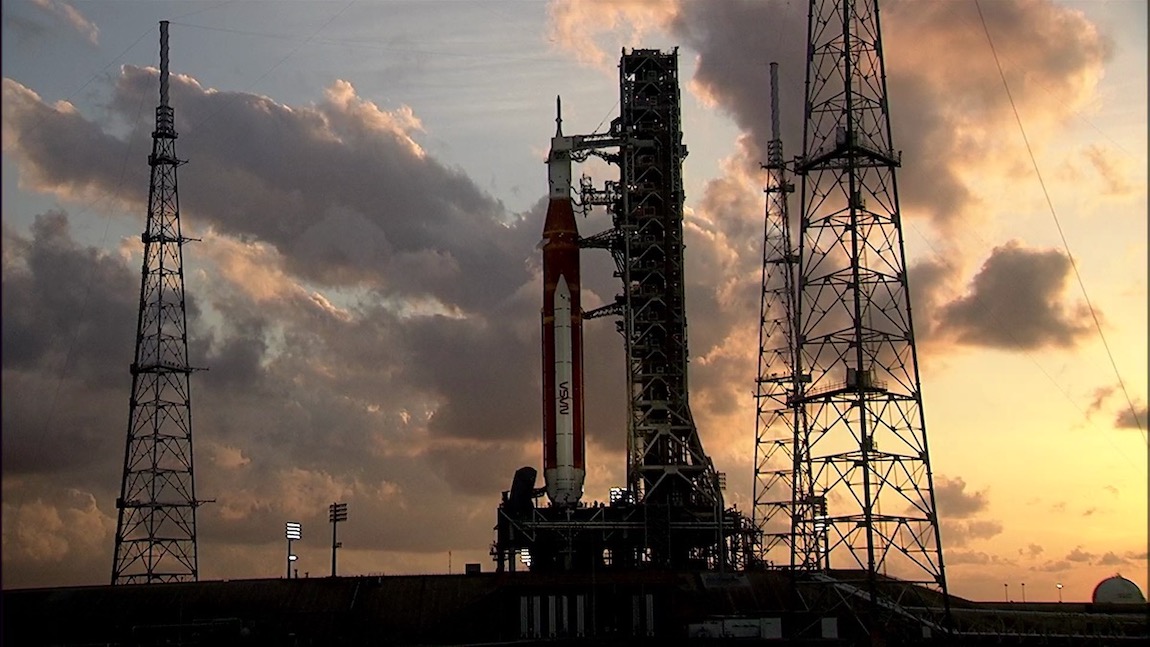 NASA loaded more than three-quarters of a million gallons of super-cold propellant into the first Space Launch System moon rocket Monday in Florida, achieving key milestones in a practice countdown but falling short of all the test objectives after discovering a new hydrogen leak.

In development for more than a decade, the giant moon rocket was fully loaded with more than 2 million pounds of propellants, the first time the entire vehicle has been filled with fuel and oxidizer. Technical glitches prevented the launch team from completing the propellant loading procedures during a series of test countdowns in April.

Charlie Blackwell-Thompson, NASA’s Artemis launch director, said in an interview Monday evening on NASA TV that it was “definitely a good day.”

The Artemis launch team loaded 755,000 gallons of liquid hydrogen and liquid oxygen — chilled to minus 423 degrees and minus 297 degrees Fahrenheit — into the Space Launch System’s core stage and upper stage Monday at the Kennedy Space Center. Engineers evaluated several problems during the practice countdown, including a hydrogen leak in a quick disconnect fitting between the SLS core stage and the mobile launch platform at pad 39B.

The hydrogen leak is in a different connection than the leak engineers detected during a previous fueling attempt two months ago. That problem was apparently fixed after NASA rolled the moon rocket off the launch pad and back to the Vehicle Assembly Building for repairs.

Blackwell-Thompson said it was premature to decide on the next steps for the Artemis 1 launch campaign. Officials said getting through the practice countdown, or Wet Dress Rehearsal, was a prerequisite for continuing with preparations for the launch of the Artemis 1 test flight, the maiden launch of the 322-foot-tall (98-meter) SLS moon rocket to send an Orion crew capsule around the moon.

The Artemis 1 mission won’t carry astronauts, but NASA hopes a successful test flight will pave the way for a crew of four to fly around the moon on the Artemis 2 mission — the next SLS/Orion flight — no earlier than 2024. Future Artemis flights will include moon landings with astronauts, the first crewed lunar visit since 1972.

But the earlier-than-planned cutoff of the countdown, as well as the unresolved hydrogen leak, will require reviews and troubleshooting from the Artemis team at the Kennedy Space Center.

“Like any test we run, we’ll go take the data, we’ll go look at what we got we got and look at the couple of things that we didn’t get, and we’ll lay out a plan for how we go forward,” Blackwell-Thompson said.

NASA officials extended a hold in the countdown Monday several hours to troubleshoot the hydrogen leak. An attempt to eliminate the leak by warming up the connector and then chilling it back down to cryogenic temperatures did not work.

Engineers devised a plan to proceed into the final 10 minutes of the countdown by masking the hydrogen leak from the countdown sequencer, the computer that oversees the fast-paced events and checks to ready the rocket for launch. Derrol Nail, the NASA TV commentator for the Monday’s test, launch team also closed a bleed valve earlier than it would normally shut during the countdown to stop the flow of hydrogen through the leaky connector.

The countdown clock resumed at T-minus 10 minutes, with NASA managers hoping to proceed until T-minus 9.34 seconds, the planned cutoff point for the test. After hours of delays, NASA officials skipped over a planned second run through the terminal countdown sequence, instead focusing on one run.

The four RS-25 engine nozzles, leftover hardware from the space shuttle program, vectored through a steering profile in the final three minutes of the countdown.

The clock stopped at T-minus 29 seconds at 7:37 p.m. EDT (2337 GMT), just one second after control of the countdown switched from the ground launch sequencer to the automated launch sequencer controlled by the rocket’s flight computer. The countdown cutoff occurred about 20 seconds before the planned hold time of T-minus 9 seconds.

The launch team then secured the rocket and depressurized the tanks, allowing engineers to begin draining cryogenic propellants loaded into the launcher earlier in the day.

Some of the final countdown procedures not accomplished Monday included the activation of the hydraulics on each of the rocket’s side-mounted solid-fueled boosters, which will provide most of the 8.8 million pounds of thrust at liftoff. That was expected in the final 30 seconds of the countdown, after the time of the cutoff at T-minus 29 seconds.

Blackwell-Thompson said Monday that getting through most of the final 10 minutes of the countdown, despite the hydrogen leak, was a “big milestone.”

In the “terminal count, there’s a number of functions that we go through and we test as part of the final readiness for launch, and we have done this many times in a sim, but we haven’t done it with cryogenics on the vehicle,” she said.

“So today, we got all stages to replenish,” Blackwell-Thompson said. “That was a big milestone for us, getting both the core stage and upper stage into replenish, and our team really wanted to get into terminal count and work through those milestones and see how we performed, how the team performed, and how the hardware performed, and they both performed very well.”

NASA officials plan to host a teleconference with news media Tuesday to discuss more details about the practice countdown, and preview options for the coming days and weeks. It was not immediately clear whether NASA will decide to mount a fifth WDR, or if managers might be satisfied with Monday’s results and move the SLS moon rocket back to the assemble building for repair of the hydrogen leak and final pre-launch processing.

Either way, ground teams at Kennedy will need to roll the launcher back to the hangar for installation and outfitting of the rocket’s range safety destruct system before pressing on with a real countdown and liftoff.

Other issues encountered during Monday’s countdown demonstration included a faulty redundant valve controller on a gaseous nitrogen purge system at Kennedy, which is used to purge the rocket of flammable gases during the countdown. Technicians replaced the valve assembly, located about a mile from the launch pad, allowing the countdown to proceed.

There was also a small grass fire at pad 39B near the flare stack used to burn off hydrogen. But NASA officials decided to allow the fire to burn itself out, and it was not a major concern, according to Nail, the NASA TV commentator. 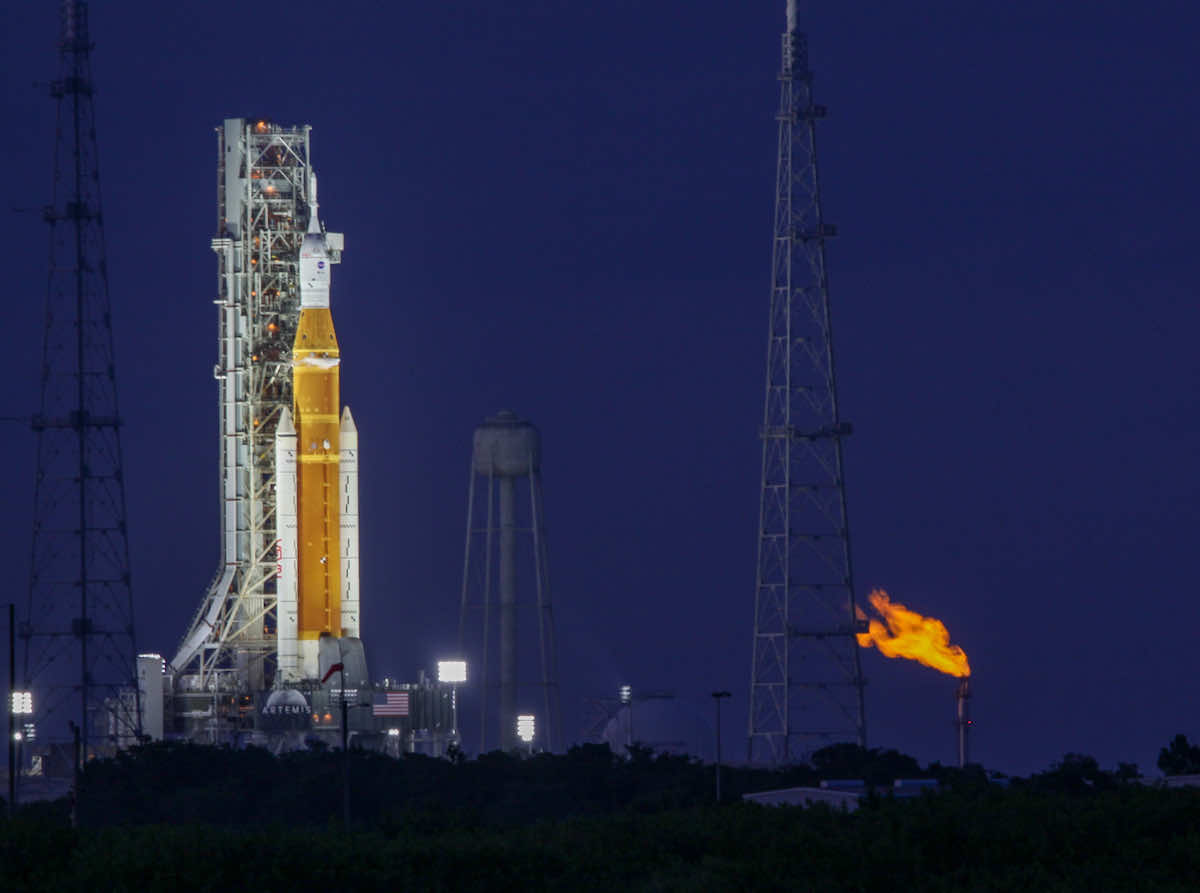 A flame hydrogen flare stack is visible at pad 39B shortly after the end of the Artemis 1 wet dress rehearsal on June 20. Credit: Stephen Clark / Spaceflight Now

In the run-up to the Artemis 1 launch, NASA teams at Kennedy stacked the SLS moon rocket and rolled the launcher to pad 39B for the first time March 18 in advance of the first WDR attempt.

But a series of technical snags prevented NASA’s launch team from completing the countdown rehearsal in April.

A problem with ground equipment at the launch pad delayed the test a day from April 3, then the launch team ran into issues with the supply of nitrogen gas to the launch pad.

A fueling attempt April 4 was cut short by concerns about the temperature of liquid oxygen flowing into the rocket’s core stage, then engineers discovered problem with a helium valve on the SLS upper stage.

The helium valve issue prevented the launch team from pumping propellants into the upper stage on the next fueling attempt. But NASA tried again April 14 to load cryogenic propellants into the core stage, and ran into more problems with the nitrogen supply. After temporarily overcoming the nitrogen issue, the launch team detected indications of a hydrogen leak near an umbilical connection at the bottom of the core stage.

NASA officials then decided to return the rocket to the VAB for repairs in late April. Workers inside the VAB replaced the helium valve on the upper stage and tightened fittings to fix the leak, then transferred the rocket back to pad 39B on June for Monday’s practice countdown.