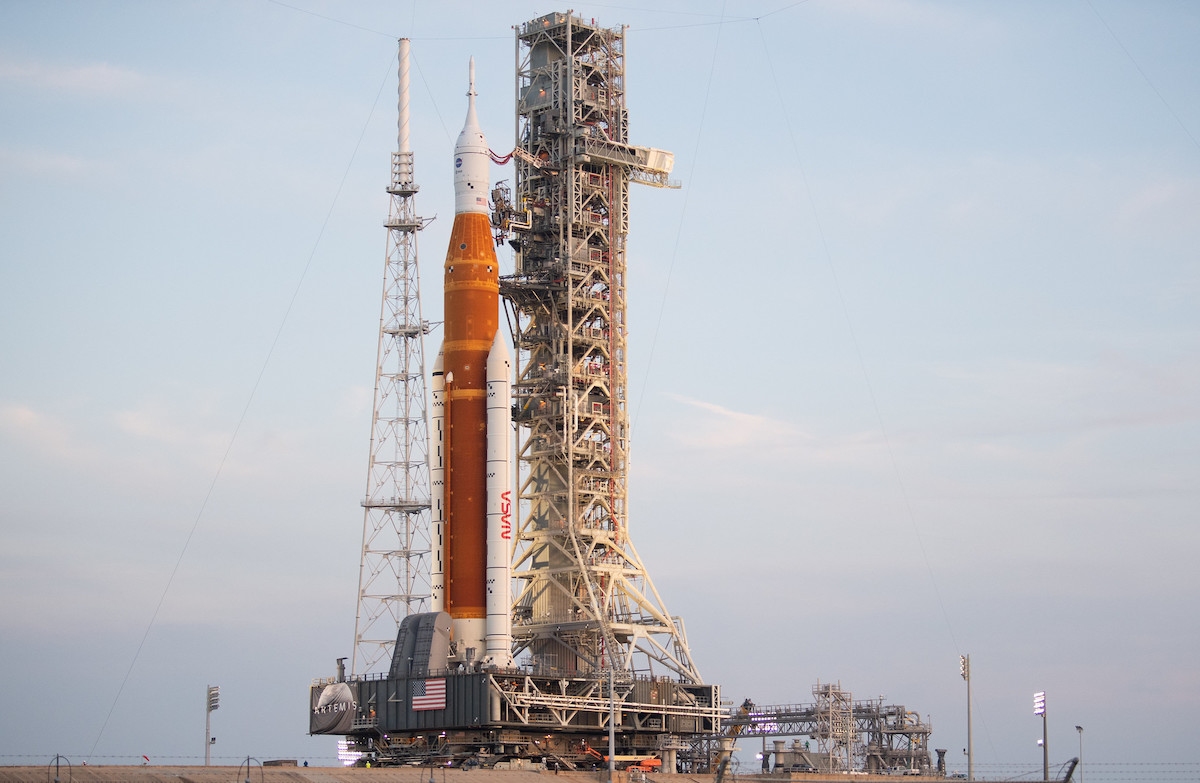 NASA’s towering 322-foot-tall (98-meter) Space Launch System moon rocket and Orion spacecraft arrived at their seaside launch complex early Wednesday after an overnight rollout from an assembly building at the Kennedy Space Center, moving a step closer to liftoff no earlier than Aug. 29 on an unpiloted test flight around the moon.

After four countdown dress rehearsals earlier this year, NASA officials decided to press ahead with preparations for the inaugural launch of the SLS moon rocket. The countdown tests revealed hydrogen leaks and issues with ground support equipment at the space center, but NASA managers say those issues have been resolved, allowing the launch campaign to proceed.

More than a decade in development, the Space Launch System is the most powerful rocket — in terms of total thrust — ever built by NASA. The 8.8 million pounds of thrust produced by the rocket’s four liquid-fueled Aerojet Rocketdyne RS-25 core stage engines and two Northrop Grumman-built solid rocket boosters amounts to nearly 15% more power than NASA’s Saturn 5 moon rocket from the Apollo program.

The rocket is central to NASA’s Artemis program, with the goal of returning astronauts to the surface of the moon later this decade. If the Artemis 1 test flight goes well in the coming weeks, NASA plans to equip the second SLS moon rocket and a crew-rated Orion spacecraft for the Artemis 2 mission in 2024 to send four astronauts on a trip around the moon.

Future Artemis flights will involve commercial moon landers and a mini-space station to be built in orbit around the moon.

With the testing and repairs complete inside the Vehicle Assembly Building, NASA moved one of its diesel-powered crawler-transporters underneath the SLS moon rocket’s mobile launcher earlier this week. The crawler’s departure from the VAB was delayed about an hour Tuesday night to wait for a thunderstorm cell to move away from the space center.

NASA clocked first motion of the crawler at 9:55 p.m. EDT (0155 GMT). After clearing the tall vertical doors of the VAB high bay, the crawler paused to allow ground teams to swing the mobile launch tower’s crew access arm away from the Orion spacecraft. With the arm secured for travel, the crawler resumed its movement and reached a top speed just shy of 1 mph.

The moon rocket, mobile launch platform and crawler weighed about 21.4 million pounds during the 4.2-mile (6.8-kilometer) trip to Launch Complex 39B, following the rock-covered crawlerway along the route to the pad.

The crawler navigated the incline leading up to pad 39B around sunrise Wednesday, using its hydraulic jacking and leveling system to keep the SLS moon rocket perfectly vertical.

Once in position over the pad’s flame trench, the crawler lowered the mobile launch platform onto support pedestals. The rocket was declared “hard down” at the launch pad at 8:03 a.m. EDT (1203 GMT), a NASA spokesperson said. The rollout took 10 hours and 8 minutes.

The rollout overnight Wednesday marked the third time NASA has moved the huge rocket to the launching stand, following rollouts in March and June for countdown demonstration tests. NASA succeeded in fully loading the rocket with more than 750,000 gallons of cryogenic liquid hydrogen and liquid oxygen propellants for the first time June 20.

Final closeouts, inspections and tests are planned over the next couple weeks. Ground teams will load hydrazine fuel into the solid rocket booster’s hydraulic power units, which drive the thrust vector control system on each booster. The vectoring system is responsible for the majority of the rocket’s steering authority in the first two minutes of the flight.

The SLS moon rocket’s Boeing-built core stage will fire its engines about eight minutes, then an upper stage produced by United Launch Alliance will fire two times to send the Orion spacecraft toward the moon. The Orion capsule, made by Lockheed Martin, will maneuver into a distant retrograde orbit around the moon for checkouts ahead of future crew missions.

Assuming the launch occurs Aug. 29, the Orion spacecraft would return to Earth for a splashdown in the Pacific Ocean off the coast of California on Oct. 10.

NASA has backup launch opportunities available Sept. 2 and Sept. 5. If the launch doesn’t happen by the first week of September, NASA will have to return the SLS moon rocket back to the Vehicle Assembly Building for re-testing of its flight termination system, a range safety mechanism that would destroy the launcher if it flew off course and threatened populated areas.

That would likely delay the Artemis 1 launch until late September or early October, well into the mission’s next two-week launch period, or perhaps even to the following series of launch opportunities in mid-October.

The Artemis 1 launch periods are driven by mission requirements, such as the moon’s position in its 28-day orbit around the Earth. Mission managers are also require the trajectory not place the Orion spacecraft in shadow for more than 90 minutes, ensuring the ship’s solar panels can produce enough power throughout the flight. Officials also want the Orion capsule to splashdown in the Pacific Ocean in daylight at the end of the mission.17

Those requirements drive the Artemis 1 launch periods to cycles of roughly two weeks on and two weeks off.

The SLS test flight is a milestone in a decade-long development that started in 2011, when Congress ordered NASA to design and build a gigantic rocket using technology left over from the agency’s retired fleet of space shuttles. At that time, NASA officials hoped to launch the first SLS test flight in 2017, but the mission is now running nearly five years late.

NASA awarded Lockheed Martin the contract to develop the Orion spacecraft in 2006 under the umbrella of the agency’s Constellation moon program, which was canceled in 2010.

NASA kept the Orion program alive through two major restructurings of the agency’s deep space exploration efforts, first during the Obama administration, when Congress and the White House agreed to pivot NASA’s focus to a human mission to Mars, with an interim crewed expedition to an asteroid.

The Trump administration shifted NASA’s exploration program back to the moon. NASA dubbed the moon program Artemis, naming it for the twin sister of Apollo in Greek mythology.

Through it all, the Orion program survived. NASA has committed $14.2 billion to develop the Orion spacecraft from 2012 through the end of this fiscal year Sept. 30, plus an additional $6.3 billion spent on the program in the prior decade under the Constellation program.

NASA has budgeted $22.4 billion for the SLS program from 2012 through the end of this fiscal year. Another $5.4 billion in the same period went toward readying Kennedy Space Center’s ground infrastructure for SLS and Orion missions.