After reviewing the data from Monday’s scrubbed launch attempt for the Space Launch System/Artemis- 1 test flight, NASA’s Mission Management Team feels the rocket and the launch team will be ready for another try at the program’s maiden launch on Saturday, September 3. The two-hour launch window starts at 2:17 pm EDT (18:17 UTC).

“We got a good nights’ sleep and we reviewed all the data,” NASA’s Artemis mission manager Mike Sarafin told reporters today (Tuesday). “We agreed to move launch date to Saturday, September 3, but we will continue to review and evaluate all the data,” and make a final determination by September 1, Sarafin said.

If the launch does not occur Saturday, officials said the scrub turnaround could be as soon as 48 hours, or Monday September 5. But that would be the case only if the launch would be called off due to weather. Any technical issues would likely delay the launch even further.

During the launch attempt on August 29, the main problem was due to an “engine bleed” issue, which effectively means that one of the four main engines could not be properly chilled to temperatures needed for ignition at launch. However, after reviewing the data, the team feels that the SLS rocket’s engine number 3’s temperature issue was very likely due to a faulty sensor, rather than the engine not reaching its desired chilldown temperature. 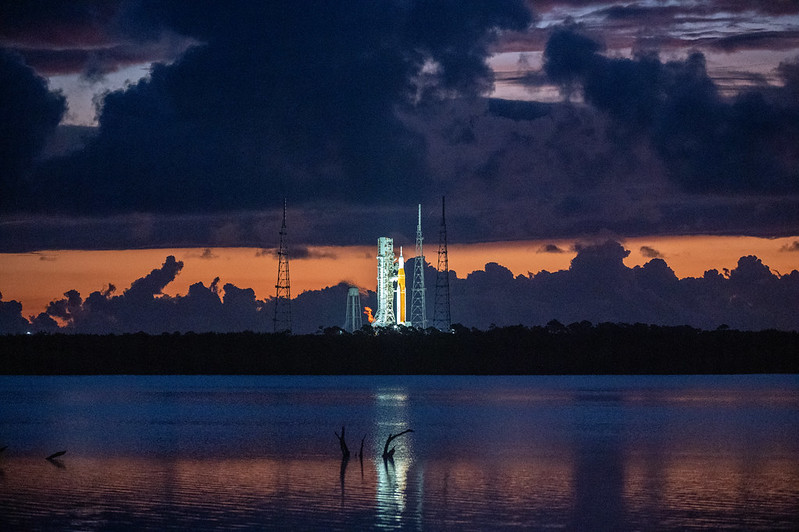 NASA’s Space Launch System (SLS) rocket with the Orion spacecraft aboard at Launch Pad 39B, Monday, Aug. 29, 2022 during the first launch attempt of the Artemis program. Credit: NASA/Keegan Barber.

“We did see that we had one engine that was reading a little out of family from the others,” said launch director Charlie Blackwell-Thompson. “We did some troubleshooting to try to bring that back, but that was not successful, and it was outside the bounds of launching.”

Even though they feel the problem came in the instrumentation, the teams will start engine chill earlier in the countdown in an attempt to have the RS-25 engines ready for ignition. This will replicate a timeline that was used successfully during a previous test of the engines.

If they still get the low temperature readings during Saturday’s countdown, Honeycutt said they will rely on other factors to determine if they will go ahead with the launch.

“We will have a plan for a go-no go that day,” he said, “but I’m anticipating we are not going to get any better results on the temperature bleed sensor on engine 3.”

Another factor on Saturday’s launch attempt might be the weather. Launch Weather Officer Mark Berger said the weather forecast favors showers and thunderstorms moving into the morning and early afternoon, but he’s optimistic there will be some “clear air” for parts the launch window. Morning storms could delay filling the fuel tanks. we’ will have some clear air for window, but have showers in the area and that could delay tanking.

“The probability of weather violation at any point in the countdown still looks to me rather high,” Berger said, and it would be somewhere in the neighborhood of 60%. Berger said while that’s high, he expects showers to be sporadic, and feels there will be a good opportunity to launch.

The Artemis-1 flight will be the first full integrated test of the super heavy-lift SLS launch vehicle and the Orion capsule. The flight will last several weeks, and go further into space than all the Apollo missions. This will test out not only the rocket and spacecraft but also the supporting ground systems and teams. If all goes well, NASA will announce the crew and schedule for a crewed Artemis 2 flight around the Moon, likely in 2024 and the crewed Artemis 3 Moon landing mission would follow, perhaps in 2025.

The post NASA Will Try Again on September 3 For First Launch of Artemis appeared first on newsastronomy.com.