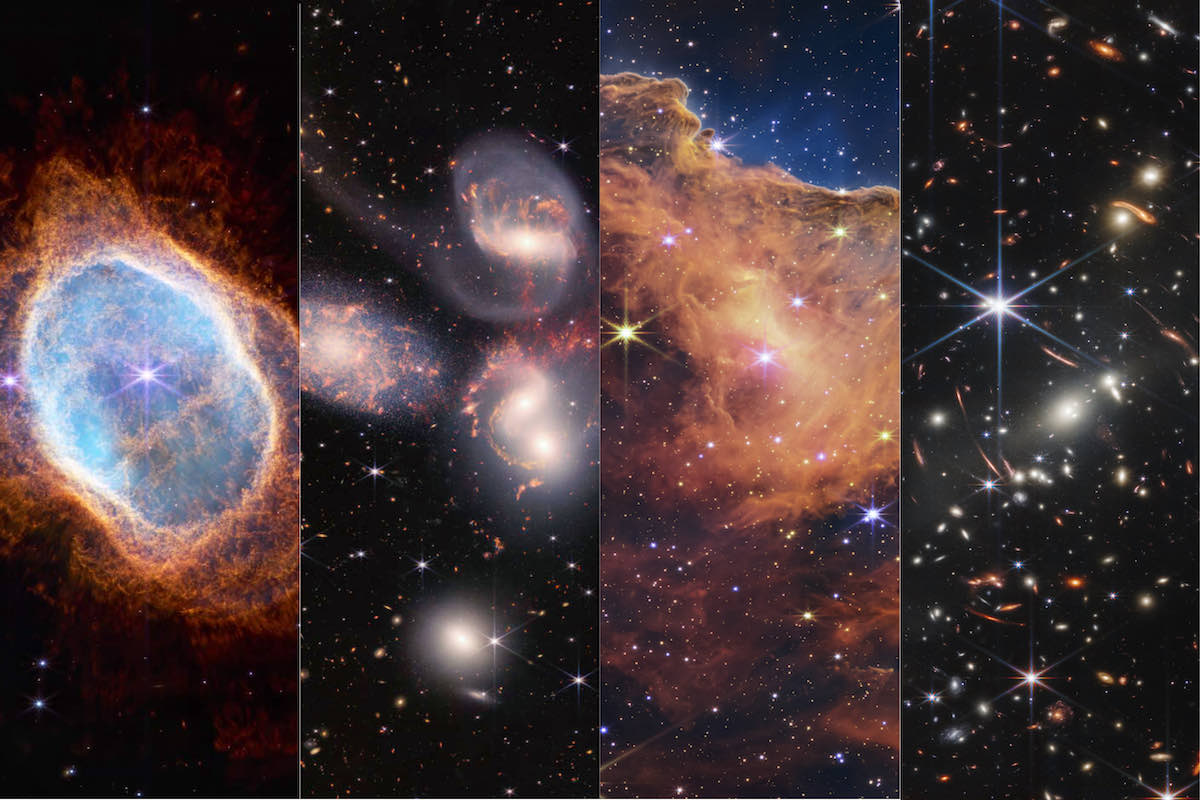 Even to the untrained eye, the images carry the observer well beyond the realm of the iconic Hubble Space Telescope, which has produced a steady stream of discoveries and spectacular images over the past three decades. But to astronomers, the views from Webb are nothing short of breathtaking.

“From the data I’ve seen so far, from the work we’ve seen in commissioning and then this first week of science, yeah, this is going to be revolutionary,” said Jane Rigby, the Webb operations project manager at the Goddard Space Flight Center in Greenbelt, Maryland. “These are incredible capabilities we’ve never had before.”

“We’re making discoveries and we really haven’t even starting trying yet,” he said. “The promise of this telescope is amazing.”

Warmed up by pom pom-waving cheerleaders chanting “J-W-S-T, J-W-S-T,” NASA Administrator Bill Nelson, senior agency managers and a throng of enthusiastic Webb engineers and scientists gathered in an auditorium at Goddard to collectively share the moment the images were revealed, one at a time.

“In the words of the famous Carl Sagan, somewhere, something incredible is waiting to be known,” Nelson said in introductory remarks. “I think those words are becoming reality.”

First up was the the spectrum of starlight passing through the atmosphere of an exoplanet 1,150 light years from Earth, a world half the size of Jupiter that orbits its star closer than Mercury orbits Earth’s sun. The spectrum shows the chemical fingerprint of water vapor in the planet’s hellish atmosphere.

Taking spectra of exoplanet atmospheres is not new, but Webb’s sharper infrared vision dramatically advances the state of the art, allowing more data to be collected in less time. Astronomers may someday be able to detect the effects of biological activity on planets in far-flung solar systems by studying the compounds in their atmospheres.

No one is promising any such achievements from Webb, but the ability to analyze exoplanet atmospheres with the world’s most powerful infrared telescope is a major step in that direction. 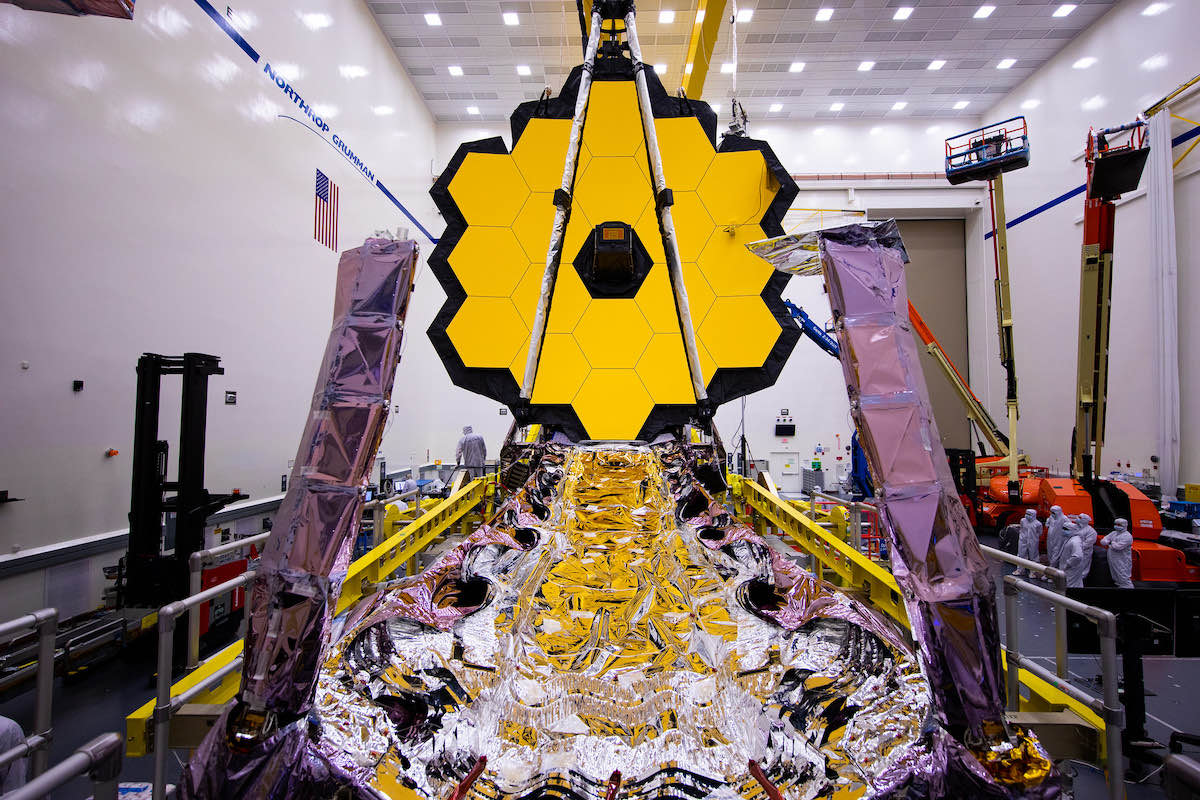 Next up was a stunning view of the Southern Ring Nebula, a half lightyear-wide cloud of expanding gas and debris thrown off by a central star nearing the end of its life as its core runs out of nuclear fuel and fusion grinds to a halt. It’s a fate that awaits the sun in another five billion years or so.

Hubble’s earlier view of the Southern Ring Nebula was spectacular in its own right, showing a huge smoke-ring-like cloud surrounding a brilliant inner star. But Webb’s view goes much farther, showing not one but two stars at the heart of the nebula and much more detail in the structure of the expanding shells of gas.

Then came a mesmerizing image of Stephen’s Quintet, a well-known collection of five galaxies in the constellation Pegasus 290 million light years from Earth that was discovered in 1877, the first such close-together grouping of galaxies to be detected.

Four of the five spiral galaxies are gravitationally interacting in a slow-motion train wreck of sorts, in the process of merging to eventually become a single huge elliptical galaxy.

Galaxy mergers are a commonplace occurrence across the history of the universe, and studying the details of such collisions is one of Webb’s major objectives. The image unveiled Tuesday resolves previously unseen stars and clusters in the galaxies and even captures the light generated by debris racing around a supermassive black hole. 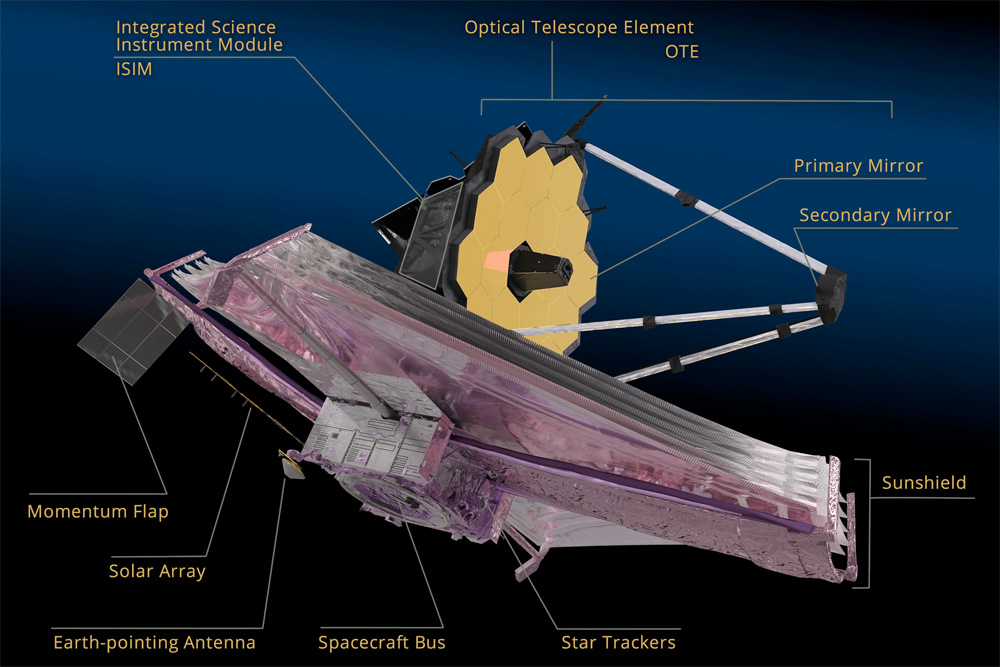 Finally, the Webb team unveiled mind-boggling view showing a segment of the Carina Nebula, a vast star-forming region in the southern constellation Carina some 7,600 light years from Earth that’s four times as large as the more famous Orion Nebula.

Visible to the unaided eye, the Carina Nebula is the home of the most luminous known star in the Milky Way as well as the Eta Carinae binary system, which includes a massive sun expected to explode in a supernova blast in the (astronomically) near future.

The portion of the nebula shown Tuesday is teeming with massive, brightly shining young stars as well as the remnants of supernova explosions marking the cataclysmic deaths of stars much more massive than the sun. Powerful solar winds blasted out from hot young stars carve the surrounding gas clouds into complexly textured structures.

The images unveiled Tuesday followed an initial release Monday at the White House when President Biden revealed a razor-sharp “deep field” look at a cluster of remote galaxies with numerous arcs of light, the distorted views of background galaxies magnified by the cluster’s combined gravity, generated primarily by unseen dark matter.

Looking farther back in space and time than ever before, to within a few hundred million years of the moment the universe exploded into being 13.8 billion years ago, the image represents “a new window into the history of our universe,” Biden said. 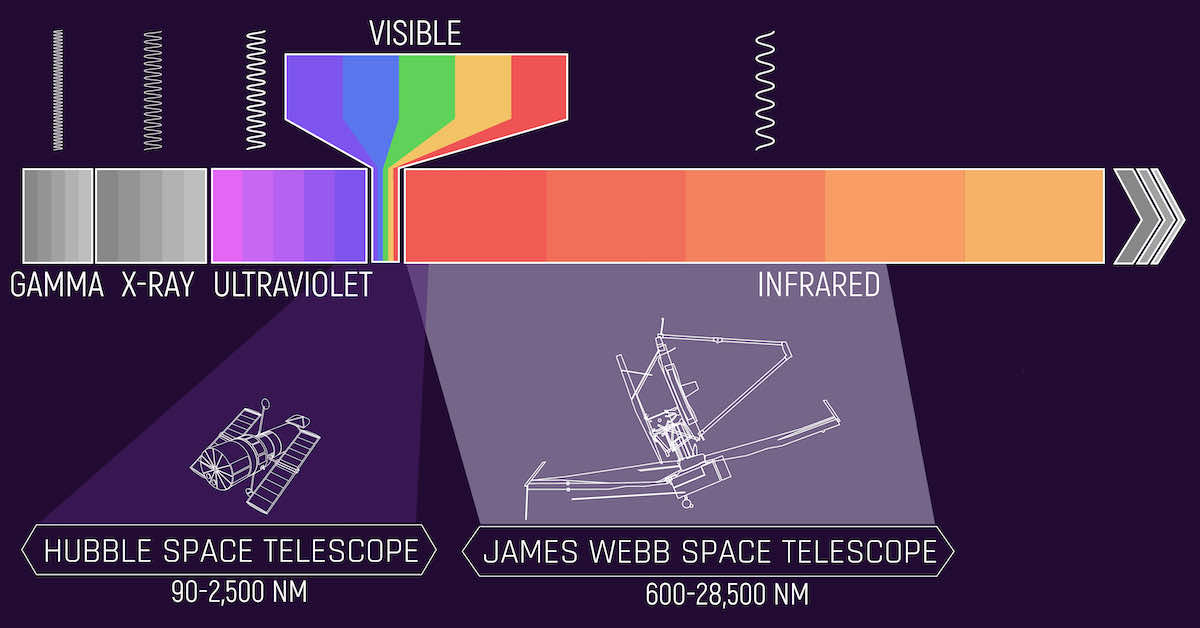 Webb’s larger primary mirror has six times the light-gathering power of Hubble’s primary mirror. This is important at the longer, dimmer wavelengths of light Webb looks at. Hubble can see some infrared wavelengths, but it was optimized to see shorter ultraviolet and visible light. As observing partners, their observations will complement each other, providing us with views across a broad range of wavelengths.
Credits: NASA, J. Olmsted (STScI)

Taken together, the pictures are clear proof, if any was needed, that Webb is finally ready to begin science operations six months after its Christmas Day launch and years of technical problems, management miscues and billions in cost overruns.

“Those releases represented five days of observation with this observatory,” said Randy Kimble, a Webb project scientist at Goddard. “And they include something that is a deeper infrared image than has ever been taken in history, deeper than Hubble images that required weeks to acquire. That was done in half a day with Webb.”

In the weeks and months since Webb’s launch, scientists and engineers deployed and precisely aligned the 18 segments making up Webb’s 21.3-foot-wide mirror, unfurled a giant sunshade to help cool the optics to within a few degrees of absolute zero and carefully checked out and calibrated the observatory’s four instruments.

Unlike the Hubble Space Telescope, which mostly observes light in the visible part of the spectrum, Webb is optimized to study longer-wavelength infrared radiation, allowing it to capture light from the dawn of the universe that’s been stretched out by the expansion of space itself over the past 13.8 billion years.

Capturing light from the first generation of stars and galaxies in the process of forming in the aftermath of the Big Bang is one of Webb’s primary objectives.

But the telescope also will be used to tackle other outstanding questions, charting the evolution of galaxies through time, how they grow and merge in cataclysmic collisions, the life cycles of stars from birth to death by supernova; and the nature of exoplanets that are as common as grains of sand across the Milky Way.

The pictures released Tuesday, along with the earlier deep field, showcase those broad themes, convincingly demonstrating that Webb, the most expensive science probe ever built, is up to the task.

“I am so thrilled, and so relieved,” said John Mather, a Nobel Prize winner and senior scientist on the Webb project. “It’s just impossible to convey how hard it really was. We risked so much to say we’re going to go do this, and it’s so near impossible. But we did it.”