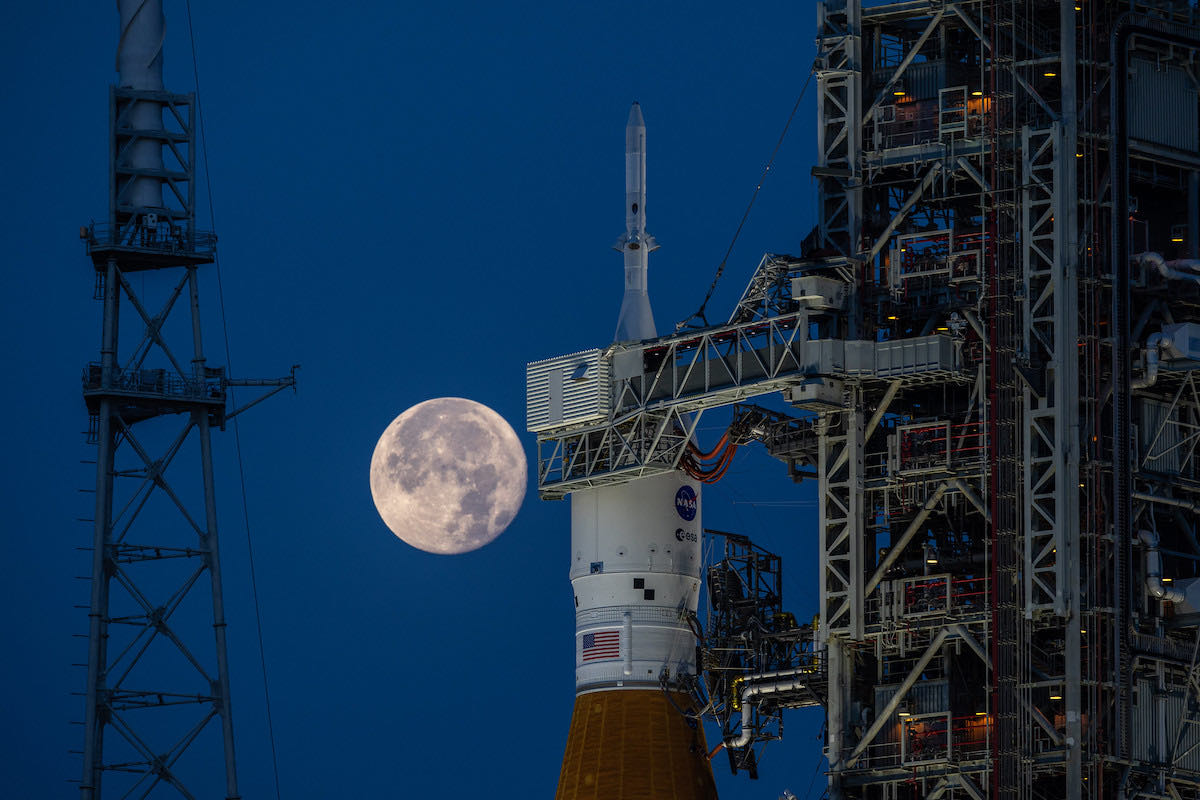 The moon hangs in the sky behind NASA’s Orion spacecraft and Space Launch System moon rocket on the launch pad at the Kennedy Space Center. Credit: NASA/Ben Smegelsky

Countdown clocks began ticking Saturday for NASA’s fourth attempt to complete a dress-rehearsal countdown and fueling test of its Space Launch System moon rocket, a requirement before the huge booster can be cleared for launch on its long-awaited maiden flight.

“There’s nobody that wants to get through this more than the EGS (Exploration Ground Systems) team, and all of our teams … to get this vehicle tanked, understand where we get to in the terminal count and then get back … out for launch,” said Jim Free, director of exploration development at NASA Headquarters.

The countdown began at 5:30 p.m. EDT and if all goes well, the two-day test will tick into its final hours Monday morning when engineers plan to remotely load the rocket’s first and second stages with three quarters of a million gallons of supercold liquid oxygen and hydrogen fuel.

Launch Director Charlie Blackwell-Thompson and her team plan to count down to T-minus 33 seconds and then carry out a recycle that will mimic an unplanned hold before counting all the way down to just inside T-minus 10 seconds. At that point, just before the rocket’s four main engines would begin their start-up sequence in an actual launch, computers will stop the test.

The goal is to make sure complex launch control software, the rocket’s electrical, mechanical and propellant systems, along with their interfaces with launch pad support equipment, will work together as required to safely launch the most powerful booster ever built for NASA.

Those complexities were on display in three previous attempts to fuel the SLS as engineers ran into problems with launch pad subsystems, unexpected propellant temperature and pressure excursions, a jammed upper stage helium valve and leaks in a fitting that connects a hydrogen fuel line to the rocket’s first stage.

Originally hauled out to pad 39B at the Kennedy Space Center on March 18, NASA moved the 330-foot-tall SLS rocket back to the Vehicle Assembly Building on April 25 to replace the helium valve, fix the hydrogen leak and carry out several other upgrades and improvements.

Hydrogen leaks are notoriously hard to pinpoint and eliminate because they typically don’t show up until the hardware is exposed to cryogenic temperatures. But Free is optimistic that work to tighten up a flange in the fuel line connector has resolved the problem.

“We fixed some things we saw around the area where we saw the leak, including going back to some of the procedures we used and the know how from the shuttle days, which we really benefited from,” he said. “Obviously, we won’t know the results of that until we actually flow the liquid hydrogen at the pad.

“We also worked on some of the loading procedures,” he continued. “We saw some things with LOX (liquid oxygen) and hydrogen that our team was actually able to go back in (and) automate those procedures, which we know will help us during the upcoming flow.”

Along with addressing the hydrogen leak, engineers replaced the helium valve after finding a bit of rubber debris lodged in the mechanism. They also modified fueling procedures to eliminate some of the pressure and temperature issues experienced earlier.

Mounted atop a powerful crawler-transporter, the SLS rocket and its mobile launch stage were hauled back out to the launch pad June 6, setting the stage for this weekend’s fourth attempt to complete the rehearsal.

Assuming the test goes well, NASA will move the rocket back to the VAB one more time for final flight preparations.

NASA hopes to finally launch the SLS in late August, boosting an unpiloted Orion crew capsule on a test flight beyond the moon and back. The first piloted mission, a flight carrying four astronauts around the moon, is planned for 2023 with a landing in the 2025 timeframe.