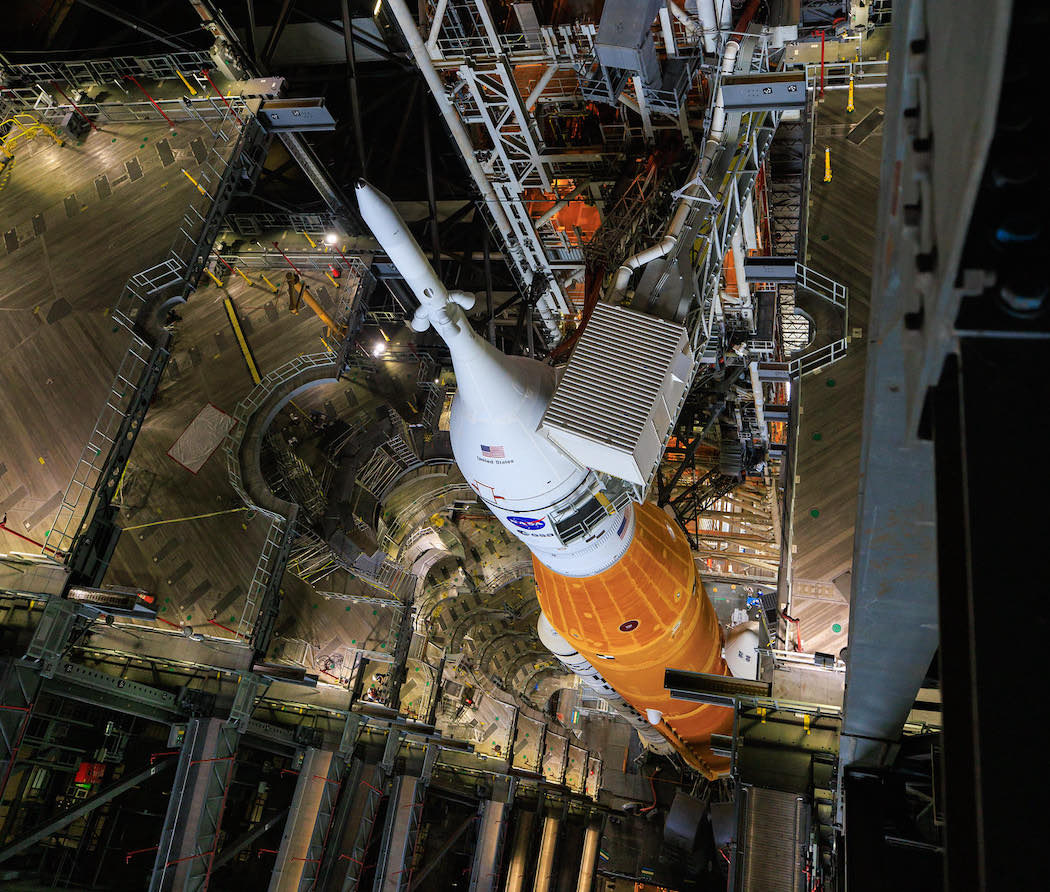 NASA is tentatively targeting Aug. 29 for the long-awaited maiden flight of the agency’s huge Space Launch System moon rocket, officials said Wednesday. But they cautioned major challenges remain for the oft-delayed mega rocket and an official date will not be set until later this summer.

As it now stands, the launch processing schedule is extremely tight and subject to change, depending on successful checkout of a repaired hydrogen line fitting, good results from end-to-end pre-flight checks of the rocket’s myriad other systems and getting everything done in time to haul it back out to the launch pad by around Aug. 18.

The repair work was completed over the weekend and while the system still must be tested amid other pre-launch preparations, NASA is holding out hope the SLS rocket can be ready for takeoff by the end of launch period 25, which runs from Aug. 23 through Sept. 6.

The next launch period after that, LP-26, opens Sept. 19 and runs through Oct. 4, but NASA planners prefer LP-25 because it offers longer daily launch windows and longer missions lasting around 40 days. Assuming an Aug. 29 launch, the Orion capsule would return to Earth 42 days later on Oct. 10.

Free said the schedule as it now stands “gets us aligned” with Aug. 29 “with what we know today.”

“Those are dates just like other missions hold, so it’s not an agency commitment,” he said. “We’ll make the agency commitment at the flight readiness review, just a little over a week before launch. But these are the dates that the team is working to.”

The long-awaited Artemis 1 launch will send an upiloted Orion crew capsule on a test flight beyond the moon and back, ending with a blistering 20,000-mph re-entry that will expose the spacecraft’s heat shield to temperatures as high as 4,000 degrees — the primary goal of the mission.

If the initial test flight goes well, NASA plans to launch four astronauts atop the second SLS rocket for an around-the-moon shakedown flight in 2024 — Artemis 2 — before sending the first woman and the first person of color to a landing near the moon’s south pole in 2025 or 2026 as part of the Artemis 3 mission.

After that, NASA plans to launch periodic Artemis moon missions, sending astronauts to the south polar region for research, exploration and to search for accessible ice deposits in permanently shadowed craters, a possible resource future crews could convert into rocket fuel, air and water.

But first, NASA must put the SLS and Orion capsule through their paces and that starts with launch of the Artemis 1 mission.

Because of fueling constraints and other factors, NASA normally will only get three launch opportunities in a given week. Complicating launch planning, the SLS can only fly when the sun, Earth and moon are aligned so the solar-powered Orion capsule is not exposed to extended periods of eclipse in Earth’s shadow. NASA also wants to ensure a daylight splashdown.

A launch on Aug. 29 takes all those factors into account. But that scenario assumes the hydrogen vent line repairs, engine compartment checks and closeouts and other pre-flight preparations can be completed in time for a rollout to the pad on Aug. 18.

Once it rolls out, NASA will have about three weeks to launch the rocket before batteries in an upper stage self-destruct system must be replaced, work that would require rollback to the Vehicle Assembly Building. In that scenario, launch would slip to the end of launch period 26 or, more likely, to launch period 27, which opens on Oct. 17. 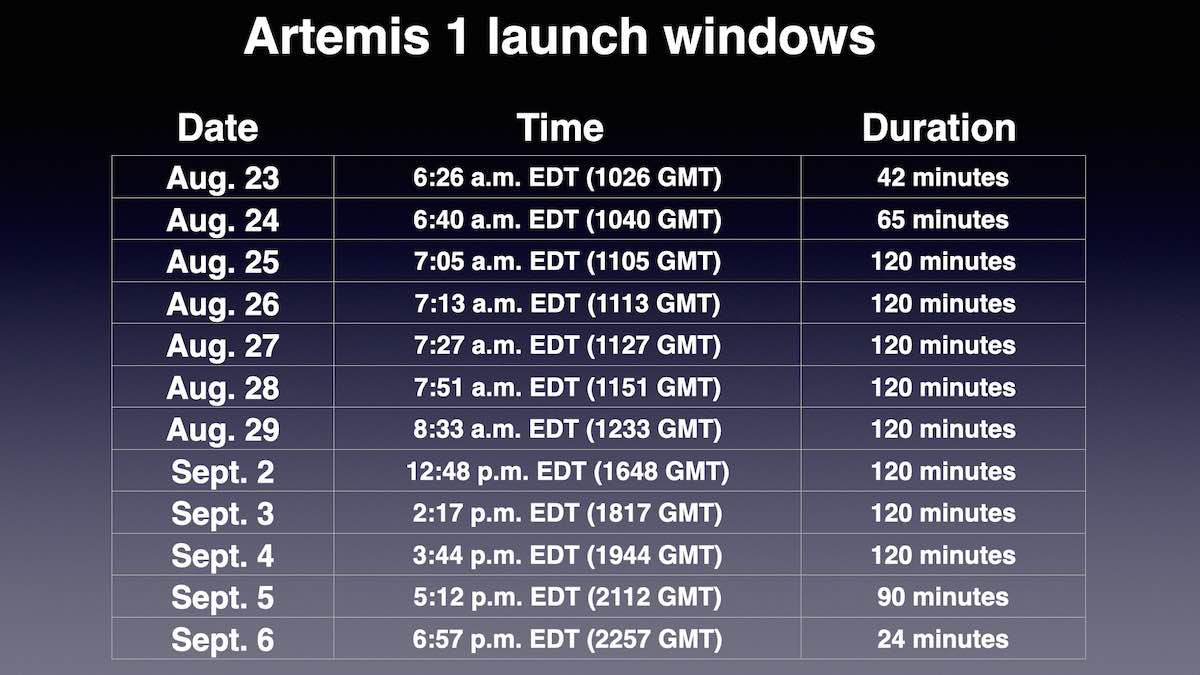 Whenever it flies, the initial SLS “block 1” rocket will be the most powerful ever built for NASA, generating a record 8.8 million pounds of thrust at liftoff using four shuttle-heritage RS-25 main engines and two five-segment solid-fuel boosters.

NASA managers had hoped to launch the rocket earlier this summer, but engineers ran into a series of mostly ground-system problems during four dress-rehearsal countdowns and fueling tests.

During the most recent practice run on June 20, the launch team finally filled the rockets tanks with a full load of 750,000 gallons of supercold liquid oxygen and hydrogen fuel. But sensors detected a hydrogen leak in a 4-inch quick-disconnect fitting used to route cold propellant to the main engines for pre-start cooling.

During an actual launch count, the leaky fitting would have triggered a scrub. But given the engines were never going to be fired in the practice run, no hydrogen was allowed to flow through the line and the countdown ticked all the way to T-minus 29 seconds when the rocket’s flight computer, noting the lack of engine cooling, called a halt as expected.

Three previous fueling tests were cut short by a variety of problems, including leaks in a different hydrogen feed line connector. In all three cases, the countdown was cut off well before fuel loading was complete and long before its “terminal” phase, the last 10 minutes, could begin.

After the mostly successful fueling test June 20, the SLS was hauled off the pad and back to the Vehicle Assembly Building on July 2. Since then, engineers have been working to fix the hydrogen vent line fitting and carry out other pre-launch preparations to clear the way for flight.