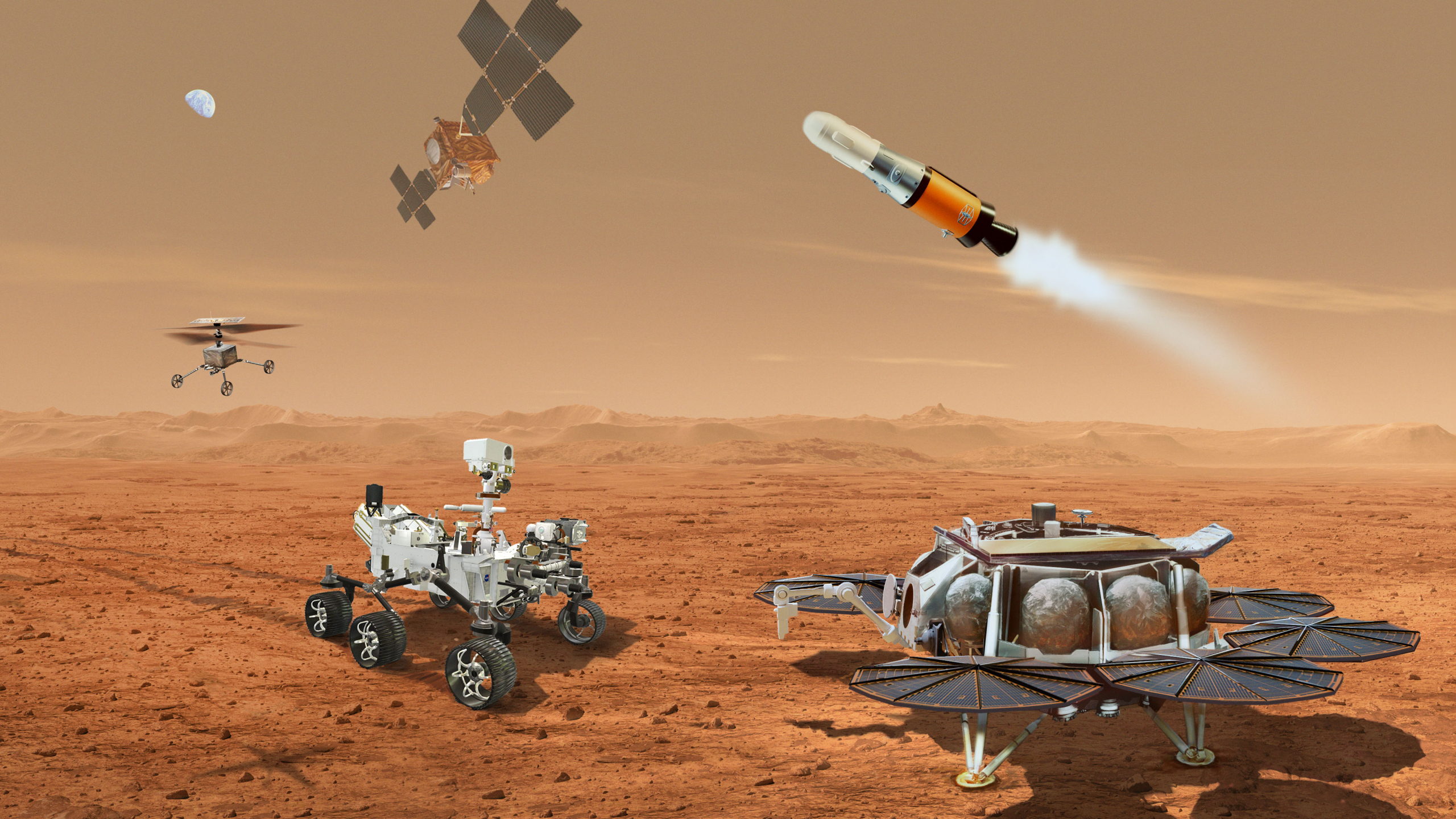 On July 27, NASA and the European Space Agency (ESA) unveiled new advanced mission architecture for the upcoming Mars Sample Return mission. Additionally, NASA completed its system requirements review for the mission, bringing the ambitious project one step closer to the completion of its conceptual design phase.

The new mission architecture takes advantage of new technology that has been developed and tested on Mars, such as flying rotorcraft similar to the Mars 2020 mission’s Ingenuity Mars helicopter.

The primary goal of the Mars Sample Return mission, as can be inferred from the name, is to efficiently return several samples of the Martian surface to Earth using a combination of rovers, landers, rockets, and now rotorcraft. Mars Sample Return began with the landing of NASA’s Mars 2020 Perseverance rover in Jezero Crater in February 2021, where it has been frequently collecting samples throughout its various expeditions in the crater.

With such a lofty goal for a mission, it’s easy to see how the sample return architecture can be extremely complex. Reducing the complexity of the Mars Sample Return mission and increasing the probability of success was the main focus of the updated mission architecture announced by NASA and ESA.

After collecting the samples, the rover would then return to the Sample Retrieval Lander, where the samples would be loaded into a capsule inside the Mars Ascent Vehicle and launched into orbit. Once in orbit, the Mars Ascent Vehicle would rendezvous with the Earth Return Orbiter and hand off the samples to the orbiter, which would then return to Earth and release them into Earth’s atmosphere for retrieval and analysis by NASA and ESA scientists. 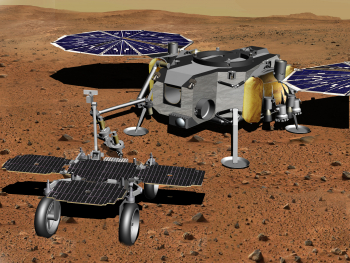 Graphic showing the Sample Fetch Rover transferring samples to the lander. This fetch rover is no longer used in the advanced mission architecture. (Credit: NASA/JPL-Caltech)

But now, the new mission architecture outlined on July 27th calls for NASA and ESA to forgo the use of the Sample Retrieval Rover and instead primarily utilize both the Perseverance rover and two secondary “sample recovery helicopters” to pick up the samples dropped by Perseverance throughout Jezero Crater.

The Sample Retrieval Lander will carry the two helicopters along with the Mars Ascent Vehicle and is now planned to be the only remaining part of the Mars Sample Return mission that will land on the Martian surface. Perseverance will collect most of the samples with the helicopters likely assisting the rover with collecting samples that are large distances from the lander.

The design of the helicopters will be largely based on the design of the Ingenuity helicopter that is currently operating in Jezero alongside Perseverance. Ingenuity has far surpassed all expectations set by NASA teams, and has completed an astonishing 29 flights on the Red Planet and survived over a year beyond its original expected lifetime. The efficiency and capabilities demonstrated by Ingenuity were a driving force behind the decision to use helicopters to assist Perseverance with retrieving the surface samples.

“There are some significant and advantageous changes to the plan, which can be directly attributed to Perseverance’s recent successes at Jezero and the amazing performance of our Mars helicopter,” said Dr. Thomas Zurbuchen, NASA’s associate administrator for science.

What’s more, the updated Mars Sample Return renders released on the 27th show the helicopters, which appear to have small wheels located on the ends of their four landing legs. These wheels will presumably be used to move the helicopters closer to the samples they are trying to retrieve, as landing precisely beside them will be a task that’ll be extremely difficult for the helicopters to achieve.

In the updated plan to return Mars samples to Earth, the @NASAPersevere rover will bring samples to a lander, where a robotic arm provided by @ESA will load them into an ascent vehicle. Two Ingenuity-class helicopters will act as back-ups. Details: https://t.co/1rQJ8H7D1L pic.twitter.com/HMTd7T5aWC

Furthermore, the Earth Return Orbiter, which is under development by ESA, will remain a vital part of the mission and is planned to return the samples to Earth in 2033.

The unveiling of this advanced mission architecture has pushed Mars Sample Return one step closer to the completion of its conceptual design phase, during which mission teams evaluated and refined various components to determine the best possible design.

“The conceptual design phase is when every facet of a mission plan gets put under a microscope,” said Dr. Zurbuchen.

The next phase of the mission’s development is the preliminary design phase, which is expected to last approximately 12 months. During this phase, mission teams will complete technology development and create prototypes of major mission components.

Before being publicly unveiled, NASA and ESA previewed the updated mission architecture to mission and agency partners in May. These agency/mission partners will meet again in September, where they will discuss the discontinuation of the development of the Sample Retrieval Rover, which is no longer planned to be used in the advanced mission architecture.

“Working together on historic endeavors like Mars Sample Return not only provides invaluable data about our place in the universe but brings us closer together right here on Earth,” said Dr. Zurbuchen.

To this, Mars Sample Return, assuming all goes according to plan, will be one of the most influential science missions ever performed.

NASA, ESA, the China National Space Administration (CNSA), and many other agencies and governments have been exploring Mars for decades; however, each mission sent to the Red Planet can only carry a certain amount of instruments with it. Due to this, what lies on the Martian surface is not entirely known as scientists have only been able to use the instruments available on Mars to analyze surface samples collected by various missions.

Under Mars Sample Return, samples of Martian rock, regolith, atmosphere, and more will be returned to Earth, where scientists can properly analyze every bit of each sample in labs using sophisticated instruments that have never been used to analyze a Martian sample before. Having the capability to intensely study these Martian samples will allow scientists to test new theories and models as they are developed by research teams, similar to how samples collected by the Apollo missions have been used to develop and test theories about the Moon.

Completing the Mars Sample Return mission will fulfill a major goal set by solar system exploration programs across the world as well as the last three Planetary Science Decadal Surveys, and complete a mission that has been of a high priority since Mars exploration began in the late 60s.

Mars Sample Return is currently targeting launches in fall 2027 and summer 2028, respectively, with the samples returning to Earth in 2033.