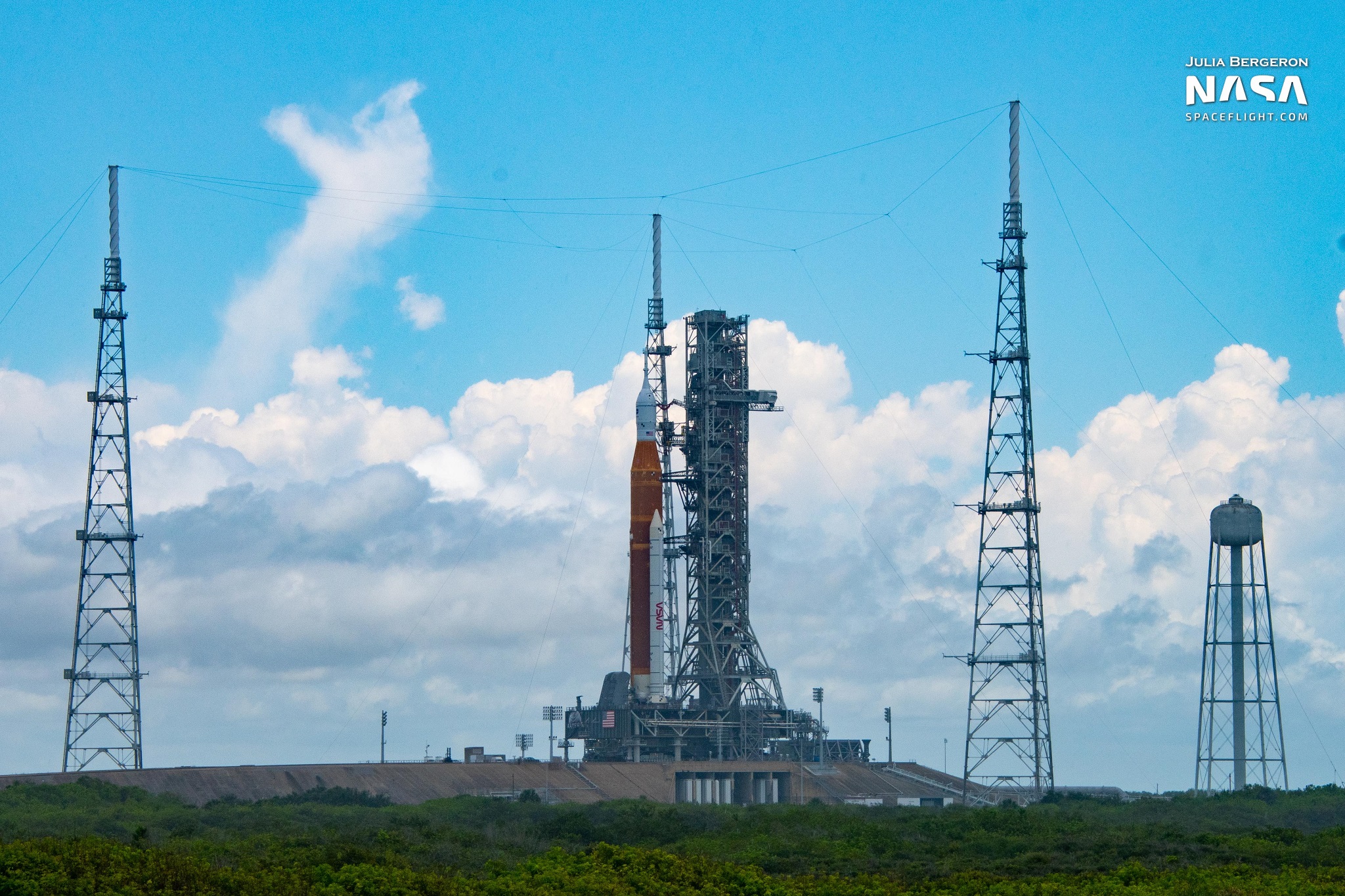 NASA got within several seconds of completing its practice launch day exercise June 20 with the Artemis 1 vehicle on the launch pad at the Kennedy Space Center (KSC) in Florida. The fourth Wet Dress Rehearsal (WDR) test attempt got down to T-29 seconds in a single, consolidated run of the countdown’s final ten minutes with the integrated Orion spacecraft and Space Launch System (SLS) rocket for Artemis 1 fully fueled and pressurized like it will be for launch.

A different set of gaseous nitrogen supply and hydrogen leak issues pushed the final countdown to the end of a long day for launch team members with the agency’s Exploration Ground Systems (EGS) program and prime launch processing contractor Jacobs, but they were able to fully fuel the two cryogenic stages on the SLS launch vehicle with liquid oxygen (LOX) and liquid hydrogen (LH2) and count down to the final handover of countdown control to the SLS flight computers.

If enough test objectives were completed to NASA’s satisfaction, the agency may soon have the data it needs to finally set an official launch date; currently, late August is the earliest that Artemis 1 could lift off.

The countdown timeline was again aligned to the same time of day as the first three attempts. For June 20, the simulated launch day for this attempt, the Mission Management Team (MMT) held their pre-tanking briefing early in the morning with a targeted, initial T-0 of 2:40 pm Eastern (18:40 UTC). 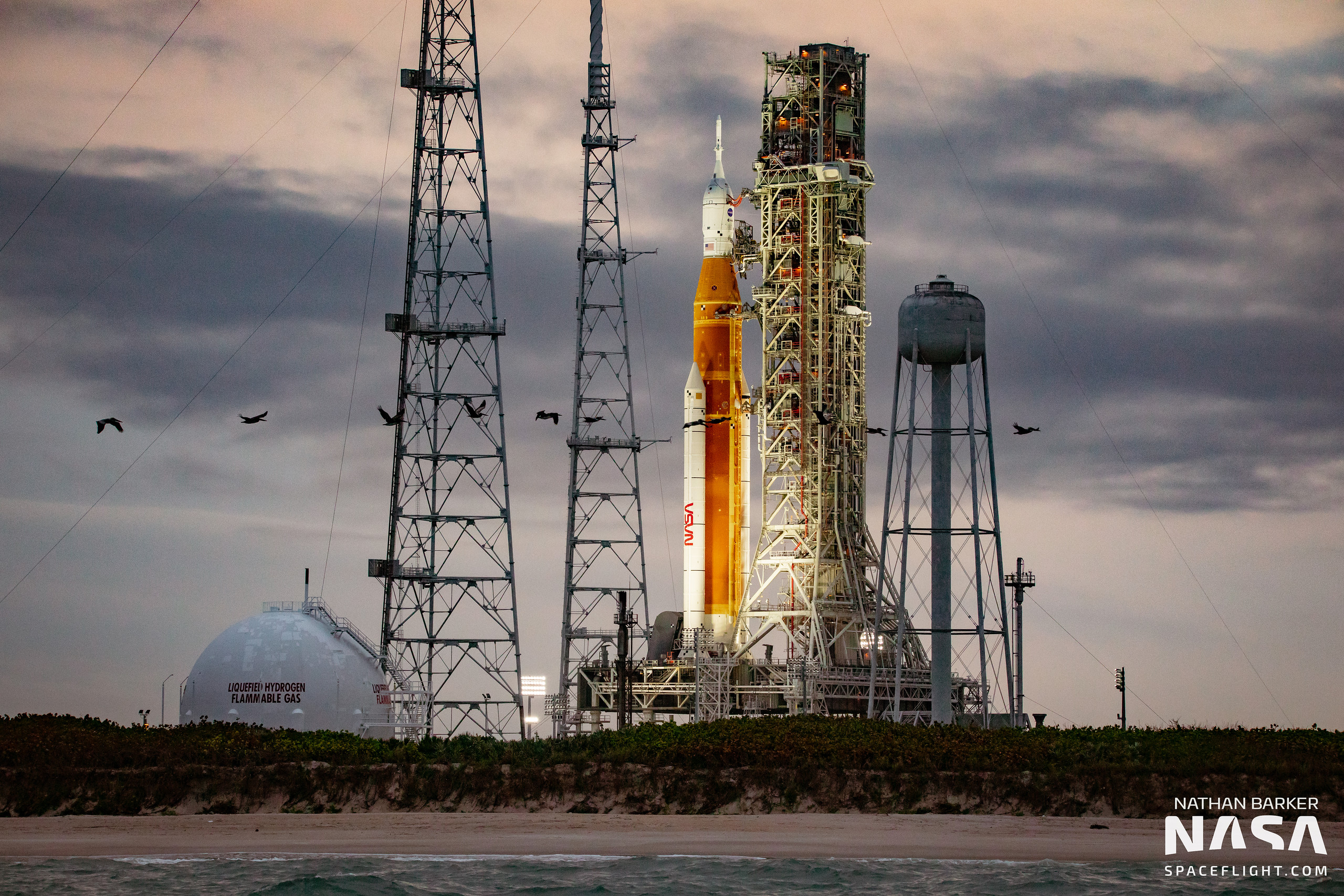 SLS on LC-39B for its wet dress rehearsal with the pad’s original 850,000 gallon liquid hydrogen storage sphere to the left. (Credit: Nathan Barker for NSF)

The fourth attempt to complete this comprehensive test of vehicle and ground system countdown choreography comes after the vehicle was rolled out from KSC’s Vehicle Assembly Building (VAB) to Launch Pad 39B for a second time on June 6. Once the vehicle on its Mobile Launcher was lowered onto the pedestals at the pad by Crawler Transporter 2, a milestone also called “hard down,” ground teams began about two weeks of work to prepare for the WDR, which is the final, major, planned pre-launch test.

“Once we got hard down at the pad, we began what we call our pad validation and essentially what that does is it confirms our services and our connectivity between the pad and the ML and then back to the LCC, the Launch Control Center and our command-and-control system,” Artemis 1 Launch Director Charlie Blackwell-Thompson, said in a June 15 media teleconference. “That runs across several days and we finished up those validations and then the next big milestone for us was getting ready for the booster servicing.”

“We performed that over this last weekend and so at this time we do have the hypergolic fuel load complete for the [Solid Rocket Booster (SRB)] hydraulic power units (HPU) that provides the booster thrust vector control (TVC) during flight and we do intend to test that system inside of the 30 second mark of our Wet Dress Rehearsal [countdown].” With pad validations and SRB hydraulic system servicing complete, teams in the Launch Control Center adjacent to the VAB and out at the launch pad with the vehicle began countdown preparations for the WDR. 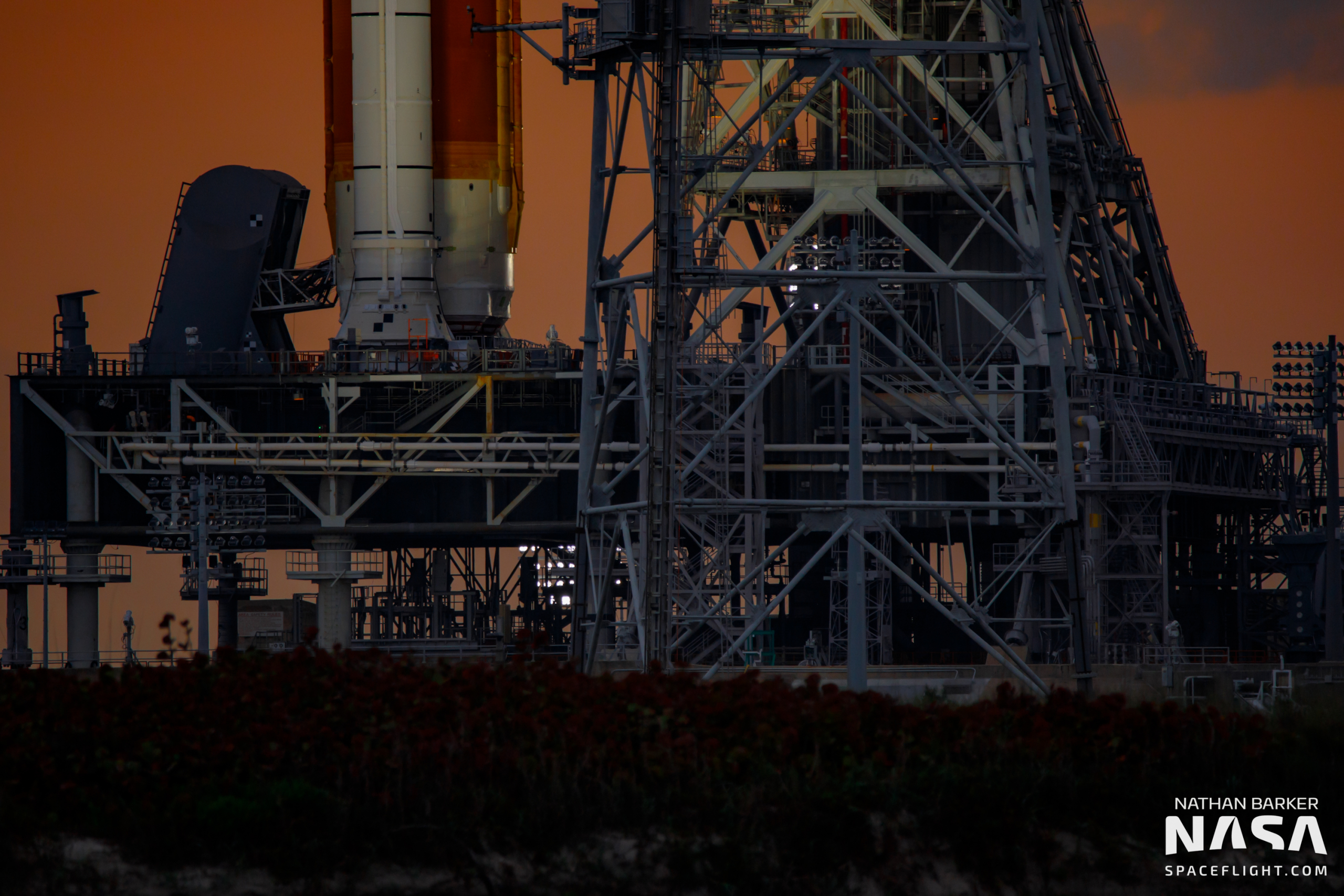 The Tail Service Masts which will fuel the Core Stage will LH2 and liquid oxygen. Seen here, the LH2 mast is visible with th e LOX mast perfectly hidden behind it. Both commodity TSMs connect to the same side of the Core State. (Credit: Nathan Barker for NSF L2)

Call to stations for the test occurred at 5 pm Eastern (21:00 UTC) on June 18, with the countdown clock starting 30 minutes later at T-43 hours, 10 minutes, and counting. Plans called for the clock to continue down to a 90-minute long hold at T-6 hours and 40 minutes for the pre-tanking decision point in the process.

The hold began at 6 am Eastern (10:00 UTC) on June 20, concurrent with the MMT pre-tanking briefing. The MMT gave a “go” to tank the vehicle, but the start of propellant loading was delayed for almost two hours by a disruption in the backup gaseous nitrogen purge supply from a KSC facility.

The Artemis 1 Orion/SLS Block 1 Crew vehicle was originally rolled to Pad 39B in mid-March to complete a set of engineering tests followed by the WDR. A series of issues, some of which repeated themselves persistently, stopped the first three attempts in early and mid-April.

The first attempt on April 3 was scrubbed before the fueling process began when supply fans located inside the Pad 39B area away from the Mobile Launcher stopped working. The second attempt was made the next day on the morning of April 4, but fueling was delayed for hours when the gaseous nitrogen (GN2) purge flow died.

A high-flow rate of GN2 needed for SLS is drawn from the space center nitrogen gas supplier Air Liquide; after the plant was able to re-establish the flow of gas to inert areas inside the rocket, the launch team was able to begin loading liquid oxygen into the Core Stage after a false start or two. 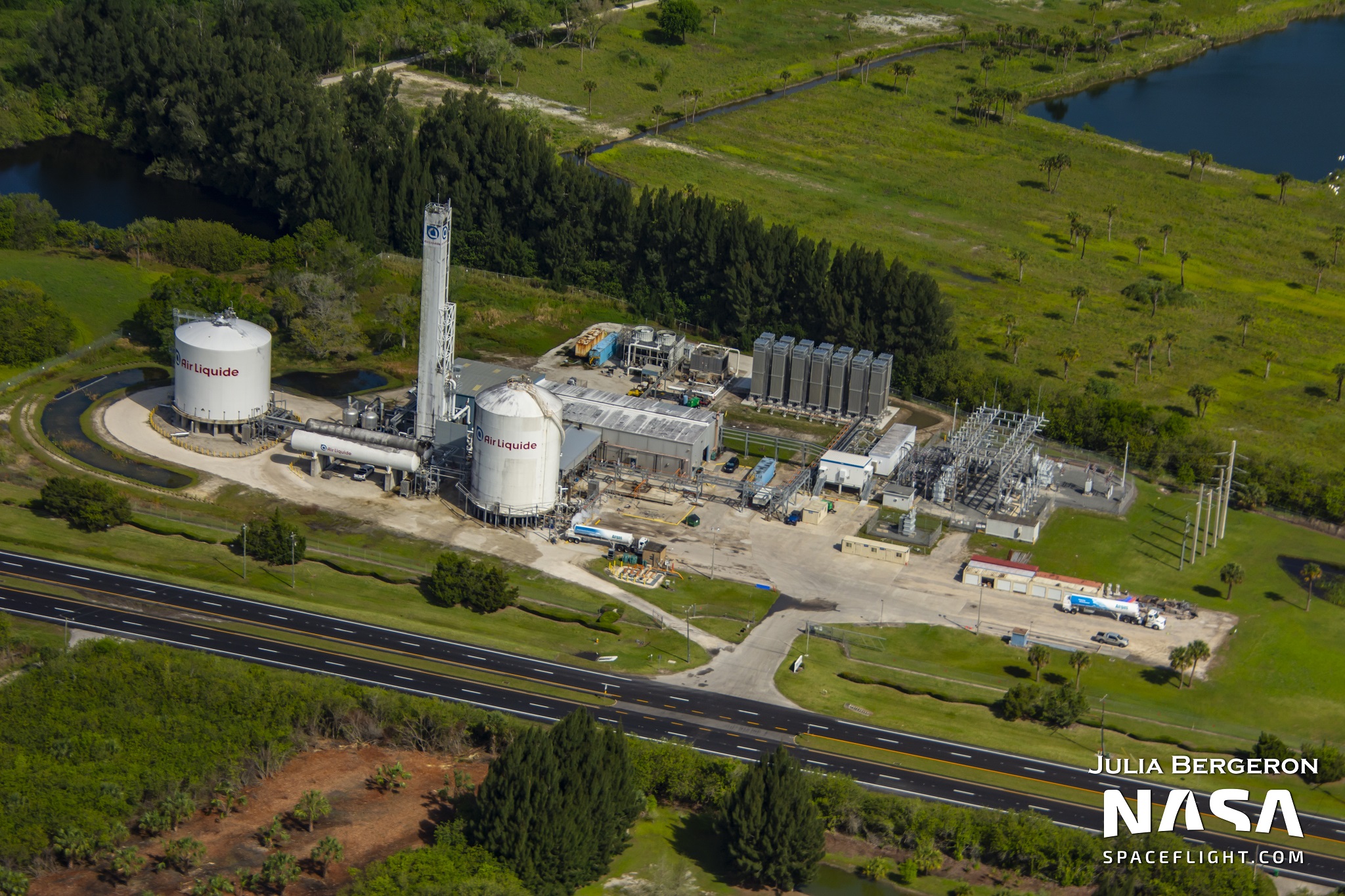 The April 4 attempt was scrubbed when the team began preparations to begin loading liquid hydrogen into the vehicle and it was discovered that a panel on the Mobile Launcher was not in a configuration that could support loading.

After standing down for a couple of days of rest, the third attempt was postponed when a gaseous helium check valve on the Interim Cryogenic Propulsion Stage (ICPS) used to fill pressure vessels on the SLS second stage stopped working. Following some maintenance of launch pad helium systems, the valve would no longer fully close to keep the helium in the stage’s pressure vessels.

NASA decided to make the third attempt on April 14 without loading the ICPS with propellant or performing final launch preparations on the stage during terminal countdown. The GN2 supply again crashed during the third attempt, delaying the beginning of propellant loading, but the launch team was able to load LOX on the Core Stage and had started loading LH2 for the first time when a leak was detected in the hydrogen tail service mast umbilical (TSMU).

The concentration of hydrogen gas around the umbilical lines spiked over the allowable 4% limit when LH2 loading transitioned from slow fill to fast fill. As a result, the hazardous gas violation automatically stopped the loading process, and it was decided to scrub the attempt.

Following the scrub, the GN2 purge gas supply crashed for a second time on April 14 while the Core Stage was being drained. The second loss of purge flow was longer and more serious than the first. Following an assessment of the situation, NASA decided to roll back to VAB in late April to allow repairs and servicing to be performed on the rocket and launcher in parallel with repairs and upgrades necessary for Air Liquide to support future SLS tankings.

Repair work and validation testing was mostly completed in May, leading to the second rollout to Pad 39B on June 6. 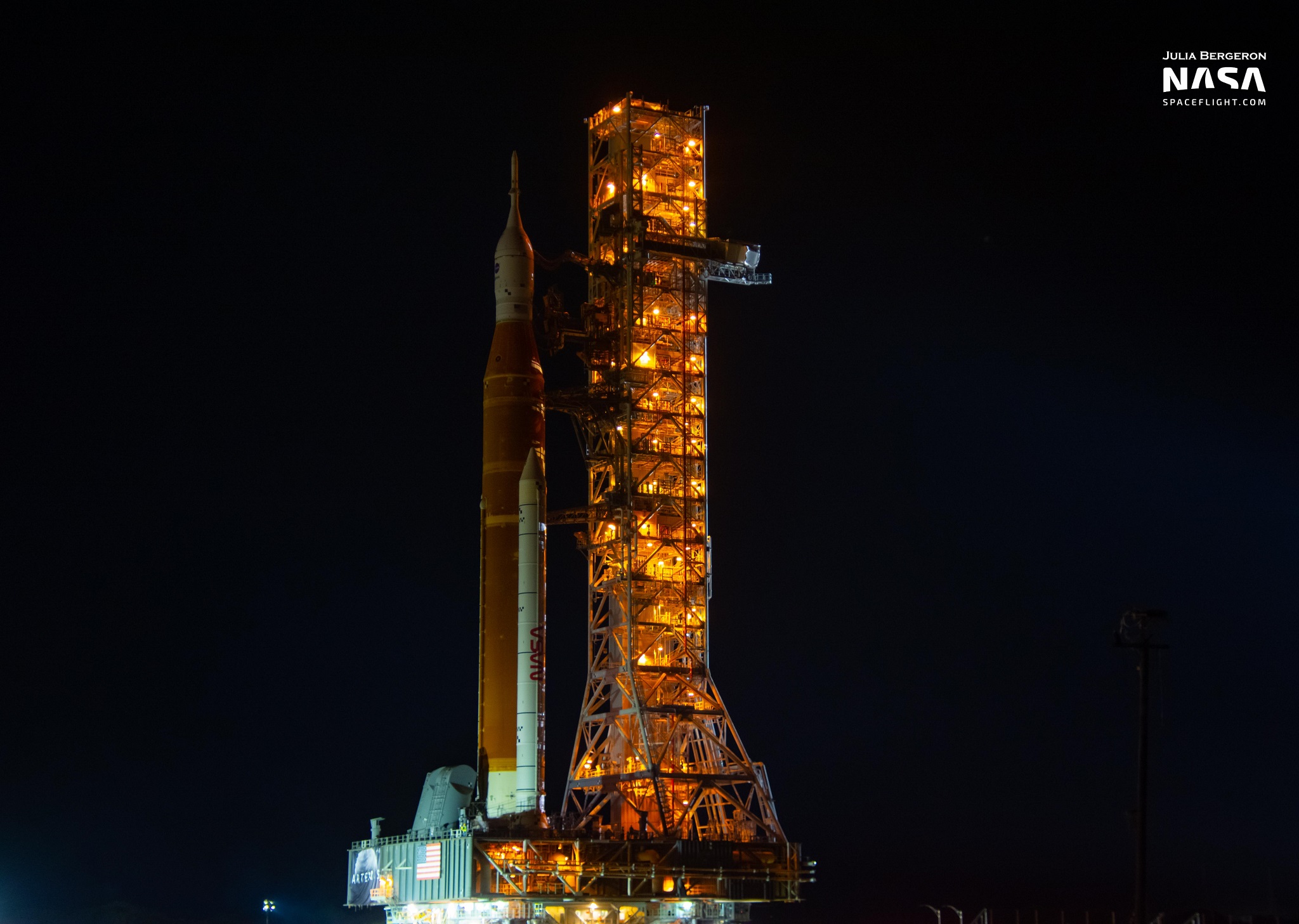 NASA plans to complete the WDR test while the vehicle is out at the pad, including plans to possibly conduct a quick scrub turnaround exercise in preparation for another tanking by the end of the week. Once the agency is satisfied with the outcome of the test, the vehicle and Mobile Launcher will be prepared to roll back to the VAB where final pre-launch servicing and installations would be conducted before returning to the pad for launch.

If the test goes well on June 20, one option would be to prepare the vehicle to roll back to the VAB as early as June 27, but that may depend on whether the scrub turnaround exercise is conducted and how long it lasts.  In the meantime, NASA is not planning on officially targeting a launch date until after they can review results from a complete test.

Depending on how cleanly the vehicle and ground systems come through the test, it may be possible for NASA to be ready to launch Artemis 1 by the end of the Summer, no earlier than a launch opportunity that opens in late August and runs through early September.