A Chandra X-ray Observatory view of the supermassive black hole at the heart of quasar H1821+643. Courtesy NASA/CXC/Univ. of Cambridge/J. Sisk-Reynés et al.

Black holes. They used to be theoretical, up until the first one was found and confirmed back in the late 20th Century. Now, astronomers find them all over the place. We even have direct radio images of two black holes: one in M87 and Sagittarius A* in the center of our galaxy. So, what do we know about them? A lot. But, there’s more to find out. A team of astronomers using Chandra X-ray Observatory data has made a startling discovery about a central supermassive black hole in a quasar embedded in a distant galaxy cluster. What they found provides clues to the origin and evolution of supermassive black holes.

If you’re going to study a black hole, particularly a supermassive one, there are a lot of challenges. It turns out every large galaxy has a central monster black hole. So, it’s important to know as much as we can about them. These cosmic behemoths contain millions or even billions of solar masses. They have strong gravitational pulls—and nothing, not even light, can escape their clutches. That affects our ability to look at them and their nearby regions.

One thing that isn’t quite clear yet: how do these monsters form and evolve? The answer lies partially in two of their characteristics. “Every black hole can be defined by just two numbers: its spin and its mass,” said Julia Sisk-Reynes {Institute of Astronomy (IoA), the University of Cambridge in the U.K), who led a new study of a supermassive black hole some 3.6 billion years away from us. “While that sounds fairly simple, figuring those values out for most black holes has proved to be incredibly difficult.”

Measuring the masses is difficult, although there are ways to do it. Measuring spin is a real challenge. To learn more about monster black holes, Sisk-Reynes and collaborators used Chandra X-ray Observatory data. They studied observations of the central supermassive black hole engine of the quasar H1821+643 and possibly get its spin rate. It contains 30 billion times the mass of the Sun. (By comparison, the Milky Way’s central supermassive black hole has only about four billion solar masses.)

Why X-rays? A spinning black hole drags space around with it and allows matter to orbit closer to it than is possible for a non-spinning one. X-ray data shows how fast the black hole spins. Studies of the spectrum of H1821+643 show that its black hole rotation rate is weird, compared to other less massive ones that spin at close to the speed of light. That slower rate for the quasar’s black hole surprised the team. 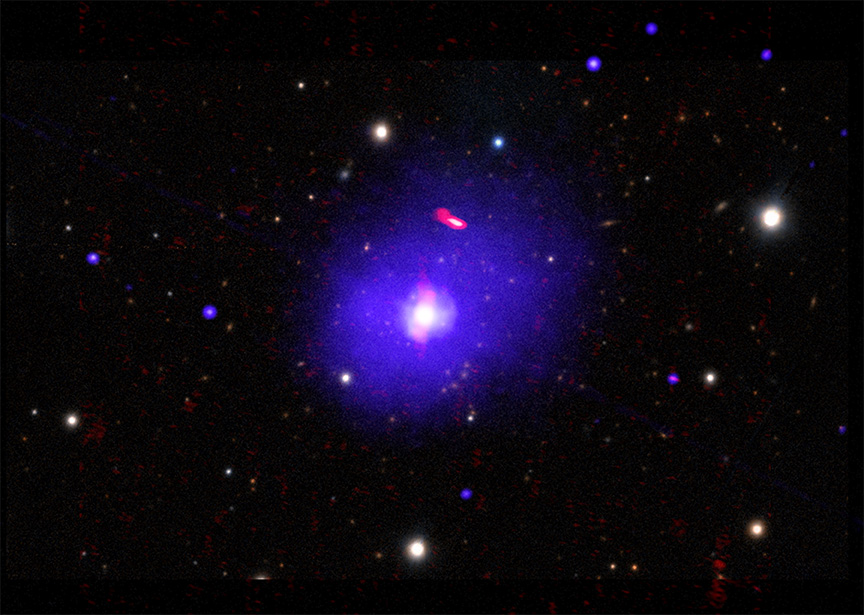 This composite image of H1821+643 contains X-rays from Chandra (blue) that have been combined with radio data from NSF’s Karl G. Jansky Very Large Array (red) and an optical image from the PanSTARRS telescope on Hawai’i (white and yellow). The researchers used nearly a week’s worth of Chandra observing time, taken over two decades ago, to obtain this latest result. The supermassive black hole is located in the bright dot in the center of the radio and X-ray emission.

“We found that the black hole in H1821+643 is spinning about half as quickly as most black holes weighing between about a million and ten million suns,” said astronomer Christopher Reynolds (also of the Institute of Astronomy). He is co-author of the paper reporting the results of the Chandra measurements. “The million-dollar question is: why?”

The history of H1821+643 could hold the key to understanding its slower spin rate, according to co-author James Matthews (also at the Institute of Astronomy). He suggests that supermassive black holes like the one in H1821+643 likely grew through mergers with other black holes during collisions of their galaxies. It’s well known that galaxy collisions build up larger galaxies over time, and so those same activities (including collisions of dwarf galaxies) are fair game as possible factors.

It’s also possible that this black hole had its outer disk disrupted in a collision, which sent gas out in random directions during the event. These kinds of activities would affect the spin rate of the black hole—slowing it down, or even torquing it around in an entirely new direction. That means such black holes could show a range of spin rates, depending on their recent histories.

“The moderate spin for this ultramassive object may be a testament to the violent, chaotic history of the universe’s biggest black holes,” Matthews said. “It may also give insights into what will happen to our galaxy’s supermassive black hole billions of years in the future when the Milky Way collides with Andromeda and other galaxies.”

The post Most Black Holes Spin Rapidly. This one… Doesn’t appeared first on newsastronomy.com.