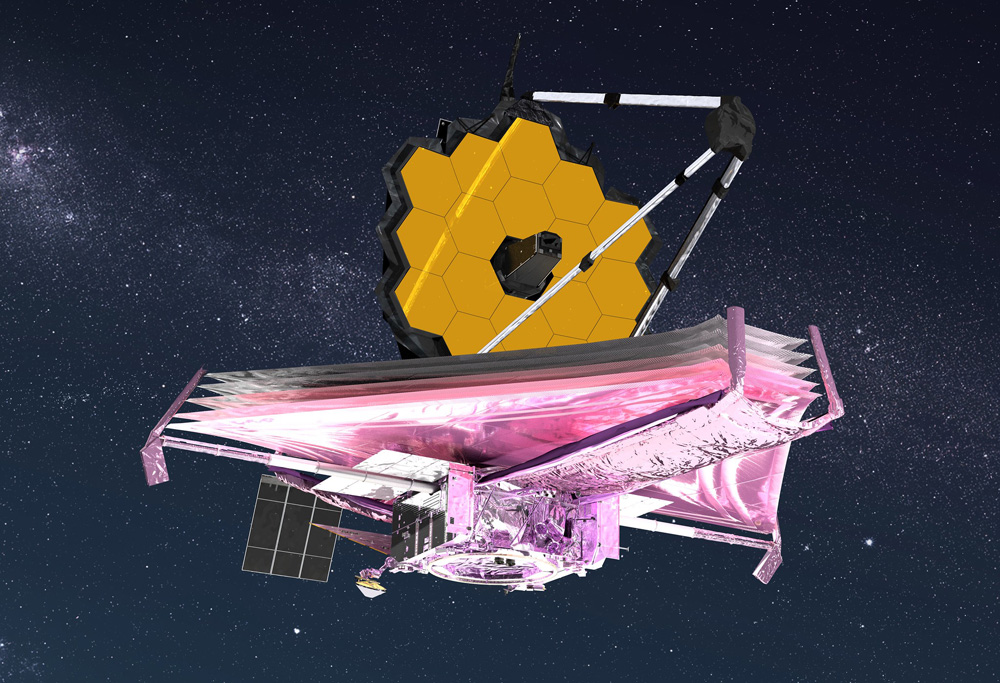 An artist’s impression of the James Webb Space Telescope with its five-layer sunshade and primary mirror fully deployed after launch atop an Ariane 5 rocket. Image: NASA

A micrometeoroid dinged one of the James Webb Space Telescope’s 18 primary mirror segments last month, the fifth such impact since the observatory’s Christmas Day launch, causing a “marginally detectable” effect on its performance, NASA revealed on 8 June.

After a detailed analysis of the fifth and largest impact, the segment’s orientation was adjusted to counteract the degradation, but some reduction in data quality remains.

Even so, NASA said in a blog post, “the team found the telescope is still performing at a level that exceeds all mission requirements.”

NASA had not revealed any of the impacts before the blog post and the announcement 8 June caught many observers by surprise, especially given how smoothly Webb’s post-launch checkout and calibration have been proceeding.

NASA plans to unveil the first colour images from the observatory on 12 July and while it’s not yet clear what “marginally detectable” degradation means in terms imagery and spectra, the initial photos are expected to fully showcase Webb’s ability to meet the mission’s science objectives.

The James Webb Space Telescope is the most powerful ever launched, equipped with a segmented 6.5-metre (21.3-foot) primary mirror capable of detecting the stretched-out infrared emissions from the first generation of stars and galaxies to light up in the wake of the Big Bang.

The beryllium primary is made up of 18 hexagonal segments coated with a thin layer of gold to maximise reflectivity. They are among the most perfectly fashioned optical elements ever made. Each segment is equipped with actuators that allow engineers to make ultra-precise adjustments to fine tune their orientation and the alignment of the reflected starlight.

Given Webb’s open architecture, without the protection of a traditional tube and with its mirrors exposed to the space environment, engineers always expected the telescope to get hit from time to time by high-speed dust-size particles whizzing about the inner solar system. With Webb’s extremely precise optical alignment, such impacts were expected to be relatively easy to detect.

Extensive pre-launch testing was carried out to ensure Webb’s gold-coated primary and secondary mirrors could withstand such impacts without suffering significant damage. But the impact last month, which occurred between 23 and 25 May, was larger than the models led engineers to expect.

“Since launch, we have had four smaller measurable micrometeoroid strikes that were consistent with expectations and this one more recently that is larger than our degradation predictions assumed,” said Lee Feinberg, Webb optical telescope element manager at NASA’s Goddard Space Flight Center in Baltimore.

“We will use this flight data to update our analysis of performance over time and also develop operational approaches to assure we maximise the imaging performance of Webb to the best extent possible for many years to come.”