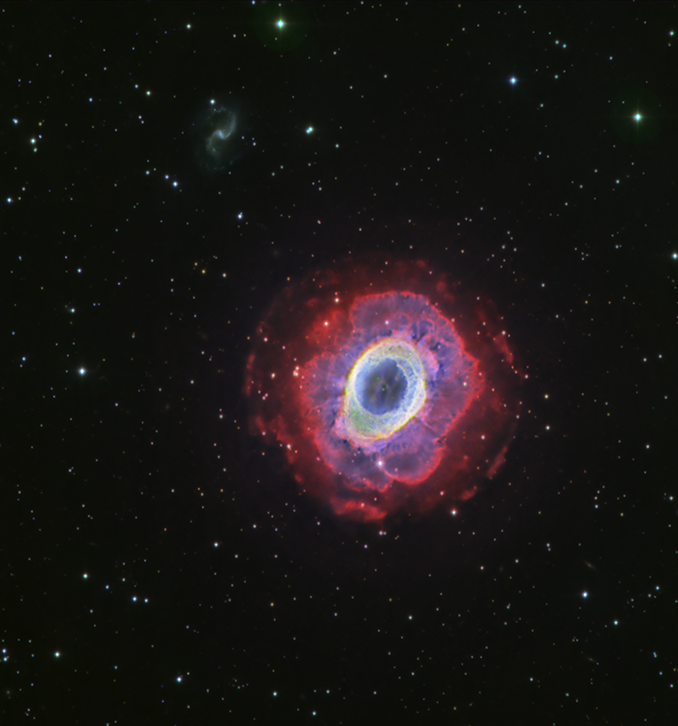 Messier 57 is the famous Ring Nebula in Lyra, a showpiece planetary nebula that’s arguably the finest and most observed in its class. A measure of its popularity is the ease in which it can be located, lying roughly midway between third-magnitude Sheliak and Sulafat (beta [β] and gamma [γ] Lyrae), but once you land on the Ring it offers the startling sight of a celestial ‘smoke ring’, through even a small telescope. M57 also affords observers an advantageous high surface brightness that’s ideal to punch through early summer’s twilight-infested night-time. 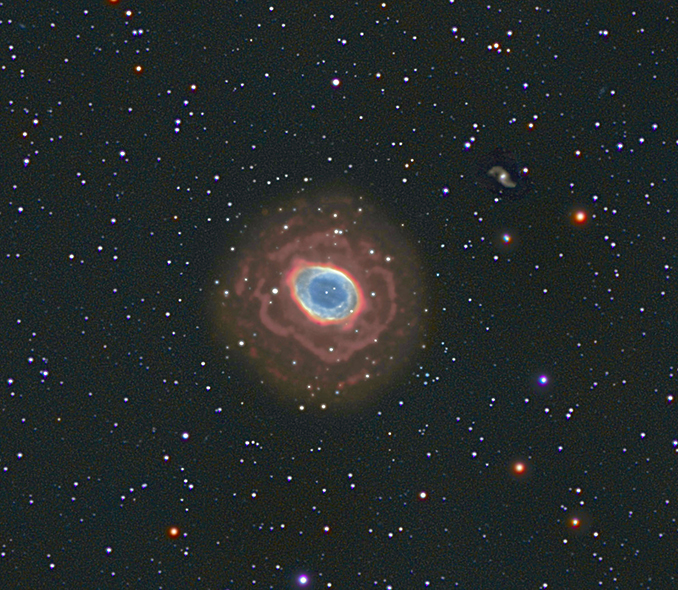 The constellation Lyra rides high on mid-summer evenings, led by blazing Vega, which, at a glorious magnitude +0.03, is the fifth-brightest star in the entire sky. By 11pm BST at around mid-month from the south of England, what passes for darkness at this time of the year has fallen and Vega already sits over 70 degrees clear of the south-south-eastern horizon. The aforementioned Sheliak and Sulafat lie around six to seven degrees south-east of Vega. 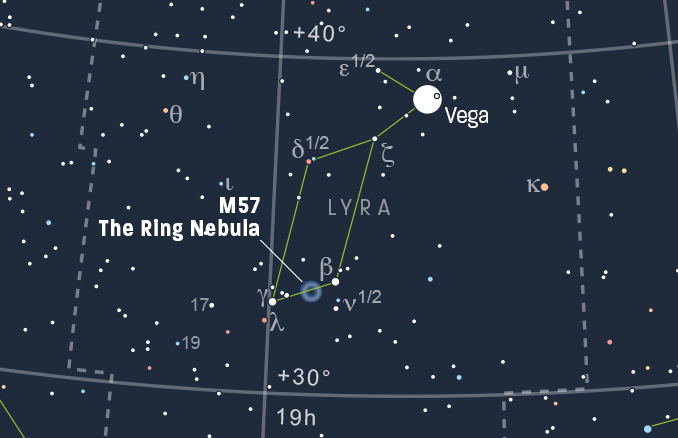 Messier 57 is very easy to find, located between third-magnitude Sheliak and Sulafat (beta [β] and gamma [γ] Lyrae).Sweeping the area with a pair of 10 × 50 binoculars should reap a reward, as the Ring is bright enough (magnitude +8.8) to be detected, though, perhaps surprisingly and definitely disappointingly for beginners it’s marginally too small (60” × 80”) to be readily distinguished from a star at such low magnification. However, it takes only a small telescope (say a 70–80mm [~three-inch] refractor) with a magnification of around 30× to show the Ring’s rather oval or elliptical shape. The rather neat technique of averted vision (using peripheral vision by looking slightly to one side of the target) comes in very handy when observing through the smallest telescopes, making the Ring almost miraculously pop into view.

Upgrading to a 100mm (four-inch) telescope and increasing the power to say 100×intensifies the Ring’s elliptical shape and can reveal some brightness variations in an otherwise evenly illuminated disc. The addition of an O-III filter is highly recommended on a night of steady seeing to try to eke out more of the Ring’s subtle structure. Most observers see the Ring as merely grey-white.

If you want to see M57’s central star, the white dwarf remnant, then you’ll need at least a 400–500mm (16- to 20-inch) aperture operating under a very dark and transparent sky. It might be better to wait until August for the return of darker skies. It is clearly seen in amateur images. The star has a temperature of about 150,000 degrees, a mass 1.2 times that of the Sun and a  luminosity 500 times greater than that of our star, with most of that at ultraviolet wavelengths.

A more traditional view of the ‘Ring’. Image: Jim Misti.