News Astronomy > News > Lunar Rocks Have Earth’s Noble Gases Trapped Inside. More Evidence That the Moon Came From the Earth

Piecing together the history of the Solar System from the traces left behind isn’t easy. Bit by bit, however, we’re working it out. This month, new research examining the composition of lunar meteorites offers compelling evidence that the Moon and the Earth were formed from the same material, perhaps in the aftermath of a cataclysmic collision some 4.5 billion years ago.

The so-called Giant Impact theory, in which a Mars-sized planet crashed into the proto-Earth creating the Earth and Moon from the debris, has been a leading evolutionary model for the Earth-Moon system ever since the Apollo program helped scientists get their hands on Moon rocks in the late 1960s. Analysis of the Moon rocks showed striking similarities in the geology of both bodies (specifically, identical stable isotope ratios in the rocks of both worlds), suggesting a common origin for both. But proving it conclusively isn’t easy, and, perhaps more importantly, describing the exact nature of the impact and the post-collision timeline is a real challenge.

Patrizia Will of the Institute of Geochemistry and Petrology at ETH Zürich has been working on this very big problem by studying very small samples of lunar meteorites.

Collected in Antarctica (where meteorites are relatively easy to find, standing out from the icy surroundings), the basalt rock meteorites began life as molten magma within the Moon’s subsurface. It cooled and solidified, before being protected by a second layer of rock on top of it, isolating it from solar winds and radiation. A high-energy event (like a meteor strike) blasted the rock off the Moon, sending it flying towards Antarctica, where it was finally found.

Will examined six samples of lunar meteorites and found that microscopic bits of glass within the meteorites contained noble gases like Neon and Helium, consistent with those found in the Earth’s mantle. These gases are also found in the solar wind, but these samples, originating beneath the Moon’s surface, were not exposed to the solar wind, meaning the gas had to have come from a different source. Using a powerful mass spectrometer, Will was able to rule out the solar wind and exogenous contamination: the noble gas is likely, therefore, to have been terrestrial in origin. 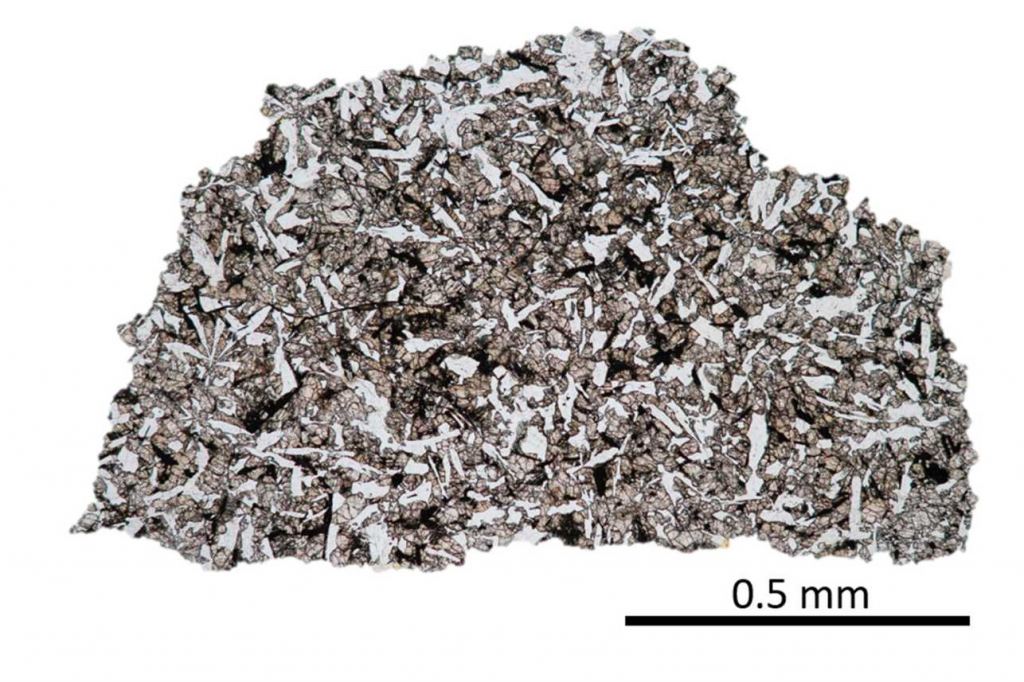 “Finding solar gases, for the first time, in basaltic materials from the Moon that are unrelated to any exposure on the lunar surface was such an exciting result,” Will said.

This new evidence not only gives further credence to the giant impact theory, but also helps constrain the nature of that impact.

Early models suggested that the giant impact was a moderately slow collision. But recent models offer other options that could produce the same result, including a high energy impact with a fast spinning proto-Earth, which would produce a molten disc of debris and vaporized material, from which the Moon condensed.

Will and her co-authors propose two scenarios for how the noble gases became trapped in the Lunar interior. The first is that after the Moon formed, it took a few million years for the magma oceans of the young world to cool and solidify. This scenario offers plenty of time for impactors to deliver material to the lunar mantle and mix throughout it. In the second scenario, the Moon accreted from a debris field surrounding Earth – made up of the Earth’s mantle – enabling the noble gases to be present directly in the Moon’s formation just as they were in Earth’s.

The Giant-Impact theory is now about as close as we can get to being verified. The evidence for it is compelling, in Will’s study and in others. But there is still more to learn. Efforts to narrow down the exact nature of that primordial collision are ongoing, and studying the presence of even heavier noble gases like xenon and krypton (which are harder to identify) in Lunar meteorites may play a role in the future.

The post Lunar Rocks Have Earth's Noble Gases Trapped Inside. More Evidence That the Moon Came From the Earth appeared first on newsastronomy.com.