Live coverage of the countdown and launch of a SpaceX Falcon 9 rocket from Space Launch Complex 40 at Cape Canaveral Space Force Station in Florida with the Korea Lunar Pathfinder Orbiter mission. Follow us on Twitter.

South Korea’s first mission to the moon is ready for launch at 7:08 p.m. EDT (2308 GMT) Thursday from Cape Canaveral Space Force Station in Florida. The launch will be the second of the day from Florida’s Space Coast, marking the shortest turnaround between launches at Cape Canaveral since 1967.

The Falcon 9 is set for liftoff from Space Launch Complex 4 at Cape Canaveral with the Korea Pathfinder Lunar Orbiter, a 1,495-pound (678-kilogram) spacecraft the size of a large refrigerator that will collect data on lunar geology and search for evidence of water ice hidden in craters at the moon’s poles.

The launch of the Falcon 9 rocket Thursday evening will come 12 hours and 39 minutes after the liftoff of a United Launch Alliance Atlas 5 rocket with a U.S. military missile warning satellite at 6:29 a.m. EDT (1029 GMT) from pad 41, located about a mile-and-a-half (2.5 kilometers) north of SpaceX’s launch complex.

The last time there was such a short span between two orbital-class rockets lifting off from Cape Canaveral was on Sept. 7 and 8, 1967, when a Thor Delta rocket and an Atlas Centaur rocket launched less than 10 hours apart. The Thor Delta rocket launched a recoverable spacecraft called Biosatellite 2 with a host of biological research experiments, and the Atlas Centaur sent NASA’s Surveyor 5 lander to the moon.

A moon mission makes up the second half of Thursday’s doubleheader, too.

The KPLO mission is a pathfinder, or precursor, for South Korea’s future ambitions in space exploration, which include a robotic landing on the moon in the early 2030s. South Korea has also signed up to join the NASA-led Artemis Accords, and could contribute to the U.S. space agency’s human lunar exploration program.

The KPLO mission is also named Danuri, a combination of the words “dal” and “nurida” in Korean, meaning “enjoy the moon.”

“The basic idea of this mission is technological development and demonstration,” said Eunhyeuk Kim, the mission’s project scientist from the Korea Aerospace Research Institute. “Also, using the science instruments, we are hoping to get some useful data on the lunar surface.”

KPLO will test a new South Korean spacecraft platform designed for deep space operations, along with new communication, control, and navigation capabilities, including the validation of an “interplanetary internet” connection using a disruption tolerant network. 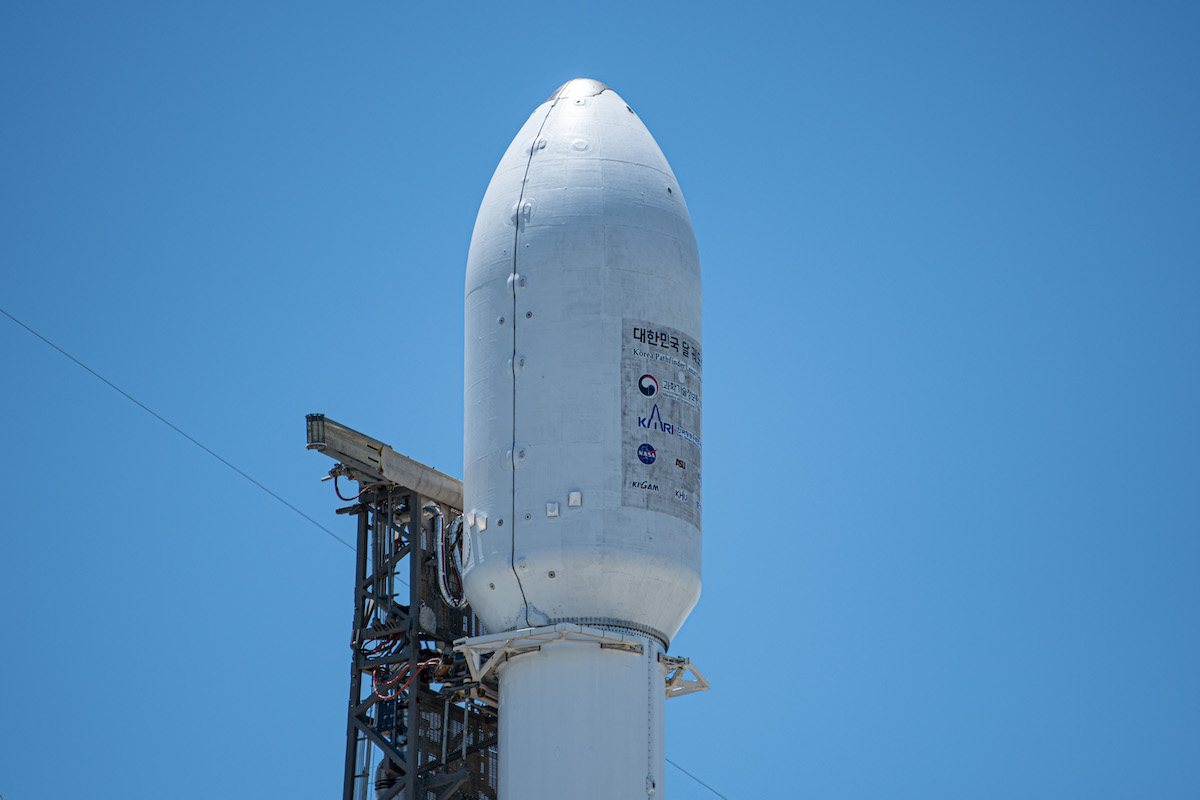 The mission’s scientific objectives include mapping the lunar surface to help select future landing sites, surveying resources like water ice on the moon, and probing the radiation environment near the moon.

The mission cost about $180 million to develop. The Falcon 9 rocket will launch the KPLO spacecraft toward the moon on a low-energy, fuel-efficient ballistic lunar transfer trajectory, a path being pioneered by NASA’s small CAPSTONE spacecraft, a tech demo mission that launched in June on a Rocket Lab mission and is scheduled to slip into orbit around the moon in November.

Instead of reaching the moon in a few days, like NASA’s Apollo missions, KPLO will take about four months to complete the journey.

If KPLO launches in its current launch period, its arrival date at the moon is fixed on Dec. 16. The Falcon 9 will propel the spacecraft on a trajectory that will take it close to the L1 Lagrange point, a gravitationally-stable location nearly a million miles (1.5 million kilometers) from the daytime side of the Earth, some four times farther than the moon.

Gravitational forces will naturally pull the spacecraft back toward the Earth and the moon, where the Korean probe will be captured in orbit Dec. 16. A series of propulsive maneuvers with the spacecraft’s thrusters will steer KPLO into a circular low-altitude orbit about 60 miles (100 kilometers) from the lunar surface by New Year’s Eve.

After a month of commissioning and tests, the spacecraft’s year-long primary science mission should begin around Feb. 1. If the orbiter has enough fuel, mission managers could consider an extended mission beginning in 2024, Kim said.

The launch Thursday will be SpaceX’s 34th Falcon 9 flight of the year. If successful, the KPLO launch will also be the 32nd space mission of the year from Cape Canaveral to fly into orbit or toward more distant destinations. 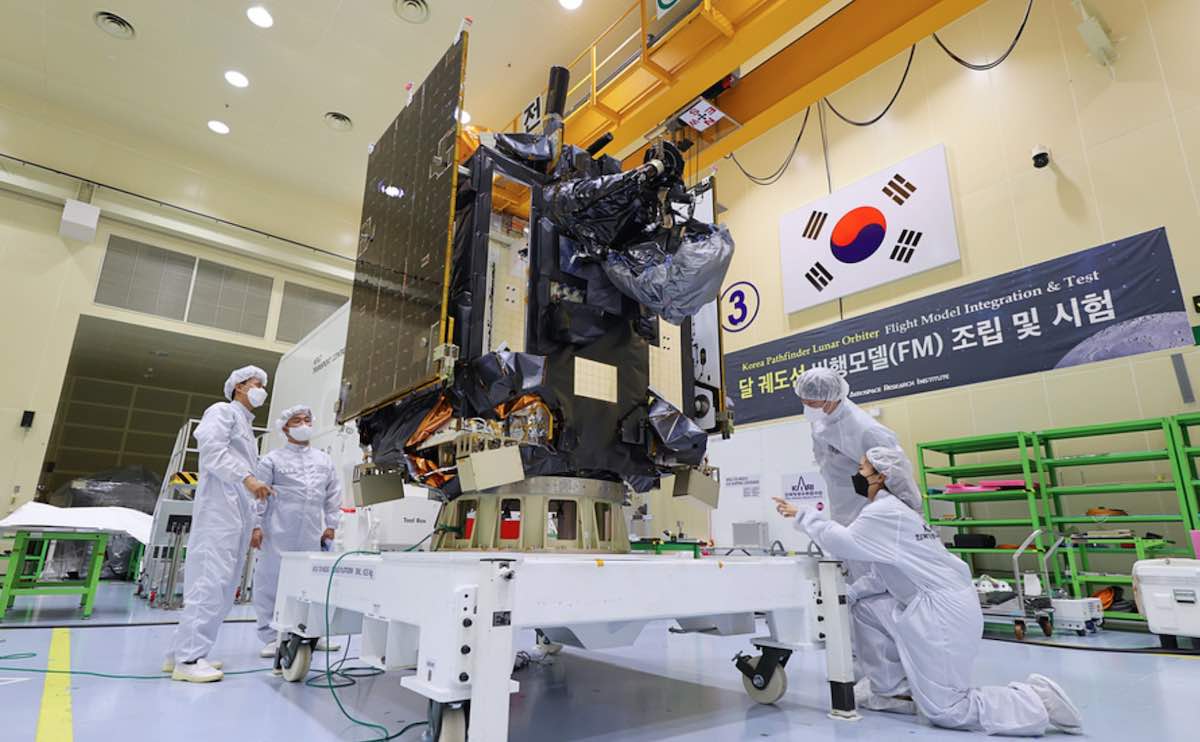 After liftoff, the Falcon 9 rocket will vector its 1.7 million pounds of thrust — produced by nine Merlin engines — to steer east over the Atlantic Ocean.

The rocket will exceed the speed of sound in about one minute, then shut down its nine main engines two-and-a-half minutes after liftoff. The booster stage will release from the Falcon 9’s upper stage, then fire pulses from cold gas control thrusters and extend titanium grid fins to help steer the vehicle back into the atmosphere.

The booster flying on the KPLO mission, known as B1052, will launch on its sixth trip to space. It debuted as a side booster on two SpaceX Falcon Heavy missions in 2019, then teams converted its to fly as a Falcon 9 rocket.

While the first stage comes back to Earth for landing, the Falcon 9’s upper stage will fire its single Merlin engine two times, first for six minutes to reach a parking orbit, then again at T+plus 34 minutes for a 60-second burn to send the KPLO spacecraft on the way to the moon.

Separation of the KPLO spacecraft is expected at T+plus 40 minutes, 16 seconds. The probe will extend its solar panels and begin transmitting to ground controllers within about 20 minutes of deployment from the Falcon 9, according to KARI.