Live coverage of the countdown and launch of a SpaceX Falcon 9 rocket from Space Launch Complex 40 at Cape Canaveral Space Force Station in Florida with the Globalstar FM15 voice and data relay satellite. Follow us on Twitter.

The Falcon 9’s mission was longer than usual, with three burns by the rocket’s upper stage engine before deploying the Globalstar FM15 spacecraft about an hour and 53 minutes after liftoff.

The launch wrapped up a busy weekend for SpaceX, following back-to-back launches Friday and Saturday from the Kennedy Space Center in Florida and Vandenberg Space Force Base in California with 53 more Starlink internet satellites and the German military’s SARah 1 radar reconnaissance satellite.

Helium pressurant also flowed into the rocket in the last half-hour of the countdown. In the final seven minutes before liftoff, the Falcon 9’s Merlin main engines were thermally conditioned for flight through a procedure known as “chilldown.” The Falcon 9’s guidance and range safety systems were also configured for launch at 12:27:36 a.m.

The rocket exceeded the speed of sound in about one minute, then shut down its nine main engines two-and-a-half minutes after liftoff. The booster released from from the Falcon 9’s upper stage, then fired pulses from cold gas control thrusters and extended titanium grid fins to help guide the vehicle back into the atmosphere. 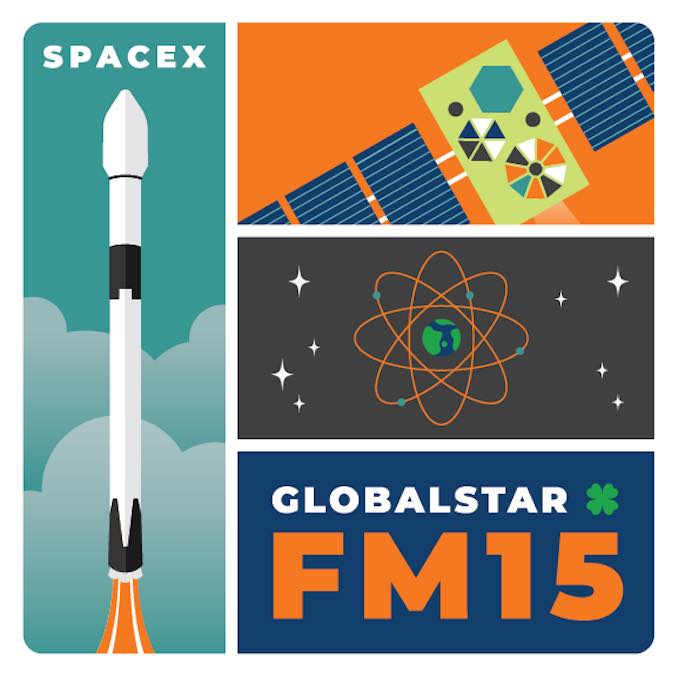 The booster stage that flew early Sunday — tail number B1061 — made its ninth trip to space. It debuted with the launch of two NASA crew missions to the International Space Station in November 2020 and April 2021, then launched SiriusXM’s SXM 8 radio broadcasting satellite last June and a space station cargo missions last August.

The Falcon first stage landed Sunday about the same time as the Falcon 9’s second stage engine cut off to complete its first orbital insertion burn. The upper stage coasted halfway around the world before reigniting for about four seconds T+plus 64 minutes, then for around eight seconds at T+plus 107 minutes.

In an unusual move for an established satellite operator, Globalstar did not acknowledge any details about the launch of its spare satellite in advance of Sunday’s mission. Globalstar released a statement in a quarterly financial report last month that said it planned to launch the backup spacecraft in the “near future.” At the time, the company did not identify the launcher for the spare satellite.

The launch Sunday was the first for a Globalstar satellite since 2013, and adds capacity for the company’s commercial network providing voice and data connectivity for satellite phones, asset tracking, and internet-of-things applications.

SpaceX did not mention any payloads that could be riding to orbit with the Globalstar FM15 satellite on Sunday’s mission. The relatively light weight of the Globalstar satellite would typically leave enough propellant reserve on the Falcon 9’s booster to return to landing, but Sunday’s mission featured a landing on SpaceX’s offshore recovery platform.