Live coverage of the countdown and launch of a SpaceX Falcon 9 rocket from Space Launch Complex 40 at Cape Canaveral Space Force Station, Florida. The Falcon 9 rocket will launch the SES 22 geostationary communications satellite. Follow us on Twitter.

SpaceX is preparing to launch a television broadcasting satellite Wednesday for SES, with liftoff of a Falcon 9 rocket from Cape Canaveral set for 5:04 p.m. EDT (2104 GMT).

There’s a two-hour window for SpaceX’s launch Wednesday, and the official launch weather outlook predicts an 80% chance of favorable weather for liftoff.

SpaceX ground crews rolled the Falcon 9 rocket and its commercial satellite payload to pad 40 earlier this week, and raised it vertical in the launch mount at pad 40 for final checkouts. The 229-foot-tall (70-meter) launcher will be filled with a million pounds of kerosene and liquid oxygen propellants in the final 35 minutes of the countdown Wednesday.

If weather and technical parameters are all “green” for launch, the nine Merlin main engines on the first stage booster will come to life with the help of an ignition fluid called triethylaluminum/triethylborane, or TEA-TEB. Once the engines are at full throttle, hydraulic clamps will open to release the Falcon 9 for its climb into space.

The nine main engines will produce 1.7 million pounds of thrust for about two-and-a-half minutes, propelling the Falcon 9 and the SES 22 communications satellite into the upper atmosphere. Then the booster stage — tail number B1073 in SpaceX’s fleet — will shut down and separate from the Falcon 9’s upper stage. 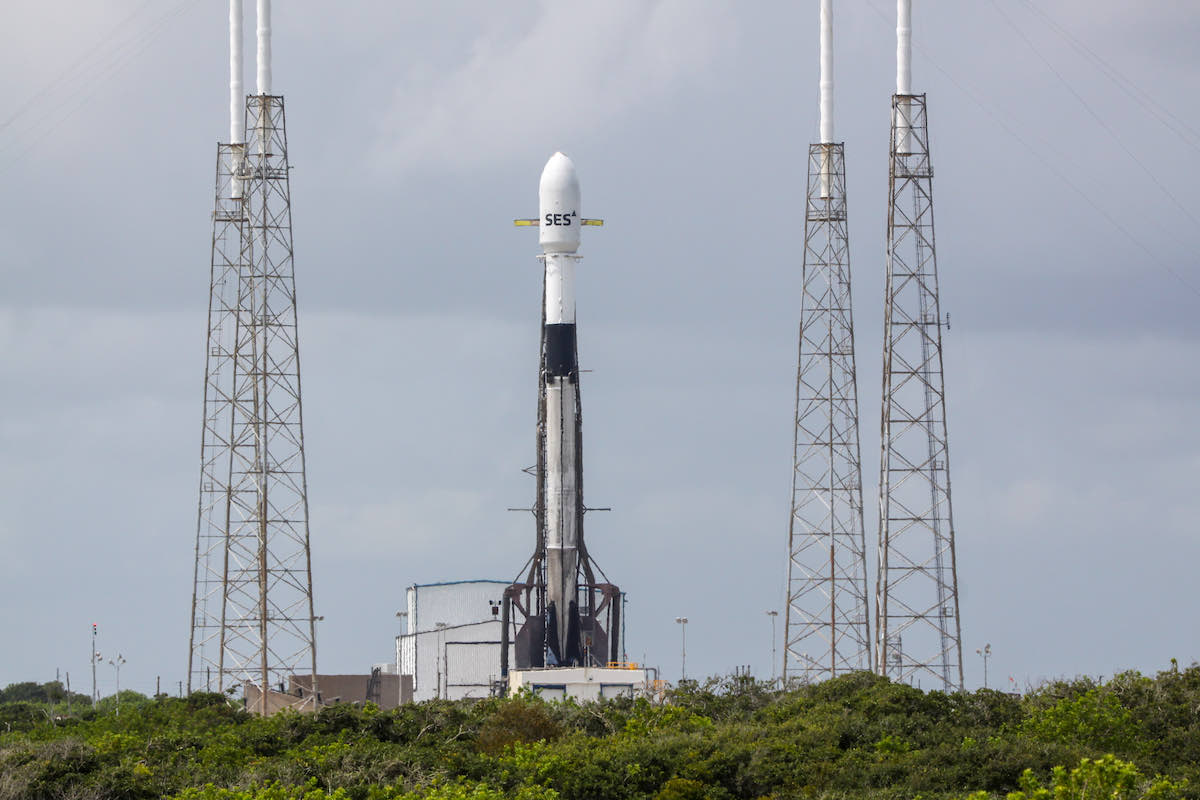 The booster will extend titanium grid fins and pulse cold gas thrusters to orient itself for a tail-first entry back into the atmosphere, before reigniting its engines for a braking burn and a final landing burn, targeting a vertical decent to the drone ship “A Shortfall of Gravitas” parked more than 400 miles (about 670 kilometers) east of Cape Canaveral.

The landing will mark the completion of the booster’s second flight to space, following a debut mission in May carrying Starlink internet satellites into orbit.

The upper stage’s single Merlin engine will fire two times to inject the SES 22 spacecraft into an elliptical, or oval-shaped, transfer orbit ranging more than 20,000 miles above Earth. Deployment of the SES 22 satellite from the Falcon 9 upper stage is scheduled at T+plus 33 minutes, 26 seconds, according to a mission timeline provided by SpaceX.

Built in France by Thales Alenia Space, the SES 22 satellite weighs about 7,700 pounds, or 3.5 metric tons, fully fueled for launch.

After separation from the Falcon 9 launcher, SES 22 will unfurl its solar panels and antennas, and perform a series of orbit-raising burns with a liquid-fueled engine to circularize its orbit at geostationary altitude over the equator. After completing in-orbit verification testing, SES 22 is scheduled to enter commercial service in early August, according to Christophe De Hauwer, SES’s chief strategy and development officer. 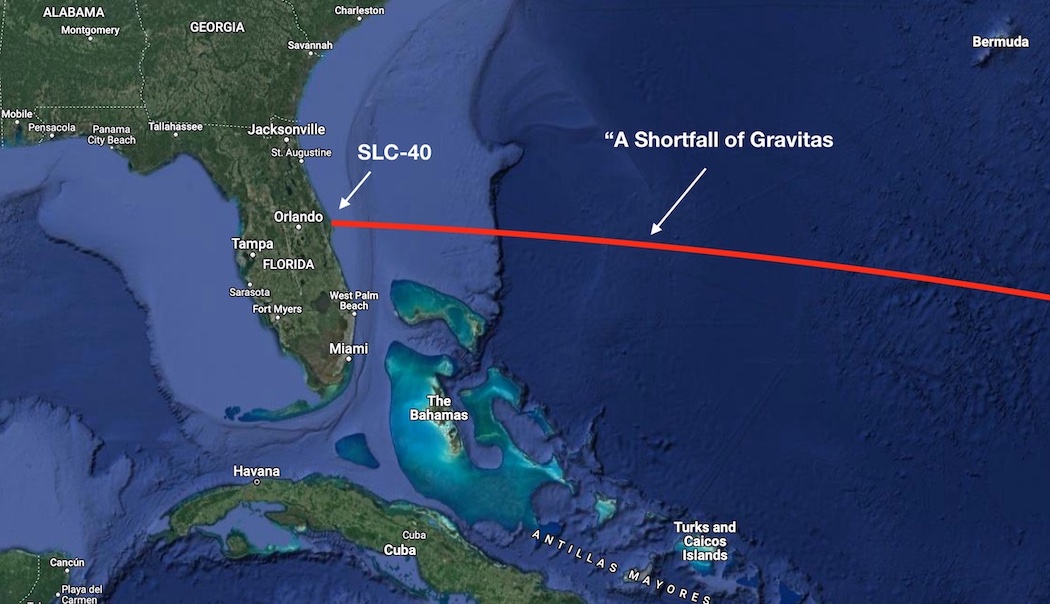 This map illustrates the predicted ground track for the Falcon 9 rocket on the SES 22 mission, with the locations of pad 40 and the drone ship “A Shortfall of Gravitas” labeled. Credit: Spaceflight Now

The SES 22 satellite is the first mission to replenish SES’s fleet of C-band television broadcast satellites to replace C-band capacity being transitioned to 5G cellular network services by the Federal Communications Commission.

“SES 22 is a C-band satellite, so it’s part of our program of for the C-band clearing in the U.S.,” De Hauwer said in a pre-launch interview with Spaceflight Now. “So it’s a C-band only satellite. It will be launched to 135 degrees west, which is the location we are replenishing, from where we will provide mostly TV and radio services over the U.S., but also some data services over the country.”

From its parking spot in geostationary orbit more than 22,000 miles (nearly 36,000 kilometers) over the equator at 135 degrees west longitude, SES 22 will begin a 15-year mission beaming cable TV programming for SES’s corporate clients.

The Federal Communications Commission’s finalized a program in 2020 to clear 300 megahertz of C-band spectrum for the roll-out of 5G mobile connectivity networks.

In compensation for losing the spectrum, SES is set to receive nearly $4 billion from the winners of an auction to redistribute the C-band capacity to 5G operators. The reimbursement will pay for the expense of building and launching the new satellites. Intelsat, another large C-band telecom operator, is set to receive nearly $5 billion to pay for its own new communications satellites.

SES ordered six new C-band broadcasting satellites, including one ground spare, from Thales Alenia Space, Boeing, and Northrop Grumman in 2020. SES 22 is the first of the six new satellites to reach the launch pad.

The remaining four C-band replacement satellites SES plans to send up are booked to launch in pairs on a United Launch Alliance Atlas 5 rocket and a SpaceX Falcon 9 rocket from Cape Canaveral later this year. 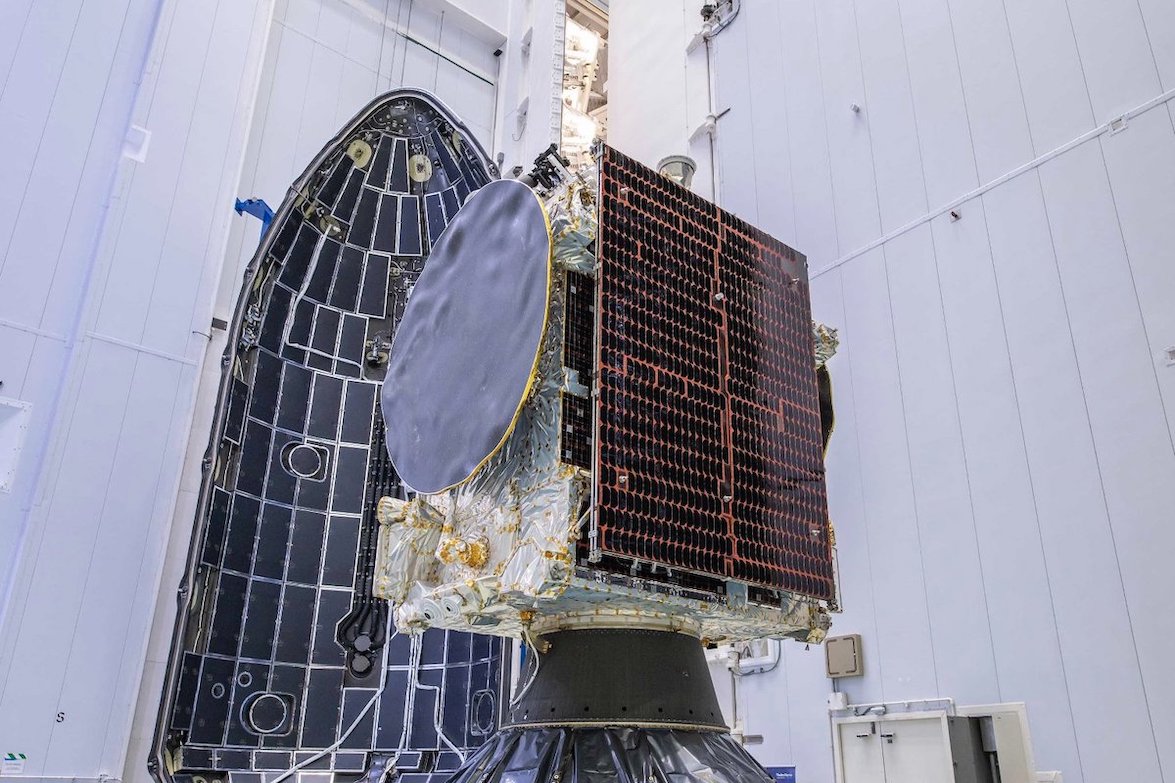