Live coverage of the countdown and launch of a SpaceX Falcon 9 rocket from Launch Complex 39A at NASA’s Kennedy Space Center in Florida. The Starlink 4-25 mission will launch SpaceX’s next batch of 53 Starlink broadband satellites. Follow us on Twitter.

SpaceX sent another cluster of 53 Starlink internet satellites into orbit Sunday aboard a Falcon 9 rocket, the company’s 33rd mission of the year and sixth launch of July. Liftoff from pad 39A at NASA’s Kennedy Space Center in Florida occurred at 9:38 a.m. EDT (1338 GMT).

The rocket headed northeast from the Kennedy Space Center, aiming to deliver the flat-packed broadband relay stations to an orbit ranging between 144 miles and 210 miles in altitude (232-by-338 kilometers). Deployment of the 53 flat-packed satellites from the Falcon 9’s upper stage occurred about 15 minutes after liftoff.

After liftoff, the Falcon 9 rocket  vetored its 1.7 million pounds of thrust — produced by nine Merlin engines — to steer northeast over the Atlantic Ocean. 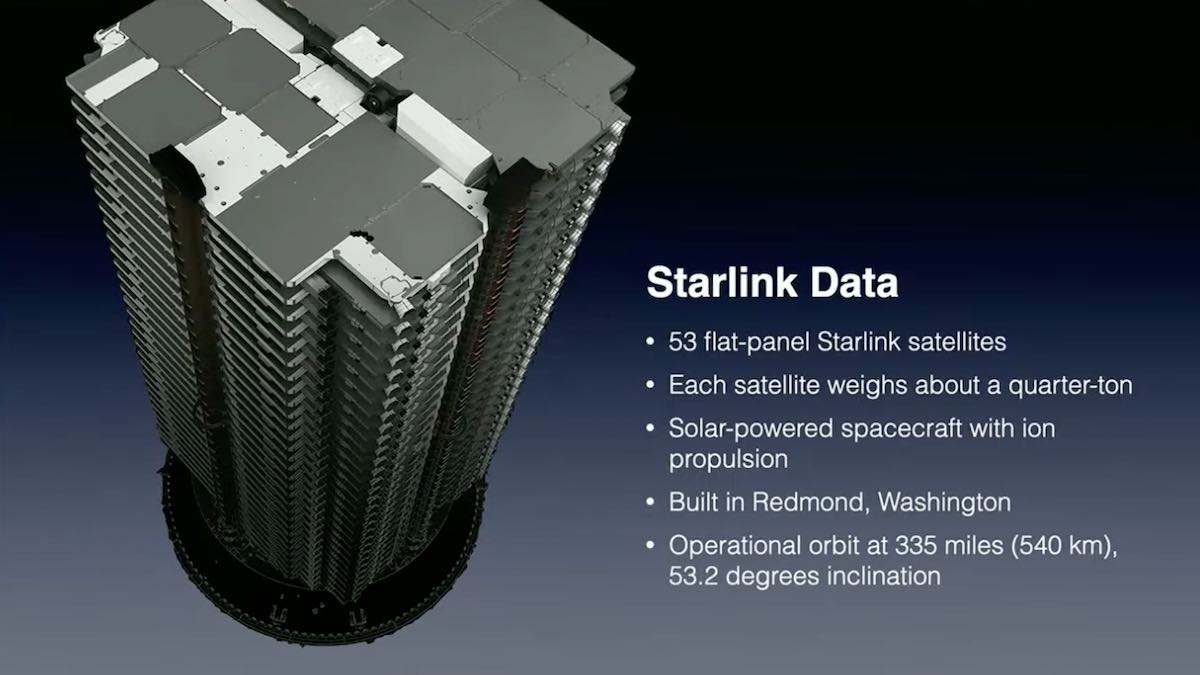 The booster flying on the Starlink 4-25 mission, known as B1062, launched on its eighth trip to space. It debuted with the launch of a U.S. military GPS navigation satellite in November 2020, and launched the all-private Inspiration4 and Axiom-1 crew missions in September 2021 and in April of this year.

Most recently, the booster flew June 8 with the Egyptian Nilesat 301 geostationary communications satellite.

Landing of the first stage on Sunday’s mission occurred moments after the Falcon 9’s second stage engine cut off to deliver the Starlink satellites into orbit. Separation of the 53 spacecraft, built by SpaceX in Redmond, Washington, from the Falcon 9 rocket occurred at T+plus 15 minutes, 24 seconds.

Retention rods released from the Starlink payload stack, allowing the flat-packed satellites to fly free from the Falcon 9’s upper stage in orbit. The 53 spacecraft will unfurl solar arrays and run through automated activation steps, then use krypton-fueled ion engines to maneuver into their operational orbit.

The Falcon 9’s guidance computer aimsedto deploy the satellites into an elliptical orbit at an orbital inclination of 53.2 degrees to the equator. The satellites will use on-board propulsion to do the rest of the work to reach a circular orbit 335 miles (540 kilometers) above Earth.