Long anticipated comet K2 PanSTARRS puts on its best show through the end of 2022.

An icy visitor from the distant Oort Cloud is still in view, if you know exactly where to look for it. The comet is C/2017 K2 PanSTARRS. It’s in the name: the comet was discovered five years ago in 2017, an unusually long period of lead time, even for a long-period comet. Though it (unfortunately) never entered the inner solar system, mid-2022 is the best time to see the comet, and its distance also means that—unlike swift short period comets—K2 PanSTARRS will linger in the sky for a while, for the remainder of 2022. 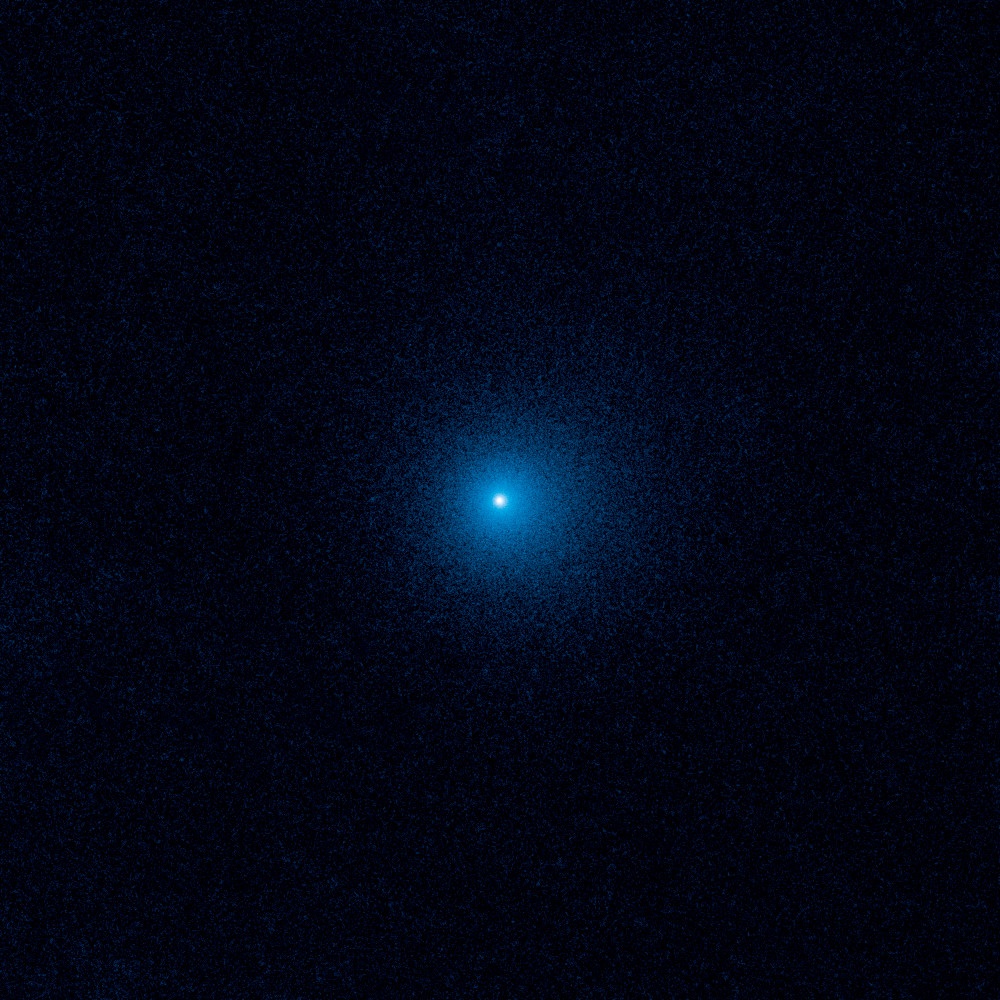 This Hubble Space Telescope image shows a fuzzy cloud of dust, called a coma, surrounding the comet C/2017 K2 PANSTARRS while it was still over 2.4 billion kilometres from the Sun, just beyond Saturn’s orbit. NASA/ESA/Hubble/STcI

The comet was discovered by the prolific automated comet hunter the Panoramic Survey Telescope and Rapid Response System (PanSTARRS) on the night of May 21, 2017. The distant (16 Astronomical Units-AU) discovery gave astronomers pause: only Comet(s) C/1995 O1 Hale-Bopp (in 1997) and massive comet C/2014 UN271 Bernardinelli-Bernstein have ever been seen as active at such a great distance. This is usually indicative of a prelude to a good show.

The orbit of the comet is likely dynamically new, which explains its tempestuous behavior while it’s still far from the Sun. K2 PanSTARRS will reach perihelion 1.8 AU (just beyond the orbit of Mars) later this year on December 19th. This passage will also shorten its orbit down to ‘only’ 18,000 years, with an outbound aphelion 1400 AU distant. 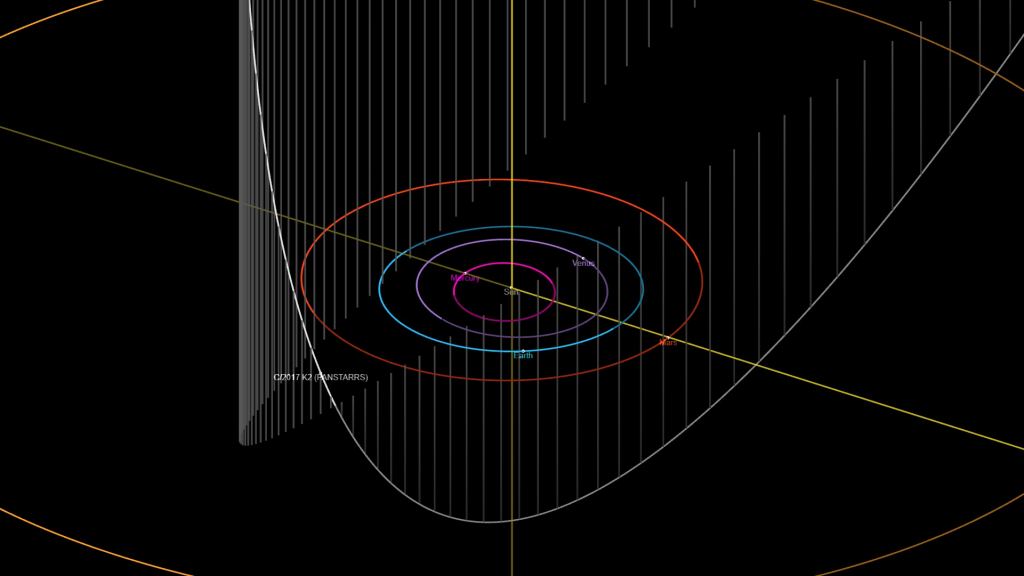 Had comet K2 PanSTARRS entered deep into the inner solar system like Hale-Bopp in the late 1990s, then we would be in for a truly spectacular show. Ironically, Hale-Bopp passed us about six months on the opposite side of Earth’s orbit—and still managed to put on an amazing show. Also like K2 PanSTARRS, Hale-Bopp had its orbit shortened (thanks to Jupiter) from 4,200 years (inbound) to 2,533 years (outbound).

During the last half of 2022, Comet K2 PanSTARRS loiters in Ophiuchus, and makes the plunge into Scorpius the Scorpion, crossing the ecliptic plane southward in late August. This means that the time for northern hemisphere observers to check out comet K2 PanSTARRS is now, before we lose it in the southern sky. In early August, the comet rides high to the south around 9 PM local.

Comet K2 PanSTARRS already passed some red-letter dates in early July, as it passed 1.8 AU from the Earth on July 14th, and passed just 25’ from from the globular cluster Messier 10 in Ophiuchus, affording many an astrophotographer a fine photo-op. 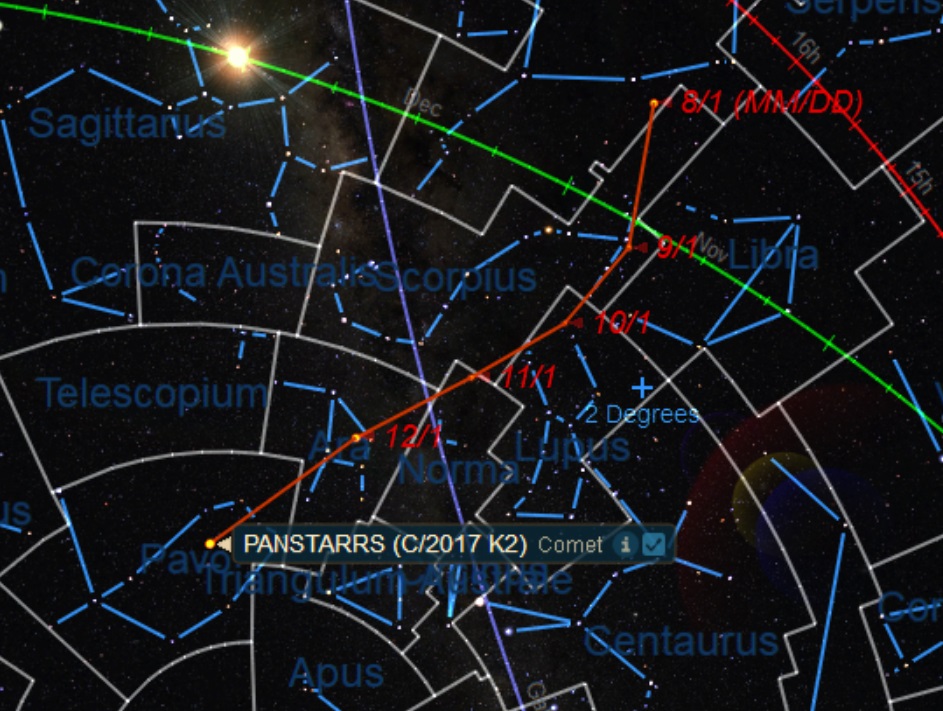 The celestial path of comet K2 PanSTARRS for the remainder of 2022. Credit: Starry Night.

Here’s the month-by-month dates with destiny for Comet K2 PanSTARRS, for the remainder of 2022:

(Note: unless otherwise noted ‘near’ denotes less than one degree).

4-Passes into the constellation Scorpius

25-Enters back into Scorpius 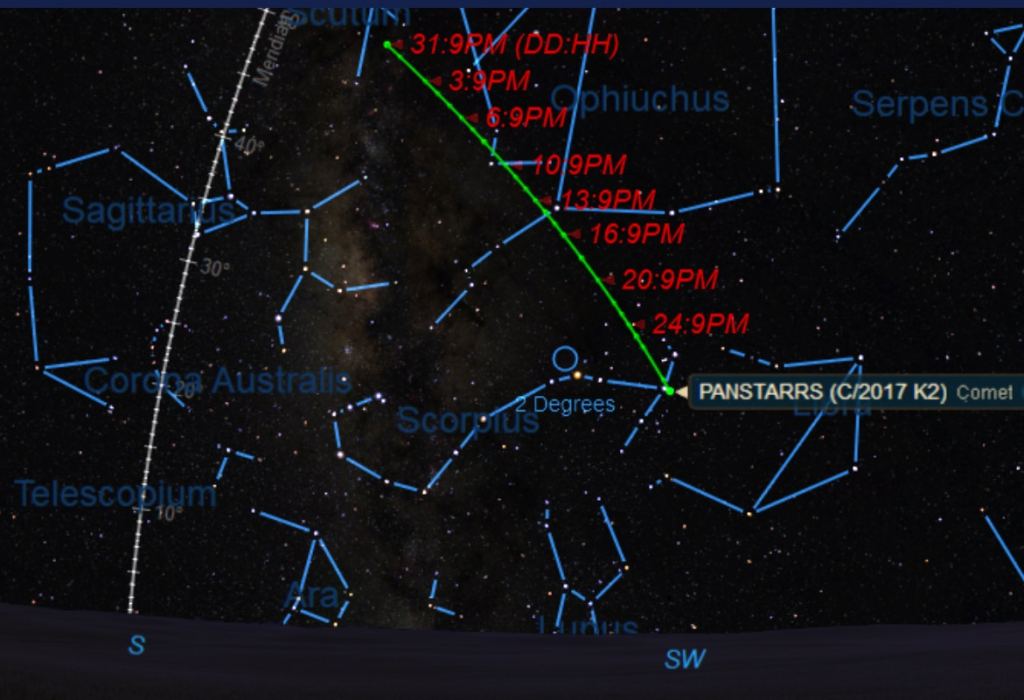 The 9PM local path of the comet through August, as seen looking southward from latitude 35 degrees north. Credit: Starry Night.

3-Near the waxing crescent Moon

9-Near the +2.9 magnitude star Pi Scorpii

22-Passes into the constellation Lupus the Wolf

19-Crosses back into Scorpius

31-Crosses into the constellation Norma the Carpenter’s Square

12-Crosses into the constellation Ara the Altar 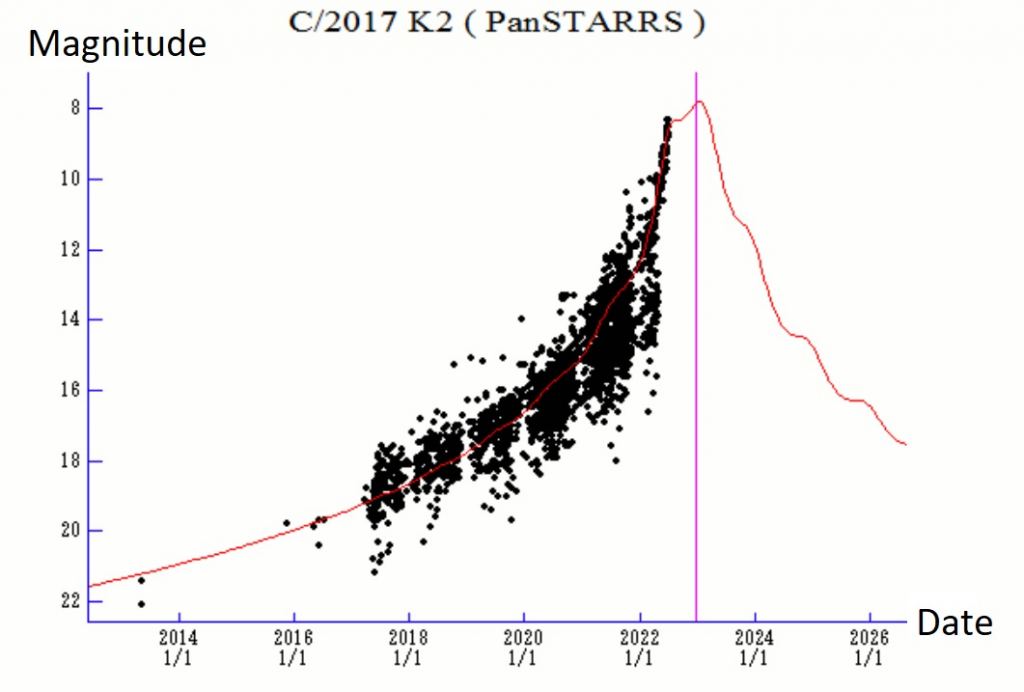 15-Passes into the constellation of Pavo the Peacock

In 2023, the comet then drops back down below +10th magnitude and lingers in the southern hemisphere sky as it recedes into the depths of the outer solar system, not to return again until after (mark your calendars) 20,000 A.D.