News Astronomy > News > JWST Also Looked Inside the Solar System, at Jupiter and its Moons

After the ‘big reveal’ earlier this week of the James Webb Space Telescope’s first full color images and spectra of the universe, the science team has now released data from closer to home. One stunning shot includes Jupiter and its moons, and there are also data from several asteroids. These latest data are actually just engineering images, designed to test JWST’s ability to track solar system targets, as well as test out how the team can produce images from the data. The quality and detail in these test images have excited the mission scientists.

“Combined with the deep field images released the other day, these images of Jupiter demonstrate the full grasp of what Webb can observe, from the faintest, most distant observable galaxies to planets in our own cosmic backyard that you can see with the naked eye from your actual backyard,” said Bryan Holler, a scientist at the Space Telescope Science Institute in Baltimore, in a NASA blog post. Holler was part of the team who helped plan these observations.

This view from JWST’s NIRCam instrument’s short-wavelength filter clearly shows the distinct cloud bands around the giant planet as well as the Great Red Spot, Jupiter’s famous gigantic storm. Scientists say the iconic spot appears white in this image because of the way Webb’s infrared image was processed.

Also clearly visible at left is Europa, which is seen as a dark spot with bright edges, nd interestingly, in the infrared, Europa is bright enough to create diffraction spikes. Diffraction spikes come from the hexagonal shape of the mirror segments, diffracting the light from bright objects like stars, or in this case a nearby moon.

But look closely, and Europa’s shadow can be seen to the left of the Great Red Spot. Other visible moons include Thebe and Metis, which are seen as small, white spots. 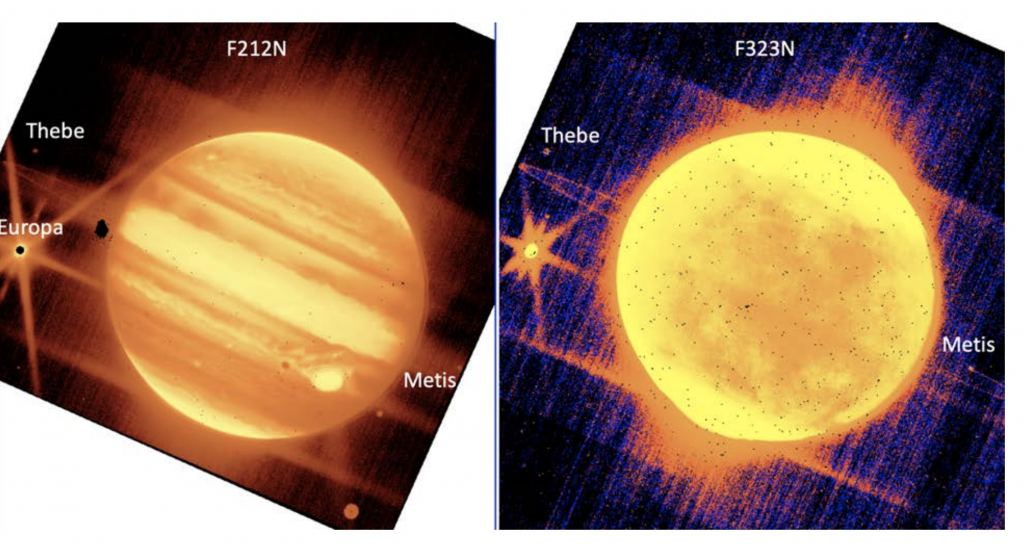 Even Jupiter’s thin rings are visible in some of the new images, using JWST’s NIRcam long-wavelength filter image. The very diffuse rings were first discovered by the Voyager spacecraft in 1979.

“What JWST will do for Jupiter’s rings is give exquisite image stability and quality, to characterize ring structure, and its sources, sinks and evolution,” said Heidi Hammel on Twitter, Hammel is a JWST interdisciplinary scientist who has early observing time on the telescope to study Jupiter. 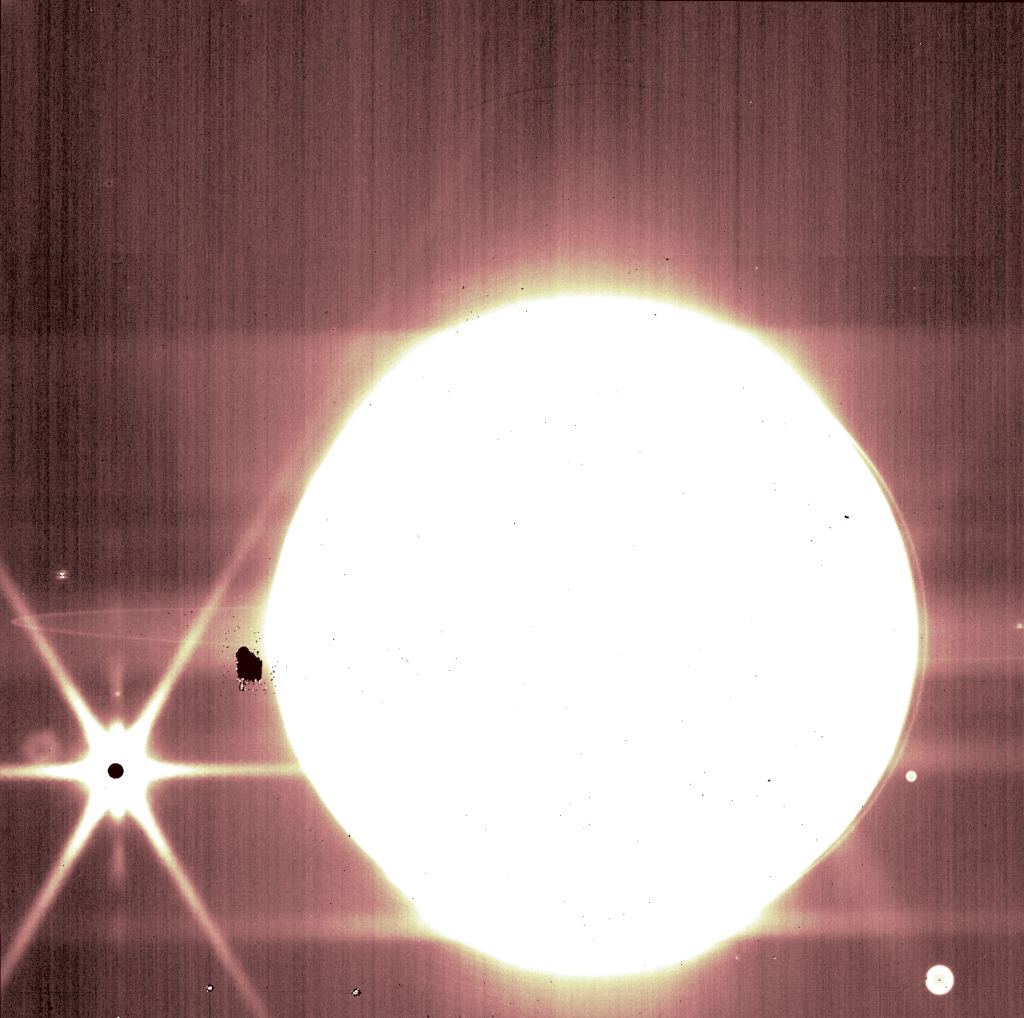 Jupiter and some of its moons are seen through NIRCam’s 3.23 micron filter. Credits: NASA, ESA, CSA, and B. Holler and J. Stansberry (STScI)

Scientists were very eager to see these images because they are proof that JWST can observe the satellites and rings near bright solar system objects such as Jupiter, Saturn, and Mars. Some exciting upcoming observations is to use the new space telescope to look for plumes of water spewing out of moons like Europa and Saturn’s moon Enceladus. Webb may be able to see the signatures of plumes depositing material on the surface on Europa.

“I think that’s just one of the coolest things that we’ll be able to do with this telescope in the solar system,” said Stefanie Milam, Webb’s deputy project scientist for planetary science NASA’s Goddard Space Flight Center.

Astronomer Judy Schmidt was able to retrieve the JWST data of Jupiter and create this image, which she shared on Twitter. Even the Great Red Spot is bright enough with the NIRCam data to create diffraction spikes.

Ok, here's a for real JWST Jupiter. The read noise (vertical lines) is… significant. But, look, the GRS has its own diffraction spikes. This is the NIRCam data with f322w2-f323n overlaid in red and f212n in sky blue. Bg is grayscale combo of both. pic.twitter.com/VWNXFBLpwE

But other unusual features show up as well, and scientists aren’t sure yet if the “extra outline” on the eastern limb is real or an image artifact.

Heidi Hammel commented that her team noticed “that weird edge right and started discussing detached haze layers or air glow.” This illustrates how scientists are still learning how to interpret JWST’s infrared data. But to reiterate, Hammel added, “The Jupiter teams are so excited!”

JWST also obtained these images of Jupiter and Europa moving across the telescope’s field of view in three separate observations. This test demonstrated the ability of the observatory to find and track guide stars in the vicinity of bright Jupiter.

Jupiter and its moon Europa are seen in this animation made from three images taken through the NIRCam instrument 2.12 micron filter. Click on the image to play the gif again. Credits: NASA, ESA, CSA, and B. Holler and J. Stansberry (STScI)

Scientists were very interested to test out how fast an object could be moving and still be tracked by JWST, and to do so, during the commissioning period, Webb tracked an asteroid called 6481 Tenzing, located in the asteroid belt between Mars and Jupiter.

Engineers said that JWST was designed with the requirement to track objects that move as fast as Mars, which has a maximum speed of 30 milliarcseconds per second. During commissioning, the Webb team conducted observations of various asteroids, and proved they can get valuable data with all of the science instruments for objects moving up to 67 milliarcseconds per second, which is more than twice the expected baseline. They said it is “similar to photographing a turtle crawling when you’re standing a mile away.

Asteroid 6481 Tenzing, center, is seen moving against a background of stars in this series of images taken by NIRCam. Click on the image to play the gif again. Credits: NASA, ESA, CSA, and B. Holler and J. Stansberry (STScI)

You can read a paper from JWST scientists, who characterized the performance of all of the telescope’s instruments during the commissioning period.

The post JWST Also Looked Inside the Solar System, at Jupiter and its Moons appeared first on newsastronomy.com.