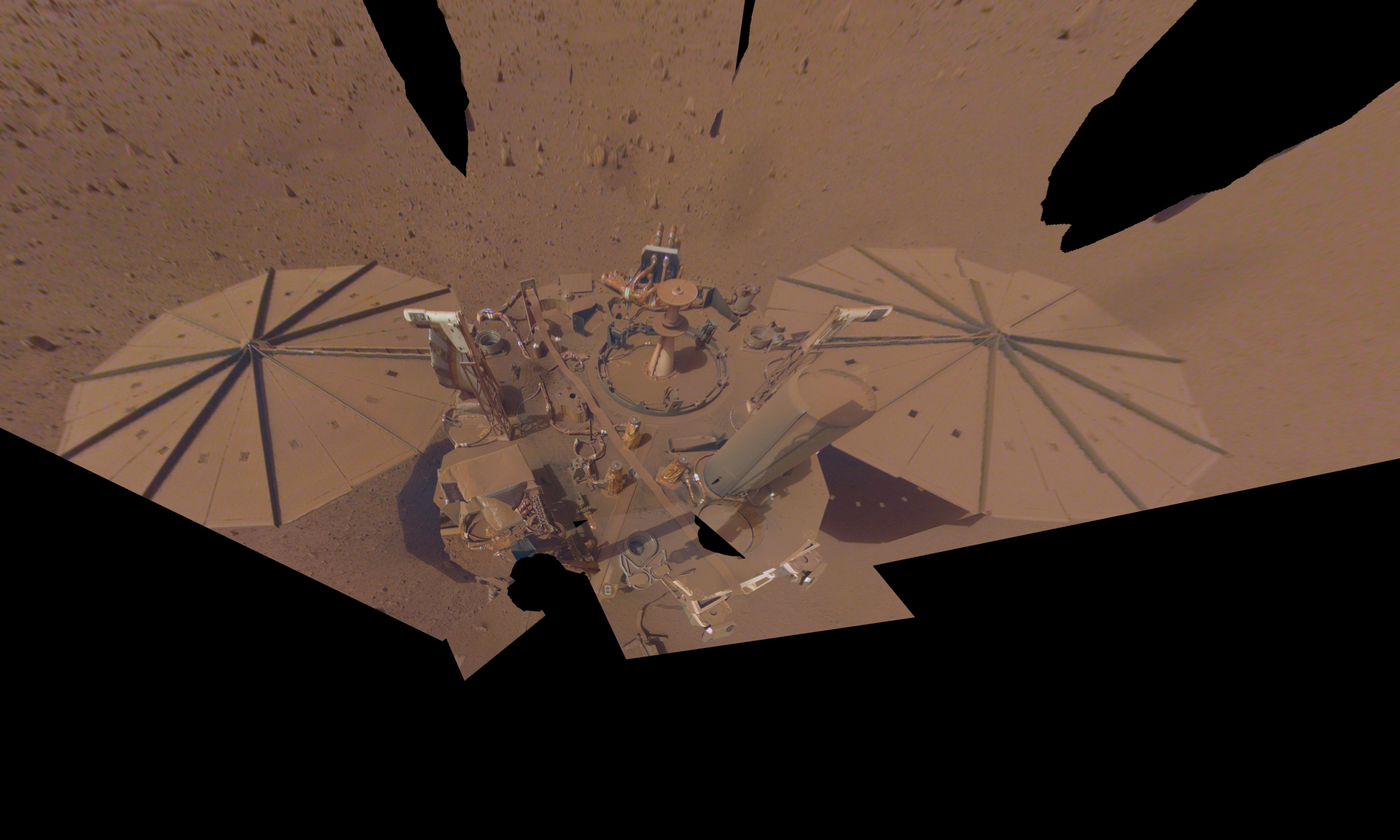 In May 2022, members of NASA’s InSight Mars lander team announced that power levels on the lander were diminishing and that they expected the lander to become inoperative by December 2022. However, InSight’s teams want to push the lander to do as much as possible in its final months and have chosen to operate the lander’s seismometer for longer than previously planned.

Meanwhile, NASA’s Curiosity rover, closing in on its 10-year landing anniversary on Mars, continues to drive around Gale Crater and investigate interesting rock and surface formations — providing scientists with hints to what Mars’ ancient past may have looked like.

On May 17, 2022, team members of NASA’s InSight Mars lander announced that the mission, which started with a launch from Vandenburg Space Force Base in May 2018, would close in late 2022 as power levels on the lander diminished.

The original plan for InSight’s final months was to slowly retire specific instruments and science operations as its power levels dropped lower and lower each day. The lander’s arm was moved to its “retirement position” in late May, with instruments slowly being shut off as the weeks went on.

However, in late June, teams revised their plans for InSight’s final months to maximize the science they can get out of the lander. Initially, teams had planned to shut off the seismometer, the last operating science instrument, in late June to conserve energy. Instead, the team has now opted to keep the seismometer on until the end of August or into early September.

As power wanes, the @NASAInSight team has revised the mission’s timeline to maximize the chance of recording additional quakes on Mars.
However, this moves the projected end of operations from December 2022 to as early as August or September.
Details at https://t.co/EENpJPW3ZV

“The goal is to get scientific data all the way to the point where InSight can’t operate at all, rather than conserve energy and operate the lander with no science benefit,” said InSight’s project manager Chuck Scott of NASA’s Jet Propulsion Laboratory (JPL).

While keeping the seismometer will undoubtedly produce great scientific results, it will also drain InSight’s power faster, likely meaning the lander will become inoperative around the time the seismometer shuts off in August or September.

“InSight hasn’t finished teaching us about Mars yet. We’re going to get every last bit of science we can before the lander concludes operations,” said Lori Glaze, director of NASA’s Planetary Science Division.

The seismometer is the final instrument operating on InSight.

But how exactly are teams planning on keeping the seismometer running in the lander’s final months?

Teams plan to shut down InSight’s fault protection system that, on InSight and almost all other spacecraft, will shut down spacecraft systems and put the craft in “safe mode” when certain events threaten its overall health. Such events involve extremely high or low temperatures and extremely low spacecraft power. While this will allow InSight to keep its seismometer running longer, it leaves the lander susceptible to sudden and unexpected events that teams wouldn’t have time to act upon. 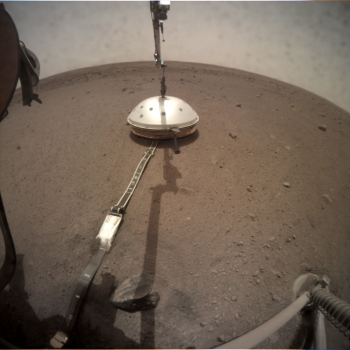 InSight began its mission in May 2018 and landed in the Elysium Planitia region of Mars on November 26, 2018, for what was planned as a two-year mission. Since landing, InSight has recorded an unprecedented 1,300+ marsquakes and collected massive amounts of data on Mars’ complex interior. Additionally, InSight has recorded local Martian weather data throughout its mission and helped investigate remnants of Mars’ ancient magnetic field — doing so over a nearly four-year mission, twice as long as originally expected.

InSight’s contribution to planetary science is invaluable and, when it does send its last transmission, its accumulated data will continue to give researchers clues to Mars’ past, present, and future for decades to come.

Another NASA Mars mission that has also long outlived its planned mission duration is Curiosity, NASA’s Mars Science Laboratory rover that landed in Gale Crater almost ten years ago on August 6, 2012. Since landing in Gale Crater, Curiosity has worked hard to photograph, investigate, and drill into interesting surface formations of scientific significance.

In 2014, Curiosity began what is likely to be its most daring trek — climbing Mount Sharp (Aeolis Mons). Mount Sharp is a large, 5.5km tall mountain located in the center of Gale Crater; it features exposed sediments and rock formations that could hold valuable secrets to Mars’ past.

(Click here to read about Curiosity’s many scientific contributions.)

In 2022, Curiosity has continued to climb and explore Mount Sharp, traveling through a transition zone between a clay-rich area and a sulfate-rich area. Scientists were originally planning to study just the clay-rich and sulfate-rich regions, but they have found the transition zone between the two areas to offer many clues to Mars’ past and possibly a significant shift in Mars’ climate that occurred billions of years ago.

This image shows the sulfate-rich region of the transition zone Curiosity is currently traveling through. (Credit: NASA/JPL-Caltech/MSSS)

Billions of years ago, when Mars once had flowing water on its surface, lakes and streams at the base of Mount Sharp in Gale Crater formed clay minerals and deposited sediment. Since climbing Mount Sharp and driving into the transition zone, Curiosity has discovered that the lakes and streams dried up into trickles, and large sand dunes formed over the sediments deposited by the water.

“We no longer see the lake deposits that we saw for years lower on Mount Sharp,” said Curiosity’s project scientist Ashwin Vasavada of JPL. “Instead, we see lots of evidence of drier climates, like dry dunes that occasionally had streams running around them. That’s a big change from the lakes that persisted for perhaps millions of years before.”

What’s more, Curiosity is detecting more and more sulfate as the rover continues to climb through the transition zone, and teams are planning to drill one last rock in the zone to provide a detailed glimpse into the mineral composition of the rocks.

Interesting mineral compositions aren’t the only unique geologic features in the transition zone, though. The hills in the transition zone likely formed in a dry environment with large sand dunes swept by wind. Over time, these hills hardened into rock, locking sediments in them that were likely deposited by small ponds or streams that wove around the dunes.

Today, these sediments are erosion-resistant stacks of flaky layers, with Curiosity often imaging these areas for scientists to analyze. 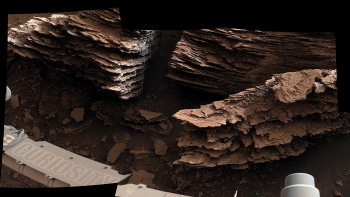 This image, taken by Curiosity, shows the erosion-resistant stacks of sediments once deposited by small ponds or streams in Gale Crater. (Credit: NASA/JPL-Caltech/MSSS)

Overall, Curiosity is nearing its 10th anniversary of surface operations on Mars — an astounding achievement for the rover itself, its team back on Earth, and the engineers that built it.

However, while the rover is still going strong, teams are beginning to notice significant wear and tear on the rover’s aluminum wheels, with teams noting large amounts of damage on one of the 19 grousers on Curiosity’s left middle wheel.

The grousers are the zig-zagging treads on Curiosity’s wheels, and five of the 19 grousers have been significantly damaged on the left middle wheel. As a result, teams will now decrease the time between the routine checkups Curiosity performs on its wheels.

Damaged wheels aren’t stopping Curiosity though, as it continues to climb and explore Mount Sharp every day.