India is set to launch its 55th Polar Satellite Launch Vehicle (PSLV) – in its Core Alone (CA) configuration – carrying nine payloads to a low Earth orbit (LEO). These include POEM, which will demonstrate using the fourth stage as a hosted payload bus. PSLV-C53 will launch from the second launch pad at the Satish Dhawan Space Centre on June 30, 2022, at 18:00 IST (12:30 UTC).

PSLV – India’s flagship and primary launch vehicle – is currently operated by NSIL and the Indian Space Research Organization (ISRO). The rocket was developed by the ISRO to launch their ever-growing payloads to orbit. From 1979 to 1987, India operated the Satellite Launch Vehicle (SLV)-3 and Augmented SLV (ASLV) as their first two orbit-capable rockets.

While they were India’s first orbit-capable rockets, the two were relatively simple – using only solid propellants and capable of lifting a max weight of just 150 kg. When both rockets were retired by 1994, only three of the eight launches were successfully able to take their payloads to their intended orbit. With the lessons learned from both vehicles and new larger payloads needing launches, the ISRO developed the PSLV.

In September 1993, PSLV made its first flight. However, due to a software issue, the flight failed to reach orbit. A year later, PSLV returned to flight and successfully delivered its payload to orbit. After its third launch in 1996, PSLV became operational to launch commercial, scientific, military, and exploration missions.

PSLV set a record in February 2017 during the PSLV-C37 mission, launching 104 satellites.

On August 31, 2017, during the PSLV-C39 mission, PSLV experienced its second and most recent mission failure. This mission did not reach its planned orbit due to its payload fairing failing to separate. Since then, 13 flights of PSLV have been completed – all being successes.

PSLV is a four-stage launch vehicle utilizing two liquid and two solid stages. Using its most powerful variant, PSLV can lift up to 3.8 metric tons (mT) to LEO and 1.4 mT to Geostationary Transfer Orbit (GTO).

The first stage is a solid Hydroxyl-Terminated Polybutadiene (HTPB)-based PS1 Solid 139 (S139) rocket motor. S139 generates a max thrust of 4,800 kN with a burn time of ~110 seconds. The stage is 2.8 meters in diameter and stands 20 meters tall. However, the S139 rocket motor is not just used on the PSLV. It is also the first stage for the Geostationary Launch Vehicle (GSLV) MK.II rocket.

Up to six solid HTPB S12 rocket boosters support the first stage. These boosters each generate a max thrust of 719 kN. The boosters are used on the PSLV-DL, PSLV-QL, and PSLV-XL variants. On this flight, the Core-Alone variant will be used and will not feature any S12 boosters. Using no boosters, this rocket variant is the smallest version for PSLV. 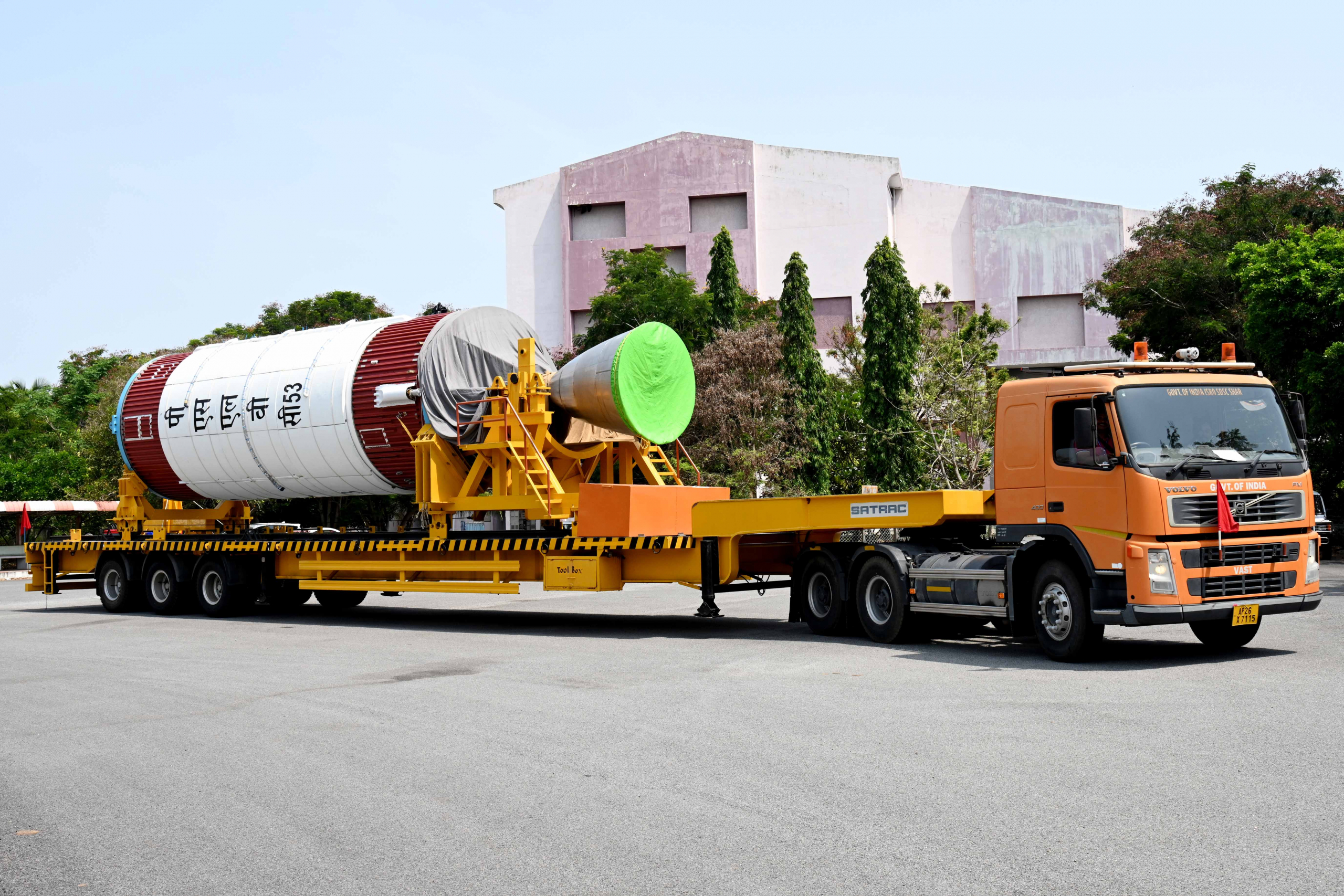 The second stage of PSLV-C53 arrives at the vehicle assembly building. (Credit: ISRO)

The second stage, PS2, is the first and largest liquid-based stage of the rocket. PS2 is powered by a single Unsymmetrical Dimethylhydrazine (UDMH)/Dinitrogen Tetroxide (N2O4) Vikas engine. In-flight, Vikas will generate 799 kN of thrust with a burn time of ~133 seconds. This stage is the same 2.8 meters in diameter and stands 12.8 meters tall.

The Vikas engine is India’s primary liquid-based engine. This engine was developed from the European Viking engine used on the early Ariane rockets. Currently, this engine is also used on the GSLV rocket family as both a booster and first-stage engine.

Next is the third stage, which returns to an HTPB-based solid rocket motor. PS3 uses a single S7 solid motor that generates 240 kN of thrust and burns for ~70 seconds. A similar motor to the S7 will be used on India’s future Small Satellite Launch Vehicle (SSLV). Using this motor, it will place its payload(s) just short of orbital velocity.

The fourth and final stage, PS4, is a small liquid-based stage on the rocket. This stage places its payload(s) into the desired orbits and houses the Reaction Control Thrusters (RCS) for the third/fourth stages. To power the fourth stage, two Monomethyl Hydrazine (MMH)/Mixed Oxides of Nitrogen (MON) L-2-5 engines are used to generate a max thrust of 15.2 kN. 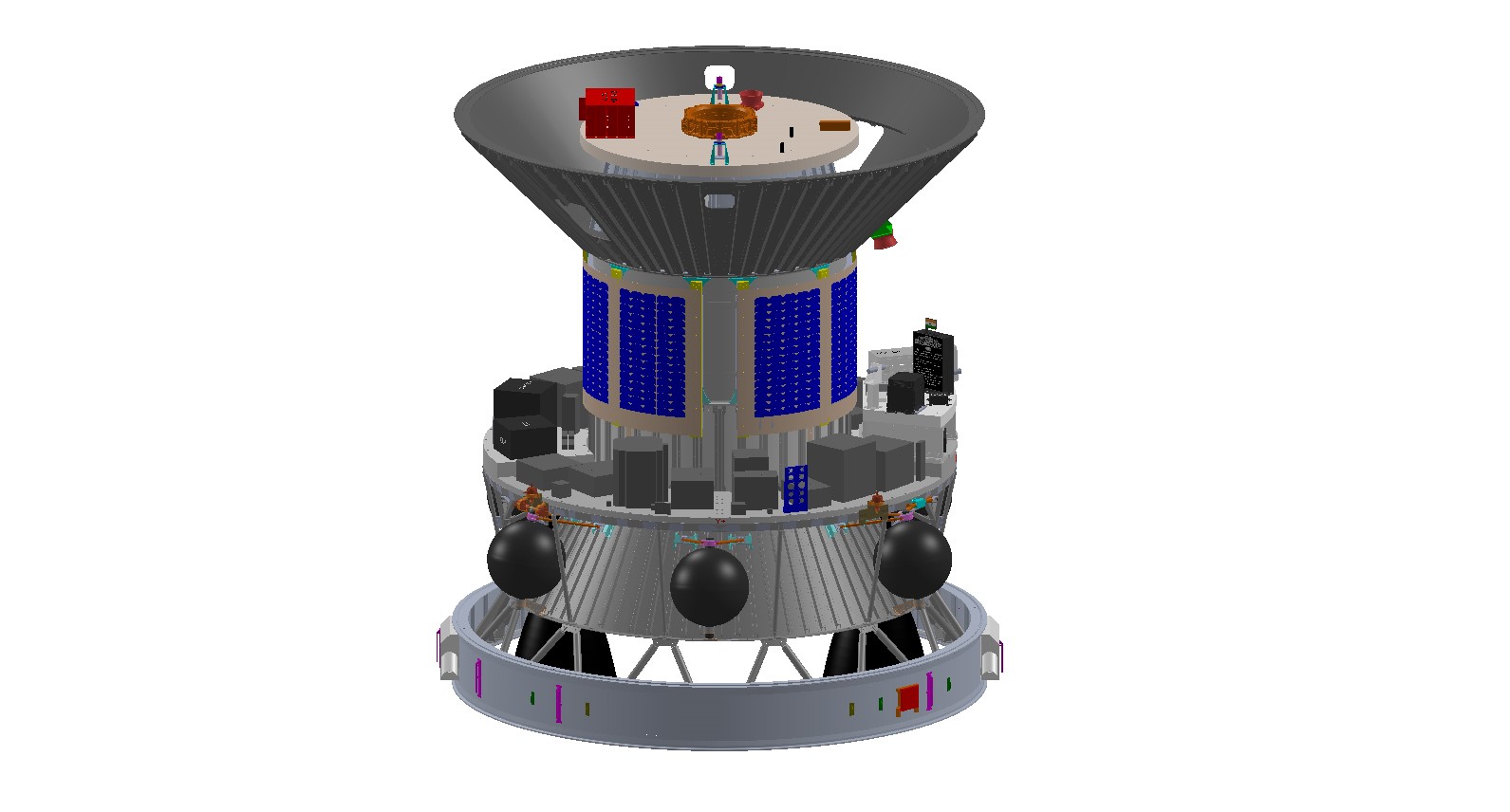 The largest payload on this flight is the DS-EO Singaporean Earth Observation satellite. DS-EO is an Electro-Optic multi-spectral payload to provide full-color images for humanitarian, land classification, and disaster relief needs. This satellite will mass 365 kg. The next payload is the NeuSAR Singaporean Synthetic Aperture Radar (SAR) Earth Observation satellite. NeuSAR is the first small Singaporean SAR satellite, designed to provide images in all weather conditions. This satellite has a mass of 155 kg.

The smallest separating payload is SCOOB-I, from Nanyang Technological University (NTU). SCOOB-I is the first satellite in the Student Satellite Series at NTU. While in orbit, it will be used as Singapore’s first heliophysics mission and aims to observe the sun in 18 wavelengths of light. From there, they can draw connections to how sunlight is absorbed by Earth’s atmosphere. This satellite has a mass of just 2.8 kg.

The last payload is the POEM activity. POEM will perform in-orbit scientific experiments using the PS4 stage as an orbital platform. This activity will test the PS4 as a possible platform to house experiments for long-term missions. For attitude stabilizations, it will use a dedicated GNC system. Multiple solar arrays and a lithium-ion battery will be used to power the stage. The navigation will be supported by four sensors, a magnetometer, gyros, and NavIC – an Indian satellite navigation system. Helium will be used for dedicated gas thrusters.

For this mission, POEM will carry six payloads.

PSLV-C53 is transferred from the assembly building to the launch pad a few days before launch. The final countdown for PSLV begins 25 hours before launch. With no cryogenic propellant, all fuels are loaded onto the rocket before the countdown begins.

At T-0, the S139 PS1 engine ignites, allowing the rocket to take flight. Shortly after liftoff, the vehicle begins a pitch maneuver to head in a southeast direction. 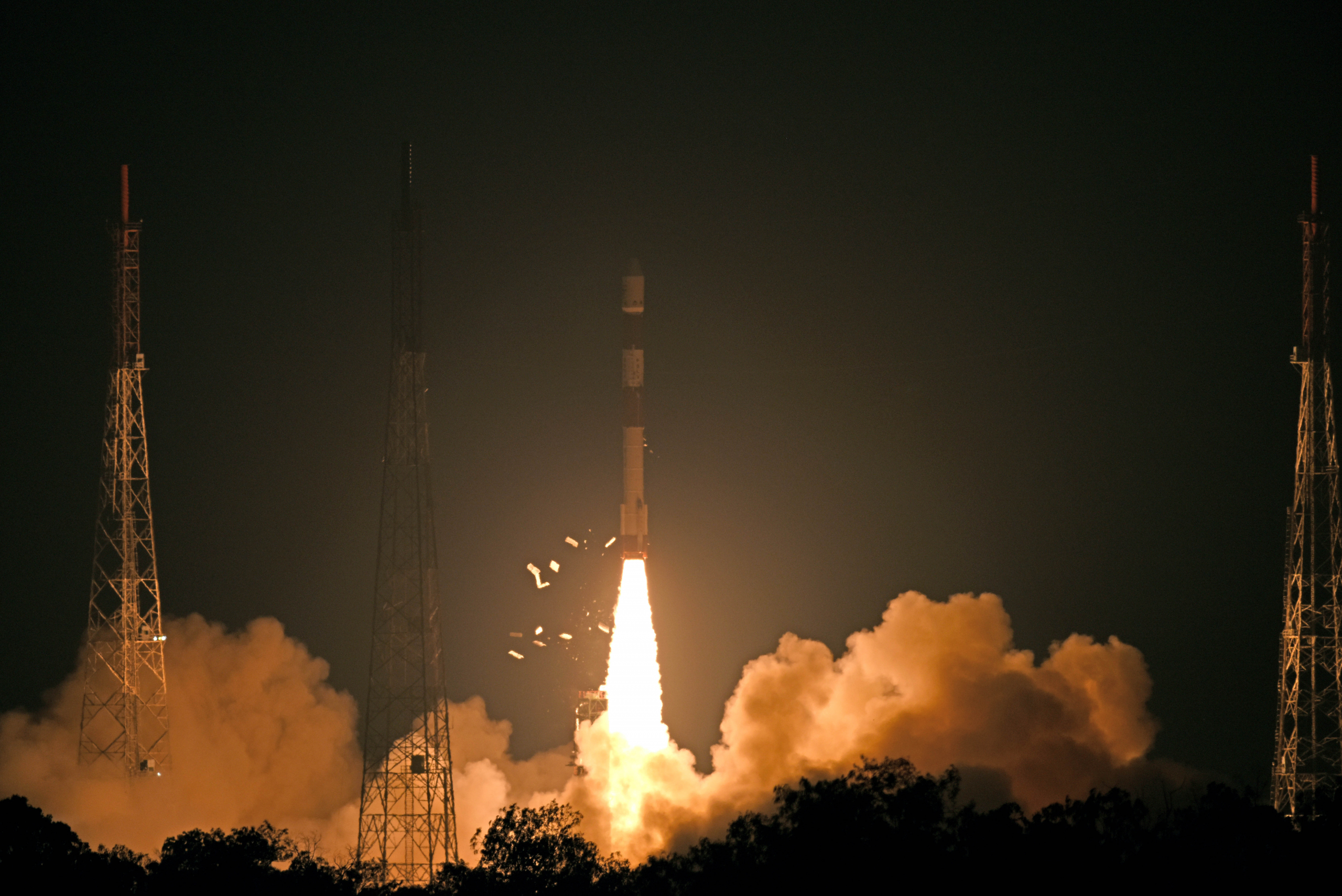 100 seconds later, at T+ four minutes 23 seconds, the second stage shuts down and separates from the third stage. A second later, the PS3 ignites. After it completes its 70-second burn, the PS3 burns out and PSLV will begin a short coast period. This coast will take PSLV to its apogee and PS3 will separate.

After another 10-second coast period, PS4 will ignite just after T+10 minutes into the flight. This burn will place PSLV and its payload into its target orbit of 570 km at 10 degrees. The burn will last over five minutes.

After PS4 shuts down, the stage will begin deployments of its three deployable payloads. Once the three payloads are deployed, PS4 will begin to “safe” itself and begin its POEM mission.

ISRO and NSIL still have many missions scheduled in the coming months. After PSLV-C53, the next mission is the maiden launch of the SSLV rocket. SSLV is India’s newest rocket and the first dedicated small satellite launcher. It is set to launch no earlier than (NET) August with the Earth Observation Satellite (EOS)-2 payload.

Following SSLV is the next PSLV mission with EOS-06 and multiple satellites. EOS-06 was originally supposed to launch on PSLV-C53, but due to payload delays, it moved to a future PSLV-CA flight. This flight will launch no earlier than September 2022. Two other launches include a PSLV-XL and the return to flight of the GSLV MK.II rocket.

(Lead photo: PSLV-C53 sits on the pad ahead of launch. Credit: ISRO)