News Astronomy > News > Here’s M74 Like You’ve Never Seen it Before, Thanks to Judy Schmidt and JWST

The JWST is grabbing headlines and eyeballs as its mission gains momentum. The telescope recently imaged M74 (NGC 628) with its Mid-Infrared Instrument (MIRI.) Judy Schmidt, a well-known amateur astronomy image processor, has worked on the image to bring out more detail.

M74 is a large spiral galaxy that holds somewhere in the neighbourhood of 100 billion stars. It’s about 32 million light-years away from us and is a great example of a Grand Design Spiral Galaxy. The JWST imaged the galaxy as part of the PHANG Survey. PHANG (Physics at High Angular resolution in Nearby GalaxieS) studies nearby galaxies in high resolution and is intended to “… understand the interplay of the small-scale physics of gas and star formation with galactic structure and galaxy evolution,” according to the PHANG website.

The survey uses several telescopes to study galaxies, but now that the JWST is operating, it’s making a huge contribution to the effort. 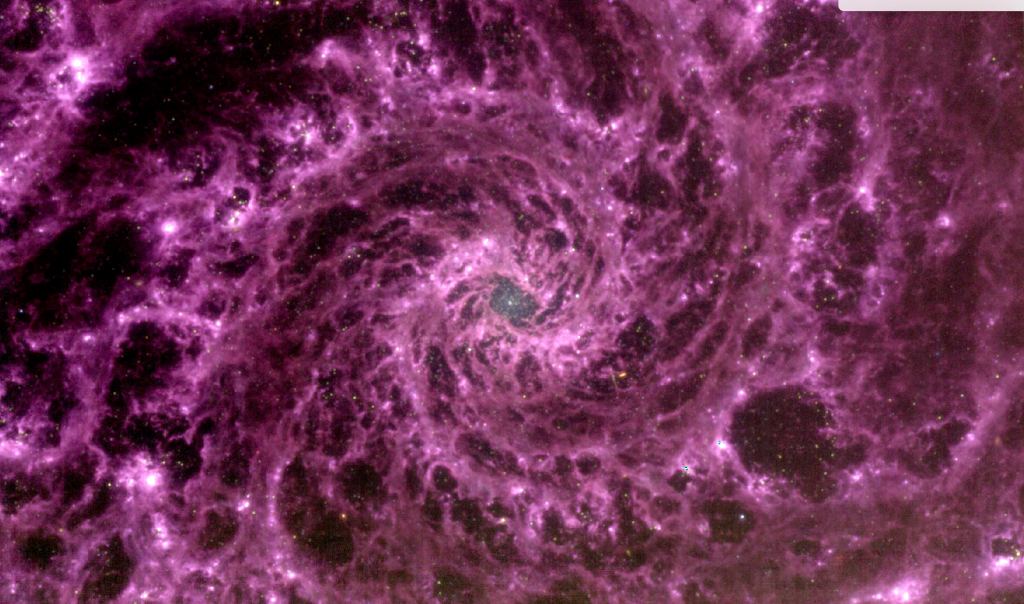 This is the original JWST image of M 74 that made the rounds on social media before Judy Schmidt processed it. Image Credit: NASA/ESA/CSA/STSCI

Judy Schmidt (Judy Schmidt@SpaceGeck on Twitter) is involved with the Planetary Society and is one of those rare people who looks at an astounding image from the JWST and thinks, “Hmmmm…Not bad, but I can improve it.” (We’re just kidding and don’t mean to speak for her.) But it does speak to her rare skill set.

In the image description on Judy’s Flickr page, she writes, “Squeezing some color out of the various filters showing all the glowing dust in the center of NGC628.”

She lists the filters as:

To understand the impact the JWST is having, compare a Hubble image of M74 to Judy’s processed JWST image. The Hubble image is a composite of the telescope’s Advanced Camera for Surveys data taken in 2003 and 2005.

On the left is a composite Hubble image of M 74 made with the space telescope’s Advanced Camera for Surveys. On the right is the JWST image processed by Judy Schmidt. Image Credit: (l) NASA, ESA, and the Hubble Heritage (STScI/AURA)-ESA/Hubble Collaboration;
Acknowledgment: R. Chandar (University of Toledo) and J. Miller (University of Michigan). (r) NASA/ESA/CSA/STSCI/JUDY SCHMIDT CC BY 2.0

This is Schmidt’s rework of the JWST image of Jupiter that the telescope captured in its commissioning phase. Image Credit: NASA/ESA/CSA/STSCI/JUDY SCHMIDT CC BY 2.0

“A very processed (maybe even over-processed) version of Jupiter from JWST,” Schmidt writes in her description. “Here, we’re viewing the planet only in infrared, and the ring, usually invisible, is plain for all to see. The colors are definitely unusual.”

“There is some discussion over what the red blip at the south pole and the disconnected layer of atmosphere on the eastern limb are. Real? Artifacts? We’ll wait for the scientists to figure it out, but I’m leaning toward real. :)”

The post Here’s M74 Like You’ve Never Seen it Before, Thanks to Judy Schmidt and JWST appeared first on newsastronomy.com.