When big spiral galaxies collide, they don’t end up as one really big spiral. Instead, they create a humongous elliptical galaxy. That’s the fate awaiting the Andromeda Galaxy and our Milky Way. They’ll tangle in a galactic dance starting in a few billion years. Want to know what it’s going to look like when the action starts? The Gemini North telescope in Hawai’i just released a stunning image of two galaxies like ours tangling it up. These are NGC 4568 and NGC 4567 and their interaction provides a sneak peek at our galactic neighborhood in the distant future.

The two galaxies Gemini caught a view of are well known to amateur astronomers as the Butterfly Galaxies. You need a good telescope and a long exposure to see them. When you do, you’ll be looking across about 40 million light-years of space in the direction of the constellation Virgo. That’s what Gemini North did, also. At this moment of cosmic time, we see these lovely spirals when they’re fairly far apart—about 20,000 light-years from each other. They still look fairly “normal”. However, as their interaction proceeds, their combined gravitational pulls will distort their shapes.

Nowadays, it’s fairly well-accepted that galaxies collide to form bigger ones. Such mergers are what built up the Milky Way, and it’s been part of mergers throughout its history. In fact, our galaxy continues to cannibalize smaller ones. This “hierarchical model” of galaxy formation explains the evolution of galaxies from their earliest formation.

When large galaxies collide, such as NGC 4568 and 4567, they commence a cosmic dance that takes millions of years to complete. The effects begin to happen as they draw near each other and show up as distortions in the outer “edges” of the galaxies. Eventually, these two will draw together and coalesce. Their gravitational forces will send shock waves across the spirals. That should trigger waves of star formation. As the merger continues, long streamers of stars and gas get pulled out across space.

The shapes of both galaxies will change as they pass by and through each other’s spirals over millions of years. Eventually, they’ll get so close together that they’ll merge and form a huge elliptical galaxy full of aging stars. There’ll be very little star formation happening in the new galaxy. That’s because all the gas and dust is used up or blown away.

So, the fate awaiting NGC 4568 and 4567 is a sneak preview of what will happen to our galaxy. In about 4.5 to 5 billion years, two interesting things will occur. First, our Sun will have evolved to become a red giant star. Earth may be no more. Or, it could be a wrinkled cinder after the red giant Sun expands and its atmosphere engulfs the inner planets. Presumably, humans will be long gone but hopefully will have moved to another planet somewhere.

From their new world (or worlds), future humans will see Andromeda huge and beautiful in the sky. What they probably won’t see (at least right away) is how Andromeda and the Milky Way will be tugging at each other. But, eventually, huge starburst knots created by the forces of the merger will light up the sky. There could be dozens of new clusters and constellations to watch. 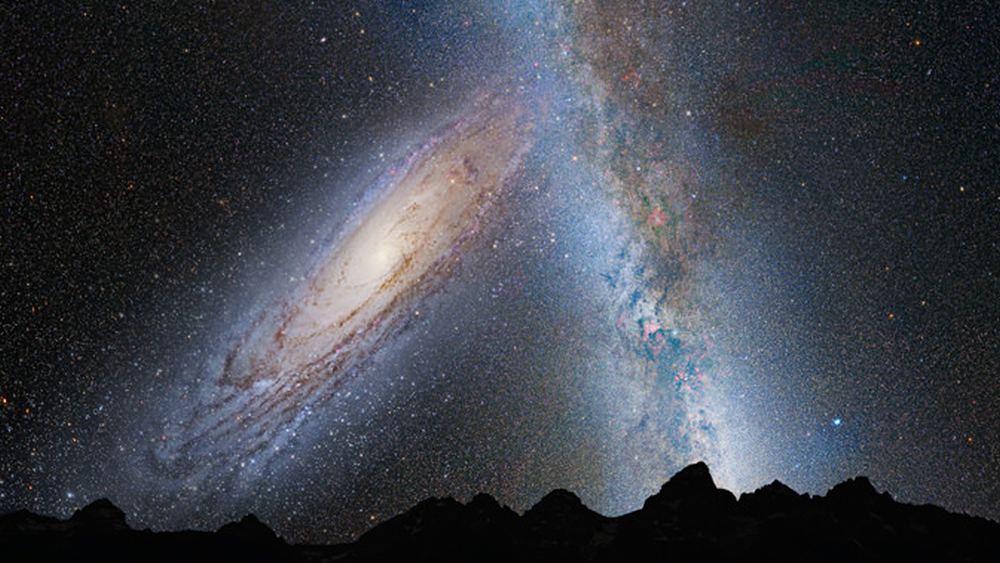 This illustration shows a stage in the predicted merger between our Milky Way galaxy and the neighboring Andromeda galaxy, as it will unfold over the next several billion years. In this image, representing Earth’s night sky in 3.75 billion years, Andromeda (left) fills the field of view and begins to distort the Milky Way with tidal pull. (Credit: NASA; ESA; Z. Levay and R. van der Marel, STScI; T. Hallas; and A. Mellinger)

There will be a mixing of the two stellar populations as the galaxies collide. It’s not too likely that individual stars will run into each other. However, there are predictions that some stars and their planets could be ejected from the scene.

The Milky Way and Andromeda will pass by each other a few times before the final merger takes place. At the end, a new galaxy will emerge. Astronomers have dubbed it “Milkdromeda”. It will likely contain a much more massive central supermassive black hole, a raft of new stars, and an elliptical shape. The familiar spiral shapes will be gone.

There are some predictions that Milkdromeda will, itself, merge with other galaxies in our Local Group over 150 billion years, creating a massive supergalaxy. That would be an amazing thing to see if anybody’s around to watch.

For now, however, we can see the prelude to Milkdromeda playing out 60 million light-years away, thanks to the Gemini North image of NGC 4568 and 4567. It was taken in 2020 and includes spectrographic data from the Gemini Multi-Object Spectrograph.

The post Here’s a Sneak Preview of What It’ll Look Like When the Milky Way and Andromeda Galaxies Collide appeared first on newsastronomy.com.