On the morning of Tuesday, July 12th, the world was treated to the first images captured by the James Webb Space Telescope – the most detailed images of the cosmos taken by the most powerful telescope ever! These featured familiar features from our galaxy, including updated images of the Carina Nebula, a nebula surrounding a stellar remnant (the Southern Ring), a collection of merging galaxies (Stephans Quintet), an exoplanet (WASP 96b), and a deep field image showing thousands of galaxies and gravitational lenses (SMACS 0723).

In anticipation of these images being released, a helpful space exploration ambassador shared a map that shows where these objects are located within (or in relation to) the Milky Way. The map was uploaded to the Reddit group Space on July 10th (two days before image release day) and is the work of data scientist Tony Rice (user name u/rtphokie). Rice describes himself as an “[information security] data scientist by day, @NASAJPL Ambassador… by night.” 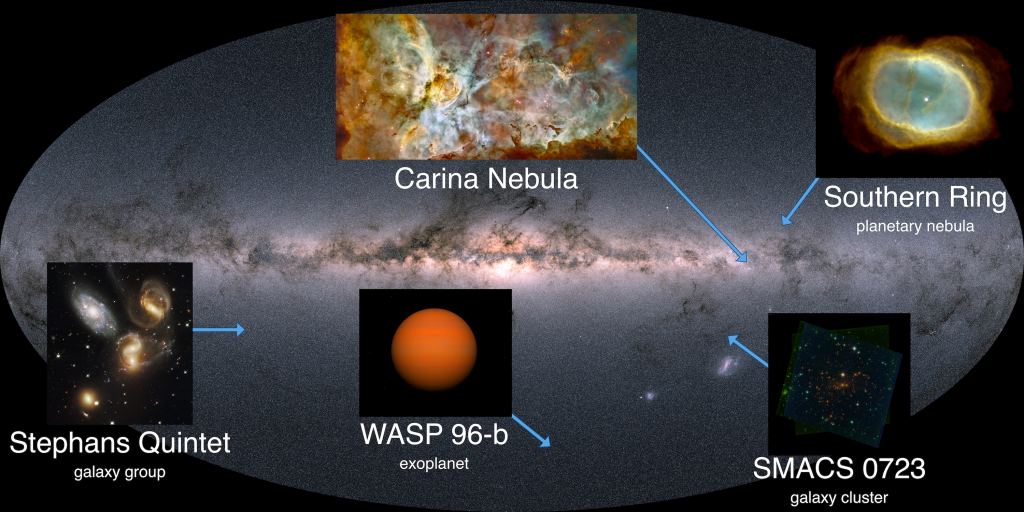 The location of the objects featured in the first images taken by James Webb. Credit: u/rtphokie/Reddit r/space

As you can see from the image above, the Milky Way background was obtained by the Gaia Observatory as part of the ESA’s Galaxy Survey. Released in 2018, this image was the most detailed look at our galaxy and included the proper motions and velocities of over 1.3 billion stars. The other images, as Rice explained, were either taken by the Hubble Space Telescope (James Webb’s predecessor) or are artistic renditions. You have to admit that the new images taken by the JWST have proven to be much more vivid and detailed. Rice anticipated as much, as he indicated in the comments section:

“[B]ase image is from the esa’s Gaia Galaxy Survey. Other images (except WASP 96-b which is an artist concept) are visible light images from Hubble. JWST’s infrared images should provide more much detail.”

Beyond their scientific value, what makes the JWST images so invaluable is how they engage amateur astronomers, citizen scientists, and good old-fashioned regular folk. They also encourage people to learn more about astronomy, science, and the technologies that allow us to explore beyond our planet. As always, looking to space inspires us to look further and contemplate the deeper questions, like “will humanity ever set foot on another planet?” “how did it all begin?” and “are we alone in the Universe?”

The post Here are the Locations in the sky for the First JWST Images appeared first on newsastronomy.com.