News Astronomy > News > Globalstar hush-hush ahead of launch with SpaceX

SpaceX raised a Falcon 9 rocket vertical on pad 40 Saturday in preparation for launch with the Globalstar FM15 satellite. Credit: SpaceX

Globalstar is set to add a spare spacecraft to its commercial data relay network early Sunday with a launch from Cape Canaveral on a SpaceX Falcon 9 rocket, but the satellite operator remained silent about the mission on the eve of liftoff.

SpaceX has announced the mission — first reported by Spaceflight Now — and plans to host a live webcast of the launch, which is set for 12:27 a.m. EDT (0427 GMT) Sunday from pad 40 at Cape Canaveral Space Force Station.

But Globalstar, the only acknowledged customer on the mission, has made no public disclosures about the launch of its spare satellite other than a statement in a quarterly financial report last month that said it planned to launch the backup spacecraft in the “near future.” At the time, the company did not identify the launcher for the spare satellite.

But SpaceX has confirmed it plans to launch the spacecraft, known as Globalstar FM15, from Cape Canaveral after midnight Sunday. Airspace warning notices indicate the Falcon 9 will head downrange to the northeast from Florida’s Space Coast, with SpaceX’s drone ship “Just Read the Instructions” in position about 400 miles (650 kilometers) downrange from Cape Canaveral.

The reusable booster flying on the Globalstar mission is tail number B1061, making its ninth trip to space. The launch early Sunday will cap a busy couple of days for SpaceX, as the company goes for its third Falcon 9 mission in roughly 36 hours.

Two Falcon 9s launched from the Kennedy Space Center on Friday and then Saturday from Vandenberg Space Force Base in California, hauling 53 Starlink internet satellites and a German radar reconnaissance spacecraft into orbit. Sunday’s mission will be SpaceX’s 26th launch of the year, matching the total number of Falcon 9 missions flown in 2020.

SpaceX accomplished 31 missions last year, the company’s current record for a calendar year. Officials are aiming for more than 50 Falcon 9 and Falcon Heavy flights this year.

There is a 70% chance of favorable weather for launch Sunday at Cape Canaveral, according to the U.S. Space Force’s 45th Weather Squadron. The only weather concern is with electrical fields and cloud cover left behind over Central Florida after afternoon and evening thunderstorms.

The launch Sunday will be the first for a Globalstar satellite since 2013, and adds capacity for the company’s commercial network providing voice and data connectivity for satellite phones, asset tracking, and internet-of-things applications. 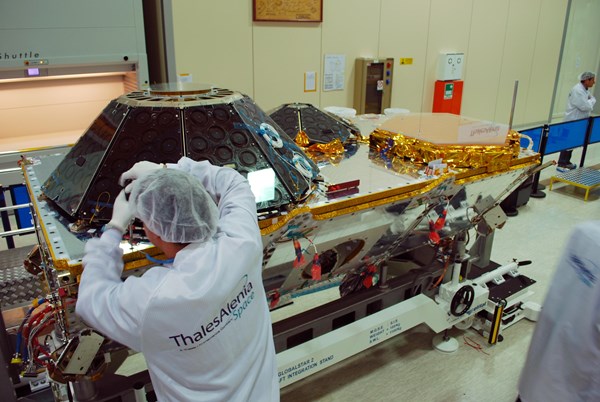 The Thales-built Globalstar satellite weighs about 700 kilograms, or 1,543 pounds. The Globalstar fleet orbits about 878 miles (1,413 kilometers) above Earth at an inclination of 52 degrees to the equator, an orbit reachable with a launch to the northeast from Cape Canaveral.

The mission profile for the Globalstar mission indicates the Falcon 9’s upper stage will burn its engine three times to inject the Globalstar FM15 spacecraft into the targeted orbit for deployment. Separation of the satellite is expected around 2:20 a.m. EDT (0620 GMT), nearly two hours after liftoff.

SpaceX did not mention any payloads that could be riding to orbit with the Globalstar FM15 satellite. The relatively light weight of the Globalstar satellite would typically leave enough propellant reserve on the Falcon 9’s booster to return to landing, but Sunday’s mission will feature a landing on SpaceX’s offshore recovery platform.

The Globalstar satellites provide data connectivity for customers between 70 degrees north and south latitude, and the company’s second-generation spacecraft are designed for operational lifetimes of 15 years. The Thales-built Globalstar satellites are trapezoidal in shape and feature 16 transponders in C-band and S-band and 16 receivers in L-band and C-band.

Globalstar is a competitor in the satellite phone and data relay market with companies like Iridium, Inmarsat, and Orbcomm. Globalstar announced in February it is purchasing 17 new satellites from an industry team led by MDA and Rocket Lab to extend the life of its constellation.

The company expects all of the 17 new satellites will be launched by the end of 2025. A launch service provider for the new satellites hasn’t been announced.

The $327 million contract for the 17 new satellites, along with the launch this month of Globalstar’s spare second-generation spacecraft, is being primarily funded by an unnamed “potential customer” for Globalstar’s services.