The last in a line of six satellites for the U.S. military’s Space Based Infrared System, or SBIRS, missile warning program is ready for launch Thursday from Cape Canaveral on top of a United Launch Alliance Atlas 5 rocket.

The $1.2 billion SBIRS GEO 6 satellite is buttoned up for liftoff inside the Atlas 5’s payload shroud as Lockheed Martin, the spacecraft’s manufacturer, ramps up work on a next-generation missile warning system under contract with the U.S. Space Force.

The Atlas 5 will be loaded with cryogenic liquid hydrogen and liquid oxygen propellants during the predawn hours Thursday, with the countdown culminating in liftoff during a 40-minute launch window opening at 6:29 a.m. EDT (1029 GMT), about 17 minutes before sunrise on Florida’s Space Coast.

There is a 70% chance of favorable weather for launch Thursday, according to the Space Force’s official forecast.

The SBIRS GEO 6 satellite is the final spacecraft in the SBIRS program, which includes platforms orbiting in geosynchronous orbit more than 22,000 miles (nearly 36,000 kilometers) over the equator and sensors flying in highly elliptical orbits with better coverage over polar regions.

The satellites carry infrared sensors to detect heat plumes from rocket exhaust, and provide the first warning of a missile launch that could be aimed at the U.S. homeland, allied nations, or deployed military forces.

“As the space domain has transitioned from a benign to a contested and congested environment, SBIRS GEO 6 provides another critical unblinking eye to detect, track and defend against ballistic and hypersonic missile threats, improving data gathering and battlespace awareness capabilities,” said Col. Brian Denaro, the U.S. Space Force’s program executive officer for space sensing. “This mission advances our capacity to detect missile launches earlier and track these targets more accurately.”

The SBIRS satellites in geosynchronous orbit, called the SBIRS GEO constellation, are built by Lockheed Martin. Northrop Grumman supplied the infrared sensors on each satellite.

The first SBIRS payload in an elliptical orbit launched in 2006, and the military launched the first SBIRS satellite into geosynchronous orbit in 2011. The SBIRS program replaced the military’s Defense Support Program, a series of 23 missile warning satellites launched between 1970 and 2007.

One of the infrared cameras on each SBIRS GEO satellite scans across the spacecraft’s coverage area in a U-shaped pattern. With a fleet positioned around the world, the SBIRS satellites and the remaining long-lived DSP satellites provide global coverage to detect missile launches. Another infrared sensor can be aimed at specific regions of interest.

“There’s a staring sensor that can be pointed at and stare at a fixed point,” said Michael Corriea, Lockheed Martin’s vice president overseeing the SBIRS program. “So for example, you can task it to look over China because there was something you maybe wanted to look at in a particular area, or North Korea.

“Both sensors are infrared sensors, so they detect the heat signature of the rocket, not only just the initial heat from the rocket launch, but also as the rockets go through the atmosphere, they get heated up and warmed and we can check them through that heat signature as well,” Corriea said.

“SBIRS GEO 6, as well as the other SBIRS satellites, basically has four missions,” Corriea said. “The first is missile warning. It’s got scanning and staring sensors that can see the Earth and detect a launch and then, using some algorithms, determine where that missile is going to land. So it’s able to do the missile detection and warning, and then inform the decision makers or people in the United States about an incoming attack to take appropriate actions.” 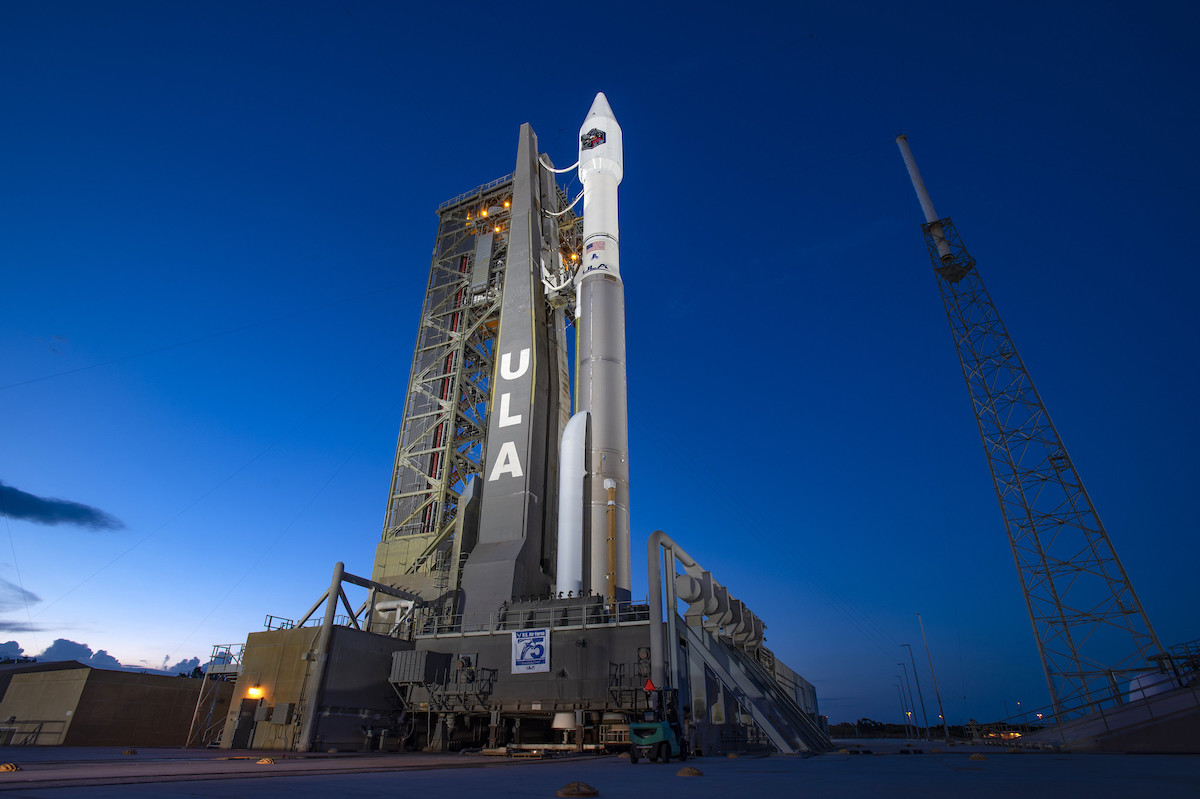 “As Russia and China and other nations build and test new missiles, the data from the (SBIRS) sensors can be collected on those new missiles and the intelligence community can do an analysis about what those missiles are, what their capabilities are, or how they work,” Corriea said. “And then the fourth and final portion of the SBIRS mission is it really helps with battlespace awareness. The cameras are sensitive enough to be able to take a look at the battlefield. That data can be provided to operators in the field, so that they can understand what’s going on and have improved awareness of the battlefield.”

The infrared sensitivity provided by the SBIRS satellites can also detect the thermal signature from objects as they re-enter the atmosphere and burn up. SBIRS infrared data has also been useful in detecting and locating wildfires.

The SBIRS GEO 6 satellite was built at Lockheed Martin’s manufacturing and test facility in Sunnyvale, California, and delivered to Cape Canaveral earlier this year for launch preparations. Once filled with maneuvering propellant for orbit-raising and station-keeping, the spacecraft weighs about 10,700 pounds (4,850 kilograms) in launch configuration.

The SBIRS GEO 6 mission will mark the ninth and final flight of an Atlas 5 rocket in the 421 vehicle configuration, and the 95th Atlas 5 launch overall. ULA is phasing out the Atlas 5 rocket and the Delta 4 rocket family. Both rockets will be replaced by the new Vulcan Centaur launcher, which ULA says is less expensive and more capable than the Atlas and Delta rocket fleets.

The Vulcan Centaur will also be powered by U.S.-made main engines produced by Blue Origin, replacing the Russian RD-180 on the Atlas 5. There are 22 Atlas 5 missions left on ULA’s launch backlog, including the SBIRS GEO 6 mission this week. ULA say all of the RD-180 engines required for the remaining Atlas 5 flights have been delivered to the United States from Russia.

On Thursday’s mission, the two solid-fueled boosters and the rocket’s Russian-made RD-180 main engine will combine to generate about 1.6 million pounds of thrust a liftoff, propelling the Atlas 5 launcher east from Cape Canaveral over the Atlantic Ocean. The boosters will burn out and jettison at T+plus 2 minutes, 13 seconds.

The SBIRS GEO 6 spacecraft will use an on-board propulsion system to steer itself to a circular geosynchronous orbit that is continuously at an altitude of nearly 22,300 miles over the equator. In that orbit, the satellite’s velocity will be fixed with the rate of Earth’s rotation, giving the craft’s infrared early warning sensors a constant view of the same part of the planet.

The satellite is designed for a 12-year mission. SBIRS GEO 5, which launched last year, and SBIRS GEO 6 are based on an upgraded Lockheed Martin “combat bus” design that is more hardened against cyber threats, offers additional spacecraft power, and has enhanced propulsion and electronic systems.

ULA trajectory analysts developed a modified launch profile for the SBIRS GEO 6 mission to place the satellite into an orbit closer to its final operational altitude and inclination. That additional third firing by the RL10 engine, made possible by shortening the Centaur upper stage’s first burn, will result in lower fuel usage on the SBIRS GEO 6 satellite during its own orbit-raising maneuvers.

That translates to a longer operating lifetime and gives the SBIRS GEO 6 spacecraft the ability to use its fuel to move to different geographic coverage zones around the world. 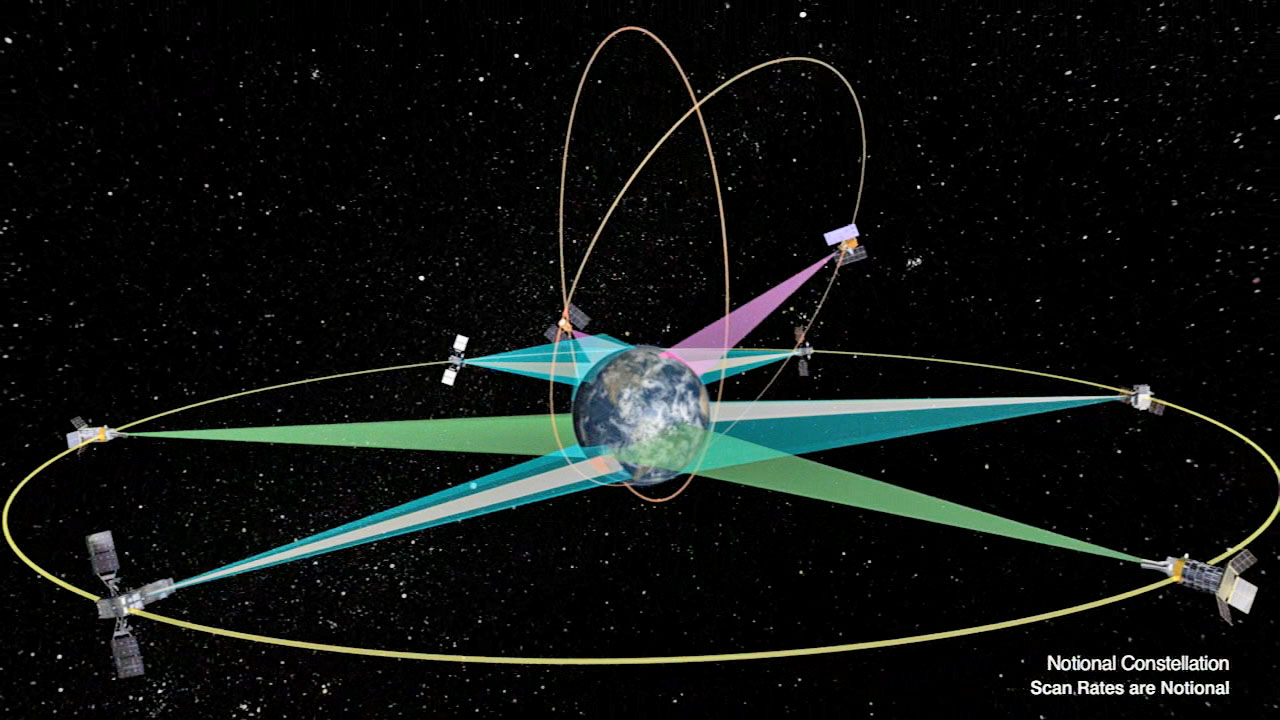 An artist’s concept of the DSP and SBIRS constellation. Credit: Lockheed Martin

With the Space Force’s fleet soon to have six SBIRS satellites in geosynchronous orbit, plus an unspecified number of aging DSP satellites, officials said the missile warning network is in good shape until a new generation of infrared sensing platforms is ready for launch.

With overlapping coverage around the world, multiple SBIRS or DSP satellites can often detect and track a missile, giving military operators a better of idea if its trajectory.

“We have satellites that are up there, and when it’s absolutely optimized is when we have stereo coverage, in other words there’s overlapping coverage,” said Col. Daniel Walter, senior materiel leader for Space Systems Command’s strategic missile warning acquisition program. “When you get multiple looks at a single launch, it really helps with the accuracy and assuredness of (tracking) that launch.”

The Space Force has contracted with Northrop Grumman to build two OPIR satellites to launch into highly elliptical polar orbits to provide missile warning coverage over the North Pole.