The first words of the book of Genesis make a declarative statement. God created Heaven and Earth, and thus begins the cosmic story. While not all creation myths have an act of beginning, most do. Humans are storytellers, and we like stories with a beginning. This origin need is deep within us and is even part of our scientific worldview. As is so often said in science, effects have causes. This cause and effect process is a powerful tool for understanding the world around us, but it’s not without its problems, particularly with the origin of the universe.

In the standard model of cosmology, the universe begins with a big bang. An initial hot dense state from which our modern universe arose. Technically, that means that we can trace cosmic history back to a big bang. But if effects have causes, then what caused the big bang? What existed before the universe? The short answer is we don’t know.

For some that leaves the door open for a divine creator. A Great Pumpkin who lies outside of time and space. But it could also be asking what existed before the universe is a nonsensical question, like asking what is north of the north pole. Although effects within the universe have causes, the universe as a whole may not have or need one. But that answer doesn’t feel very satisfying. 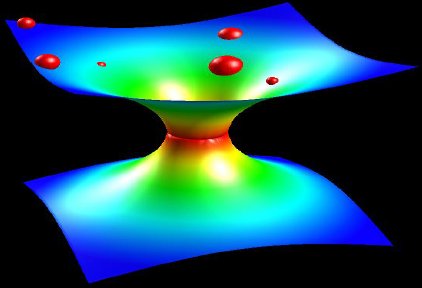 There is, however, an alternative. It’s known as the cyclic universe model, and it argues that our current observable universe is part of a series of universes. Our universe is currently expanding because of the Hubble parameter, and if that parameter stays constant it will expand forever. But if the Hubble parameter is cyclic, then the universe will start contracting at some time in the future. It will contract until it reaches a new hot dense state. A new big bang for a new universe.

The Wheel of Time turns, and Ages come to pass…

A cyclic universe needs no beginning. It always was, always is, and always will be. But the model isn’t without its problems. One of the main ones is the problem of entropy. Entropy is a measure of disorder in a system, and according to the laws of thermodynamics can never decrease. In a simple cyclic universe model, the entropy of any given universe must be at least a little greater than its parent universe. So if universes cycle to an infinite past, the current universe would have infinite entropy, which it doesn’t. So there must have been some initial universe with low entropy, and we’re back to the beginning.

There is a way to get around this problem. The universe could have an overall scale factor. If that scale factor increases with each universe, then the entropy problem goes away. What’s interesting is that this scale factor is conformally invariant. This means it doesn’t change how the universe appears. Each universe might be twice as big as the previous one, but everything within that universe scales by the same factor. If you double the income of everyone on the planet, but also double the cost of everything, then nothing has really changed.

This conformally invariant scale factor allowed the cyclic universe to exist without a beginning. Each universe has a cause, and it’s turtles all the way down. But a new study has found a flaw in this idea. The team looked at the mathematical structure of cyclic universe models within general relativity and found that all of them are geodesically past-incomplete. In other words, within the bounds of general relativity, you cannot trace a universe like ours back through an infinite cycle of universes. There may have been a vast number of universes before ours, but there must still have been a first universe.

There are neither beginnings nor endings to the Wheel of Time. But it was a beginning.

So the cyclic universe model can provide a cause for our universe, but it only kicks the problem of beginnings down the road. Even if our universe wasn’t the first, some universe was. At least for the usual cyclic universe models. As the authors point out, their work doesn’t apply to Conformal Cyclic Cosmology proposed by Roger Penrose. In that model, the scale of each universe is infinitely larger than the cycle before. The authors plan to look at that model next.

And thus begins a story for another time.

The post Even a Cyclical Universe Needed to Come From Somewhere appeared first on newsastronomy.com.