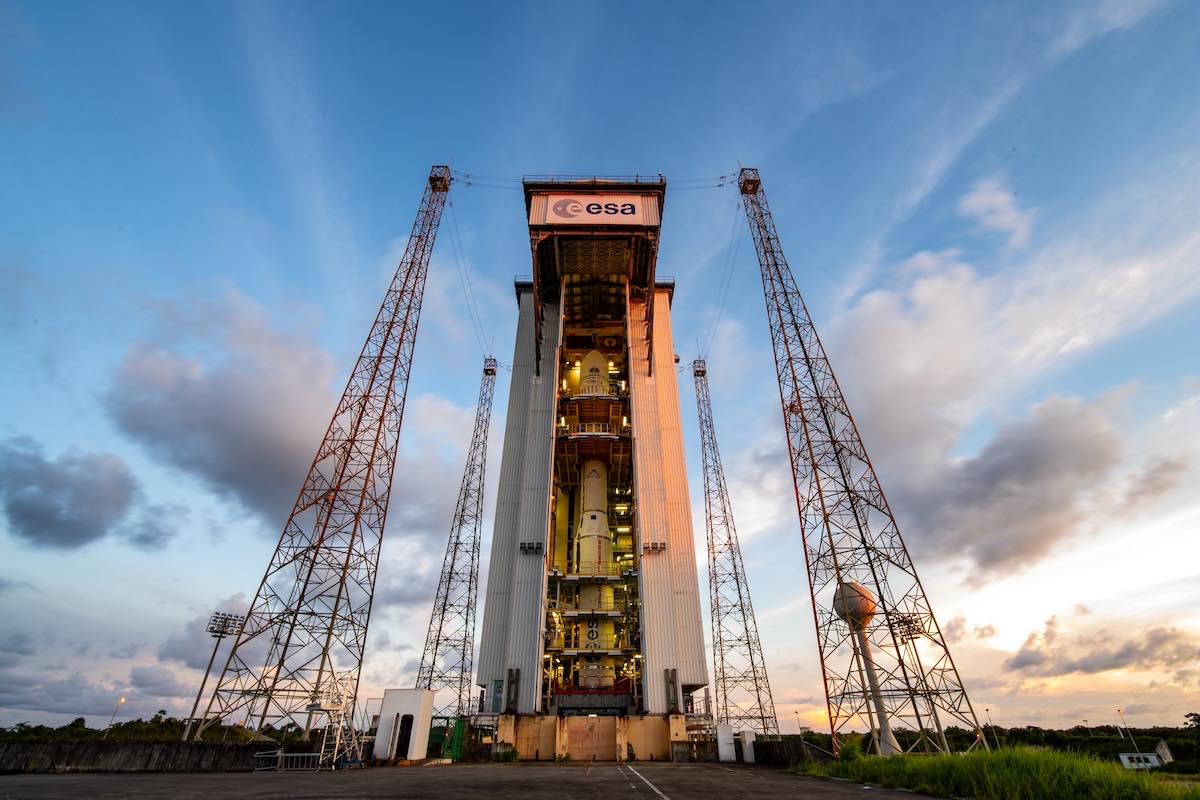 The first Vega-C launcher inside its mobile gantry at the Guiana Space Center in South America. Credit:
ESA-Manuel Pedoussaut

Europe’s new Vega-C launcher, debuting more powerful rocket motors and a larger payload volume, is set to lift off on its first flight Wednesday from Kourou, French Guiana, to cap more than seven years of development.

The Vega-C is an upgraded version of the European Vega launcher, which has flown 20 times since an inaugural test launch in February 2012.

“As with all maiden flights, there is a lot of tension and a lot of effort from all the teams,” said Stefano Bianchi, head of the flight programs department at the European Space Agency, which manages the Vega-C development in partnership with prime contractor Avio, an Italian aerospace company.

The new rocket design replaces the Vega’s solid-fueled first and second stages with wider, heavier motor casings. The third stage motor is unchanged, and the restartable liquid-fueled fourth stage has the same type of engine but carries more propellant.

The first 114-foot-tall (34.8-meter) Vega-C rocket — about 16 feet (5 meters) taller than the previous Vega rocket — is scheduled to lift off at 7:13 a.m. EDT (1113 GMT; 8:13 a.m. French Guiana time) Wednesday with an Italian research satellite and six small CubeSats, beginning a flight sequence lasting more than two hours until deployment of the final payload.

European officials conceived of the Vega-C program nearly a decade ago, and ESA member states approved the Vega-C for development in December 2014. At the same time, European governments greenlit the heavier Ariane 6 rocket, a cheaper, more flexible alternative to the Ariane 5.

The Vega and Ariane 5 rockets are slated for retirement, with the Vega-C and Ariane 6 expected to become mainstays in Europe’s rocket fleet for the coming years. The Ariane 6’s first launch is scheduled in 2023, a three-year delay from its original schedule.

With the propulsion upgrades, the Vega-C is capable of hauling up to 5,070 pounds (2.3 metric tons) of payload mass to a 435-mile-high (700-kilometer) polar orbit, an increase over the 3,300-pound (1.5-metric ton) capacity of the basic model of the Vega rocket.

The first stage of the Vega-C is named the P120C, an enlarged, higher-thrust, longer-burning rocket motor than the P80 first stage flown on the previous version of Vega.

Heading northeast from the Guiana Space Center Wednesday, the P120C first stage motor will burn 2 minutes, 26 seconds, about a half-minute longer than the P80 used on previous Vega rockets. The Vega-C’s booster stage will produce a million pounds of thrust — compared to 680,000 pounds of thrust on the Vega rocket.

European engineers designed the Vega-C — the “C” is for “consolidation” — to share a key component with the Ariane 6 in an attempt to capture cost savings from economies of scale. The P120C first stage on the Vega-C, made by a 50-50 joint venture between Avio and Ariane Group, is the same design as the strap-on boosters that will fly on the Ariane 6 rocket, in groups of two or four depending on the mission requirements.

The Vega-C’s second stage, the Avio-made Zefiro 40, is the other motor to be upgraded from the previous Vega configuration. The wider Zefiro 40 replaces the Vega’s Zefiro 23 motor, adding 50% more solid propellant to the second stage motor and generating 293,000 pounds of thrust.

The Zefiro 9 third stage produces 70,000 pounds of thrust, the same as the previous Vega rocket, and will burn out nearly seven minutes after liftoff.

The Vega-C’s upper stage, called the AVUM+, will take over the mission to place the mission’s main payload into an unusual orbit about 3,661 miles (5,893 kilometers) above Earth at an inclination of 70 degrees to the equator.

The AVUM+ upper stage is a modified version of the Attitude Vernier Upper Module flown on earlier Vega rockets, with additional propellant capacity and the ability to support longer-duration operations in orbit. The heavier booster motors on the Vega-C, coupled with the changes to the upper stage, allow the new version of the Vega rocket to haul more massive payloads to a range of different altitudes and inclinations. This capability is useful for missions to deploy small satellites into constellations, or rideshare flights with numerous small payloads needing to launch into slightly different orbits, officials said. 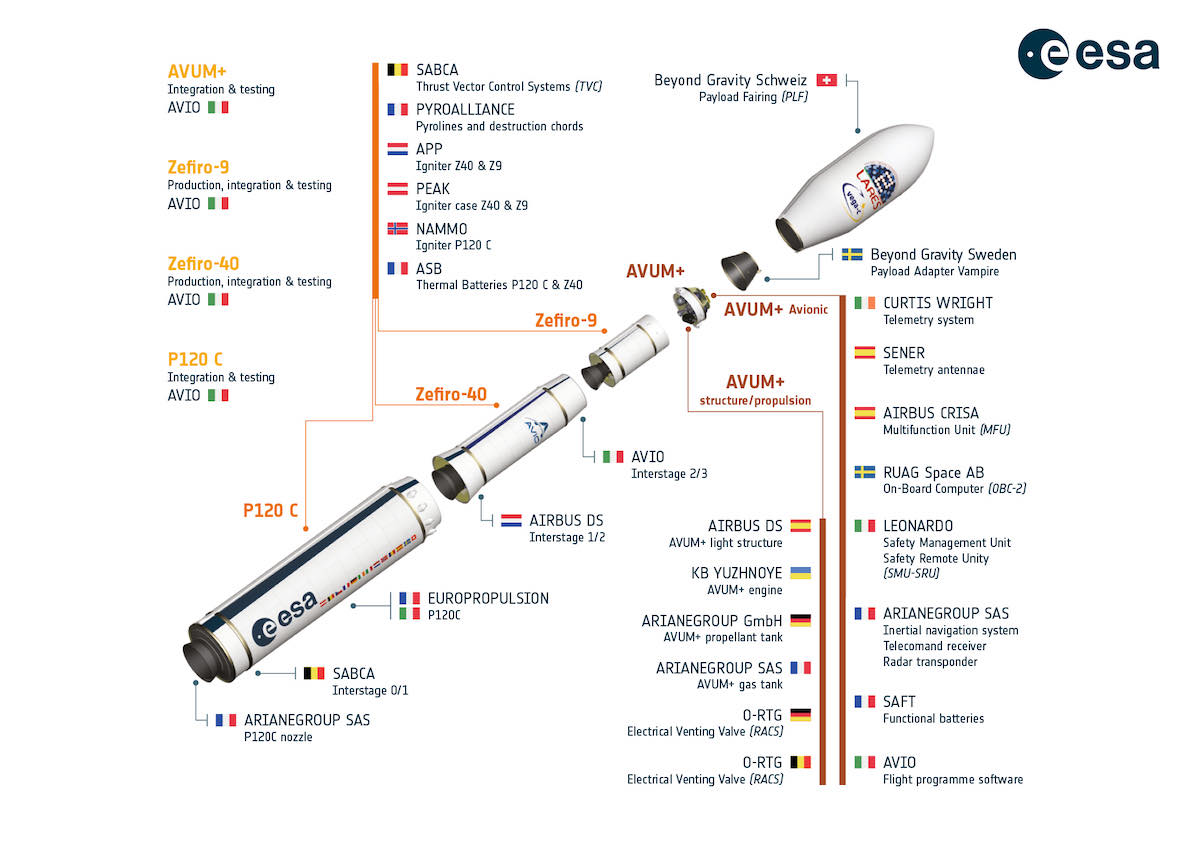 Italy leads a consortium of 13 European Space Agency member states on the Vega-C program. This illustration labels major contributions to the Vega-C rocket from contractors in different parts of Europe. Credit: ESA-J. Huart

The Vega upper stage’s engine is the RD-843, a hydrazine-fueled thruster manufactured by Yuzhmash in Ukraine. Russia’s invasion of Ukraine has raised concerns about the supply of RD-843 engines for future Vega missions, but Bianchi said July 7 that teams have stockpiled Ukrainian engines in the Vega factory and cooperation with Ukraine is continuing, covering short-term and medium-term launches.

Bianchi said ESA wants to maintain Ukraine’s role in the Vega program. “They have been, so far, a very reliable partner,” he said.

For the long term, ESA and Avio are working on a next-generation version of the Vega rocket called the Vega-E, which could be ready to fly in the mid-2020s. The Vega-E will replace the hydrazine-fed AVUM engine with a European-made methane-fueled engine.

Bianchi said the Vega-C program has cost about 300 million ($300 million) to design, develop, and prepare for its first launch, which was expected in 2018 when ESA member states approved the program.

Technical issues and delays caused by two Vega rocket failures in 2019 and 2020 pushed back the debut of the Vega-C. The COVID pandemic also contributed to the delay, Bianchi said.

Once the Vega-C maiden flight is complete, Arianespace will begin commercial operations of the new rocket. The French launch service provider oversees Ariane and Vega launch operations in French Guiana.

According to Bianchi, there are 14 Vega-C missions planned through 2025 for European government missions and commercial customers.

This illustration shows the differences between the basic Vega launcher, the Vega-C, and the next-generation Vega-E. Credit: ESA

The main payload on the Vega-C test flight is LARES 2, an Italian spacecraft designed to help fine-tune an elusive measurement of a central tenet of Albert Einstein’s theory of general relativity.

Carved out of a single ball of nickel, LARES 2 is covered with 303 laser retroreflectors, allowing a network of ranging stations around the world to track the spherical satellite in orbit.

By bouncing laser signals off reflectors on LARES 2, scientists can precisely compute its position in space. After comparing the actual location of LARES against predictions, researchers can measure the frame-dragging effect, part of Einstein’s theory of general relativity which states that a rotating mass can distort space-time around it.

The LARES 2 mission is managed by the Italian Space Agency, or ASI, with contributions from Italy’s National Institute for Nuclear Physics and the University of Rome. The spacecraft is 16.7 inches (42.4 centimeters) across, and weighs about 650 pounds (295 kilograms).

The satellite is entirely passive, with no propulsion or on-board electronics. The high density of LARES 2’s structure makes it well suited for testing general relativity predictions, according to mission officials.

LARES 2 will join three similar Italian satellites in orbit for laser tracking. Italy’s two LAGEOS satellites launched on a Delta rocket and on a space shuttle mission in 1976 and 1992, and remain in orbit. The first LARES satellite launched on the inaugural Vega rocket flight in 2012, and is also still in space.

There are six CubeSats on the Vega-C rocket from institutions in Italy, France, and Slovenia. Here are their descriptions from ESA:

• AstroBio will test a solution for detecting biomolecules, a technology which could help monitor astronauts’ health and search for signs of life during planetary exploration missions.

• Greencube carries an experiment to grow plants in microgravity, along with sensors and an internal camera to monitor the health of these “microgreens.”

• MTCube-2 will expose different types of flash memory to the space radiation environment while monitoring errors and broadcasting messages to the Ham radio community.

• Celesta will study electronic system short-circuits caused by energetic particles and compare the radiation environment in orbit with that produced at CERN’s CHARM radiation chamber.

• ALPHA will explore phenomena related to Earth’s magnetosphere, such as the Northern and Southern Lights, and demonstrate technologies designed to mitigate the effects of radiation.