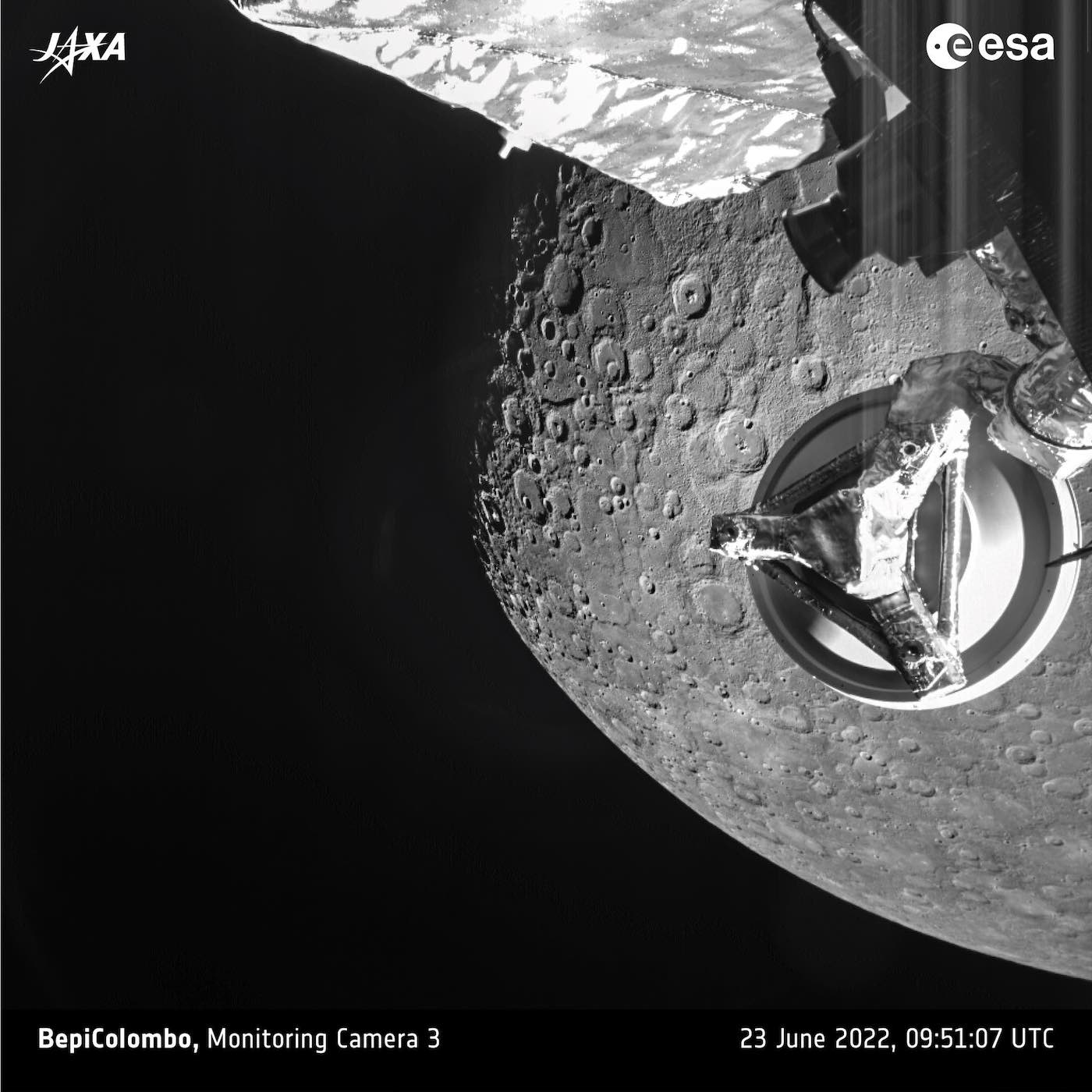 A monitoring camera on ESA’s BepiColombo mission captured this black-and-white view of a heavily cratered region on Mercury during a June 23 flyby. Volcanic plains are also visible in this image, which was captured from a distance of 873 miles (1,406 kilometers) from Mercury. Credit: ESA/BepiColombo/MTM

Following a first pass last year, the European-Japanese BepiColombo mission flew by Mercury again Thursday for a gravity assist to continue reshaping its course, setting up for a maneuver in 2025 to settle in an orbit around the planet closest to the sun.

The BepiColombo spacecraft snapped photos of Mercury during the flyby Thursday, offering scientists tantalizing glimpses of the rugged, cratered landscape the mission will observe and study later this decade.

“Mercury flyby 1 images were good, but flyby 2 images are even better,” said David Rothery of the Open University, who leads the European Space Agency’s Mercury surface and composition working group. “The images highlight many of the science goals that we can address when BepiColombo gets into orbit. I want to understand the volcanic and tectonic history of this amazing planet.”

BepiColombo’s three black-and-white monitoring cameras and several of the mission’s magnetic, plasma and particle monitoring instruments collected data during the flyby Thursday, which took the spacecraft about 120 miles (200 kilometers) from Mercury’s surface at 5:44 a.m. EDT (0944 GMT).

The robotic mission flew closest to Mercury over the nighttime part of the planet. BepiColombo’s monitoring cameras started taking pictures about give minutes after closest approach, at a range of about 500 miles (800 kilometers) from Mercury, and recorded imagery for about 40 minutes, according to ESA, which operates the mission from a control center in Darmstadt, Germany.

BepiColombo raced by Mercury at a relative velocity of nearly 16,800 mph (7.5 kilometers per second), ESA said. As the spacecraft zoomed outbound from Mercury, the monitoring cameras looked back at the planet toward the region separating day and night, where rugged topography cast long shadows across the airless landscape. 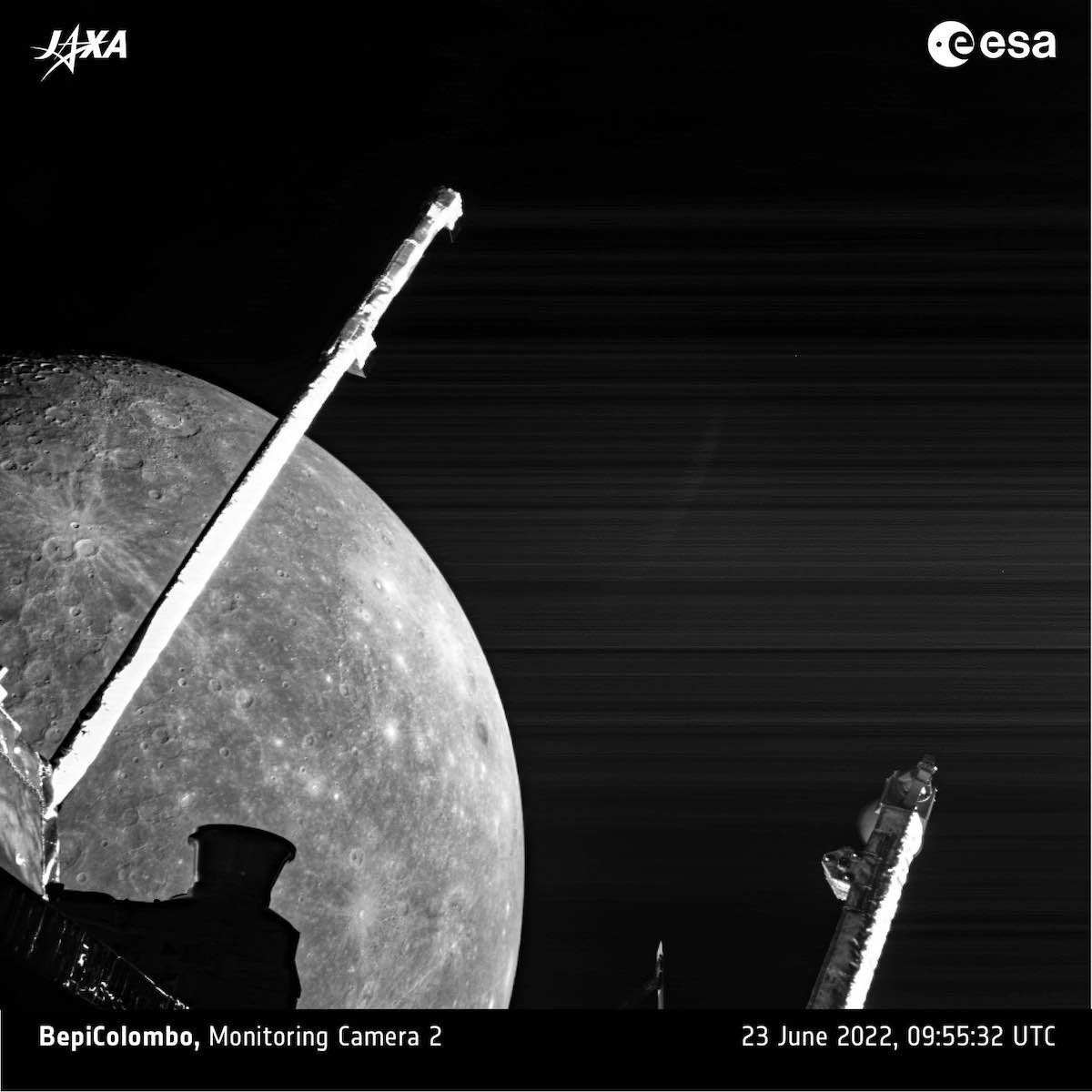 Mercury’s Caloris basin is the bright region near the planet’s limb in this image captured by a monitoring camera on the BepiColombo mission. Caloris measures around 960 miles (1,550 kilometers) across, and is the largest well-preserved impact basin on Mercury. Parts of BepiColombo’s planetary orbiter spacecraft, including its magnetometer boom, are visible in the foreground. Credit: ESA/BepiColombo/MTM

Mercury’s largest well-preserved impact basin, called Caloris basin, entered the view frame of BepiColombo’s cameras. This region was previously observed by NASA’s MESSENGER spacecraft, which orbited Mercury from 2011 until 2015, but was not imaged by BepiColombo when it first visited Mercury last October.

While scientists were eager to analyze images and data collected during Thursday’s encounter with Mercury, the primary purpose of the flyby was to use the planet’s gravity to continue adjusting BepiColombo’s path around the sun. BepiColombo launched on an Ariane 5 rocket from French Guiana in 2015, then performed a gravity assist flyby with Earth and two flybys of Venus in 2020 and 2021.

The mission visited Mercury last October for the first of six encounters to gradually step down BepiColombo’s orbit around the sun, bleeding off speed to set up for a maneuver Dec. 5, 2025, to steer the spacecraft into orbit around Mercury itself.

This graphic shows the BepiColombo mission’s schedule of planetary flybys before entering orbit around Mercury in 2025. Credit: ESA

The flyby Thursday was intended to slow BepiColombo’s velocity by about 2,900 mph (1.3 kilometers per second) relative to the sun. More Mercury flybys are scheduled in June 2023, September 2024, December 2024, and January 2025, leading up to the late 2025 arrival at Mercury to stay.

The MPO and MMO elements are stacked together with a solar power and propulsion section, or transfer element, for BepiColombo’s interplanetary cruise.

The transfer module will jettison shortly before BepiColombo enters orbit around Mercury. The planetary orbiter will fire thrusters to brake into orbit, then release the Japanese spacecraft to begin its own science mission.

BepiColombo’s European-built science orbiter will map Mercury and study the planet’s geologic history, while the Japanese part of the mission will observe the solar wind’s influence on Mercury. 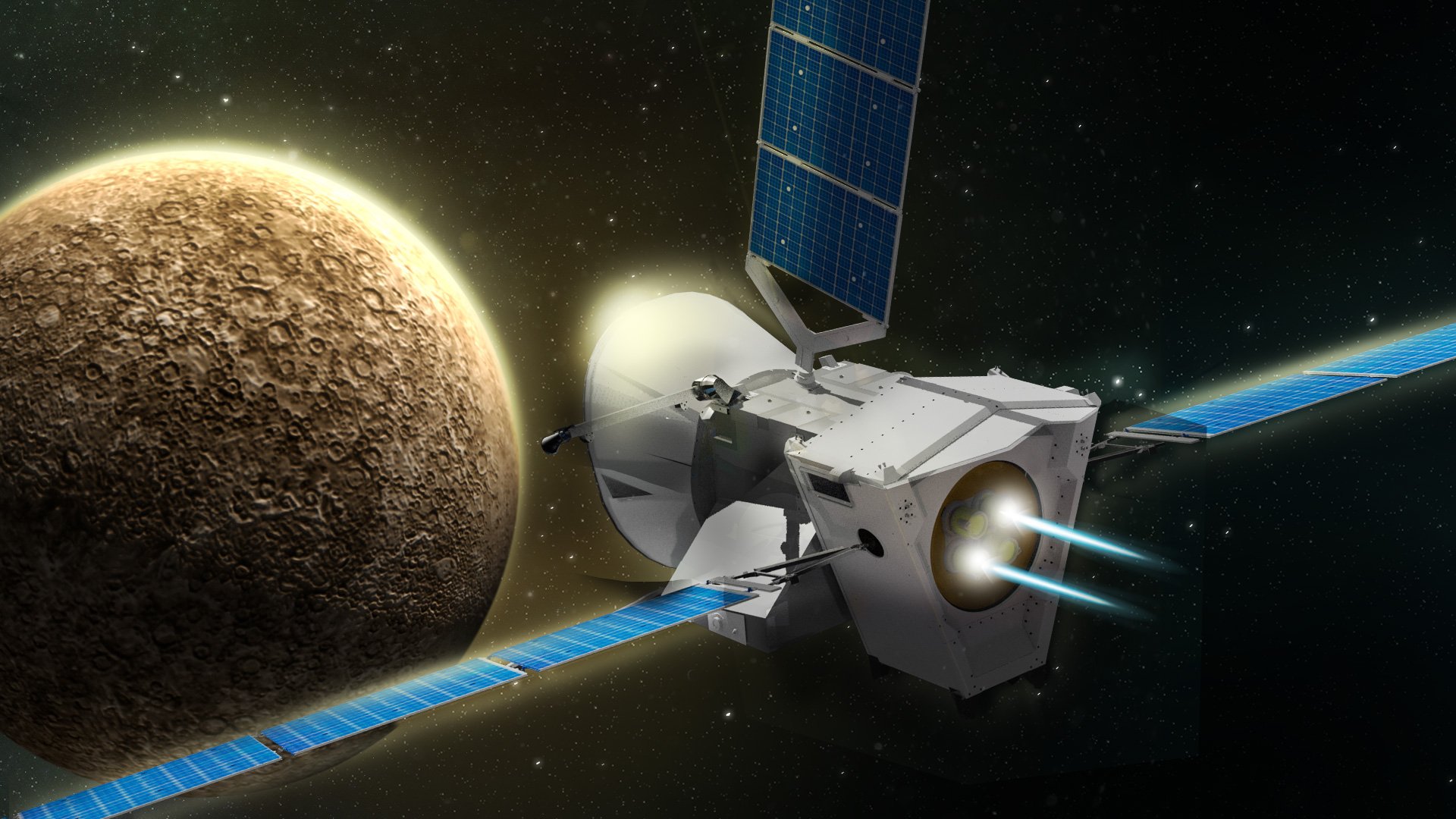 Artist’s concept of the BepiColombo spacecraft in its cruise configuration. Credit: Airbus Defense and Space

The European orbiter’s main high-resolution color science camera was not active during Thursday’s flyby. Its field-of-view is blocked during the cruise phase of the mission by the Japanese spacecraft, and the camera will only be able to image Mercury after final arrival in late 2025.

“Our instrument teams on both spacecraft have started receiving their science data and we’re looking forward to sharing our first insights from this flyby,” said Johannes Benkhoff, ESA’s BepiColombo project scientist. “It will be interesting to compare the data with what we collected on our first flyby, and add to this unique dataset as we build towards our main mission.”