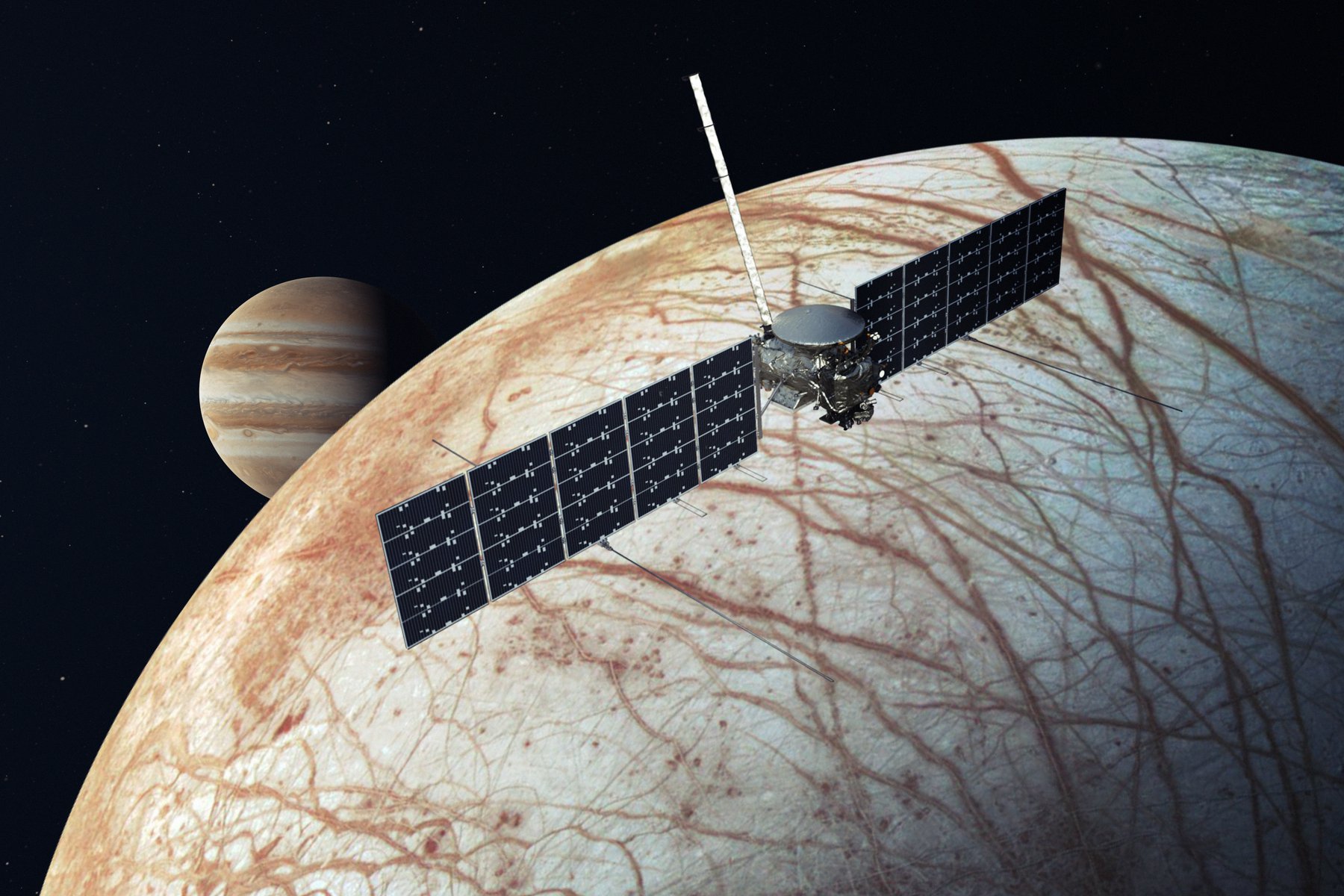 “It’s an exciting time for the whole project team and a huge milestone. This delivery brings us one step closer to launch and the Europa Clipper science investigation,” said Europa Clipper project manager Jordan Evans of JPL.

However, the arrival of Europa Clipper’s main body at JPL now allows engineers and technicians to complete the construction of the spacecraft, which is set sometime in the next two years.

Europa Clipper’s main body is large, measuring three meters tall and 1.5 meters wide, and is constructed of aluminum. Additionally, the main body is cylindrical in shape and is already integrated with many electronics, radios, thermal loop tubing, cabling, and propulsion systems which are set to be used during the course of its nearly 10-year-long mission at Jupiter. 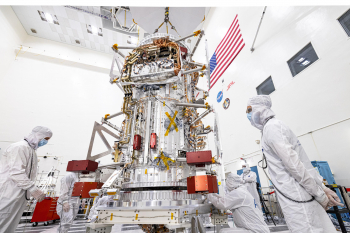 What’s more, when Europa Clipper’s solar arrays and other deployable systems are fully extended, the spacecraft will be as large as a basketball court — making Europa Clipper the largest spacecraft NASA has ever developed for a planetary science mission.

The main module itself is two aluminum cylinders stacked on top of one another. Each cylinder is dotted with threaded holes that will be used to attach Europa Clipper’s instruments and other spacecraft systems.

Another system attached to Europa Clipper’s main body is its web of connectors and electrical wires. Called the harness, there are more than 640 meters wires and connectors, weighing 68 kilograms.

Europa Clipper’s heavy-duty electronics vault will carry some of the major electronics needed for the mission and is designed to withstand the immense radiation of Jupiter and its surrounding moons. It will be integrated with the main module alongside some of the mission’s science instruments at JPL.

The spacecraft’s 24 engines will be used to perform mission-critical maneuvers when traveling to and while at Jupiter.

“Our engines are dual-purpose,” said JPL’s Tim Larson, the deputy project manager. “We use them for big maneuvers, including when we approach Jupiter and need a large burn to be captured in Jupiter’s orbit. But they’re also designed for smaller maneuvers to manage the attitude of the spacecraft and to fine tune the precision flybys of Europa and other solar system bodies along the way.”

The main body of Europa Clipper was designed and developed by the Johns Hopkins Applied Physics Laboratory (APL) in Laurel, Maryland, in partnership with JPL and the Goddard Space Flight Center.

Now that the main body is at JPL, engineers will continue to work on and prepare the main module for final testing and launch.

“What arrived at JPL represents essentially an assembly phase unto itself,” said Evans. “Under APL’s leadership, this delivery includes work by that institution and two NASA centers. Now the team [at JPL] will take the system to an even higher level of integration.”

Europa Clipper is currently set to launch in October 2024, pending successful construction and testing of the spacecraft. Following a launch atop a SpaceX Falcon Heavy, the spacecraft will spend five and a half years traveling out to Jupiter, where it will then insert itself into orbit and begin its four year science mission. Over those four years, Europa Clipper will perform nearly 50 flybys of Europa.

During each of these flybys, the spacecraft will take high resolution imagery of the icy moon’s surface and perform detailed investigations of Europa’s unique characteristics.

Evidence so far analyzed from other observations indicate the presence of a large subterranean ocean on Europa, containing twice the amount of water as Earth’s oceans. What’s more, conditions in this internal ocean may currently be suitable for supporting life.

In fact, one of Europa Clipper’s main science objectives is to study and confirm that this massive ocean exists.

All of these instruments will study Europa’s surface, atmosphere, and interior characteristics, providing information that can be used to gauge the depth and salinity of Europa’s ocean, the thickness of its icy surface crust, and potential plumes that could be ejecting water from its ocean into space, much like Enceladus does at Saturn.

Many of Europa Clipper’s instruments have already been assembled, shipped, and delivered to JPL and are awaiting integration onto their respective locations on the spacecraft. This phase of development, known as assembly, test, and launch operations, has been underway since March 2022.

By the end of 2022, much of — if not all of — Europa Clipper’s flight hardware and instruments are expected to be completed and shipped to JPL.