More than half a billion years ago, Earth experienced an almost-complete collapse of its magnetic field. It began in the early Cambrian period. Then, after a period of about 15 million years, the field began to grow again. The cause of that collapse and the bounceback of the field was a mystery. Then, a group of geologists studied rocks from Oklahoma that were created during that time. Magnetic markers in the rocks’ minerals pointed toward an event that began some 550 million years ago. That was before the introduction of multicellular life on our planet.

Look Deep into the Core

To understand what happened, look at our planet’s structure. Most of us learn in school that Earth is composed of layers. There’s the crust, where you’re sitting reading this right now. Underneath that is the mantle, Earth’s thickest layer. It lies over the molten outer core, which surrounds the solid inner core. That inner core has two parts—an outermost inner core and an innermost inner core. The core region lies some 2900 kilometers beneath the surface. The swirling action of liquid iron in the outer core is what generates our magnetic field. If it weren’t for that activity, we wouldn’t have a protective shield against the solar wind. In fact, without it, our planet might be more like Mars today. 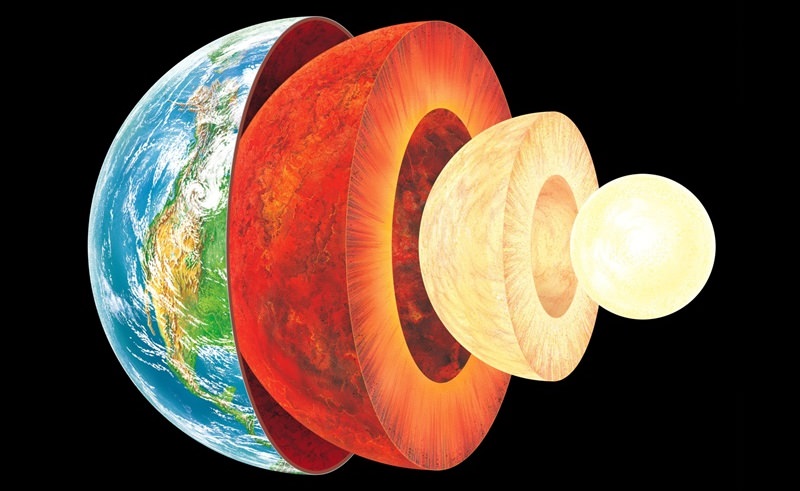 The Earth’s layers, showing the Inner and Outer Core, the Mantle, and Crust. Credit: discovermagazine.com

So, what happened in the core? Why did our magnetic field fade to almost 10 percent of its strength and then regenerate again? According to John Tarduno, a professor of geophysics at the University of Rochester in New York, the cause was the formation of Earth’s solid inner core.

In a recent paper, Tarduno and a team of researchers cited crucial dates in the inner core’s history. They also gave a precise age estimate for the collapse and regeneration. Since they can’t reach down into the core and directly observe it, how did they figure out when these events happened? The team turned to paleomagnetism to find an answer. That’s the study of magnetic markers in rocks that were created when the rocks formed. Geologists often use this to trace the records of other changes in Earth’s magnetic field, such as pole-flipping.

Earth’s magnetic field stretches out from the core through the mantle and crust and out into space. It’s impossible to measure the magnetic field inside Earth directly. That’s due to the location and extreme temperatures of materials in the core. So, geologists thought of a better way. They looked for paleomagnetic markers in rocks and minerals that rose to the surface. Those markers are like tiny needles that lock in the direction and intensity of the magnetic field that existed when the minerals cooled after forming.

Tarduno and his team wanted to pinpoint the age and growth of Earth’s inner core using paleomagnetism to measure those particles. So, they used a CO2 laser and a superconducting quantum interference device (SQUID) magnetometer to analyze feldspar crystals from the rock anorthosite and study their perfect magnetic markers.

By studying the magnetism locked in those ancient crystals, the researchers determined two new important dates. The first was when the magnetic field began to strengthen after nearly collapsing 15 million years earlier. That rapid regrowth was due to the formation of a solid inner core. It actually recharged the molten outer core and restored the magnetic field’s strength.

A depiction of Earth, first without an inner core; second, with an inner core beginning to grow, around 550 million years ago; third, with an outermost and innermost inner core, around 450 million years ago. University of Rochester researchers used paleomagnetism to determine these two key dates in the history of the inner core, which they believe restored the planet’s magnetic field just before the explosion of life on Earth. (University of Rochester illustration / Michael Osadciw)

Another interesting thing happened about 450 million years ago. That’s when the growing inner core’s structure changed. The result was a boundary between the innermost and outermost inner core. Far above the core, changes to the mantle took place due to plate tectonics on the surface.

Paleomagnetism made this new understanding of Earth’s core possible, according to Tarduno. “Because we constrained the inner core’s age more accurately, we could explore the fact that the present-day inner core is actually composed of two parts,” he said. “Plate tectonic movements on Earth’s surface indirectly affected the inner core, and the history of these movements is imprinted deep within Earth in the inner core’s structure.”

What about Magnetic Fields Elsewhere?

The team’s research into paleomagnetic clues to Earth’s interior evolution provides clues about the history and evolution of our planet. It also offers insight into how it became habitable. Finally, their work has implications for understanding the evolution of other planets in the solar system. Things could well be very different if they had no magnetic fields. For example, Mars once had a magnetic field, but it dissipated more than 4 billion years ago. That left the planet vulnerable to the solar wind and likely played a role in the loss of Martian oceans. 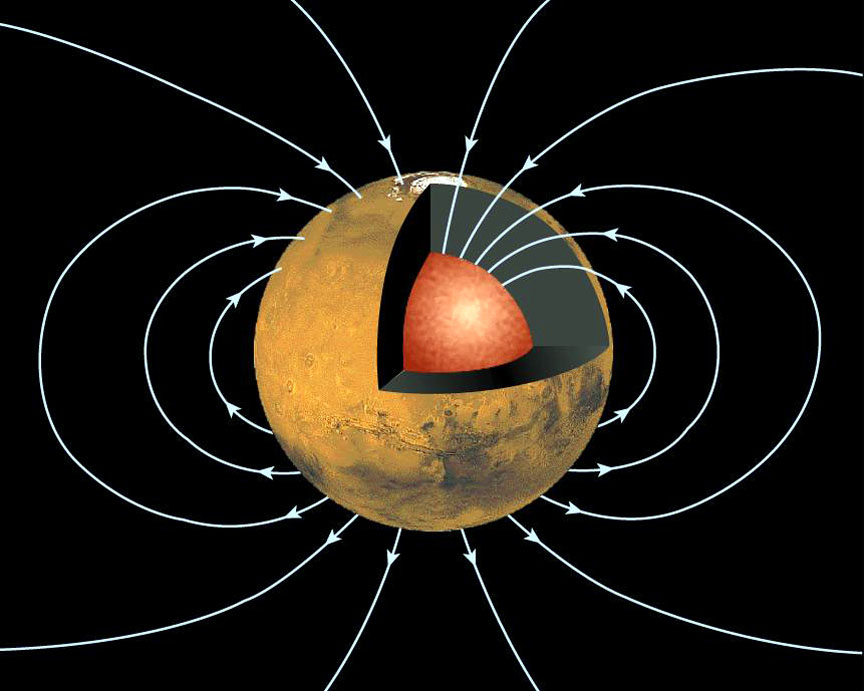 This figure shows a cross-section of the planet Mars revealing an inner, high-density core buried deep within the interior. Dipole magnetic field lines are drawn in blue, showing the global scale magnetic field associated with dynamo generation in the core. Ancient Mars must have had such a field, but today it is not evident. Perhaps the energy source that powered the early dynamo has shut down. Credit: NASA/JPL/GSFC

It’s not clear if Earth would have suffered the same fate if its magnetic field hadn’t regenerated. Tarduno said that our planet would have lost a lot of its water if the magnetic field had not come back. “The planet would be much drier and very different than the planet today,” he pointed out. “This research really highlights the need to have something like a growing inner core that sustains a magnetic field over the entire lifetime—many billions of years—of a planet.”

How did Earth avoid a Mars-like fate? Ancient rocks hold clues
Early Cambrian renewal of the geodynamo and the origin of inner core structure