Ask astronomers about dark matter and one of the things they talk about is that this invisible, mysterious “stuff” permeates the universe. In particular, it exists in halos surrounding most galaxies. The mass of the halo exerts a strong gravitational influence on the galaxy itself, as well as on others in the neighborhood. That’s pretty much the standard view of dark matter and its influence on galaxies. However, there are problems with the idea of those halos. Apparently, some oddly shaped dwarf galaxies exist that look like they have no halos. How could this be? Do they represent an observationally induced challenge to the prevailing ideas about dark matter halos?

In the so-called “Standard Model” of cosmology, shells or halos of dark matter protect galaxies from the gravitational influence of nearby galactic neighbors. However, when astronomers at the University of Bonn and Saint Andrews in Scotland looked in the nearby Fornax Cluster, which lies some 62 million light-years away from us, they saw something strange. It contains a number of dwarf galaxies with distorted, perturbed shapes. This is odd, especially if they should be surrounded by dark matter halos. 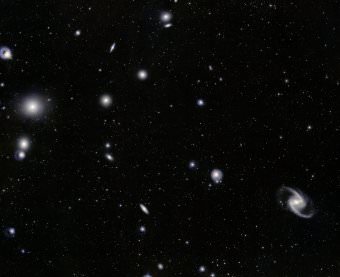 Let’s take a quick look at dwarf galaxies. They’re small and faint and usually found riding along in galaxy clusters or near much larger companions. The Milky Way Galaxy has a coterie of dwarf galaxies around it,. It is, in fact, cannibalizing ones such as the Sagittarius Dwarf Spheroidal. Interestingly, recent studies show that at least one of the dwarf galaxies near ours, an ancient one called Tucana II, has an astoundingly massive dark matter halo.

So, what’s happening in Fornax that’s different? There, dwarf galaxies could be “disturbed” by gravitational tides from nearby larger ones in the cluster. Tides happen when gravity from one body pulls differently on different parts of another body. These are similar to tides on Earth when the Moon pulls more strongly on the side of Earth that faces it.

The distorted shapes of the dwarf galaxies seen by the team indicate a problem with our understanding of dark matter. “Such perturbations in the Fornax dwarfs are not expected according to the Standard Model,” said Pavel Kroupa, Professor at the University of Bonn and Charles University in Prague. “This is because, according to that model, the dark matter halos of these dwarfs should partly shield them from tides raised by the cluster.”

Kroupa and Ph.D. student Elena Ascencio analyzed observations of the perturbed dwarfs in Fornax. They wanted to understand the extent of gravitational distortions these galaxies show and what causes them. The expected levels of distortion depend on a couple of factors. One is the internal characteristics of the dwarf galaxy. In addition, their distance to the center of the cluster is important. That’s where gravitational influences are much stronger. As a rule, galaxies with large sizes but not many stars could be easily disturbed by strong gravitational tides. The same is true for galaxies closer to the core of the cluster.

The team members compared what they saw in the cluster with observations made by the VLT Survey Telescope at the European Southern Observatory. Asencio pointed out that what they found seems to point to problems with the Standard Model. “The comparison showed that, if one wants to explain the observations in the standard model,” she said, “the Fornax dwarfs should already be destroyed by gravity from the cluster center even when the tides it raises on a dwarf are sixty-four times weaker than the dwarf’s own self-gravity.”

Not only is this counter-intuitive, she said, it also contradicts previous studies. The team also found that the force needed to disturb a dwarf galaxy is about the same as its self-gravity.

What Does This Mean for the Standard Model?

The research team points out that it’s difficult to explain these perturbed, disturbed shapes of the dwarf galaxies in Fornax if they’re surrounded by dark matter. In other words, they shouldn’t be misshapen if they do have halos. Yet, there they are with disturbed-looking shapes. That means that there are no dark matter halos around those galaxies.

Obviously, if what the astronomers found is confirmed, then the Standard Model needs some tweaking. And, there is at least one alternative explanation for the strange galaxy shapes. It’s called the MOND model (short for Modified Newtonian Dynamics). It suggests that Newton’s law of universal gravitation should be modified to account for the observed properties of galaxies. It could be applied to explain why misshapen galaxies look the way they do.

According to Hongsheng Zhao, a member of the research team from the University of Saint Andrews, finding disturbed dwarfs without dark matter halos is a major challenge to the current view. It states that galaxies have halos. It appears not all of them do, he points out. “Our results have major implications for fundamental physics,” he said. “We expect to find more disturbed dwarfs in other clusters, a prediction which other teams should verify”.